When I landed in Gothenburg, Sweden, a city with charm, there was an almost perpetual dreary cloud, that hung over the old blue trams and slick cobblestone streets which felt smooth under my feet.

The gloom gave the atmosphere a simple beauty and made the bright colors around the city pop out distinctly. I fell in love with the sound of trams pulling away and pigeons taking flight.

That night I checked into Scandic Europa, a perfectly located and elegantly minimalistic hotel right near the Nils Ericson bus terminal.

I dined at restaurant Atelier— a cozy restaurant on the 4th floor in Hotel Pigalle, where everyone drank wine except for jet-lagged me, who opted for water.

A rough breeze buffeted my sweater and tossed my hair, as it rushed through the narrow alleyways, and carried the scent of the sea to the city.

I leaned back against the adobe wall of the coffee shop behind me, and inhaled the aromatic atmosphere, before I tore another chunk from the ginormous cinnamon bun I got at a cafe close to central station. 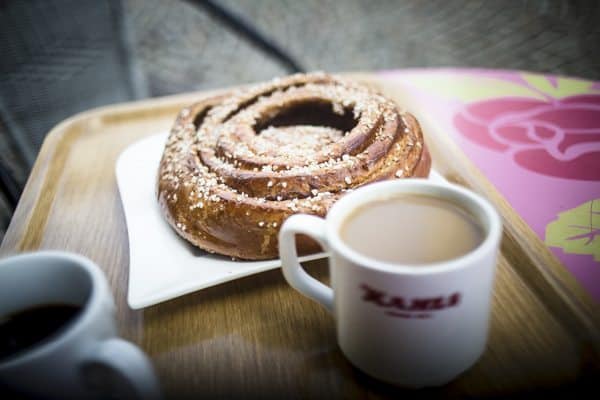 I was sitting in a narrow square enjoying ‘fika’, a traditional Swedish coffee break, with an old fashioned toy store across the street, and steam from a coffee drifting on the wind.

While at first glance Gothenburg seemed like a cut-and-paste European city, after I dug a little deeper.

I found hidden shops, quaint restaurants, and an exquisite local flavor of industrialized hipsters and shop owners who care deeply about their craft; like Nicklas Ericsson, an expert ice cream maker who owns Rada Gelato and has made ice cream into a science.

“I’m more interested in what’s going on in ice cream shops in America and London (than in Italy or Sweden),” he said, “because they have no traditions, and so they go crazy and experiment.”

He featured flavors like peanut butter gelato and mango with a unique twist — not the typical gelato you’d find in an ice cream shop in Sweden.

The ice cream was followed by a stop at Vera & Ruth Smakfulla Delikatesser, where I tried locally produced cheese and meats — the owners, Vera and Ruth, run a quiet, out of the way shop with an old-fashioned vibe; a family tradition passed down through the decades.

For lunch, I ate at Rawfoodbaren, a raw foods restaurant that served vegan, and notably delicious dishes that didn’t taste like I expected them to.

They flavored them with spices, and experimented with texture; even as a consumer who doesn’t normally eat vegan, I greatly enjoyed the food.

Next, my guide Jesper Adolfsson (book his tour here), who worked in finance before he stumbled into food tourism, brought me to Lakrits, a traditional Swedish candy shop that specializes in Swedish licorice, which is covered in salt.

“If you feel like someone is enjoying themselves you feel a bit proud,” he said, as he affectionately described Gothenburg as “the little brother to Stockholm,” and said that often, people don’t know where to look to find the best city hotspots, and so they go to bigger cities without seeing what there is to offer.

Gothenburg: The Doorstep to Nature

“Gothenburg is the doorstep to the entire region,” said Emelie Persson, Press Officer for the West Sweden Tourist Board; and she’s right: although sometimes it doesn’t feel like it, the coast is only about 45 minutes by public transportation from the city center.

The next day I took tram 11 from Central Station to Stalthomen, to catch the ferry to the islands of the Gothenburg Archipelago.

After 15 minutes on the old tram that creaked in all the right ways, the urban streets gave way to suburban sprawl, where children rode bicycles and got on and off without supervision. At the end of the wharf, I found Ferry 281, headed for Vrango island, which is all-bicycles and doesn’t allow cars.

When I wandered through the island suburb, I was struck by the warm sense of community, and the slowness of life.

Peaceful: that’s what it felt like; children running to meet their parents on the ferry ride home; wind rustling through the sawgrasses; bicycles left in the driveway.

At the wharf, fishing boats were returning after the day’s work, and residents sat around picnic tables talking.

It was a throwback to a time that’s only a distant memory to most of the Western world; a time when community and relationships mattered more than work.

I caught a ferry to Styrso Skaret, the next island over (of about 20 islands), where I borrowed an old, rickety bike from the hotel and restaurant Pensionat Styrso Skaret , and peddled up a trail through the woods to an overlook.

The islands stretched out before me, quietly resting in the setting sun, as I rested near the gravesite of an ancient king. The islands are rich with a history that has produced a peaceful culture that revolves around fishing and the sea.

After returning the bike, I sat down to an elegant and decadent meal of fish at Pensionat Styrso  Skaret, that did not disappoint.

It emerged like a phantom — materializing out of the thick night, which hung over the island like an impenetrable fog. Suddenly, the darkness lit up like a storm, and the ferry was almost on top of the dock.

Raindrops stung my face as I raced out from under the awning, to the lowering gangplank, and back to the hotel.

My final night in the city, I wandered to the opera house, which is next to an impressive art musuem, and not far from the Liseburg Amusement Park.

If you go to Gothenburg, here are a few tips:

1. Normally, I wouldn’t say this; plan out your day ahead of time, and find a tour guide! Unlike other cities, where everything is clearly marked off, it’s easy to miss hidden gems. I would definitely recommend Jesper, he gives a great tour and is a really nice guy!

2. Don’t take a car, the roads through the city are a nightmare to navigate if you’re unfamiliar with the lay of the land — also, a lot of the roads are blocked off to cars, so it’s easy to get lost.

3. Make sure you take time to explore the city on your own, too. One of my favorite experiences was wandering the streets by myself the last night I was there — give yourself at least a day with nowhere to be, to soak it all in.

4. Go to the islands. They are breathtaking and worthwhile. From Central Station, take the 11 Tram to Stalthomen, where you catch the 281 Ferry going out to Vrango. There are quite a few islands, and I didn’t see all of them. The ferries run around the clock, so you’ll always be able to catch a ride home.

5. Bring your hiking shoes! I mentioned earlier that Gothenburg is the gateway to nature; well it is! There are quite a few trails nearby, especially on the islands; and the scenery is gorgeous — make sure you make room for hiking.

Or, you can look at the official website of Gothenburg (Goteborg):