Waiting on the quay for the ferry to Donso, we were mobbed by a group of 20 or so raucous schoolkids. Presumably, on a day trip to one of Gothenburg’s many surrounding islands, they proceeded to shove their way past the deckhand as he lowered the gangplank.

Following them on board, we sat down, grateful for the relative warmth as we watched the horizontal rain lash against the window. The slate grey sky and sea outside, punctuated by the ubiquitous jagged rocky outcrops, gave it the feel of a Scandi noir series.

Half an hour and a couple of stops later, though, we had reached our destination. Clearly, the only ones staying on the island tonight, we headed to our abode and former ice house — the Hotel Isbolaget — to drop our backpacks.

Unmanned out of season, we entered the door code we had been given and found our room. After a quick turnaround, we procured a couple of bikes and set off to explore the island.

The place was like a ghost town, with only the occasional souped-up golf cart passing us by. The reason for this preferred transport mode later became clear: the island is car-free, so it’s the next easiest form of getting around.

Welcome to island life in Gothenburg’s southern archipelago, a well-kept secret from lazy tourists who don’t bother to venture outside the city. They don’t know what they’re missing.

It’s the perfect destination for a short winter break, long after the 6,000-odd summer visitors have come and gone from its shores. With its raw nature and dramatic scenery, you could be on Scotland’s west coast, were it not for the distinctive traditional Scandinavian-style maroon and white clapboard houses that intersperse the islands.

After leaving the harbor, we took the bridge across to neighboring Styrso, which has a land mass of 1.58 square kilometers and been occupied since the Stone Age.

Picking up a winding trail through the nature reserve, we cycled through thick pine forests, passing by remote bays and inlets lined with sea-smoothed rocks, and the coastal communities of Bratten, Halsvik and Tangen.

It seemed life hadn’t changed a jot since the 1950s, the fishing vessels gently bobbing up and down on their moorings and lobster nets piled high on the quay.

As the light started to fade, we made our way back to the hotel, only to discover that the restaurant was shut. With no other immediate options, we headed over to the island’s only open shop for some bread and a tin of spam.

Washing down the evening’s delicacies with a couple of bottles of local beer, we tuned into some Swedish drama, the dimly lit harbor and storm brewing outside only adding to the tension.

As I drifted off, my mind raced with visions of Swedish gangsters fitting their victims with concrete boots and dropping them into the deep.

Relieved to discover that no one had been murdered when we woke up the next day, we went to pick up a pair of kayaks that we had hired from a man in the Swedish secret service. As the wind was up, we wheeled them down the street to a bay on the leeward side that we had been advised to use.

Kayaking on the Island

Sheltered from the wind and with the sun high in a clear blue sky, it was perfect conditions for a spot of kayaking.

Lazily meandering our way around the bay and its bridge and various jetties that extended from people’s back gardens into the sea, you couldn’t see or hear a soul, save for the occasional oystercatcher for company.

After returning our kayaks, we caught the next ferry to Vrango, the most southerly and remote of the three islands.

On our visit, just about everything was shut, from the ice cream parlor to the floating sauna: one can well imagine this place getting a bit lively in peak summer.

Climbing to the island’s highest point, we got a panoramic view of the archipelago. Perched on top of the huge rock was a solitary red hut, which had clearly withstood many a passing storm in its time and would endure many more.

Pitching up at a prime spot on a picnic table at the end of the quay, we tucked into the sandwiches we had made earlier at breakfast and a couple of cans. Looking out across the dark and foreboding Baltic Sea, you don’t come much closer to the elements than this, I thought to myself, as the gloomy mid-day drizzle set in.

Determined to find a spot to swim, we set off again on a loop of the island, taking in all manner of flora and fauna, from wild blueberries, fungi, and lichen to sandpipers, falcons, and even native black sheep. Just as we found the perfect little beach, the rain turned to a steady downpour.

Quickly abandoning the idea in favor of the hotel spa, we made a beeline for the ferry back to Saltholmen. Within an hour we were a world away, with our feet up and sipping cocktails in a swanky city hotel bar, reflecting on what had been an action-packed couple of days getting back to nature. 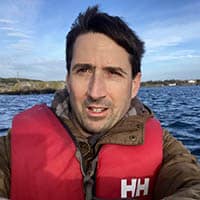