Why, Golden, Colorado, of Course!

Is there anything more fun than petting an excited, tail-wagging, whole-body-shaking and grinning Golden Retriever? How about 1,500 Golden Retrievers, all together in a small space for one doggone cute photo op?

That’s what has happened twice now in Golden, Colorado, and will be staged again for a third time on Feb. 4, 2023, when the historic little town hosts the third annual “Goldens in Golden.”

And Golden, Colorado, has done it now. Twice!

More than the Name?

Why Golden, Colorado? There’s really no reason connected to the dog breed, other than the coincidence of the name.  Golden’s PR pro Joy Meadows came up with the idea as a cute stunt for the town (Goldens in Golden?  Why not?).

But the idea was just as much a nice tribute to Joy’s aging Golden Retriever, “Waffle,” who loved roaming the trails in Golden and rubbing noses and smelling other dogs, especially other Goldens.

So armed with approval to close Golden’s main street for just one hour, a toy megaphone (that proved to be useless) and a small step ladder for a photographer, Joy put out some press releases and invited people to bring their Goldens to Golden for a historic photo under the iconic 1948 “Welcome to Golden” arch.

Gathering of the Golden Pack

The plan was to have everyone gather at the Golden Visitor Center parking lot, where there would be “pup cups” of whipped cream for the dogs to enjoy, and then there would be a short parade of dogs up Washington Ave. to the welcome arch for a photo. Joy says, “We really didn’t know if we’d have a couple of dozen dogs, or maybe a couple hundred.

We had Kong, a local manufacturer of fun dog toys, donate 100 bags and toys for the first few lucky arrivals, but we didn’t expect much more than that.”

Volunteers were placed on the bridge that crosses pretty Clear Creek in the center of the old Gold Rush town with the assignment of counting how many Golden Retrievers crossed.

Joy was clutching her step ladder and worthless megaphone, the appointed time came and the street was closed to traffic.  And then the canine chaos started.

Goldens Retrievers came from every direction. Goldens are the most popular breed of dog in America, and Colorado loves dogs.

Miles of Hiking Trails in Golden

And no place in Colorado loves dogs more than Golden, which has miles of hiking trails, dog bowls outside stores, dog-friendly outdoor beer gardens, and hotels like the Golden Hotel, that with notice will put out a “welcome sign” and a welcoming bowl of water and snacks in the lobby for any dog staying overnight.

Still, a couple of hundred dogs were the prediction, at best. Within an hour, more than 1,200 Golden Retrievers crossed the bridge over Clear Creek to the welcome sign, which, Joy and volunteers soon realized, could be accessed from all four directions. Goldens were coming from everywhere! The count from one direction was meaningless. Estimates of 1,500 dogs were conservative.

Since it was February, there were Goldens in jackets, Goldens in costumes, Goldens wearing hats, and tail-wagging Goldens in different shades from white to dark rust. There were dozens of family reunions. It was common to hear owners say to their dog (in dog speak, of course) “Oh look Max! There’s your sister!  Wait, OMG! There’s your mother!”

CBS Morning National News declared it the “Happiest day in America.”  It was impossible to tell who was happier, the dogs overjoyed by this many of their fellow relatives all together, or their owners, who were trying to hold every one on leashes while madly taking selfies and photos.

Princess Diana probably never had more photos taken of her in one hour than some of the Golden puppies.

Walking across a sea of Goldens wagging their tails was nearly impossible. As was getting orders with the happy and wiggling crowd.

Eventually, volunteers gathered the momentum of moving in one direction, Joy was able to shout and create an imaginary line across the street where the first ten rows or so were encouraged to sit, and with an order to “smile!” (unnecessary to Golden Retrievers who are always smiling), a photo was taken.

The gathering in 2020 and 2021 was postponed because of the pandemic, but the 2022 Goldens in Golden was equally amazing. By now the word was out. Counting dogs became impossible. News crews discovered people who had come from Canada and across the U.S. Never underestimate the love Golden owners have for Golden Retrievers. And the desire to see so many different dogs of the same breed altogether.

The third gathering on Feb. 4, 2023, promises to be just as much fun. Why February? Well, just as every dog has its day, so does everything else. International Golden Retriever Day is Friday, Feb. 3, so the parade was moved to Saturday, Feb. 4.

The Base of the Rockies

For those who think this a strange time for an outdoor event in Colorado, the truth is that Golden is located at the base of the Rocky Mountains, not in them, so February is an exceptionally dry month with average daily high temperatures of 45 degrees.

No thick-haired Golden Retriever has ever complained about the temperatures during Goldens in Golden Day.

The 2023 event will have much more dog toy giveaways, but Golden is still a small town and the event has not gone commercial. Dogs will still rule the day. 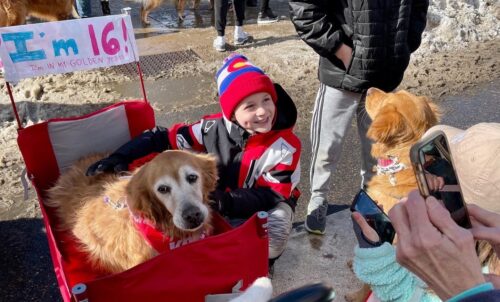 Sadly, Joy’s dog Waffle (who was the inspiration for the event) only made it to the first Goldens in Golden Day celebration. But Joy’s new spirited part-Golden pup Sadie will be there. And all dog breeds are welcome to participate and join in the parade.

Besides the Golden Retrievers, What Else Does Golden Offer?

Located just 12 miles from downtown Denver, the town was the first capital of the Colorado Territory and is today filled with wonderful old buildings and surrounded by mountain views.

A pretty river that tumbles down from the mountains, Clear Creek, flows through the middle of the town and is lined with paved trails that wind to the west for a couple of miles up into a scenic canyon, or east all the way to Denver and beyond.

Because Coors Brewery is located here, the city brews more beer than any other spot in the world, but there are also nine craft breweries with dog-friendly outdoor beer gardens as well as two dozen restaurants, most offering outdoor seating.

The famous scout and showman Buffalo Bill Cody is buried in a museum on top of Lookout Mountain overlooking Golden, and the town is home to the Colorado Railroad Museum with Colorado’s largest collection of narrow- and standard-gauge locomotives, steam train rides, indoor and outdoor model railroads and more.

For more information on all:  www.visitgolden.com

Rich Grant is a freelance travel writer in Denver, Colorado, and an active member of the SATW and NATJA. He is co-author with Irene Rawlings of “100 Things to Do in Denver Before You Die,” published by Reedy Press. Originally from New York, he was at Woodstock in 1969, before moving West as a ponytailed, pot-smoking hippie driving a VW bug.  Today he is pretty much the same, but driving an old Honda CRV.  Some of his early stories appear on his blog, RichGrandDenver.com.