Don’t rush to the mountains when your flight lands at Denver International Airport for your Colorado vacation. 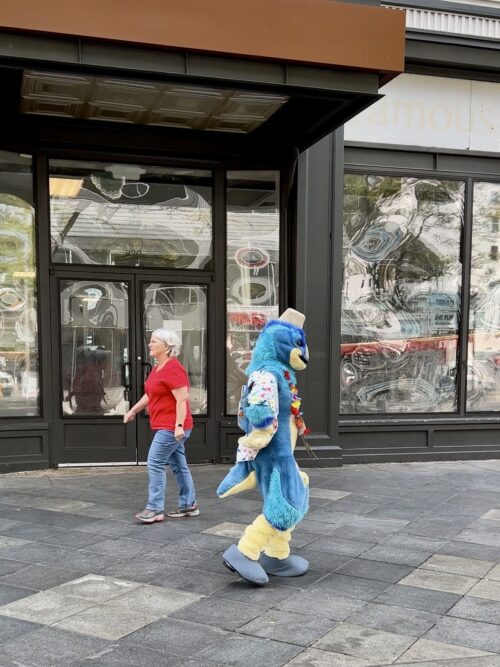 You will be missing out!

Denver International Airport is now connected to the iconic, historic Union Station. Take advantage of the quick and easy direct train departing every half hour, and spend a few days discovering the Historic LoDo  Neighborhood.

The trek by train is the easiest way to make the 20-plus mile trip into the City.

Once there, you don’t need a car; everything is reachable by foot or Uber. Denver is an outdoor city with a vibrant, walkable Downtown offering urban adventures for all ages.

I love all the architecture the City has preserved. It boasts one of the finest remaining collections of the late nineteenth and early twentieth-century commercial structures in the American West.

LoDo was once the center of Denver’s mining industry. Many of that era’s grand red brick structures have been transformed. High-spirited crowds throng the streets of LoDo whenever the Rockies play at Coors Field, so dining, drinking, and people-watching opportunities abound.

Denver’s downtown neighborhoods are some of the most diverse and exciting in the West. Like many large urban cities, Denver has a large homeless population, and the pandemic has exacerbated this problem. Tourists are advised to stay clear of areas where homeless people reside.

Most neighborhoods are safe, but when Downtown, don’t wander into less populated areas, especially at night, staying on the main streets and sidewalks. There is a significant police presence in the neighborhood, watching for locals’ and visitors’ safety.

A little bit of  LoDo History

In 1858 a small amount of gold was discovered at the confluence of the South Platte River and Cherry Creek. It would become the 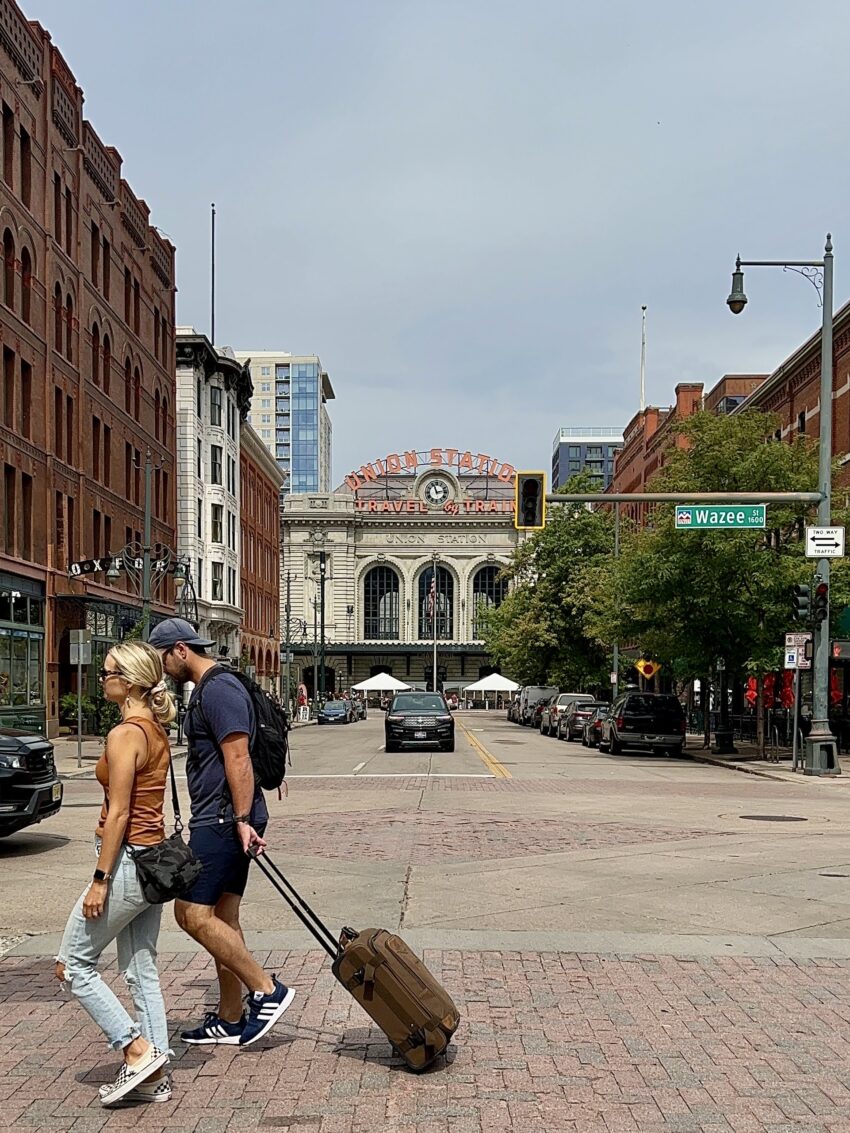 birthplace of Lower Downtown (LoDo). In the 1980s, LoDo was “a little sketchy” – many places had been boarded up. The remaining structures harbored an underground crowd of drifters, punk rockers, and late-nighters. Today, the bustling restaurant and brewpub district offers a wide array of unique shops, art galleries, and high-end lofts.

LoDo is in the heart of Denver. If you’re headed here for a week or a weekend, here are my favorite things to do and places to go. 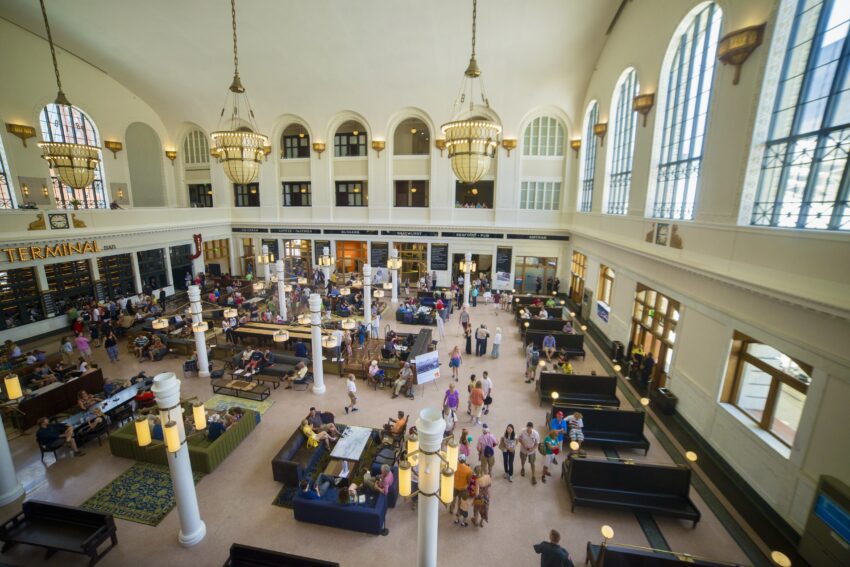 Union Station, the renovated 1914 Beaux-Arts train station, is often called Denver’s Living Room. Thanks to a wave of redevelopment, downtown Denver’s once-neglected Union Station is surrounded by action in a way it hasn’t experienced for more than half a century.

During the summer, Union Station hosts a variety of live entertainment, performances, and even a farmers’ market. Inside, find restaurants and shops, as well as the Terminal Bar, which always serves up fun, handcrafted cocktails.

My Stay at the Crawford Hotel

LoDo is an authentic downtown gathering place and the home of the Crawford Hotel. Perched above the iconic Great Hall, the 112-room boutique hotel creates a luxurious oasis within a storied landmark, captivating the magic of train travel and the Victorian era.

As you enter the bustling railway station, the Great Hall serves as the hotel’s lobby and main entrance, serving double duty as a waiting room for rail passengers. The historical details of the 65-foot ceilings, soaring windows, and stunning chandeliers are showstoppers.

I arrived before my room was ready, but I had so much fun exploring  Union Station that I didn’t even care. The hotel blends modern with historical and has an amazing art collection.

In addition to the Terminal Bar, look up, and you’ll find what the hotel calls its “best-kept secret” — the Cooper Lounge.

It’s a more intimate lounge overlooking all the hustle and bustle below.

Located in the former office space of the Old Union Station, my third-floor room overlooked the train tracks. I loved watching the people hustle to board the trains from the 16-foot windows imagining where everyone was traveling.

Once you’re fueled up, take in the City’s sights on foot. Places like Coors Field are mere blocks away. The hotel’s free Tesla will take you anywhere within a two-mile radius, or grab one of the hotel’s free e-bikes to explore other attractions.

Satisfy your sweet tooth at Milkbox Ice Creamery. Snooze is only open for breakfast and lunch; it is one of the most sought-after spots in town.

When  I discovered two restaurants are owned by James Beard Award winner and celebrated Denver chef Jennifer Jasinski, I had to learn (and taste) more. Jennifer is the executive chef and co-owner of four Denver restaurants, and two of the world-class dining options are here.

Stoic & Genuine is a modern take on seafood that blends classic dishes with an innovative twist, using ingredients that are flown in fresh daily.

Impeccably sourced oysters from both coasts, whole Maine lobsters by the pound, and a selection of fresh-from-the-water creations are the stars. Ultreija is a homage to Spain and Portugal’s shared plate pintxos and tapas.

I was transported to the Iberian Peninsula as I checked out the mouthwatering menu in a mural-lined, split-level space.

The 16th Street Mall is a pedestrian-friendly tree-lined promenade designed by famed architect I. M. Pei. It’s a perfect place to grab a bite in the outdoor cafes, do some shopping, or engage in serious people-watching at a LoDo bar. Clocktower Cabaret is a one-of-a-kind venue in the historic D&F Tower on the 16th Street Mall.

It’s a fun-albeit-racy post-dinner experience. While burlesque does involve female nudity, it is more of an art form that includes the occasional pastie. The mall is undergoing a renovation project as a key part of Downtown’s comeback and revitalization.

For shopping and quality dining, head over to the charming Larimer Square. An iconic and lively gathering place, the street is lined with historic Victorian-style buildings, the site of the original staked claim of “Denver City.”

Named for General William Larimer after gold was discovered nearby, it’s a  fun street to walk and pop into shops as you check out the terrific restaurants lining Larimer Street.

Don’t miss the Green Russell Speakeasy with handcrafted cocktails—a perfect place to unwind after a day in LoDo.

See a game at Coors Field

Tour the 76-acre home of the Rockies and cheer them on when you visit Coors Field! Don’t have a ticket for a seat in the stands?

Then join the locals at  The Rooftop Bar. The standing-room-only hotspot has a great view of the game and stunning panoramic views of Downtown Denver and the Front Range. The historic district Dairy Block is between Coors Field and Union Station and is now a vibrant micro-district. The Denver Milk Market is an all-local mix of take-away and dine-in restaurants and bars.

Rockmount Ranchwear flagship store is a historic landmark and a must-see stop in LoDo. One of the last remaining early businesses in the neighborhood, the building dates from 1909.

The late “Papa Jack “Weil famously invented the Western snap shirt in 1946, the same year he founded the store. He was well known for coining the phrase, “The West is not a place; it is a state of mind.”    The signature “Sawtooth” pocket and “Diamond” snap design is considered the longest continuously made shirt in the USA.

Third-generation owner Steve, shared stories of its long-running history. Rock stars and famous actors are their longtime customers, and the shirts have appeared in over 100 movies.

While we were chatting, musicians from Valencia, Spain, who were on a road trip to the US, had made their way to the store to buy shirts to wear during upcoming performances.

Denver is now considered one of the best beer cities in the United States, home to over 50 breweries. Wynkoop Brewing Company— Denver’s original brewpub, is often credited with helping revitalize LoDo.

I sat down for a beer with fellow GoNOMAD Travel Writer Rich Grant and he shared stories with me about his beloved City. The brewery is in an 1800s warehouse that was on was on Skid Row when it opened.

“I came in 1971 when Coors was the only beer you could buy in a 600-mile radius. LoDo had no ballpark, no streetlights, just deserted century-old brick buildings from its heyday.”

In 1988, John Hickenlooper and some partners rented an abandoned building and opened the first craft brewery in Colorado.

A Brewery Sensation in LoDo

It was a sensation, creating stouts, IPAs, cask-conditioned ales … styles of beer no one had ever tasted. LoDo was the epicenter of the early-era craft brewing efforts. Within a few years of the Wynkoop opening, Denver had what no other city had — five craft beer pubs, all within a short distance. 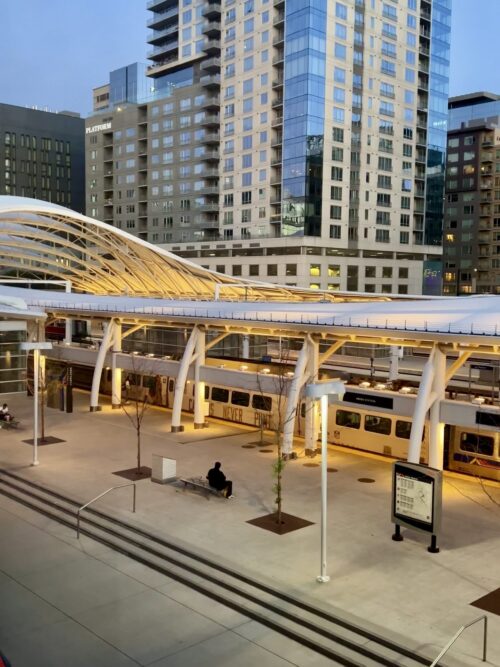 Ghost Stories at the Oxford

The elegant Oxford Hotel was opened in 1891, is listed on the National Register of Historic Places, and is one of Denver’s most luxurious landmarks.

The hotel is known for its haunted past, peppered with paranormal peculiarities. The Guests and staff share tales of a gory murder-suicide in room 320, where a young woman shot and killed her beau before turning the gun on herself.

Eternally a scorned lover, she continues to haunt single men who dare to stay in that room, with stories of sheets ripped from the bed and a man’s arms pinned by the ghost.   Born the day after the prohibition repeal in 1933,

The Cruise Room in the hotel is Denver’s longest-running bar and has remained open since its founding.

How to get around LoDo

Service continues through the day, with the last round trip starting at 1:19 am. Denver has an excellent bike share program with a pick-up/drop-off point near Union Station. Scooters are always available at the station if you want to zip around LoDo.

Visitors to the Denver area once only traveled straight to the mountains. Now urban explorers are pausing to check out the Mile High City’s unique neighborhoods, flourishing with appealing spots to shop, eat and relax.

On your next trip to Denver, Lodo is an excellent place for a home base. Take the train into the City and enjoy all that Denver offers.

The Author’s trip to Denver was sponsored by the tourism board, Visit Denver,  but the opinions are hers alone.
You Might Enjoy Reading These GoNOMAD Articles: