New Brunswick is a Nature-Lovers Paradise

New Brunswick is the most underrated Province in Canada.

“There was no rushing wall of water when the tide came in. The Sea’s return was calm and orderly; tongues of water crept across the beach, flooding the low places and rising until the vast expanse of mud and gravel flats was once again beneath the Sea. Then, as quietly as it came, it drained away.”  — Fundy Bay of the Giant Tides

Unsung and incredibly beautiful, New Brunswick is Canada’s best-kept secret. Seafood, outdoor activities, and whale watching take center stage here in New Brunswick, but the star of the show is the highest tides in the world.

The maritime province is well-known for its unspoiled beauty, untouched wilderness, and the famous Bay of Fundy coastline. Yet, it is far less visited than its neighbors, Quebec, Nova Scotia, and Prince Edward Island.

I recently enjoyed a weeklong road trip along New Brunswick’s spectacular  Bay of Fundy coastline, where I experienced the thrill of walking on the exposed sea floor, searching for fossils at Cape Enrage, and whale watching at Saint. Andrews by the Sea.

The region is home to the Fundy Isles Archipelago and the UNESCO-protected Fundy Biosphere. The Stonehammer UNESCO Global Geopark on the shores of the Bay of Fundy incorporates more than 60 significant geological and fossil locales.

My husband and I flew into Moncton, where we were met by our host, Neil Hodge of Destination New Brunswick. He regaled us with the rich history of New Brunswick and showed us the unique beauty of the Bay of Fundy.

Hitting the road the next morning at the crack of dawn to catch the tides at their lowest point,

I couldn’t wait for our walk on the sea floor at Hopewell Rocks. But first, a quick stop at Tim Hortons for a cup of joe and a donut; that is what Canadians do.

Neil is a lifelong resident and passionate advocate for New Brunswick; he proudly shared what sets New Brunswick apart. 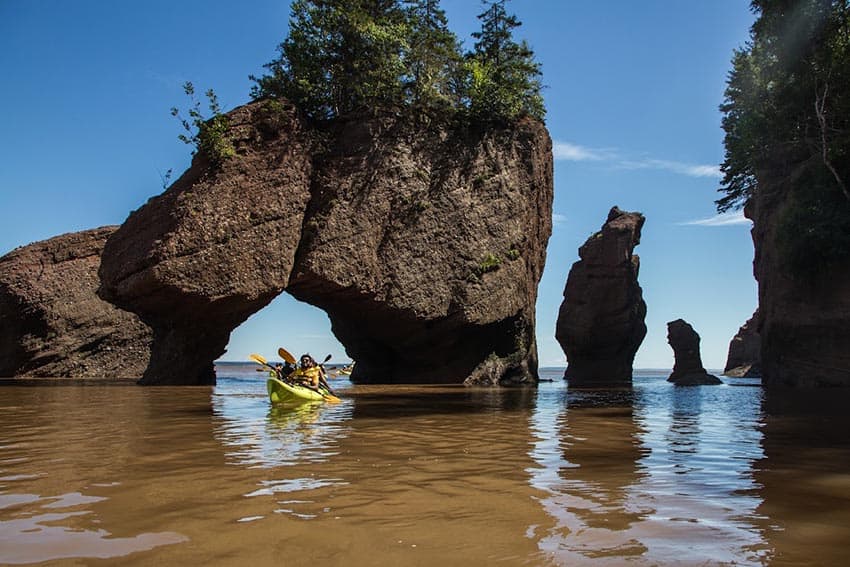 Our province is 85% forested, and we have 3400 miles of coastline. The tides change twice a day between high and low, rising more than 40 feet in parts of the Bay. This phenomenon has shaped the unique landscape of the coastline and the entire region.”

To put it in perspective, Neil shared the analogy that “the amount of water that comes into the Bay of Fundy for one tide change is enough to fill the Grand Canyon twice, or it’s equal to all the freshwater rivers in the world combined.”

Located on the southeast coast between Moncton and Fundy National Park, Hopewell Rocks is one of the most iconic destinations in New Brunswick.

Open from 9 am to 8 pm during summer, the entrance pass is valid for 2 consecutive days, so you can catch both high and low tide. Check out the helpful Interpretive Center for its video presentations and interactive displays.

Be sure to check out the tide schedule before your visit. The ocean floor is accessible for about 5 hours; pets on a leash are welcome in the park.

We made our way to the platform and metal staircase leading down the ocean floor. Visitors can descend the 99 stairs and, after exploring, boast bragging rights after climbing the 101 stairs back up to the top.

No worries if you are not a fan of stairs; there are two other access points to the ocean floor.

Magical was the only word I could think of as I gazed over the Bay of Fundy.

Setting foot on the ocean floor, I was awestruck by the beauty of the rock formations. My enthusiasm for discovery kept taking me around each bend, wondering at the fascinating landscape nature had created.

The water was as smooth as glass, with a calming light-filled background of blue hues—the horizon melding into the Sea.

The over 23-standing sea stacks peppered along the shoreline are nicknamed “flowerpot” rocks, as the trees that grow at the top of the brown stacks resemble plants in a clay pot.

Over thousands of years, erosion has carved unique rock formations, the soft conglomerate cliffs sculpted by tide and ice into caves, arches, and urn-shaped stacks. At high tide, they become islands.

We had to hurry along a bit to get to the beach’s end before turning back because of the rising tide; the lapping water was silently creeping up the shore. Tide patrol minders stretched along the sea floor’s length, ensuring that all the stragglers were ushered out in time.

Has anyone been trapped? The answer is—yes. The park has constructed an escape tower to climb up to flee the rising tide; you’ll have to wait many hours until the tide recedes again.

One of the most popular activities at Hopewell is kayaking. When the tide changed a few hours later, we went on a guided sea kayaking excursion with Baymount Outdoor Adventures.

We paddled over the very beach we had just walked on that morning, around the otherworldly sea stacks and under rock arches. The ocean floor transformed in a way I wouldn’t have thought possible, adding an eye-opening perspective to the visit.

Fundy National Park is an outdoor adventurer’s paradise. Over 75 miles of walking and hiking trails will bring you through mountains, valleys, forests, and past waterfalls. It is located on the Bay of Fundy near the town of Alma and is part of the UNESCO Fundy Biosphere Reserve.

This 80 square miles park on the upper Bay has a dramatic coastline, spectacular tides, and a fog-moistened coastal forest of spruce and fir. Steep cliffs alternate with hidden caves, waterfalls, and vast tidal flats.

Dickson Falls Trail is perfect for families with many vantage points of the beautiful waterfall.

The mile loop trail takes about 30 minutes to complete and has a beautiful view of the Bay of Fundy.

I loved the red-painted wooden  Point Wolfe Covered Bridge spanning the Point Wolfe River, a picturesque symbol of the past.

Alma is a Great Lobster Stop

One of my favorite stops on the road trip was the fishing village of Alma. This is a quaint and charming little town with one main street.

The Harbor goes completely dry at low tide, with the lobster boats sitting on the ocean floor.

The fishermen only have a three-hour window to come and go from the Harbor.

Located at the Fundy National Park entrance, it has cute shops, pubs, cafés, and ice cream stands where you can stroll on the wharf or walk on the ocean floor at low tide.

New Brunswick has a long fishing tradition, so seafood is a staple here. We had the best-steamed lobster at Alma Lobster Shop—third-generation fisherman and family-owned.

Our hand-picked lobsters were swimming in the Sea just that morning.

The Fundy Trail Parkway is a slow coastal drive. There are more than 20 scenic lookouts where you can park the car, get out and enjoy breathtaking views of the Bay of Fundy and its long, rugged, rocky coastline.

The Parkway allows people to enjoy nature and features five beaches, four waterfalls, hiking trails, and many picnic areas. Walton Glen Gorge dubbed the “Grand Canyon of New Brunswick,” is a stunning stop on the Parkway.

It’s easily accessible along a half-mile gravel path to an observation platform overlooking the spectacular Gorge.

Before the Fundy Trail Parkway was completed, it would have taken an eight-hour round-trip challenging hike to see the Gorge.

With the sweeping views of the dramatic coastline, I had many “honey-stop-the-car” moments.

Cape Enrage is a Natural Treasure

The historic Cape Enrage lighthouse overlooks Chignecto Bay like a cliff-top fortress. Here since 1838, it is still operational. Cape Enrage gets its name because the bay-funneled winds often strike the Cape full force. It’s the graveyard of many a ship.

The rock formation that comprises the Cape could be characterized as one “really big fossil.”

The individual fossils at Cape Enrage are contained in successive beds of sedimentary rock laid down approximately 320 million years ago.

Rocks with fossil impressions were everywhere on the beach… don’t take them with you when you leave.

St. Martins is the Gateway to the Fundy Trail

St. Martins is a charming little fishing village with twin covered bridges that span a tidal river and towering sea-carved cliffs that are etched by time. The sea caves, beach, and tidal Harbor are the main attractions.

The caves almost disappear at high tide, but you can explore the massive caves when the water goes out. Sea Kayaking at high tide while checking out the sea caves and the Fundy Trail coastline are favorites.

Historic seaport Saint. John is the only city on the Bay of Fundy and the oldest city in Canada. The Saint John River flows more than 400 miles from its headwaters in Maine to the Bay of Fundy. One of only two Reversing Falls in the world, they are a tidal phenomenon.

At its mouth, the river surges over a shallow ledge and through a rocky gorge into the Bay. Twice daily, the Sea rises and spills back through the Gorge, up over the ledge, and overpowers the river reversing the flow.

Seeing the river coursing one way and smashing against the tide is fantastic.

Six species of whales have converged in the Bay of Fundy for millennia in their search for the rich feeding grounds necessary to maintain their enormous bulk.

We donned our storm gear and walked the long pier to board the boat for a whale-watching tour with Island Quest Marine.

Once we hit open water, it didn’t take long before we spied the giant but graceful mammals of the Sea. At the entrance to Passamaquoddy Bay, the picturesque  Head Harbor Lighthouse had everyone on the top deck with cameras ready.

It was built in 1829 on a small, rocky islet off the northern tip of Campobello Island.

This Bay of Fundy road trip often had me stopping take in one stunning sight after another. The islands, shores, and waters of Fundy offer a rare commodity…nature—unspoiled and unhurried.

The best way to experience it is to leave the major highways and venture down side roads to seaside villages, pocket beaches, coastal paths, and craggy headlands. New Brunswick is  “Canada’s Best Kept Secret”—an underrated escape to nature.