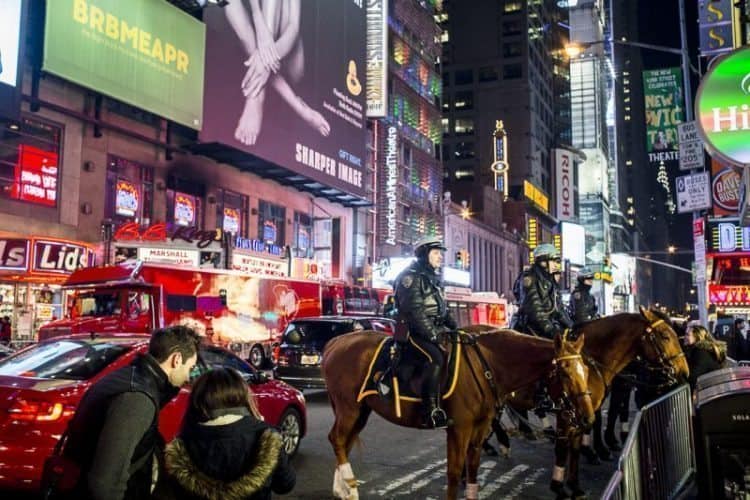 Airbnb, however,  suggests a different way to solve this solution. Airbnb is a company that travelers to use rent out a place to stay in a house or apartment as an alternative to hotel lodging. These accommodations are the homes of others, known as “hosts,” who rent out the space for profit. It benefits all parties involved, it’s a (relatively) cheap option with a very homey atmosphere.

Previous law in NYC deemed it illegal to rent out entire apartments for less than 30 days, in an attempt to stop short-term rentals from taking apartment units off the market for full-time residents.

Financially, landlords would benefit from having short-term rentals more than having a full-time resident, so this would create a lack of housing for residents and drive up the price of housing.

While the law makes these short-term rentals illegal, New Yorkers have ignored the law and continued to rent out their apartments for short periods of time.

“New York is taking a bold step that will hopefully set a standard for the rest of the country and other countries in the world that are struggling with the impact of Airbnb on affordable housing,” said Assembly Woman Linda B Rosenthal, a Democrat who sponsored the bill.

The rules, passed by the state legislature make it illegal for residents of “Class A” multiple dwellings in New York City—buildings designed for three or more families—to advertise their full home for rent for less than 30 days.

This affects apartment units and does not affect a shared space or room. The fines for breaking the law are costly: violators will be fined $1,000 for the first offense, $5,000 for the second, and $7,500 for the third.

“Airbnb thought they could come into New York, break our laws, and bully our leaders like Governor Cuomo and legislators, who have stood up to protect the affordable housing supply for millions of New Yorkers,” Peter Ward, president of the powerful New York Hotel Trades Council.

The company filed a suit in Federal District Court in the Southern District of New York, quickly after the October passage of the law, arguing that this new legislation would violate the company’s constitutional rights to free speech and due process. The lawsuit was filed against the State Attorney General Eric T. Schneiderman, Mayor Bill de Blasio, and the City of New York.   Airbnb settled the suit in 2020 and now provides information to the city about who is renting Airbnbs and where.

Not all listings will be divulged. Exceptions include private or shared rooms that can fit no more than two guests; spaces that are infrequently rented; and listings by certain hospitality establishments such as bed-and-breakfasts or hostels, which will need to apply to the city to qualify.

Due process means the principle that an individual’s life, liberty, or property cannot be taken away without proper legal procedures and safeguards.

The due process clause appears in both of Fifth and Fourteenth Amendment in the US Constitution, such as the right to a speedy and public trial, by an impartial jury. The due process clause’s jurisdiction has been argued for and against throughout the history of the Supreme Court (and lower circuit courts).

The company also argues that Airbnb’s protection afforded under the Communications Decency Act (CDA) is being violated. In this landmark case involving the CDA, the Supreme Court found it to be unconstitutional, finding that federal law says websites cannot be held accountable for content published by their users.

The law, “would impose significant immediate burdens and irreparable harm on Airbnb,” says the company. “In order to be assured of avoiding liability, including potential criminal prosecution, Airbnb would be required to screen and review every listing a host seeks to publish.”

Airbnb, in an attempt at proposing an alternative to the legislation, has offered to crack down on people who rent out multiple homes and would create a registry of hosts. Creating a registry would aid state officials in identifying hosts violating housing regulations and it would ban hosts after they have violated local housing regulations three times.

Josh Meltzer, Airbnb’s head of public policy for New York, said in an emailed statement: “We will continue to fight for a smart policy solution that works for the people, not the powerful.”

There are some critiques about Airbnb’s proposals: “[It’s] nothing than the same failed P.R. Airbnb has tried in every city that seeks to strengthen to stem the tide of their exacerbation of the affordable housing crisis,” said Neal Kwatra, the chief of strategy for Share Better. Share Better is a coalition of elected officials, housing activists, community groups, and unions aligned against Airbnb.

Kwatra stated that Airbnb’s response, “It’s a tacit acknowledgment of what we’ve been saying all along — that Airbnb is dominated by commercial with multiple listings who are stealing our supply of affordable housing.”

“In spite of Airbnb’s misleading statements to the contrary, those who want to legally use sites like Airbnb—for example by renting out a spare room while they remain in residence—are still free to do so, as they have always been,” said Linda Rosenthal, the assembly member who sponsored the bill.

“Those who are breaking our laws and disrupting their neighbors and communities will now face stiffer penalties.”

This is not the first place Airbnb has faced issues with local housing regulations. In San Francisco, the company’s hometown, Airbnb sued the city for its incurred fines against hosts who have failed to comply with regulations.

Other places have been Los Angeles, where the city council is considering making it legal for under 30-day rentals, but it would require Airbnb to hand over significant amounts of data. In Miami, there is a city-crack down on short-term rentals. Airbnb, after incurring $1.6 million in fines over a period of five months, spent close to $1 million on a TV ad campaign in this Florida city.