Times New Roman: A Modern Life in the Eternal City 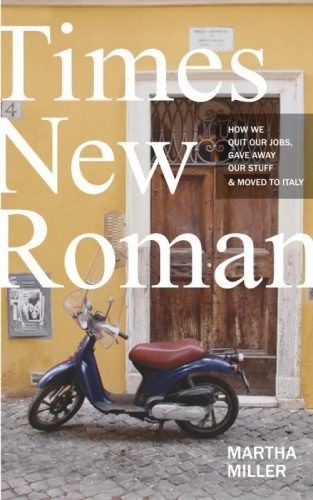 How an American Couple Made their Roman Dream Come True

Times New Roman: How We Quit Our Jobs, Gave Away Our Stuff & Moved to Italy

is a true account of lifelong dreams to live abroad, experience another culture, complete an education and alter two career paths.

When Martha first met John she overheard him musing about quitting his job and living in a box on a beach in Mexico. She was immediately skeptical, but secretly intrigued. Fast forward two years and they are enjoying their honeymoon in Mexico.

Before marrying, they had discussed the “box on the beach” idea endlessly. The “box” was upgraded to a more stable dwelling and European countries were included in their pool of choices.

They had enough money saved to bum around for a while, but then what? John was 42 and Martha was 37, too old to throw caution to the wi

nd, too young to retire.

Martha wanted to live somewhere and not feel like a tourist in city after city. She wanted to know her neighbors and understand what their lives were like. They needed a plan that would allow them to experience another culture, but also prepare them for future earnings.

In Times New Roman, you will learn what that plan entailed, how they decided where to go and how they funded it themselves. Using their experiences as a backdrop, Times New Roman focuses on modern life in the Eternal City.

By adapting their lifestyle, they learned how to live, eat, shop, cook and dress as the Romans do. And either through osmosis or out of necessity, they picked up some Italian behaviors they never expected.

Spaghetti can be eaten most successfully if you inhale it like a vacuum cleaner.

John’s taking a nap, I’m flipping through O, The Oprah Magazine, an artifact of my American lifestyle, and I am only now realizing how wonderfully peaceful it is here.

Not in a no-noise, silent way, but peaceful in that the sounds drifting through our apartment windows are gentle and soothing.

Rather than distracting me from reading, the sound of scuffling on a patio, plates clinking in a nearby kitchen, the rev of a motorcycle from the vicolo and muffled voices from an open window let me know that we are not alone. We’re a part of this charming neighborhood.

John’s awake now and we’re hungry, perhaps because we’ve caught a whiff of the biscotti one of our neighbors is baking. It’s only 5:00 p.m., much too early for true Romans to dine, but I decide to make dinner anyway.

Starting with the salad, I rummage through the solitary drawer in the kitchen. The only implement to slice the tomatoes is a thin, red-handled knife. The blade is dull, and it makes a bigger mess than necessary.

The plastic cutting board is warped, creating a shallow bowl in the middle. This is fortunate actually because the juice running out of the fruit has somewhere to pool instead of dripping onto the floor.

There is no counter space so I balance the board on the oven’s burners and manage to hack the tomatoes into pieces.

Pulling open a broiler from under the stove, I quickly scrub it clean and prepare the salmon. We’ll broil the fillets, but first we’ve got to figure out how this gas oven works.

The oven’s red knob has no words or numbers encircling it to give us a hint as to temperature. John turns the knob back and forth a few times, but it doesn’t seem to accomplish anything. Pulling the oven door wide open, John bends down on one knee and puts his head in the oven to take a better look.

Coming back out, he says he’s located the pilot light and grabs the large box of wooden matches left by a previous tenant on the pantry shelf. John turns the oven on again and shuts the door. We wait a few seconds to let the gas build up, then bending his six-foot frame over the tiny opened door John strikes the match. KABOOM!

I scream as a hot blast of air shoots out of the oven singeing John’s eyebrows. It also produces a rumble so loud and forceful I’m sure all the neighbors around us have heard and will come running to make sure we’re okay. No one comes. If the neighbors are home and have heard the roar and my screams, they aren’t too concerned.

Rather, this probably happens each semester as a new student or visiting professor takes this apartment and has to learn the ropes. I imagine the neighbors chuckling and saying to each other, “I guess the americani figured it out,” and then going on with whatever they were doing.

The salmon is ready for broiling. I rarely cooked fish in Houston due to nearly year-round air conditioning and lack of ventilation. With windows sealed shut, the fishy smell would linger for days, mercilessly reminding me of a meal long past. Here, we can throw the windows wide open and delight in the cross breeze circulating in our appartamento on the fourth floor.

In our haste during this morning’s grocery shopping, we neglected to pick up a bottle of wine, but a little liquor store on Via della Scala one street over has caught my eye. Leaving John in charge of cooking the salmon, I dash down the stairs, out the front door and up and around the end of our vicolo to the wine shop.

Teetering on the paved cobbles sits a small bistro table and two chairs at the entrance to the wine shop. A short, gray-haired woman I’ve already seen here a day or two ago is sitting in the same chair, talking with a man with gray whiskers in the chair opposite.

It seems obvious she is the wife or mother of the shopkeeper, but I don’t know why I am so sure of this. She seems completely comfortable, as if she were sitting in her own home.

Inside the small, well-stocked store, hundreds of bottles are on display in dusty, slanted racks and stacked cardboard boxes. A man is pouring wine at another tiny round table inside the store. It appears he is hosting an informal wine tasting. Two men are breathing in the aroma, their Roman noses unpretentiously dipped in the glasses.

They take a sip, and, I suppose from the flow of conversation that follows, offer their opinions. I wander up and down the two aisles becoming more confused about the right wine to choose when a man from behind the counter greets me, “Buona sera, signora.” My heart melts a little.

He responds, “Certo,” or “Certainly,” and joins me in the aisle. He immediately plucks two bottles from the dusty racks and holds them out for my inspection. I randomly choose one that costs about six dollars.

He puts the bottle in a brown paper sack and thanks me. I’m hesitant about leaving the shop; I’d like to hang out here a while longer but my stomach is growling. Besides, I know I’ll come back soon and maybe next time the man pouring wine will offer me a taste, too.

It’s now about 6:00 p.m. and the streets are getting more populated as people take their passeggiata – an afternoon stroll through the piazzas.

Almost every person I pass on my way home is eating gelato. How do they stay so slim and why are they eating ice cream right before dinner? But then I remember Italian custom is to dine closer to 9:00 or 10:00 p.m.

I walk back up Via della Scala, around the end of the street and hike back up the three flights of stairs. I surmise it is not a problem for Italians to keep weight off with all the walking they do.

I hope it won’t be a problem for us either. John and I sold our vehicles in Houston and have no plans of buying one here. John is an avid cyclist and amateur racer and is naturally thin, but I will plump up quickly if I don’t keep moving.

Back in the kitchen, despite a dangerous start, John has done an excellent job cooking the salmon, drizzling fresh lemon juice over the fillets as a finishing touch. They are just the right shade of pink and the fork test shows them to be flaky but not over cooked. A simple salad of arugula, or rocket, as it is known here, the mangled tomatoes and enormous olives stuffed with almonds are tossed in a blue plastic bowl.

Along with the wine, we drink tap water with no ice. The freezer doesn’t have an ice maker or ice trays. On previous visits, I’d noticed Italian restaurants do not put ice in water. We make this minor adjustment painlessly.

The layout of this apartment is undeniably strange with the bedroom sandwiched between the living room and the kitchen. There are no chairs and no room to sit down to eat in the kitchen, so we carry dinner plates, beverages and silverware from the kitchen through the boudoir to the table in the living room. Awkward? For sure, but not fatal.We are far more concerned about looking gauche to our neighbors across the courtyard.

While we love the view and the ability to observe our Italian neighbors going about their day, it isn’t without a catch. Not only can we see them, but they also can see us and we are accustomed to eating dinner early, around 6:30 or 7:00 p.m.

We are so hungry, we sheepishly pull in the shutters, blocking their view of us, as we sit down and devour our first home-cooked meal well before the sun has set.

After we clear the table and wash the dishes by hand, it is too quiet with no television or stereo as background noise. We take a walk in search of dessert and find a bakery open on San Francesco a Ripa. John  has been a fan of Nutella for years and it is a popular Italian- made product.

Standa sells liter-sized jars stacked on an end cap that seem more like promotional props than actual grocery items. Warm pastries with this chocolate hazelnut spread make a perfect after- dinner treat. We buy a couple of them and, still standing in the shop, savor all their gooey goodness.

With sticky hands, we return home. Before even approaching the door to our building we catch a whiff of the unmistakable aroma of garlic and onions sautéing. Clinking pots and lively voices get more distinct as we climb the stairs, passing the apartment where a neighbor is preparing dinner.

I wonder what delectable feast is being served tonight. Perhaps sausage with mushrooms. Or if that is too heavy for a warm night, a simple tomato sauce with fresh basil served over homemade ravioli and topped with shaved parmigiano. I like the idea of eating dinner late like this. I vow to make this adjustment and live like our fellow Romans even if it means having to eat more gelato.

Buy the book: Times New Roman: How We Quit Our Jobs, Gave Away Our Stuff & Moved to Italy