Going Local: Introduction by the Author 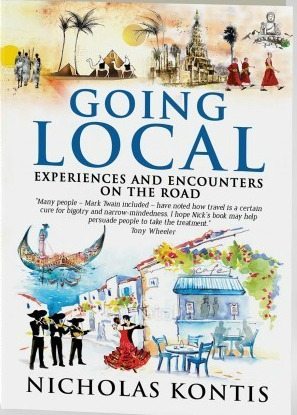 If a picture is worth 1,000 words, what is an experience worth? Like the long-lasting memories that come from them, the experiences of any voyage are what make travel unique and priceless.

Travel opens us up to so much of our world, connecting us with people, culture, and nature.

Some of my fondest childhood memories are of the summer vacations I spent in Greece. At a young age, I learned how to live with locals, experiencing them through familiarity, and learning to travel into the great outdoors.

I did not grow up rich, but I was taught to appreciate the fact that I was able to travel, as well as to respect nature and people.

I slept on couches, ate home-cooked meals with relatives or even individuals who were complete strangers to me. I thumbed rides to the beach, took road trips with cousins, and sought out new hangouts. I learned that where my parents went, I was meant to tag along. Which meant always meeting new local people.

A Shift in Travel Values

Over the past few years, there has been a shift in travel values. Now, more than ever, travelers have greater options to blend in with local society. Through apps, web sites, and travel affiliation groups, travelers are seeking out original experiences that will allow them to become immersed in the culture by living as the local inhabitants do.

Traveling to a new destination is exhilarating, but staying with someone who knows the landscape (physical and cultural) opens many more doors.

Taking the road less traveled, living off the beaten path, visiting more than just the typical tourist sites of your new turf should be everyone’s goal on any trip.

We should all make an effort to “go local,” learning about the culture of our new destination from the people who actually live in the region and to be chameleon-like as we blend into our new surroundings. Nowadays, modern-day explorers seek exclusive encounters and unique and authentic experiences.

Experiential travel, immersion travel, and peer-to-peer travel are the new buzz words heard throughout the travel industry. But is this style of travel really new? It’s as old as civilization itself. Ever since the poster child of the “going local” movement, Airbnb, allowed guests to bunk in one’s abode, a new genre of travel was put on the map and travelers took notice.

Today, there are apps and web sites revolved around staying with residents, sharing a meal prepared by a home chef, hitching a ride, and being guided by the experts who best know the lay of the land: local inhabitants.

As P2P (peer to peer) travel continues to lay its mark on traditional touring, visitors may choose from a wide variety of places to rest. Accommodations can vary from the aforementioned stay in a home or apartment, on a sofa or in a spare room, to more exotic locales such as lighthouses, universities, wineries, monasteries, boats, treehouses, or above an English pub. One might live with indigenous people, sleep in a castle, a converted airplane, or even on a small island.

Food now plays a predominant role in choosing one’s destination. Fifteen years ago, few travelers might have called themselves self-proclaimed “foodies.” The cuisine of a nation is now a fundamental reason at the forefront of most journeys. Globetrotters seek a greater understanding of their new digs through cooking classes, visits to food markets, and comingling with locals through the meal sharing revolution.

A rewarding way to see the world is by volunteering—traveling the world while helping others. You can work in a village in Africa, teach English in Myanmar, grow organic food in Guatemala, pick tea leaves in Sri Lanka, help to build houses in a Peruvian village, build schools in Bangladesh, or take a marine conservation holiday in Thailand.

Whether you’re helping people or assisting with the environment or the protection of animals, nothing beats volunteering.

Wanderers must also be responsible travelers by protecting ecosystems and becoming environmentally and culturally responsible. Tour operators are crafting programs and individual trips to tread lightly, leaving a positive footprint on the places where they guide people.

Go “Local” and you’re sure to return home with a better understanding of the world, and with greater tolerance and knowledge that can only be learned from interaction while merging into local society.

“The world is a book and those who do not travel read only one page.” – St. Augustine

Nicholas Kontis was born on one of the most breathtaking islands in the world, Santorini, Greece, and brought up in America’s culture capital of San Francisco. At a very young age, he developed a passion for travel, going back and forth between San Francisco and Athens, Greece during summer vacation.

By 12, he had learned the meaning of travel immersion by staying in various relatives’ homes, sleeping on couches, and learning to bake bread.

At age 19, Nick did his first Europe stomp, renting a car with two friends in Nice, France, and later participating in the annual “Running of the Bulls” in Pamplona, Spain, during the San Fermin Festival, where he came out unscathed. It would be an exploring trip around the world at age 24 that would end up being a life-changing experience. Subsequent to traveling by car, train, plane, bike, boat and hitchhiking all through the globe, even saving a baby in Bangladesh.

It was this trip of a lifetime that drove Nick to a long-lasting affection for travel as well as to a career in the travel industry. After returning to his native San Francisco with no job in sight, Nick proceeded to start the first successful travel agency in the United States specializing in discounts around the world airfares.

Nick has been featured as a guest speaker on both radio and television. He has been mentioned by Lonely Planet’s Tony Wheeler as an airfare master, and often alluded to as the “father of around the world airfares.”

Arthur Frommer once said, “If Jules Verne were alive today he would use Nick Kontis to go around the world in 80 days.” He is also a guest writer for USA Today and Huntington Post Travel, as well as numerous other travel publications. Maybe the greatest point of distinction for Nick is that numerous fellow travel writers and specialists in the field have referred to him as the inspiration for their decision to embark on careers in the industry.

Buy this book on Amazon:

Going Local: Experiences and Encounters on the Road