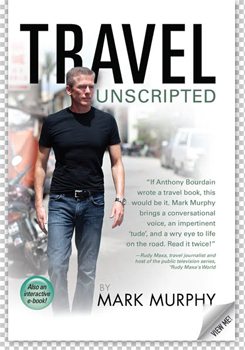 Running through the streets of Santorini you see the true character of author Mark Murphy. A collection of stories from his trips as a travel correspondent, Travel Unscripted shows you the back roads and places off the map while telling an entertaining story of his misfortunes or fun finds.

Santorini is a picturesque Greek island and a destination for many cruise ships. With towering cliffs and winding roads leading up to the main town at the tip of the island, simply getting to the place your going is an adventure while getting back was an experience for writer Murphy.

A champ in the travel industry, Murphy has hiked, sailed, climbed, and rafted in more than 50 countries. An entrepreneur for the site TravelTribe.com he gives readers his first-hand accounts of the world in an exciting new way.

Any trip to Greece has to include its renowned and rugged islands. One of the most spectacular of these is Santorini, and old volcanic caldera set in the Aegean Sea, about 200 kilometers (120 miles) southeast of the Greek mainland. This little piece of paradise in known for its incredible views, ancient history, and maze of whitewashed houses connected like a big jigsaw puzzle.

Most people visit Santorini the way we did, via a cruise that spends up to a day anchored in the small harbor between the uninhabited volcanic islet of Nea Kameni and the village of Fira.

Tenders from the anchored ships then transport visitors back and forth to the dock at the base of the cliff that soars 400 meters (more than 1,300 feet) straight up to Fira. Tourists can climb on the path that winds its way up, ride donkeys on that same path or jump on the high-speed cable car.

We took the cable car, at least on the way up. Our trip down was a bit more interesting and time-consuming, but not by choice. It seems that the good folks in these parts have a propriety view of their donkey paths, especially after night has fallen.

In Fira, It’s impressive how the whitewashed houses interconnect with one another. One person’s roof is another’s terrace in this most unusual and unique destination. We decided to explore this maze just beyond the shopping area packed with vendors and storefronts offering local merchandise and crafts.

We wandered down paths that twisted and turned, not sure where one house began and the other ended. It was fascinating indeed.

We ultimately found ourselves at a small restaurant and bar that made a great location to watch the sunset over Nea Kameni. We set up our cameras, shot our wrap, and then let the camera run to capture the setting sun. We would then use that footage to show a time-lapse version of the sunset to close out this particular segment.

We had some time on our hands until the sun disappeared, so we did what most people would do. Order a drink! The view was amazing. From this perch on high, we were able to gaze far to sea, with unobstructed views of the sun setting in the distance. You could say “It doesn’t get much better than this,” and you’d be right in regard to the scenery.

The only problem for me was that, despite being in this incredibly romantic setting, I was not with my wife, but with Nick, my multimedia producer. To make matters even worse, he barely said a word while we were partaking on our intimate little cocktail hour together.

I tried to temper my regret of not being with a lovely female by quickly sucking down three mojitos. No Talk Nick matched me swig for swig, even though neither of us is particularly known for our ability to handle alcohol. And maybe that’s why we were so nonchalant about the time passing as the evening’s deadline approached for getting back down the hill to the tender that would take us back to the cruise ship.

Finally, after the sun’s golden orb deliciously melted into the ocean, we finished the last of our drinks, packed up the equipment and made our way back toward the cable car.

The last tender to the cruise ship was leaving at 8:00 p.m., and it was now 7:30, so we strolled comfortably into the main area of town carrying both our equipment and a nice buzz. We had anticipated a wait of ten minutes or so and then a couple of minutes straight down the side of the cliff, leaving us plenty of time to spare.

The fog of alcohol was quickly replaced when we saw an extensive line leading to the cable car. Oh crap, I thought, there’s no way we can get on a cable car in enough time to make it down to the tender by 8:00 p.m. It would be the last run of the evening, so if we missed it we’d be sleeping in Santorini and figuring out how to catch up to the ship the next day.

This wasn’t anything I was interested in contemplating. I turned to an official-looking person wearing a uniform who happened to work for one of the cruise lines that were in port that day. I asked her how long it would take to walk don the cliff to the dock because the cable car was out of the question. “Thirty minutes,” she replied.

I looked at my watch and it was already passed 7:35. Panic started to set in. “Let’s go!” I barked to Nick as we turned left and hightailed it for the trail. Lights from the restaurants and businesses illuminated the path running down the first few twists, but all too soon they were replaced with much darker stretches as we made our way further and further down from town.

As the path got darker we noticed something else: dark mounds that made walking treacherous. These weren’t boulders or rocks that had rolled down, but donkey dung that had been dropped by those most industrious workers that had spent the daylight hours bringing tourists up and down the path. It seemed that every other step put you at risk of stepping in the dung, so we were on high alert.

As we made our way down the hill, a whole group of other people and their beasts of burden were heading up. The guys who handled the donkeys were done for the day and some of them were making their final trek to the top before calling it a night.

Donkey or No Donkey

They weren’t doing anything for us, but that didn’t stop each of them from demanding payment. I guess they felt that they owned this path. Donkey or no donkey, everyone had to pay, kind of like the New Jersey Turnpike.

Bullshit! I’ve spent too many years living in New York to have some donkey jockey shake me down. I’m going to pay you so I can walk down the path, and maybe even step in a landmine on the way? Not going to happen, my friends, not going to happen, I thought.

We rounded bend after bend, besieged by the never-ending demands for “payment.” With one hand on a donkey lead and the other extended out in front of me, it was clear the shakedown was in full swing. As I struggled to maintain my balance and avoid the droppings, I made my view about this known in a rather vociferous manner.

I’m not sure they would have agreed if they understood what I was saying.
“Sure, no problem. Let me give you my ATM card,” or “Do you take Visa?” were just some of the responses they got from me while Nick cringed. I’m not shy about voicing my opinion and laughing about it at the same time.

I know the donkey dudes didn’t think it was funny as I blew right past them, but I was actually cracking myself up as I came up with more and more things to share along the way. Poor Nick thought we might end up as donkey food… or worse. As strangers walking down a very dark path in a foreign country, perhaps we’d never be found or even identified!

Maybe these rough looking characters would simply knock us off, then unceremoniously cart our remains away on the swaying rumps of donkeys before happily feeding us to the Aegean fish while they smoked, swilled grassi and laughed about out foolishness!

My running dialog stopped as the last of the donkey handlers passed by, and I knew that time was running out. I had to really kick it into gear to make it to the bottom and the tender that would take us to the ship.

With its engines running and its crew scanning for any last remaining passengers, namely us, we knew we had a fighting chance.