Tearing Up the Silk Road

From China to Istanbul, through Central Asia, Iran and the Caucasus

Tearing up the Silk Road is an irreverent travelogue that details a journey along the ancient trade routes from China to Istanbul, through Central Asia, Iran, and the Caucasus.

As Tom Coote struggles through the often arbitrary borders and bureaucracies of China, Kazakhstan, Uzbekistan, Turkmenistan, Iran, Armenia, Georgia, and Turkey, it becomes increasingly apparent that the next generations to rise to power will see themselves in a very different light to their predecessors.

In an increasingly interconnected world, archaic conceptions of race, ethnicity, and nationalism will come to be seen as increasingly irrelevant. Instead, new forms of identity are emerging, founded more upon shared cultural preferences and aspirations, than on the remnants of tribal allegiance.

While rushing through from East to West, Tom Coote meets, befriends, and argues with an epic range of characters: from soldiers and monks to pilgrims, travelers, and modern-day silk road traders. All are striving for something more and most dream of being somewhere else.

By bus, train, and battered car – through deserts, open plains, and mountain ranges – we find ourselves again and again at the front line of a desperate war for ‘hearts and minds.’ Through rapidly expanding megacities, to ancient ruins, and far more recently created wastelands, it is the West that is winning the souls while the East grows ever stronger.

The real ‘clash of civilizations, however, seems set to be not between the East and the West, but between the few who have so much, and the masses now uniting to demand so much more. 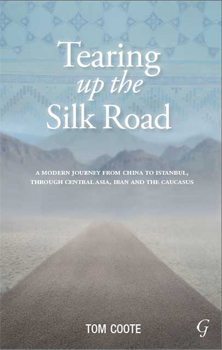 As we clattered through the Kyzylkum desert in the battered shared taxi, the driver reached across and offered me some

pills. When I asked him what they were, he shrugged. Sometimes the drivers would take nicotine pills rather than smoking, but chewing tobacco had already been passed around. When it was time to spit out the dregs, they would push open their doors and gob out huge streams of brown spittle into the passing desert.

If the timing were wrong and the wind in the wrong direction, then the back seat passengers would be splattered with the chewed-out remains. I was wary of accepting an unknown quantity of what I assumed to be amphetamines. The Uzbek guys on the back seat laughed at my hesitation and reached forward to grab a handful.

On the drive from Bukhara to Khiva, through Uzbekistan’s Kyzlkum desert, we had already been pulled over by the militsia several times. After checking our documents and a brief exchange with the driver, we would be on our way. This time was different. As a foreigner, I had expected to be the one who was subjected to the third degree from the armed police, but they didn’t even ask me see my passport. They asked me where I was from but just to pass the time.

As we dragged ourselves out of the sweltering taxi, the relief at escaping the cramped metal box soon evaporated with direct exposure to the brutal midday sun. We shuffled around in the desolation and waited. More militsia emerged to needle the passengers and poke around the car. They grew bored and wandered off. We waited some more.

The driver returned to the taxi with yet another armed interrogator and they drove off into the desert. Nobody asked what was going on. When the taxi returned and parked further up on the other side of the road, we all hauled up our bags again and trudged over. The tatty old taxi had straddled a previously unseen inspection pit from where the search began in earnest. Once the contents of the car had been emptied – including the padding and covers of the seat – they used whatever they could find to take it apart.

Our driver lowered himself into the pit and joined in. As screws and bolts and other bits of metal were hastily removed, they were left abandoned in the roadside dust. I thought about jumping

down and joining in – at least the car above would provide some protection from the unforgiving sun – but instead sank into the same infectious lethargy that had consumed my fellow passengers.

After far too long a transit van pulled up next to the inspection pit. I had assumed that they would be more militsia but they just looked like normal Uzbek guys in jeans and t-shirts.

They stood for a while, observing the deconstruction, before also jumping into the pit and collaborating in the carnage. I asked another of the passengers what they were looking for – I think he understood but just shrugged.

We crouched around our dismantled ride and passed around the remains of our warm drinking water. Eventually, the militsia – and anybody else who had joined in – lost interest, and wandered away, leaving us to try and put it all back together again as best as we could. As we were about to leave, I noticed that some of the nuts and bolts from below had been left behind.

I passed them over to the taxi driver who stared at them for a few seconds before shrugging and throwing them onto the floor of the passenger seat. It didn’t seem to matter. We headed back to the wilderness. 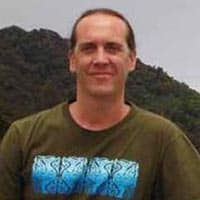 Tom Coote’s first book Tearing up the Silk Road was published worldwide by Garnet Publishing in August 2012. Since then, he has completed another full-length travel book called Voodoo, Slave’s and White Man’s Graves: West Africa and the End of Days. He has traveled independently in well over a hundred countries.