We found a place we could go while almost the entire country is locked down and suffering quarantine blues.

Our trip to three New York State hotels, all part of the Harbor Hotels chain, worked out very nicely.

Nobody was afraid, no one went maskless in the wrong place, the staff at each hotel was helpful, friendly and made our stay enjoyable–and we were never afraid!

We took an Empire State Road trip, beginning with the longest car ride of the trip, 7.5 hours, from GoNOMAD’s headquarters in South Deerfield MA to Chautauqua Lake in Celeron, NY.

Welcome to Our Hotel

Here, we met the masked-up staff, who were all friendly as they helped us check-in, but they weren’t bringing our bags to our room.  General Manager Henry Sirois even came out to greet us, which is always classy.  He gave us a luggage cart and after that, we were on our own.

Our third-floor water view room has a topnotch view of the lake and a balcony where we would enjoy morning coffee each day.  We learned during this trip in the pandemic era that hotel room cleaning is no longer really a thing anymore.

We could get fresh towels, but during our stays in all three hotels, no one cleaned our room, nor took any trash. It’s now up to the guests to leave the trash, or request towels and other things they need.

The hotel’s policy is stated on a handout we got, it clarifies that if a guest is staying multiple nights, on the third night they would come to clean the room and change the sheets.

Like so many of the properties in David Hart’s family-run hotel empire, this hotel is located right on the water. The Finger Lakes are a wonderful part of New York state, each extending for dozens of miles from north to south. Chautauqua is about 75 miles south of Buffalo

These are not the highest end of the price spectrum, but not a cheap Motel 6 either.  The weekend rate at the property was $641 for two nights.

Early Close, even on Weekends

When we arrived on July 9, the restaurant had been open for six weeks.  One of the results of the COVID was that the hours were cut, they close at 9 pm even on weekends.  The kitchen stops serving at 8:30 pm, be forewarned.

The outdoor deck that surrounds the circular structure (which was once an amusement park’s Ferris Wheel), is quite pleasant, and having to cut it short at 9 pm is a shame.

The meals we enjoyed at the hotel’s Lakehouse Tap and Grill were all on the spacious and shaded patio, which was exactly what we were hoping for.

We would find out later that each of these hotels offers basically the same menu for all locations during this time.  This is something that is being reviewed by management and may change over time. But for us, it meant that over six nights, we’d get to know every single item intimately since we would enjoy them more than once!

There are many interesting and one-of-a-kind attractions in this part of New York State. We ventured out into the small village of Panama NY, where the Panama Rocks Scenic Park offers a truly remarkable one-mile hike.

It’s a twisty, down, and around hike through giant natural rock formations with crevices, overpasses, and tunnels through rocks. website

Another great hike in this region is the Long Point State Park on Route 43 in Bemus Point, about 20 minutes from the Chautauqua Harbor Hotel, on the other side of the 27-mile-long Chautauqua Lake.

We were looking for a place to eat lunch and walked into the small Panama Diner.  A perfect choice–not so much.  When we saw both the cook and another patron not wearing masks, we decided not to have lunch there. Sorry not sorry, these days, it’s not really a discussion, as the pandemic rages all over the U.S.

Did you know that I Love Lucy has a connection here in western New York?  Indeed, the most famous person to ever come out of the sad city of Jamestown is Lucille Ball, and the city celebrates her with a Lucy and Desi Museum, right next door to a replica of the original Desilu Studios.

The other very much worth visiting attraction in Jamestown is the National Comedy Center, which was built in 2018 and paid for by hundreds of comedians, TV stars, and the state.

The center has been a big boost to both the Harbor Hotel chain and the city, and they market the comedy center with visits to the Lucy and Desi Museum. We spent more than two hours inside the center on a steamy July morning, and it was a treat from beginning to end.

The visit begins with a short multiple-choice survey on the kinds of comedy that makes each visitor laugh the most. Then with this programmed wristlet, you can tailor the stand-up and other comedy to hear what you think is the funniest.

It doesn’t always work, but it’s a neat way to enjoy the many aspects of humor–from the daily newspaper comics to comedy movies, stand-up, and television.

The town of Watkins Glen is famous for its auto racing track, and the town is claimed to be where the sport of American road racing was revived after WWII, in 1948.

For many decades the auto racers used local roads and streets just like in Monte Carlo, but after a series of accidents, the big four-mile track was built for the races instead.

But besides the racing track, the actual Watkins Glen is a spectacular state park and a hike like no other. You traverse a long bridge and then you wind your way around a series of waterfalls that are absolutely amazing!

The Watkins Glen Harbor Hotel is nearly identical to the other two properties, a wide expanse of rooms overlooking another scenic lake, but this hotel has no outdoor pool. Still, we had fun swimming and meeting some of the other guests in their indoor pool.

This hotel offered us a lesson in navigating the post-COVID environment.  We had a banquet scheduled that brought all of the journalists together in an indoor events hall.

When we entered the room, there were three tables with eight seats at each. A typical arrangement found at any wedding or business meeting. But no, this wasn’t going to work for COVID times, and many of the writers pushed back.

No problem.  The hotel staff rolled out two additional tables, allowing us to sit four to a table, and we were all a little more comfortable.  Adjustments made, no harm no foul!

Watkins Glen offers many fun tourist attractions, many of which were still open during our visit.  Wineries are famous here, with more than 70 wineries up and down the coasts of Seneca Lake.

Thirty of these formed the Seneca Lake Wine Trail, which along with the beer trail of the same name, offer up handcrafted ales and wines made right here.

Not only wine but spirits are a part of the mix here. Finger Lakes Distilling opened in 2009, and there are also many hard cider producers, joining the trend that’s using up apples and delighting visitors.

The last stop on our Empire State Road Trip was north, about three hours drive, from Watkins Glen to Clayton New York. This drive takes you past the vast agricultural areas that dot this large sparsely populated part of the big state, past silos and farmstands, through tiny towns and cornfields.

Clayton is the smallest of the towns we’d visit, and it’s located on the mighty St. Lawrence Seaway, so you get a view of passing ships, a parade of classic old wooden boats, and the various jet skis, motorboats and sailing vessels who constantly pass by.

One thing that’s funny–the hotel here is nearly identical to the sister property in Watkins Glen. So you walk down the same hallways, see the same carpet, and know exactly how to get to the indoor pool and the gym, it’s identical!

The attractions here all revolve around the water, and one of the places we enjoyed visiting was the Antique Boat Museum.  It’s a sprawling set of buildings, with docks that house their collection of 300 antique boats and outboard motors.

A Spin in a Runabout

The best part of the museum is taking a spin on the grand Miss Thousand Islands III, a 2005 Hacker-Craft with a rear seat and a giant car motor.

We toured the lake on a sparkling morning feeling the breeze and seeing the many houses built on just a spec of land, and the boathouse of the magnificent Boldt’s Castle.

The story of George Boldt has been told a thousand times in the Thousand Islands–he built a gigantic castle for his wife, and then she died before she ever got to live there.

Boldt was a famous wealthy New York City hotelier who ran the ornate Waldorf-Astoria Hotel but loved to come up to these islands by train in the summer. He collected many boats, including his 110-foot houseboat which is docked at the Antique Boat Museum.

A Safe Place to Stay

Thousand Islands Harbor Hotel, like their sister properties, has a conscientious staff and management and they made our visit feel safe while allowing us to enjoy the beauty of this part of northern New York.  If you’re sick of being cooped up during the pandemic, we can wholeheartedly say that an Empire Road Trip will cure what ails you. Not COVID, just that boredom!

This trip was sponsored by Harbor Hotels but the opinions are the author’s own. 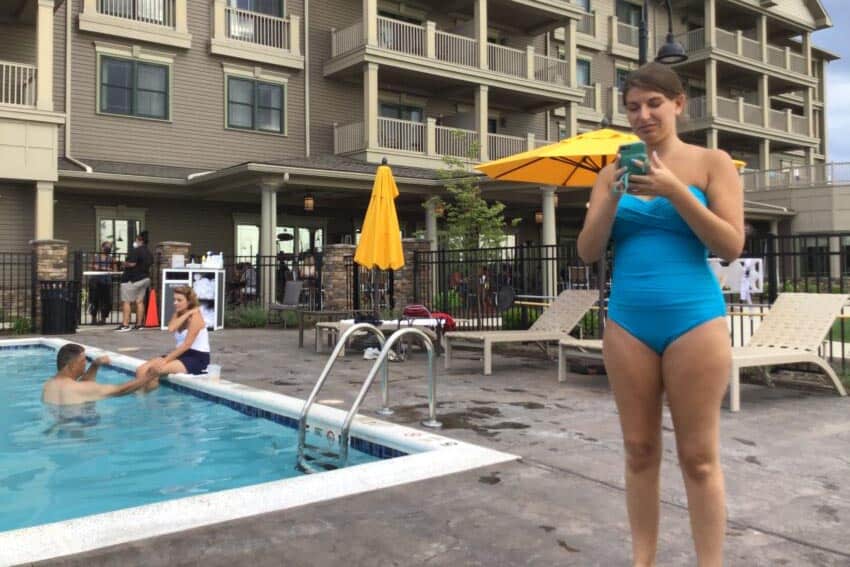 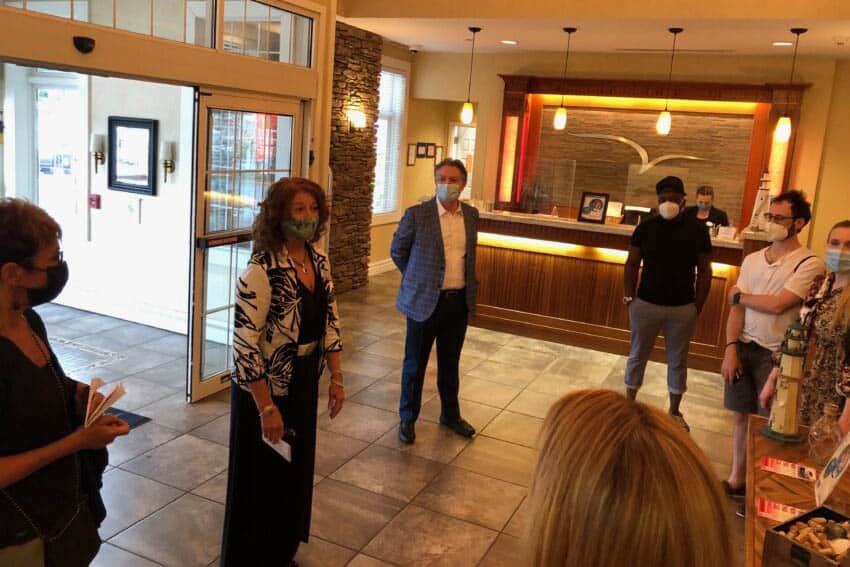 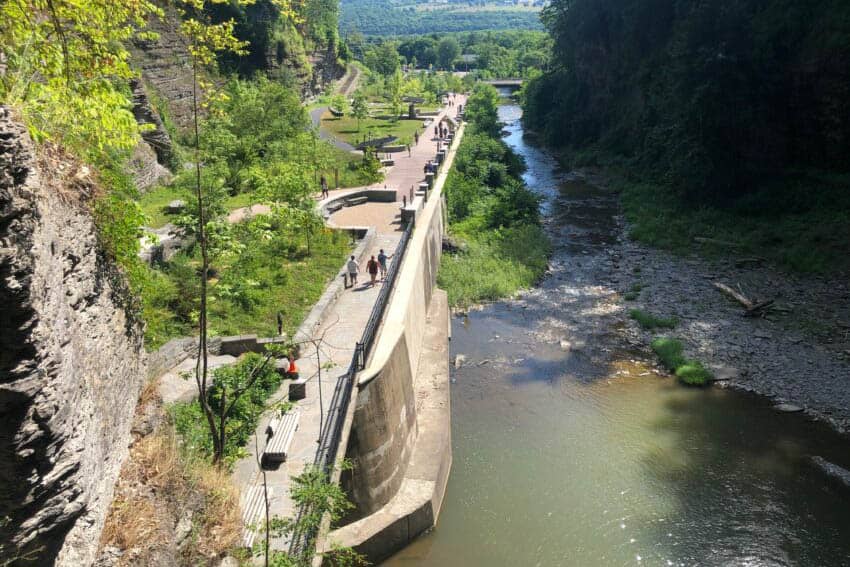 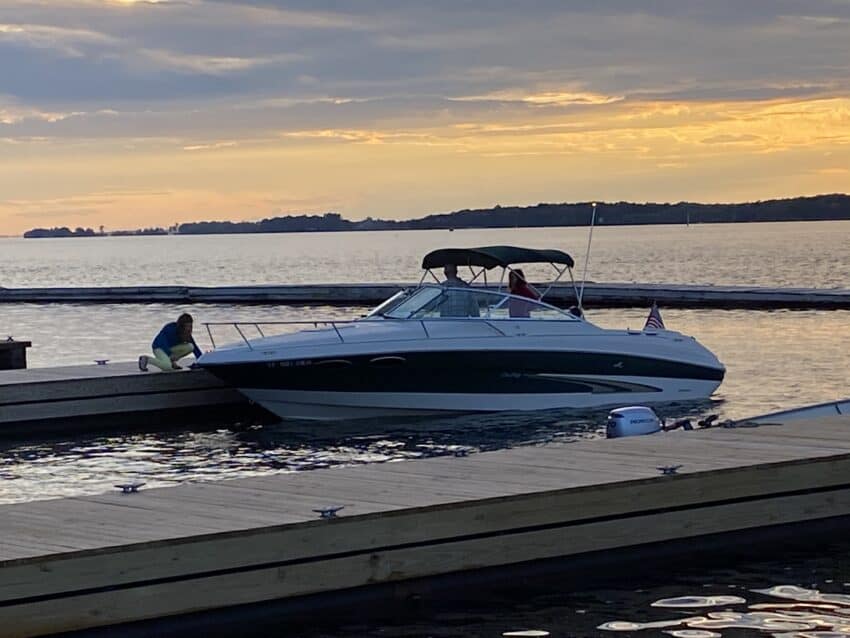 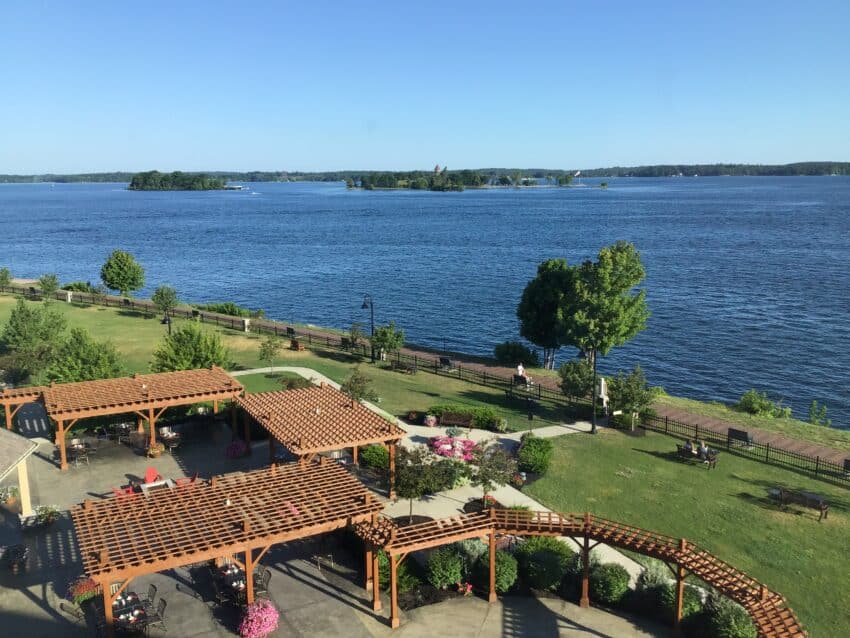 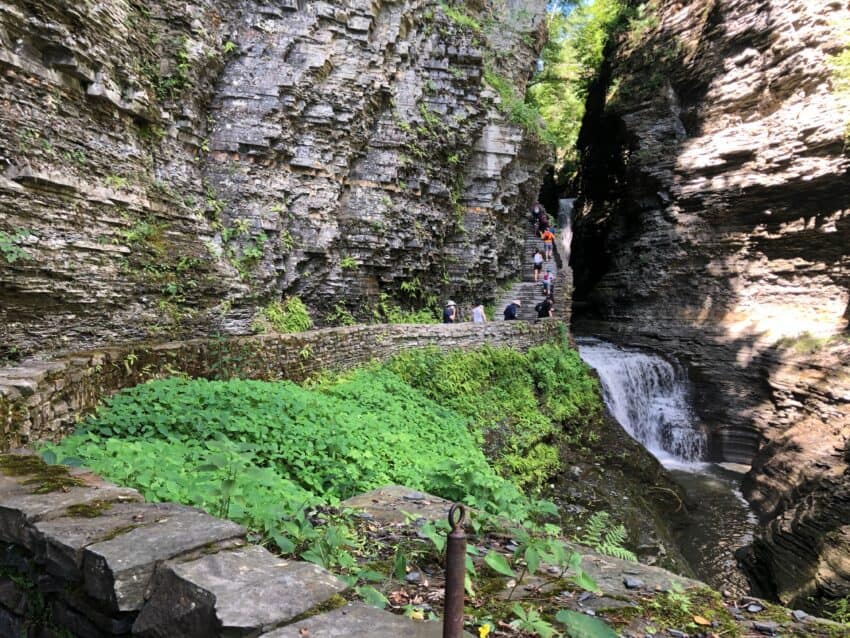 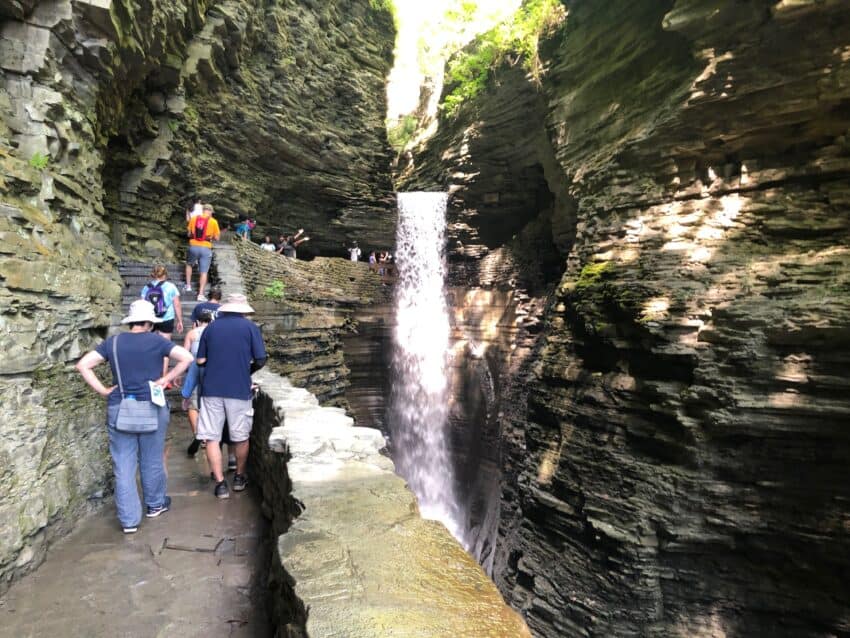 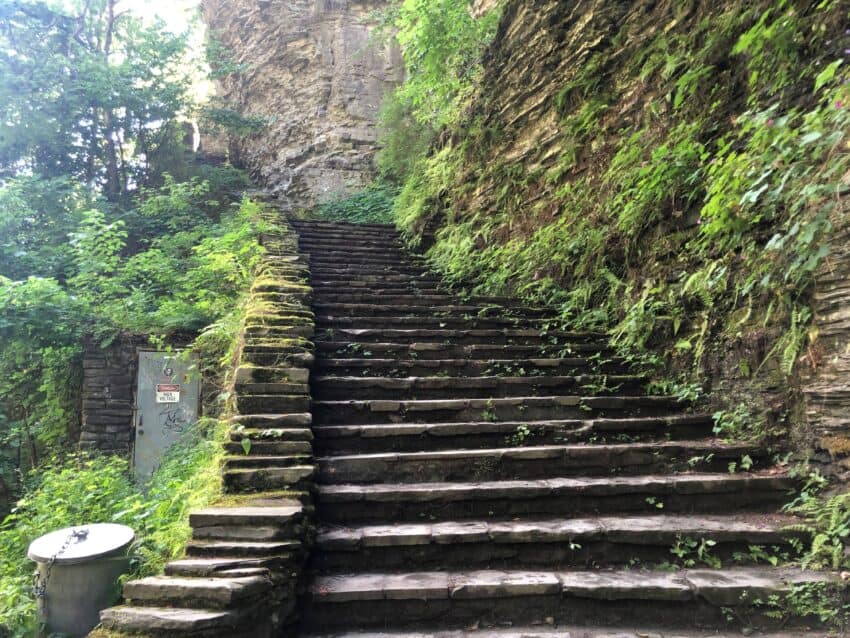 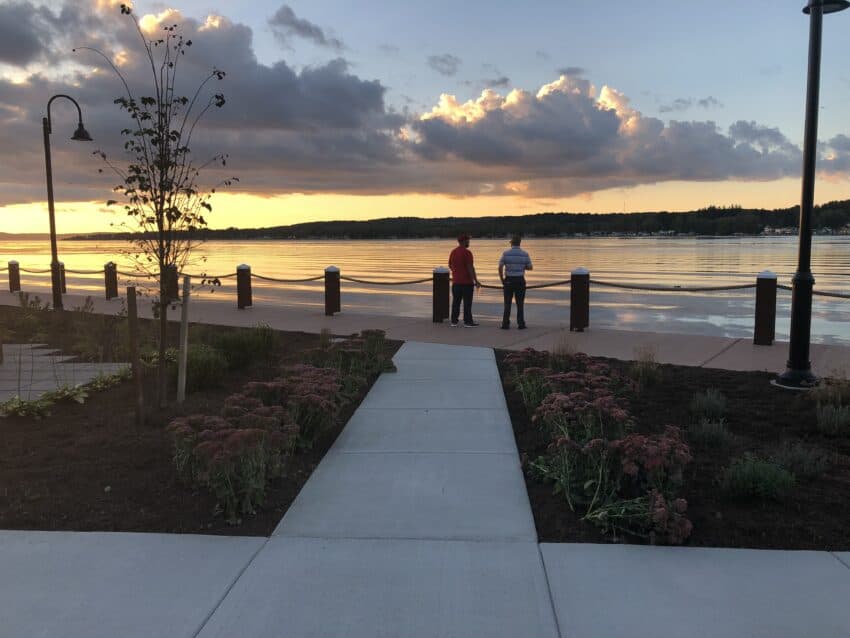 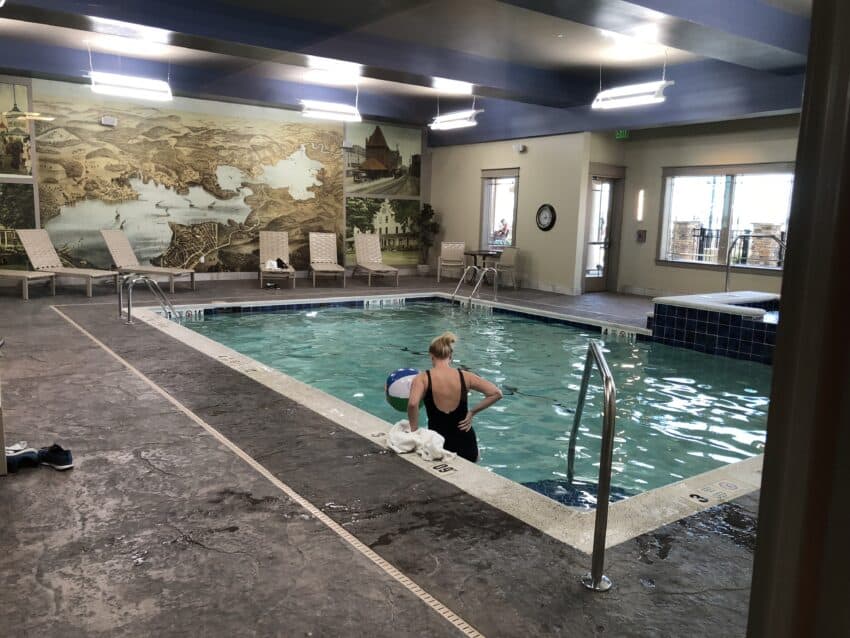 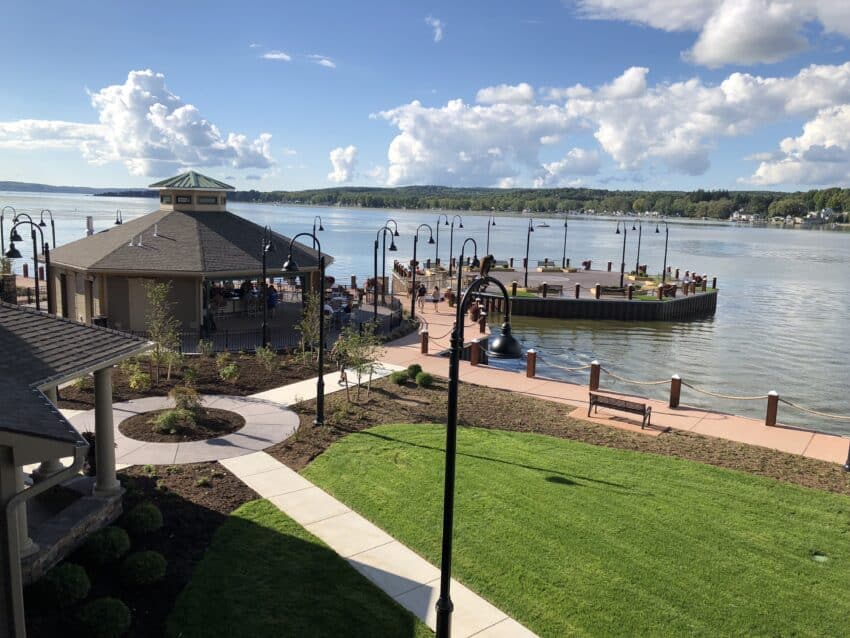 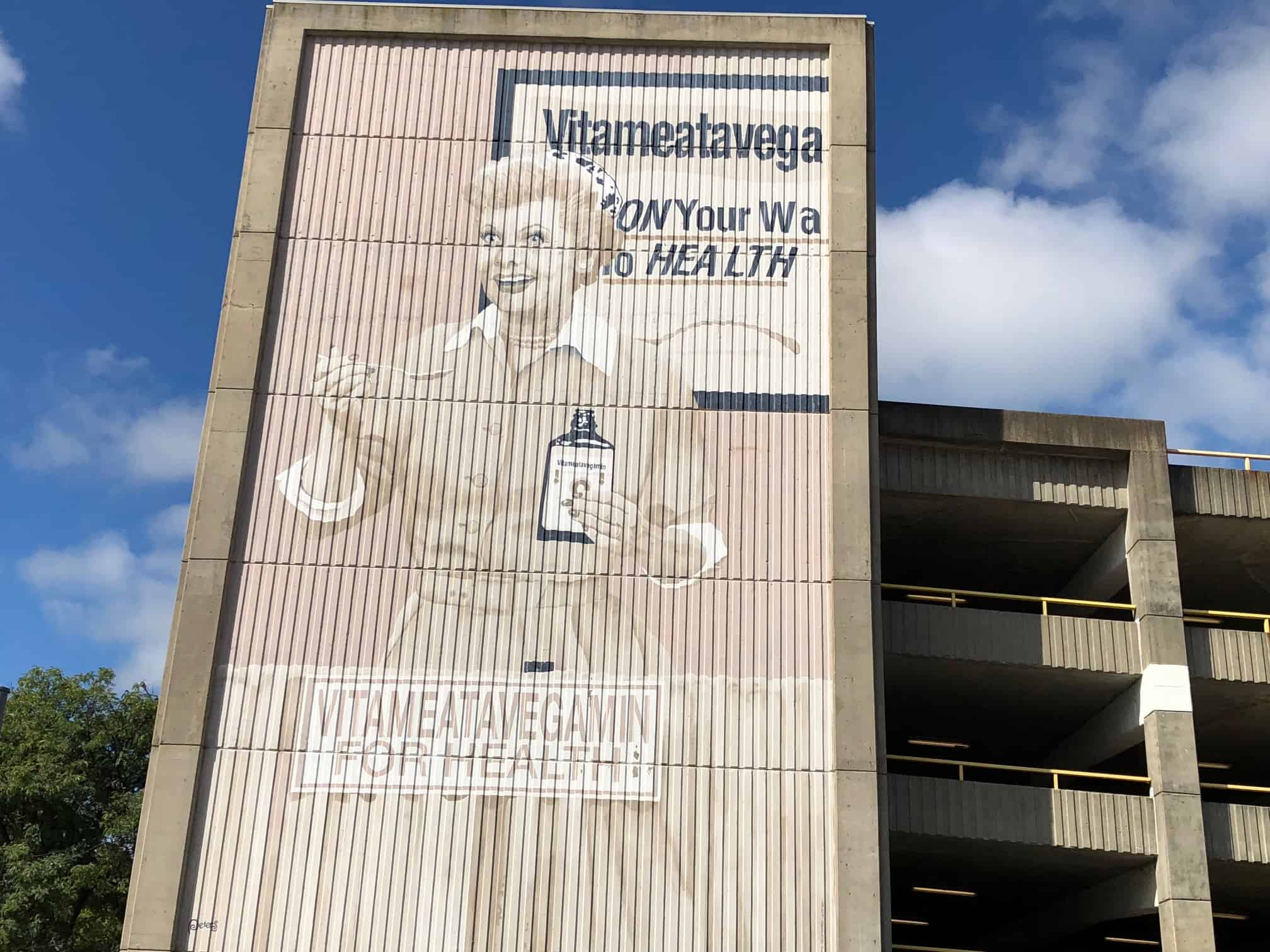 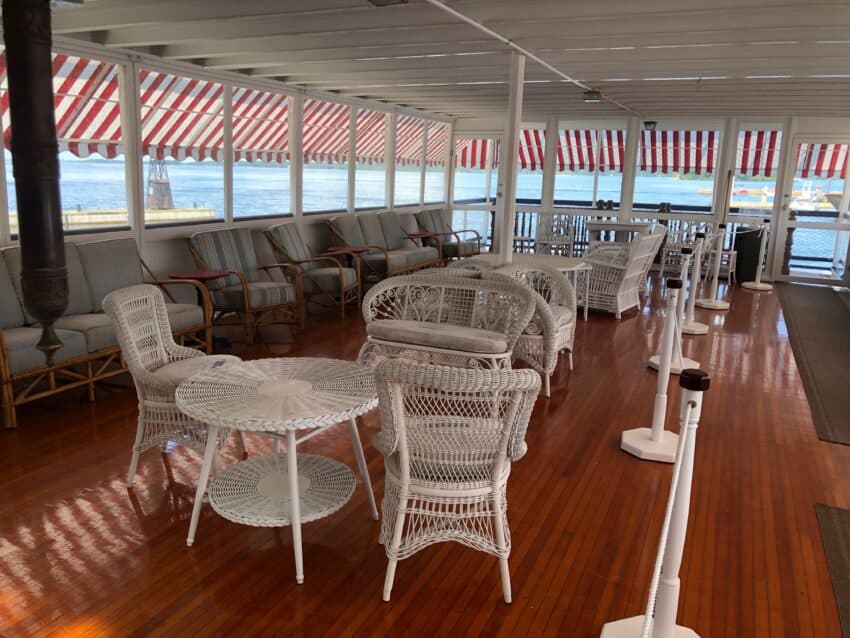 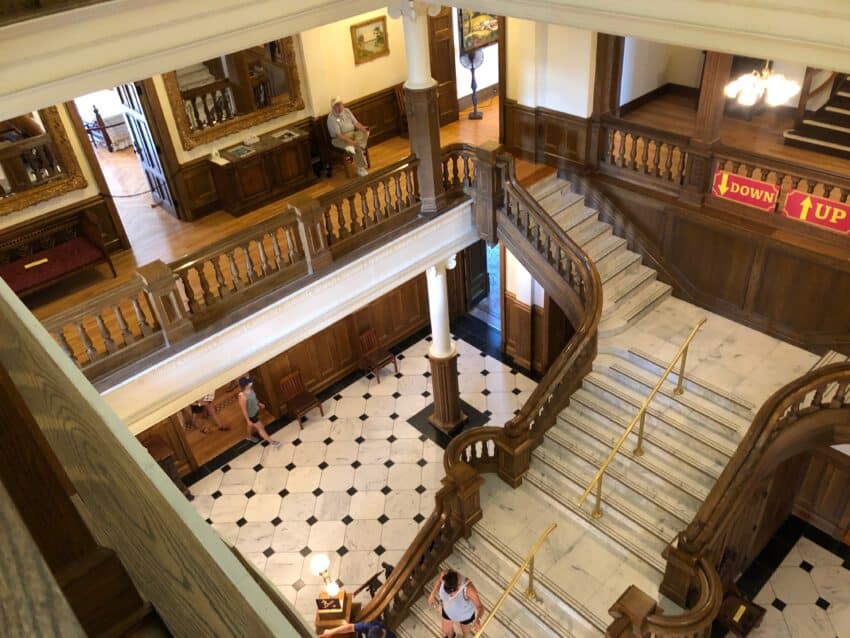 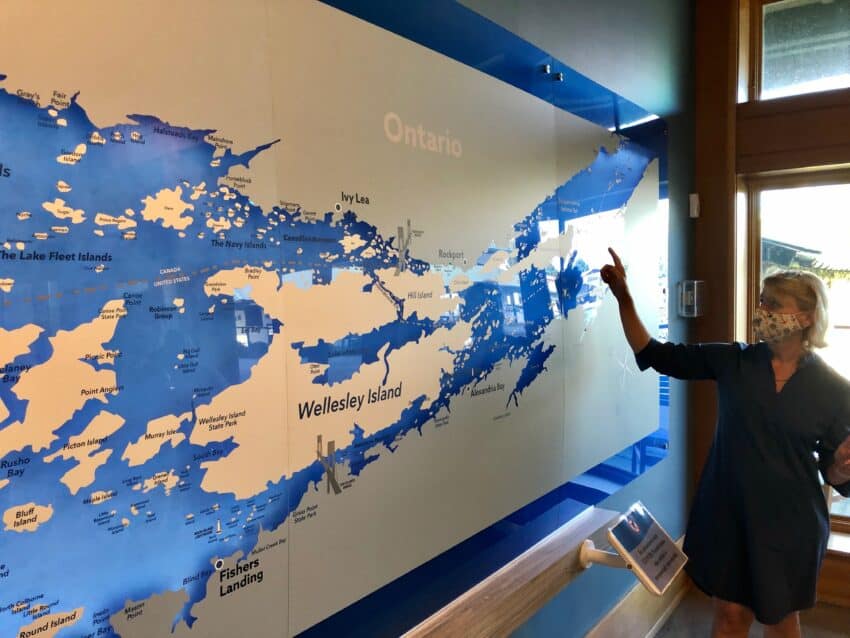 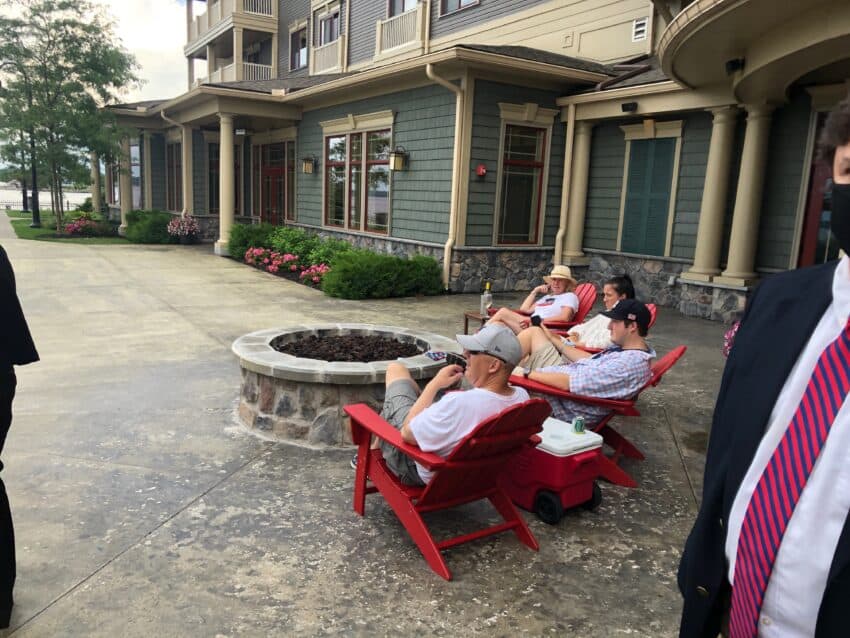 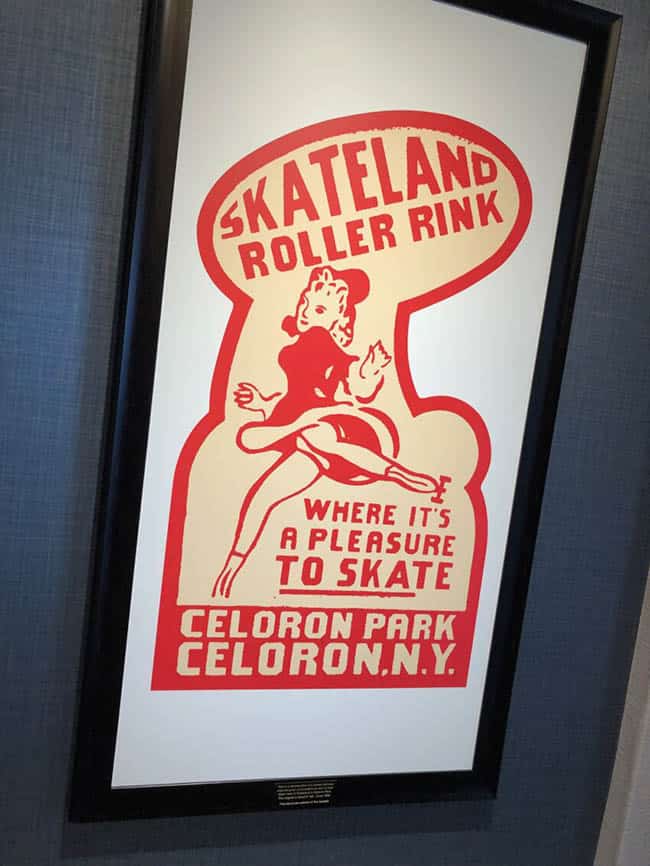 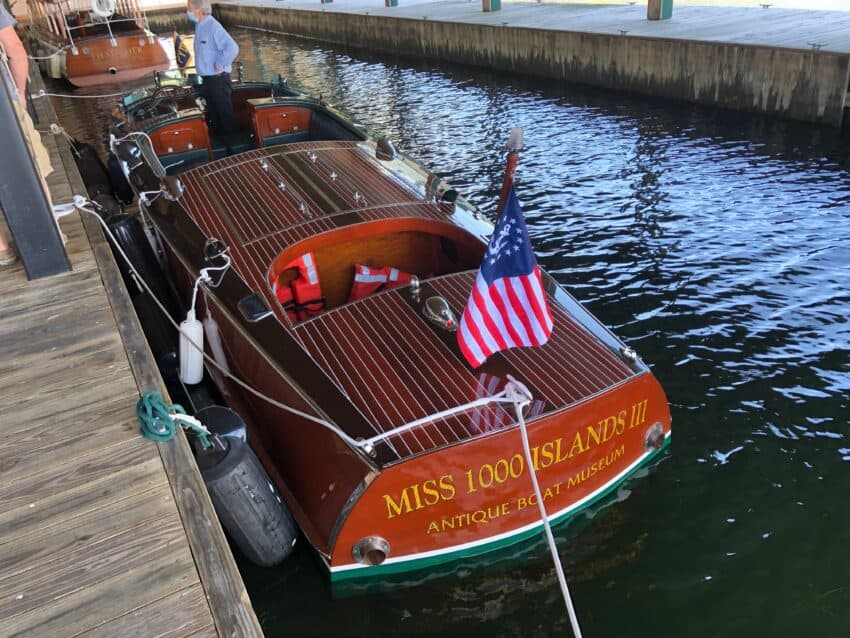 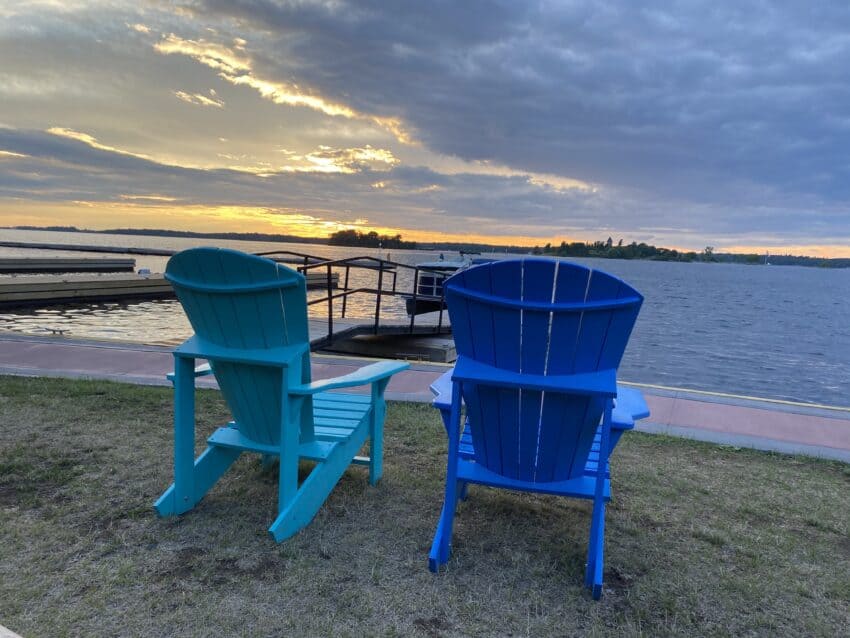 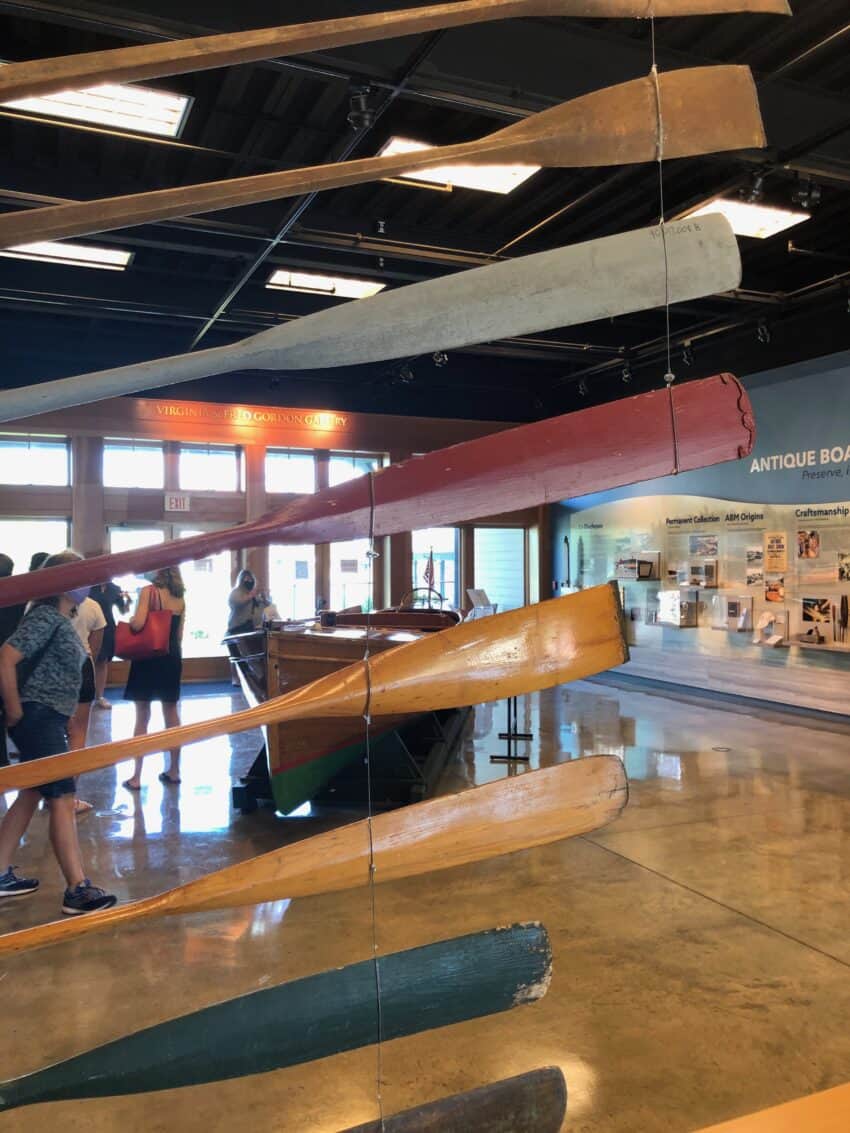 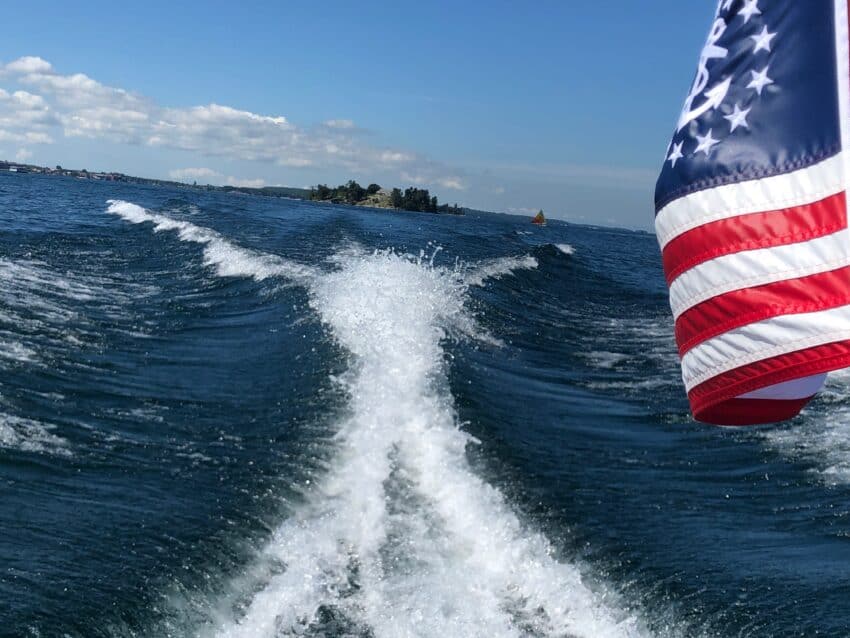 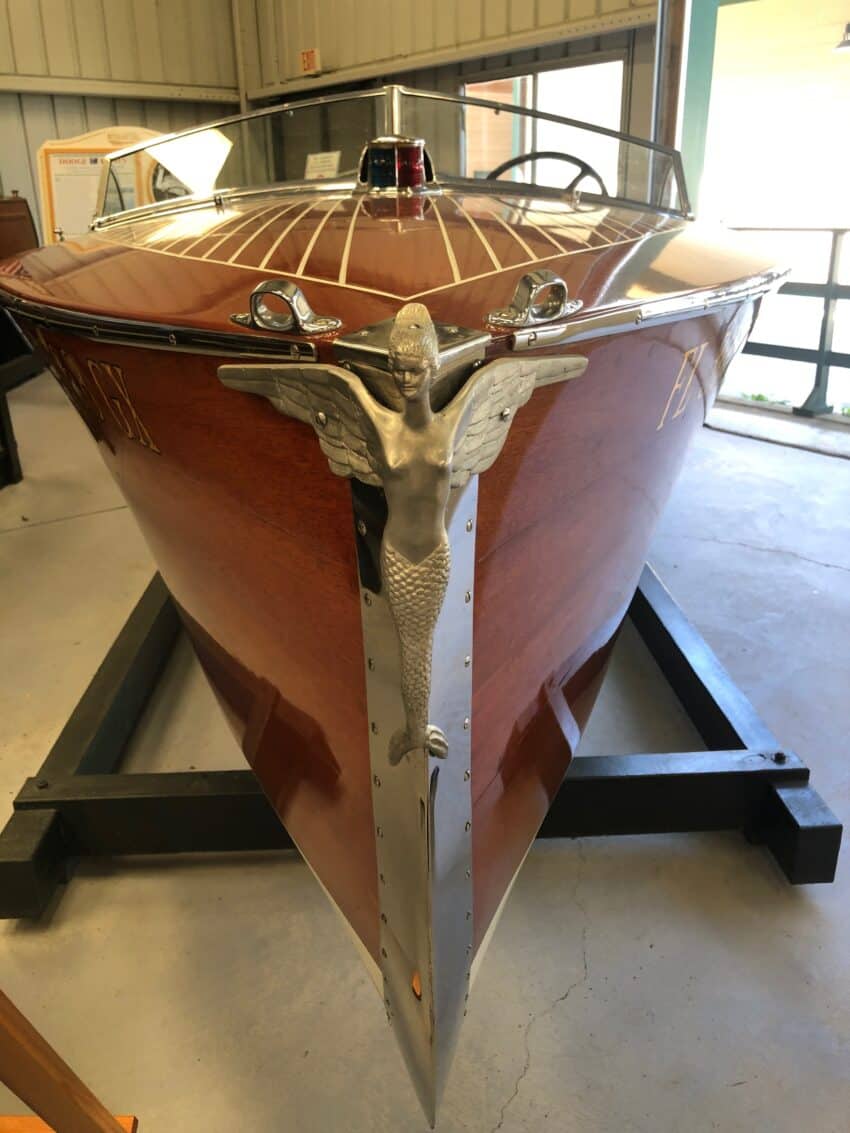 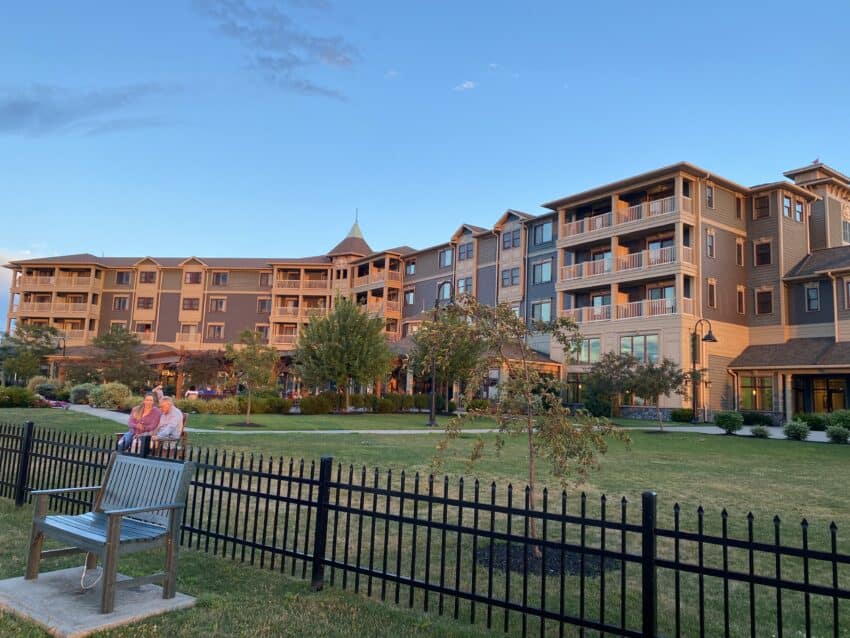 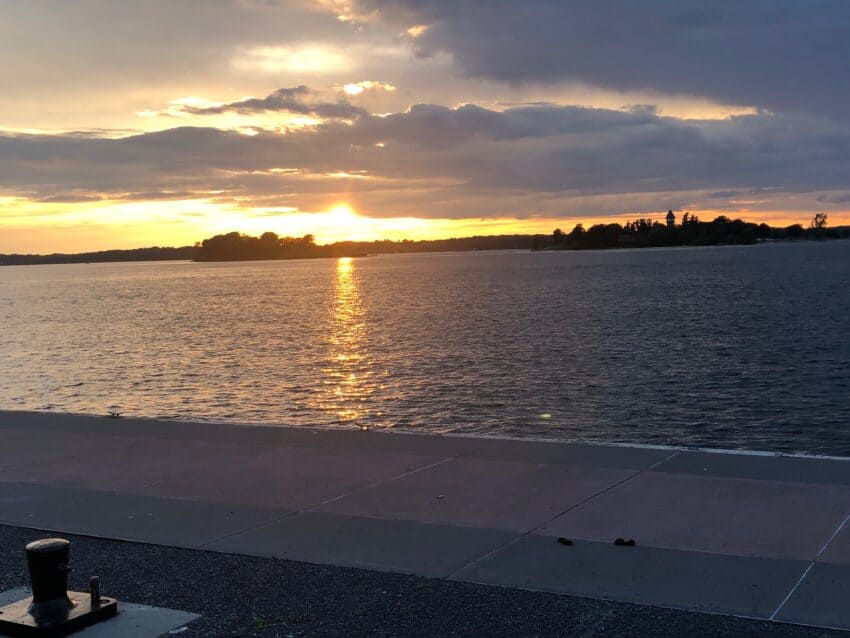 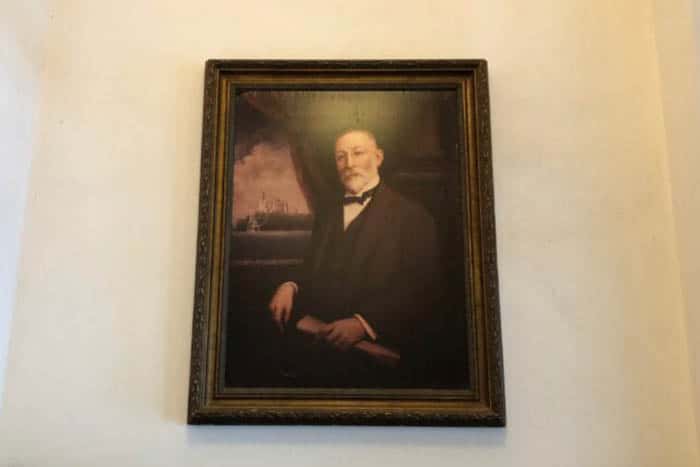 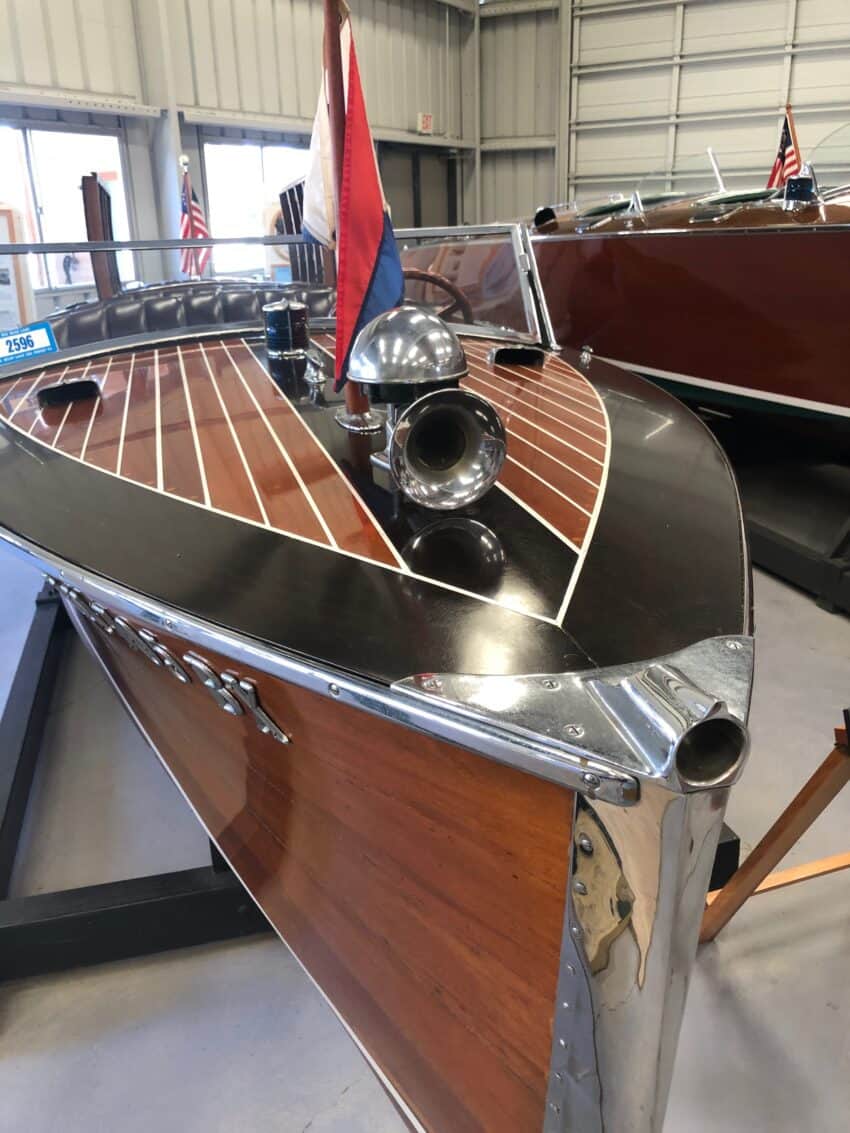