A local man poses for a shot.

I met my guide Mouad after stiffly crawling out of the rear section of the minivan I’d been careening through the High Atlas Mountains in for the better part of five hours. This would be a fairly quick sightseeing stop at Aït-Ben-Haddou Kasbah — which, admittedly, I had not heard of before.

Smiling broadly to reveal a smattering of teeth, the sweet, energetic old man grasped my hand with all of his bent, sun-leathered fingers and wagged it up and down vigorously. “Very happy I meet you!”

Then he abruptly twirled on his heels and marched away from the dust-crusted van in the direction of the Kasbah (also called a Ksar), which crowned a nearby hilltop. “Come! I show you!” he barked gleefully over his shoulder.

I dashed to catch up.

The Star Quality of Aït-Ben-Haddou

We stormed through the ‘newer’ section of town, which to me appeared impossibly ancient, where Mouad had lived his entire life. As we strode along, my guide recounted the basic facts about the Kasbah.

Located in the Province of Ouarzazate, this UNESCO World Heritage site first began to form in the mid-1600s. It was a former Sahara Desert caravan route, a stopover on the way to Marrakech. It’s since become world-famous for being the most well-preserved example of southern Moroccan earthen architecture in the Ounila Valley.

There is, however, another reason for its fame — which I’d be learning about shortly.

The red-toned dirt alleys of Mouad’s village came to a halt at the edge of a shallow mountain river, which had once been deep and flowing. We weaved around locals gathered at the water’s edge to attend to various washing.

I followed Mouad as he skittered like a flitting moth across a precarious bridge of hardened sandbags, stacked at 1-foot intervals.

The Star Quality of Aït-Ben-Haddou

Safely on the other side, I was lead to a small shaded stand where nailed to the mud wall, was a framed, faded photograph of the Kasbah. Also posted was a framed chronological list of all the movies and TV shows that had been filmed here. (Read another story about the Draa Valley on GoNOMAD)

This was the site’s most irresistible claim to fame.

Mouad’s eyes gleamed and he nearly danced in place with pride as he read all 27 titles, starting with Lawrence of Arabia (1960/1961) and ending with Game of Thrones (2012). Other prominent titles included Indiana Jones and the Last Crusade, Gladiator, The Mummy, and Babel. Being a fairly major film buff, I was admittedly fairly excited myself — especially since these were some of my favorite films.

Then he pointed at a vacant circular area at the base of the hillside and told me this is where they shot one of the early gladiator fight scenes in Gladiator. It didn’t look like much to me. “All they build, then take down,” my guide said with a flourish of accompanying hand motions.

I scrambled up the well-trodden switchback steps of Aït-Ben-Haddou after Mouad, who told me about how the walls and were made from wood and a mixture of the area’s red clay and bits of dried straw.

We snaked swiftly through slim passages, stepping over thresholds of cramped doorways, in and out of what used to be family homes.

Where Cooking Fires Once Sparked

I spotted smoke-blackened niches where kitchen cooking fires once sparked and storage rooms where the ground had been bowled out to keep foods like wheat and corn.
I mentally flipped through scenes from the movies that had been made here to figure out if I could recognize anything. That room might have been in Babel, I thought as we passed a larger open room. Some parts appeared vaguely familiar, possibly from Lawrence of Arabia?

A set of steps leading through an archway opened up into what looked like a private farm… still in use. A cow glanced up at us, then disinterested, returned to the manger of hay in its tiny pen. A goat bleated from its rope tether and several chickens flapped about, pecking at the ground.

“Mouad… do people still live here?” I asked, shocked to see signs of life when the rest of the complex appeared to be abandoned.

Where were they? I had no idea. It seemed like a lonely — albeit beautiful — place to live.

Finally, after around 45 minutes of climbing and exploring, we reached the pinnacle of Aït-Ben-Haddou. A single, thick-walled, windowless room towered above the Kasbah. A colossal wooden door that was who knew how many centuries old, ornamented with a heavy padlock, marked the only way in.

“This is treasury,” Mouad whispered dramatically, gripping my elbow for added effect, “where allll king’s gold is go. All rulers at Aït-Ben-Haddou; they gold, they silver, they jewels… is go inside! And nobody, they can not get it.” The old man finished his monologue with a twinkle in his eye and a triumphant toothless smile.

I couldn’t help but chuckle triumphantly with him at the conclusion of his grand story. I circled the top of the treasury. My gaze fell over the Kasbah and out to the Ounila Valley, which unrolled like a dusty reddish carpet to the distant Atlas Mountains.

The scene was every bit as epic as a great Hollywood movie. 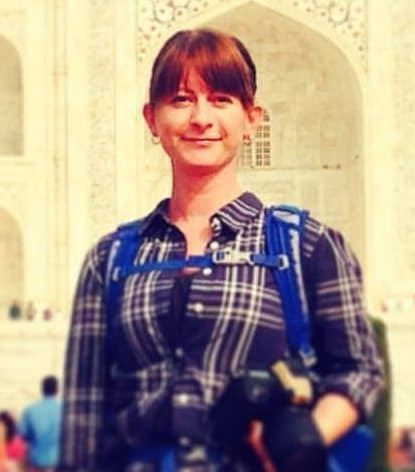 Kirsten Smith is a freelance writer and photographer from San Francisco, California. Currently, she’s country-hopping and picture-snapping her way around the planet during a year-long career break. Follow her journey at her travel blog.

Read another story by Kirsten Smith: