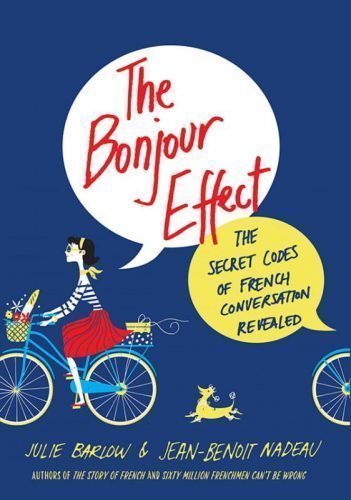 In The Bonjour Effect: The Secret Codes of French Conversation Revealed, Julie Barlow and Jean-Benoît Nadeau unravel the mysteries of French conversation. They take readers beyond what the French are actually saying toexplain what it is they really mean. Nadeau and Barlow spent a decade traveling back and forth to Paris as well as living there.

Yet one important lesson never seemed to sink in: how to communicate comfortably with the French, even when you speak their language. The authors offer up all the lessons they learned and explain, in a book as fizzy as a bottle of the finest French champagne, the most important aspect of all: the French don’t communicate, they converse.

Excerpt from the book:

All cultures have distinct ways of saying no. Not all of them include actually saying no. The British and Americans pad refusals with expressions like “I hear you” or “I understand what you are saying.” The Japanese never say the word “no” when they are speaking to a superior or to a client; instead, they hem and haw until their collocutor picks up the cue and provides them with a way out.

In situations that require politeness or deference, “no” can be dressed up in perplexing phrases like “Ça ne va pas être possible” (That will not be possible), or sometimes even “C’est la France” (That’s France for you). In other situations, the French can turn a no into a categorical refusal with expressions like “Pas question” (It’s out of the question), or our favorite, “Ça n’existe pas” (It doesn’t exist). The most polite form of “no” is “je suis désolée” (I’m very sorry).

Whatever its form, non is a foundational concept in French culture. It’s actually something of a republican reflex: the French Revolution was about the irrevocable right of all citizens to refuse, and non has a quality of revanche des petits contre les grands (revenge of the underclasses) that seems to satisfy the inner peasant or proletarian in every French person, of any class.

But the non reflex is more than revolutionary romanticism. Non is how the French express and emphasize authority, whether at home or at work. French children are raised in the belief that what has not been explicitly authorized has by default been denied. Saying non means you are in charge, and being in charge means you say non.

Non, for that matter, is one of the key ingredients of France’s deeply entrenched tradition of bureaucratic obstinacy—even the French know this. In 2013, we watched in awe as the French government tried to force bureaucrats to start saying yes. France passed a law stipulating that all queries to the government would have to be answered within sixty days—revolutionary enough in itself—and if this didn’t happen, the official answer, by default, would be yes—yes. We didn’t have time to see whether this initiative had any effect.

It’s hard to imagine it will. The French even say non to non. Between the French oui and non, there is si, an interesting nuance, completely absent from the English lexicon. Si is often translated as “yes,” but its grammatical purpose is actually to contradict a negative statement. For the question, “Luc n’est pas venu? ” (Didn’t Luc come?), the proper response—if it turns out that he did—is si. In other words, instead of saying yes, the French have a word that says non twice.

Luckily, non is often a oui in disguise. The trick is figuring out how to turn no into yes. Although its uses are broad, there is really only one thing outsiders need to grasp. The French don’t take non for an answer, and neither should you. It’s difficult for foreigners to desensitize themselves to the sting of the non, which sounds like a refusal to engage.

In fact, non is the opposite. When the French vehemently disagree with something, non doesn’t mean the conversation is over. It’s more like a conversation starter, a bargaining position, or an invitation to make a counteroffer. The mistake is to consider non a stone wall when it actually operates like a trampoline.

Like negotiations with Mediterranean merchants—and the French do share that heritage—interactions in France tend to begin when two parties have laid their positions on the table. Non is what gets things rolling. If everyone agrees, there’s nothing to talk about. (Paradoxically, talking is even the key to understanding when a French person doesn’t want to talk to you. The French don’t send the signal with body language or facial expressions. When French really don’t want to talk to you, they don’t open their mouths. To them, the message is loud and clear.)

The best thing to do when facing a firm French no is to keep talking. The lessons came flying back to Julie when she went to buy her first Paris subway pass. Transport is not exactly a free market in Paris. Monthly bus and metro passes are only available to Parisians who can prove with a utility bill that they live there. Unfortunately, Julie only recalled this after she had made the thirty-minute trip to the Opéra metro station to buy her pass. But she thought it was worth trying to talk her way into a pass. She started explaining to the young woman behind the ticket counter: “I live in Paris. But I just moved here. So I don’t have my justificatif de domicile [proof of address] with me.”

“Je suis désolée madame,” the agent replied. It was that gently wrapped no. But Julie could tell from the clerk’s body language that the door was still open. Julie had used some key French terminology—justificatif de domicile—and it was a good start. She scoured her mind for other bureaucratic buzzwords that might break the agent’s resistance. “I don’t have my lease with me because my husband has it.

He went to get our Carte Vitale [France’s health card] at the Caisse primaire d’assurance maladie [Health Insurance Primary Fund],” she said. The bureaucratic brand names worked their magic. The agent was still shaking her head, but more gently, so Julie soldiered on. She pulled our daughters up to her side and talked about how fortunate we were to have a school that was right across the street from our apartment.“What school do your daughters attend?” the agent asked brightly. Julie named the school.

The receptionist turned to her computer and crosschecked it with our address, then smiled and took Julie’s photo. “Welcome to Paris,” she said. “What do you think of the French school system?”

Sometimes the French say no out of pure gamesmanship. It’s a curious cultural difference: in some cultures (like ours) agreement can actually lead to sharing and comparing stories. But to the French, “yes” often sounds like a dead end. A frank non is a better show of spirit than automatic acquiescence, and it often sparks a discussion. But there is more to the French non than just verbal jousting, and foreigners should never take no for an answer in France until they have figured out what it actually means.

Jean-Benoit Nadeau and Julie Barlow are the award-winning authors of The Story of French, The Story of Spanish, and the bestselling Sixty Million Frenchmen Can’t Be Wrong. They live in Canada. Buy this book on Amazon: The Bonjour Effect: The Secret Codes of French Conversation Revealed