Florida: Cycling the Keys to the End

Cycling the Keys in Florida from Miami

The 160-mile stretch from Miami to Key West has long been regarded as a classic American road trip.

While it is most often crossed by tourists in their rental cars and RVs, only a daring few undertake the journey on a bike each year, cycling the Keys is not a common thing to do.

Along the way, travelers bear witness to the scenery where countless television series and movies have been filmed, and where the high energy of Miami slowly fades into quiet island life.

For those seeking an overnight cycling trip that is both rich in beauty and demands endurance, it doesn’t get much better than this. Here are some spots to check out along the way.

A 6:00 AM start on day one is advisable in order to set a good pace, and watching the sunrise from South Pointe Park is a perfect venue for kicking things off.

With a commanding view of the downtown Miami skyline and the Atlantic Ocean, visitors immediately feel the magic of South Beach.

Now just hop onto the MacArthur Causeway, connect to US Highway 1, and it’s a straight shot to the Keys.

Home to several opening scenes and car chase sequences in the 1980s TV crime show, Miami Vice, the trendy neighborhood of Brickell remains architecturally gorgeous and a reminder of why Miami is one of America’s coolest cities.

At the height of the 1980’s cocaine epidemic which attracted massive foreign investment, Brickell Avenue hosted 44 American banks and 36 local branches of foreign banks. People around here appreciate the finer things in life, which is probably why a local operative of a Colombian drug cartel responsible for distributing 15,000 pounds of cocaine lived in a posh Brickell condo until it was confiscated by authorities.

No trip to Florida is complete without spotting a gator, and visitors can see a whole lot of them at the Everglades Alligator Farm. Brave guests can hold baby alligators and snakes, or step back and watch a professional handler educate the crowd on adult alligator behavior. Try an early morning airboat ride for some added fun.

Located only a few miles off the coast of Key Largo inside the John Pennekamp Coral Reef State Park is the Christ of the Abyss statue, a symbol of inspiration to all those who explore and adore the sea.

Resting in 20 feet of water, the statue is accessible to both snorkelers and divers alike, allowing for easy underwater discovery amidst a variety of sea life.

The side trip takes a half-day, so cyclists wanting to make good time can alternatively stop at an outdoor farmers market in Key Largo for lunch and continue onward.

For those feeling worn down, this easily accessible roadside beach offers a great opportunity to instantly rejuvenate by jumping into bathtub temperature turquoise waters. Certain sections are so shallow that even non-swimmers can walk as much as fifty feet out.

Animal lovers cycling the Keys should check out the Dolphin Research Center, a 501(c)(3) non-profit that houses several dolphins and sea lions who were either rescued, rehabilitated, deemed unreleasable by state governments, or born at the facility.

Those looking to fulfill a lifelong dream of swimming with dolphins may have found the right place. General admission is $28, and prices for meeting the animals vary according to the program.

Sea turtles are largely an endangered species, and the good people at The Turtle Hospital have treated and released over 1,500 of them since opening their doors in 1986. In addition, the facility maintains quarters for permanent residents who are allowed to peacefully live for the rest of their lives after suffering catastrophic injuries. Daily tours are offered, and admission is $18.

Crossing the longest bridge in the Keys on a bicycle is a feat best done carefully and with plenty of daylight, especially when taking into account its historical reputation for fatal accidents.

Perhaps the best time to hurry on over is in the early morning hours when there is little traffic and good visibility.

Seven Mile Bridge represents the final push to Key West, which is only 40 miles away.

In a memorable finale, cyclists reach the end of US Highway 1 which begins a world away in Maine and connects the eastern seaboard of the United States. A photo to capture the moment is mandatory. It’s the end of the road, but only until the next adventure begins.

-The route can be attempted year-round, but winter offers better temperatures.

-Check the weather before you go to ensure dry, sunny conditions.

-Drink water regularly and before you become thirsty in order to avoid the nasty effects of dehydration.

-Those planning on sticking around Key West for a while should take a guided tour of The Ernest Hemingway Home & Museum to learn about one of the 20th century’s greatest adventurers.

-To get back to Miami, you can either rent a car at Key West International Airport or take a bus for $29. Depending on traffic, the drive will take about four hours. If you’re really hardcore, you can ride your bike home.

Tips on Cycling the Keys from Wandering Rose Travels 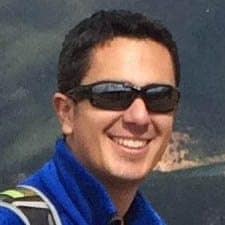 Dennis Lawrence is a consultant and freelance journalist. He lives in Denver.