There was once a time when an innocent day’s bird-watching in Manhattan’s Central Park could result in ticking off something far raunchier than a great crested flycatcher or black-capped chickadee.

In the ’80s and ’90s, the secluded area of the 800-acre park known as the Ramble, as well as being a bird magnet, was also a notorious cruising ground for men.

The clampdown by Authorities in Central Park

In recent years, however, a clampdown by the authorities has meant that nowadays such frolicking is a thing of the past, although it still gets a two-star rating on certain websites. For birding though, it gets the full five stars!

The Ramble is one of the wilder and more forested areas of Central Park. The perfect retreat for New Yorkers looking to escape the hustle and bustle of the city is also one of the best bird-watching locations in America.

Some 230 species of bird have been spotted in Central Park. Along with resident warblers and songbirds, not omitting the famous red-tailed hawks, Manhattan‘s largest green space lies on a flight path for migrant birds traveling up or down the east coast looking to check in after a long journey.

Flying above a vast urban sprawl, this rectangle of greenery is the perfect place to touch down – the JFK for birds – with its Michelin menu of seeds, berries, rodents, and insects to feast upon.

We’d touched down on a Saturday night following a flight from London, but the jetlag meant we were up bright and early on the sunny November Sunday morning, perfect to get to the Turtle Pond for 9 am in time for one of Bob’s weekly bird walks.

Except Bob was away, so we were led around by a more than affable chap called Jeff. We arrived late due to a bagel stop-off, but it didn’t take us long to find them.

Central Park by this time was packed with joggers and dog walkers, but all we needed to do was spot the group of people looking up a tree. For just $10 each, we were in for a three-hour birding trip round Central Park. With Manhattan’s skyline looming in the near distance, it was as great an introduction to NYC as any.

We quickly began ticking off the birds, pretty much all of which were lifers (that’s bird-speak for species you’ve never seen before). A palm warbler perched on a fence was soon followed by a song sparrow in the long grass; a tufted titmouse lurked on the bottom of a tree trunk; a catbird prowled through the leaves on the ground; a white-breasted nuthatch sneaked down a tree; a house finch tucked into a juicy red apple.

We headed to the lake where Jeff took us through a variety of waterbird activities. Highlights included shoveler, gadwall, and bufflehead. Moving back into the park, it wasn’t just birds we encountered.

A furry little creature shot up a tree and curiously watched over us while munching away at the pick ‘n’ mix of berries. It’s a racoon, our companions muttered dismissively. While we were transfixed, the others reacted with scorn. Apparently racoons are real pests over here, always rooting through the trash can, leaving a mess in their wake. For us it was a cuddly creature photo opportunity.

It was the red-tailed hawks that we had come for, and Central Park is renowned for them. Its most famous resident, nicknamed Pale Male, made the unusual move of nesting on a building in 5th Avenue rather than a tree, becoming one of the first urban hawks. He was the subject of international media coverage and public outcry when the co-op board at number 927 voted to remove the hawks’ nest from their building back in 2004.

A hasty u-turn meant the anti-pigeon spikes anchoring the nest that had been removed were reinstated, and a month later, Pale Male and one of his many mates were back. Over 10 years he’s said to have produced 26 offspring.

And it’s not just in Central Park you’ll find the hawks. A recent study by the US’s National Audubon Society found them at 32 locations across NYC. We later came across one in Chinatown, perched just yards away from us.

Back on the walk, we arrived in a warren of winding paths working their way through a densely wooded area of lush forestry. All of a sudden the skyscrapers had disappeared and we were in the thick of nature.

This was the Ramble, a 36-acre section of Central Park lying between 73rd and 78th streets, that the park’s architect envisaged as “a wild garden”. It’s easy to get lost in the Ramble, and an easy place to hide too.

The thick cover provided by the sprawling overgrown vegetation which provides the perfect conditions for birds to thrive in became a popular haunt for cruisers looking for a casual encounter.

While this is said to now be no longer the case, a New York Times article as recent as 2012 suggested cruising was alive and well in the Ramble, reporting condoms strewn across the ground when their reporter paid a visit.

Our visit was about as sordid and explicit as Bambi, in comparison to the newspaper’s depiction of seediness and promiscuity. Then again it was a Sunday morning.

We did see a few birds though. The numerous feeders hanging from trees helped, with blue jays and northern cardinals among the regulars flying by. They weren’t shy either, seeming to be used to human presence, and happy to pose for a photo.

We left the Ramble and by this point were coming to the end of Jeff’s walk. We passed by Strawberry Fields, and the ring of tourists surrounding the Imagine mosaic, quickly jolting us back into the reality of where we were.

A Canadian man in our group was trying to talk to me about the difference between pigeons in the UK and North America.

A New Yorker who was a regular on these walks told me, on learning that I was originally from near Liverpool, that Central Park was in fact modeled on Birkenhead Park (the two places couldn’t be socio-culturally further apart).

And then out of nowhere a flash of white swooped above us. There it was, one of Central Park’s legendary red-tailed hawks. Armed with a long lens in hand, I pulled the trigger and managed to capture a series of shots of this glorious raptor in flight, as it soared directly overhead before careering into the distance. Was it Pale Male? Probably not.

Throughout our visit to NYC, the raptors were never far away. A look up to the sky often identified that distinctive glide. Whether it was a boat trip on the Hudson, a glance through the windows of the MOMA, that wander through Chinatown, there these wonderful creatures were, while the millions down below passed by in complete and unashamed ignorance.

Watch a video of Bob the Birdman of Central Park produced by newyorklives.tv 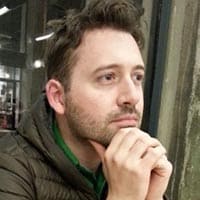 David Mills is a London-based freelance writer whose interests include travel, birds, and photography. Some of his work can be seen at davidmills83.tumblr.com