Topi Pekkanen, sommelier and one of the three owners of Kaskis restaurant in Turku, sat down to talk with us after the rush of the evening dinner service has subsided, he is tired.

Considered by many to be the new best restaurant in Finland, they have been working 22 hours a day, six days a week. They have been sold out every night for the past two months and are booked solid for the next two.

A beautiful historic and university town on the southwest coast and only a two-hour drive from the capital, Helsinki, Turku has a thriving new restaurant scene.

He talks about the change. Six to ten years ago, going out to dinner was simply not a Finnish pastime, and if you did, it was always just for pepper steak.  Fried cod, new potatoes, and dill.

Kaskis is not a pretentious place, it is modest, bistro-like, comfortable and understated, much like the Finnish people. They let their food do the talking, and it speaks volumes.

He said that the rules the restaurant abides by are simple, there are none. No rules, no limits. They want to make good food, done by hand, locally sourced, organic when possible and reasonably priced. We want you to leave full and satisfied.”

Whatever modesty may be present in the Finns personal demeanor, or the sharp minimalist lines of their legendary design, the plates were bold works of art. Beautiful, skillfully executed and often abstract.

Although the entire tasting menu was memorable, and the final dish of 36-hour braised beef cheek was fantastic, one dish is etched in my flavor memory: Green and white asparagus, some lightly grilled, some cut into thin ribbons, curled, resembling calamari, cooked just enough to accentuate the flavor without destroying the integrity of the product.

Accompanied by roasted cherry tomatoes red quinoa cooked in asparagus broth, a tapenade of olives, sprinkled with fresh herbs, and dressed with Argentinian olive oil and basil infused vinegar. It was, my traveling buddy Max Hartshorne and I agreed a masterpiece.

Simple ingredients at their peak of freshness, skillfully combined, and expertly “nudged” to their maximum flavor. It seems so easy and is so hard to do.
In the early 1970”s Finland embarked on a public education initiative to reduce intake of salt and fat to combat rising coronary disease. The effort took hold and changed an entire country’s eating habits.

What is obvious at Kaskis and at the majority restaurants I went to was that they did not rely on finishing sauces with butter or cream, but rather, built depth and flavor through reductions. Pia Jääskeläinen from Atelje Finne in Helsinki said it best when I asked her to describe Finnish food. “ Subtle flavors that leave a lasting impression”

Topi makes one final statement before the evening ends. “We have a great community of restaurants, we all hang out together. Within 2 years, Turko will be the gastronomic capital of Finland.”

At Ludu, also in Turku, owner and chef Joonas Sippo shares Topis enthusiasm for his fellow chefs and restaurateurs on the Turku scene. “ we drink together and visit each other’s places.” Ludu has an old new york speakeasy feel.

With a black and white color scheme, the piano doubles as the bar. We had the batter fried whitefish with new potatoes and dill, and braised chicken with roasted parsnips and risotto.

At Smors Chef Janne Juvonen owner of three restaurants in Turku, arrived two years ago because of the burgeoning food scene and the cooperation among restaurant owners.

Smors has more of a fine dining feel. The service, food and wine pairings were exquisite.

Other eats in Turku

Check out the Martinsillan Grilli, which are kiosks. All over the Nordic countries and Scandinavia, there is a hot dog tradition that seriously rivals the United States.

A thick, soft steamed bun with two steamed hot dogs, (the kind that go “pop” in your mouth), crunchy fried onions and garlic, pickles and a mayo/sweet chili sauce, really good and worth the eight-hour flight from NY.

Stylish and cozy with a fantastic lunch buffet on the banks of the aura river.

Breakfast is a huge deal in Finland. we stayed at the Hotel Scandic Julia in the center of town. The breakfast buffet was fresh and varied: oatmeal porridge, yogurt, nut and berry toppings. Also, beautiful dark rye bread, scrambled eggs, beans, potatoes marinated herring, smoked salmon, ham, cheeses, fresh fruits etc. There was too much to mention and far too much to consume.

A historic coastal port town and popular summer vacation spot, the Finnish coastline is still adorned with ornate wooden spas and villas built in the 19th century, some that still offer rooms. We stayed at Hotel Villa Maija, a truly fantastic place. The rooms are beautifully restored and they also have a killer breakfast buffet to fuel a traveler’s day.

Lunch in a Finnish Home

We were honored to have lunch at the home of Leena and Timo Immonen. She is a local tourist guide and he is a retired industrialist who is now a prolific writer. She made a traditional springtime dish of Graavilohi (salt-cured salmon), new potatoes dill and ribbons of creamy Finnish butter.

Back at my home in the USA, those ingredients would have never ended up together on one fork. A little salt from the salmon, sweet from the butter, the potato offers depth and the dill brightens your tongue with the taste of spring.

It was Finland in a bite.  Leena Immonen makes a traditional springtime dish of Graavilohi (salt-cured salmon), new potatoes, butter and dill at her home in Hanko.

I noticed that after Timo boiled and drained the potatoes, he put them back in the pot to keep them warm and placed a paper towel under the lid to keep any steam from condensing and dripping back on them. He was emphatic, “ They must be totally dry when you serve them.” A Neat little trick.

In Hanko Teemu Sandin has constructed a wood-fired sauna on wheels that he hauls with a bright red tractor to sweet spots on the Baltic sea. Saunas in Finland are a big deal and most homes have one.

I even went to a business center that had one attached to a conference room. It is where they socialize, do business and recoup during the cold winter months. The health benefits are obvious, cleansing, you feel completely rejuvenated afterward, but the community building they offer is equally important.

The tradition for Teemu and his friends is simple–find a good spot, fire up the sauna, drink a lot of beer and grill sausages. Let’s just say that when you get naked and sweat at 160 degrees with a group of strangers, you do not remain strangers for very long.

Maybe it was because of sweating out all the fluid and salt in my body, but those were the most refreshing beers and best damn sausages I have ever had. They’re typically served naked, with just a napkin–no buns needed, nor given.

Antti Tuomola pulls up to the dock in a small powerboat to ferry me and our little group to Paven restaurant in the archipelago near the city Espoo, just outside Helsinki.

It is a quick, brisk ride to the rocky outcrop where this historic restaurant, built in the 1900’s, looks out over the water.
Antti is head chef and manager and after disembarking runs to the kitchen. A half-hour later, he reappears having made us a fantastic lunch.

The founder of Restaurant day, Antti is first and foremost a wonderful chef. In a typical Finnish manner, he is low-key about such a huge accomplishment. He won’t even be in Helsinki the next day, when the parks streets and homes of will host thousands of people sampling the plethora of one day pop up restaurants.

Since its creation in 2011, Restaurant Day has spread to 68 different countries.

The next day, we head out to the streets and parks of Helsinki and merge with the crowds eating Finland. Antti explained to us that the origins of Restaurant Day are really a rebellion against how many laws there are to open a new restaurant.

The Finns are very tolerant of regulations, but one day Antti got together with his friends and hit a nerve. “What if we just decided to let anyone who wants to open their own pop-up restaurant on a special day, and there would be no rules?”

Well, they tried it out, starting with just a Facebook page, and today, it’s a phenomenon, with 2700 stands popping up four times a year.

Read Max Hartshorne’s story on our trip to together to Finland:

How to get there:
FINNAIR 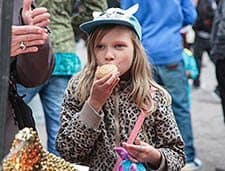 Paul Shoul is a Northampton, MA-based photographer who doubles as a staff writer for GoNOMAD. For thirty years he’s lived in the Pioneer Valley and chronicled life there through his work in the Valley Advocate. He’s also been seen in the Boston Globe, New York Times, BBC, the Chronicle of Higher Education and many other publications. Today as well as shooting around the world for GoNOMAD he works for local nonprofits, banks and advertising agencies.