Lodging with a German Flare

Entering the lobby of Zehnder’s Splash Village Hotel and Waterparktransports you to the forests of Grimm’s fairytales. Large trees and decorative mushrooms create a lobby reminiscent of gnomes and the Black Forest.

There’s just enough time to run over to the bucket and be doused. Float along Crooked Brook Crazy Creek in rafts designed for one or two. But, beware water may fall when least expected!

A toddler pool with two small purple slides, basketball in the fun pool, and the dragon fly pond with lily padsare all designed to enhance the Bavarian fairy tale décor. A play place with squirt guns, water tubes and another yellow slide add to the fun.Kids highly recommend slushes from the poolside snack bar.Mom and Dad can soak in the family-friendly hot tub. Or if you prefer a calmer pool find the standardindoor pool available in Zehnder’s Tower Building.

Be sure to plan your hotel arrival carefully. Once you are there,children won’t want to leave. Even though check-in time is 4:00 p.m., you can begin playing at the waterpark as early as Noon. Check-out by 11:00 am and continue to play until 4:00 p.m. on departure day.

At Frankenmuth Visitor Center pick-up a Frankenmuth Gnome Guide. Our family used this as a register for gnome hunting during our stay. Find at least ten gnomes to receive prizes at the Frankenmuth Visitor Center. The first terracotta gnomes were factory-made in the 1800s in a southern German town called Graeferoda. It’s estimated that over 25 million garden gnomes live in German flowerbeds and living rooms. German folklore says that these cheery and helpful beings bring good luck.Learn more about Frankenmuth’s Gnomes!

We stopped by theBavarian Inn Lodge to try out the only known Bavarian themed mini-golf course outside of Bavaria. The 18-hole indoor course is an ideal activity for rainy days or frosty Michigan winters.

Frankenmuth Historical Museumisan interactive museum celebratingFrankenmuth’s German heritage. Push the button for narration in each of seven galleries. My granddaughter experienced butter churning, the weight of a water yoke, and drew a house of Alpine architecture.  The permanent museum includes an authentic log house, historic performance hall and a reproduction of a 19th century mill.Plan an hour at the museum.  The $5.00 family admission also includes the Lager Mill Beer Museumwith its brewing exhibit.

An organ concert greeted us as we entered St. Lorenz Church for our self-guided tour. Church lobby brochures provide direction for the tour. Use stain glass windows like pictures from a colorful story book to tell children Frankenmuth’s story. The organist took time from his practice to explain some of the church’s history. Guided tours are also available.  Monthly German worship services still occur.

Brewing beer has been a tradition in Frankenmuth since its 1845 beginnings. It continues with modern Michigan ranking fifth in the nation for the number of microbreweries. Lager Mill Beer Museum has over 300 craft beers. Frankenmuth’s Oktoberfest is the only German government sanctioned Oktoberfest outside of Germany.

The 150 year old Frankenmuth Brewery is the oldest brewery in Michigan. The kids can try the root beer brewed on-site. If the Brew Master is wearing his root beer
T-shirt, it’s root beer brewing day. My ten year old granddaughter described it “with just a hint vanilla.” The pretzel bites with cheese and mustard dips are kid-friendly accompaniments. Adults sample beer through the French Onion soup and beer battered onion rings along with their burgers and craft beer.

Or pair a Michigan cherry salad with Hefeweizen Ale.Hourly 15-minute tours of the brewery start daily at Noon. To go with that (root) beer, every day at 2:30 pm (except holidays) the family can become German bakers and roll their own German-style pretzels at the Bavarian Inn Restaurant. Make reservations (989 652 9941) with two hour advance notice and pre-payment of $4.99 each.

Just outside Lager Mill Beer Museum pick-up a horse-drawn carriage from Fantasy Carriage Company. Our celebrity horse named Fred also pulled a carriage in the movie “The Great and Powerful Oz.” Fred and the carriage driver provided a 15-minute tour of Main Street.

While winding down from a busy day and waiting for a cruise down the Cass River on the Bavarian Belle Riverboat,stop at the perfect viewpoint to take a photo of the entire Holzbrucke (wooden covered bridge).Think of a tour down the Rhine River without the castle. However, you can see the Bavarian Inn Castle ShopsTower, a nod to the German castles along the Rhine.\

The boat leaves every hour and a half from the Frankenmuth River Place Shops. If you have a specific time you want to ride, be sure to get there early to ride on the open top second tier.This section fills up quickly.The price of the hour long cruisefor our family of four was slightly less than the 15-minute horse-drawn carriage ride.

Fountains outside Zehnder’s and the Visitor’s Center remind me of fountains found in European town squares. We arrived for dinner under the Glockenspiel clock tower, which rings four times daily outside the Frankenmuth Bavarian Inn Restaurant. While Frankenmuth is famous for fried chicken, I chose to experience traditional German Jager Schnitzel (Hunter’s Schnitzel), pork loin breaded in Parmesan cheese and seasoned breadcrumbs, topped with creamy mushroom sauce, accompanied by Kartoffelkaseknodel (potato cheese puffs).

Baskets of white bread and Stollen (fruit and nut) accompanied the meal. I thought this was traditional German bread until a German-born senior, insisted that in his homeland you would be served dark brown bread.

The next time I looked up, the German dark brown bread had magically appeared on his table. When I insisted the Stollen was German bread, he harrumphed that Stollen isn’t bread but rather Christmas cake. Nonetheless, we devoured both the “homemade” white bread and Stollen bread with strawberry rhubarb jam made from Michigan fruit.

After dinner, outside the Bavarian Inn we discovered their answer to an outdoor biergarten (beer tent). The Fischer Platzwas alive with accordion music accompanied by electric guitars. Men dressed in lederhosen and suspenders played “Edelweiss”while couples and children dancedGerman Picnic Fare

Gather picnic fare from Kern’s Sausage and some cheese at the Frankenmuth Cheese Haus to picnic in Centennial Park or on a blanket along the grassy banks of the Cass River. Another option is Willi’s Sausage for their ethnic German meats. Traditional Bavaria meets modern Michigan in their newest Braunschweiger sausage made with Michigan-raised buffalo.

For dessert, stop by Sugar High Bakery Season 7 Winner of Cupcake Wars “Ninja Turtle Episode”. In addition to tasty treats, this bakery will appeal to both boys and girls. Teenage Mutant Ninja Turtles decorate walls in homage to the Cupcake Wars Episode while the store’s basic theme is girly pink cupcake décor. In keeping with the Bavarian theme of the trip, try the Black Forest, Bavarian Cream, Haufbrau Dunkel (German Beer) cupcake or the German Chocolate cupcake (German in name only).

The Bavarian theme even extends to Frankenmuth’s McDonald’s. The exterior with half-timbered architecture includes a clock tower. The indoor décordisplaysframed photos of Germany, a welcoming brick fireplace, and private play platz.

At five minutes to four, looking for fun, we entered Frankenmuth Clock Company. This shop with over 150 cuckoo clocks has the largest selection of Black Forest German Cuckoo Clocks east of the Mississippi. At precisely four o’clock all battery operated clocks began to cuckoosimultaneously. 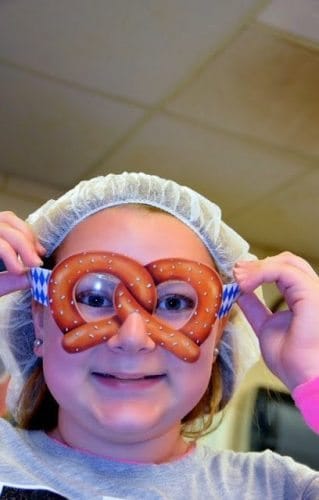 pretzel glasses, for rolling pretzels.
Four US flags fly atop the torrent of the Bavarian Inn Castle Shopsreminding us that we haven’t travelled abroad to purchase authentic Bavarian clothes, lederhosen and dirndl. The variety of shops includes a bakery with Black Forest cake and a chocolate shop. Also available are other German specialties like Lebkuchenherzenand Schmidt Christmas Lebkuchen.

Bronner’s Christmas Wonderland, the world’s largest Christmas store, celebrates the spirit of Christmas all  year long.  Wally Bronner’s (of German heritage) store began as a sign company in 1945. In a nod to the old country, today his store’s interior vaulted ceiling is planked with wood, showing off large holiday displays.

Searching for ornaments from Bavaria? The German flag, ornaments scripted with Merry Christmas in German, beer steins and German hats are all fun options to give your Christmas tree a German flare.

Because Frankenmuth evokes memories of Bavaria, before leaving visit The Michigan Shoppe at the half-timbered architecture Frankenmuth River Place Shops. This shop specializes in Michigan-made and Michigan-themed souvenirs. You’ll need a Michigan souvenir to remember that you’ve actually visited Michigan, and not Bavaria!

Amy Piper is a travel writer and photographer based in Lansing, Michigan.