The Fascinating Thuringian Forest in Germany

Germany’s emerald heart, the Thuringian Forest, is a gem set within the circle of better-known and heavily-visited cities.

Positioned behind the Iron Curtain until Germany’s 1990 reunification, the free state of Thuringia is regarded as the Green Heart of the country. The area is easy to access. A train ride of two hours or so from any major city will deposit visitors in the midst of its hills, forests, and hospitable villages.

My adult daughter and I set out to visit my father’s hometown, a small village wedged among the Thuringia hills. From the convenience of Frankfurt’s combination airport and train station, we caught an ICE (Intercity-Express) to Eisenach, a perfect base for exploring the area. Germany’s trains are smooth-riding, comfortable and punctual, allowing us to sit back and enjoy the scenery.

We were lucky enough to have relatives to chauffeur us around, but rental cars are readily available and the roads are well-maintained and clearly marked for those who venture out to explore. Local trains and buses are available for those who prefer gawking over driving.

Our favorite spot to park suitcases, besides our relatives’ house, was Eisenach. This 12th-century city is centered on the Marktplatz with the Church of St. George.

Clothing, food, and souvenir vendors group their colorful tents around the church like so many butterflies on the cobblestones. St. George can boast being the church that baptized—and later, hired as an organist—Johann Sebastian Bach, born in Eisenach in 1685.

The nearby Bachhaus Museum contains information and instruments from the composer and his family. The streets radiating out from the Marktplatz are filled with half-timbered houses, interesting little shops, and restaurants with tables and fragrances spilling out onto the sidewalks.

In pedestrian-only zones, carts serve up authentic Thuringian sausages on fresh hard rolls. The wursts extend well beyond the bread, looking like edible bicycle handles. Add a dollop of kraut and a cold beer and we found a little corner of heaven.

High above Eisenach is Wartburg Castle, which dates to 1067. Walking over the drawbridge, we saw how easily defensible the castle must have been. Successive gates and high narrow passages afforded plenty of opportunities for archers to pick off invaders. If forced into the farthest courtyard, residents could flee to the tower keep, pulling up a ladder behind them.

The second story entrance made the tower impregnable. The tower is open for visitors and the view from the top reveals rolling hills and the spread of the town below. Mullioned windows and half-timbered walls along galleries and in the palace portion indicate Wartburg was more than a fortress, however.

Named a UNESCO World Heritage Center, the castle has a rich history. When the knights returned from the Crusades, one of the customs they brought back from the Arabs was the art of bathing regularly. Wartburg has a beautiful Knight’s Bath, complete with wall mural, carved columns, and abundant natural lighting.

In 1211, Elizabeth of Hungary was sent as a four-year-old to marry and cement a political union. Now, eighteenth-century mosaics fill the walls of the Elizabeth Chamber, commemorating her adult life of service to the poor.

From May 1521 to March 1522, Martin Luther was sheltered from religious authorities here when he refused to recant his beliefs.  Luther translated the Bible into German.

Legend has it, he saw the devil in his study and threw an inkwell at him, creating an enormous inkblot on the wall. Over the years, so many souvenir hounds chipped pieces of plaster off, the curators gave up “re-inking” the wall. The guided tours of the castle interior are excellent. For walkers, hiking trails spoke out through the area.

The Hills Are Alive…With the Sound of Hikers

Germans love to walk the hills, preferably with a destination in mind. If no café or castle ruins exists as a goal, Germans create something. Above the village of Kleinschmalkalden, the Thuringia state flag flies high, beckoning hikers to traipse through the woods and up the steep hill to a concrete “ruin,” built in 1905, to resemble a beer glass with a handle.

Unfortunately, you have to tote your own liquid refreshment to that one. At the other end of the valley is the Hasenhaeuschen, the Little Rabbit Hut, a gazebo built on a rocky outcropping overlooking the picturesque town, which stretches below, a brook of red tile roofs following the contours of the valley.

Of course, the ideal target for a thirsty hiker is a place where you can choose apple juice or a local beer to wash down ice cream or a slice of kuchen.

One spot that qualifies is the Inselsberg. At 917 meters (3009 feet), the crest affords a panoramic view that includes castle ruins and towns, as well as the distant memorial tower of World War II’s Buchenwald Concentration Camp. The reward at the top of the climb is a fully-equipped restaurant.

The aroma of roasting wurst and potatoes wafts down the hillside, providing the proper incentive for the climb. Upon arrival, the friendly proprietors entice with ice cream and tortes, as well.

We watched people of all ages moving up the steps to the summit, some of them having walked from the base, others taking the last few hundred yards from a convenient parking lot. One car, in particular, caught our attention. A biker emerged, lifted a trail bike off his rack, strapped on his helmet, and mounted.

We watched in horror as he zoomed down the road and suddenly veered off into the woods. Certain he had crashed, we rushed to where he disappeared, only to see a narrow bike trail leading down the mountain.

The rider was already out of sight. Many such biking and hiking trails through level woods and downhills are available for exploring. Pick any town and you’ll find plenty of trails to hike, bike, or just plain meander.

The Inselsberg is the highest point along the Rennsteig, a 14th-century trade route and boundary line groomed as a 169 km (110 mile) hiking trail. The trail is wide and in many stretches carpeted in fragrant pine needles.

The Rennsteig begins just west of Eisenach, at the Werra River, and undulates along the medieval boundary between Franconia and Thuringia, ending at Blankenstein, by the Saale River.

It’s customary for hikers to pocket a pebble from one river, walk the Rennsteig and deposit the pebble in the river at the opposite trailhead. Apparently, enough hikers choose both directions to ensure the balance of pebbles on either end. Along the way, the Rennsteig passes close enough to several areas worth a detour.

Oberhof and The Bunker

Though we walked only a short stretch of the Rennsteig, we met it numerous times as it wound its way along, sometimes running parallel to a picturesque forest road, sometimes dipping away and down into the pine forests.

A popular spot to get off the trail and linger awhile is Oberhof, the area devoted to skiers, winter, and summer.

Olympic ski jumpers train year-round, floating down to grass mats laid out along the giant jumps and landing areas in the summer.

Even the biggest hotel in the town is built to look like twin ski jumps. Oberhof is also what the Germans called a Kurort, a cure area. That means springs, mineral waters and baths, spas and pampering.

Tucked in the woods near Oberhof, about 300 yards off the Rennsteig, sits an inviting little hotel with several small bungalows to rent.

The Waldhotel “Rennsteighoehe” is open to summer and winter visitors both. A couple of hundred yards up the hill in a small clearing in the woods, once fenced for security, sits a long narrow building.

Before reunification, locals were told the installation was a water treatment plant. But walk around the end of the “plant” and you’ll find an iron door leading into the hillside—an underground bunker.

During the Cold War, this extensive bunker was home to a sophisticated listening station. Complete with several radio rooms and fully equipped for housing a dozen or so workers for extensive periods of time, the bunker received and transmitted messages under the noses of vacationing hikers and skiers who suspected nothing.

Now, a guide in the old German Democratic Republic uniform leads the curious through the labyrinthine bunker built by the Stasi, the equivalent of the American CIA.

In every town sits at least one church, any of them worth visiting, if for nothing else than a quick look. Because this area has been at the center of wars, trading excursions, musical flowering, and religious controversy for centuries, the interests of any visitor are certain to be satisfied.

Every major town in Thuringia is filled with original half-timbered buildings. One in Schmalkalden still contains an apoteke (pharmacy) founded in the 1600s. The town also boasts a castle with stunning wall murals and vistas from every window.

While the cities have, as expected, large churches, sometimes small towns harbor the most charming. Moehra, the ancestral home of Martin Luther, honors Luther with a statue outside the town church.

Enter the church and discover an ordinary barrel ceiling painted to resemble a soaring interior, complete with trompe l’oeil windows and domes separated by religious symbols. Music is a staple of these churches—this is, after all, Bach Country.

The organs are grand, stately, and embellished with cherubs, brightly colored arabesques, and gold-trimmed curlicues. If travelers can’t find a concert in one locale, they can ride down the valley or over the hill to the next town.

Classical or contemporary, the concerts will please anyone’s tastes. Even bereft of music, these small churches, most of them anywhere from 300 to 600 years old, are charmers.

While in the Thuringer Forest, take time to seek out and celebrate one of the many festivals. Search out an organ or choral concert. Visit the memorial built at Buchenwald to those who suffered and died. Follow in Martin Luther’s footsteps. Or Bach’s.

The area is flooded with indoor and outdoor activities to suit any tastes. The sights and the friendly people make Thuringer one of the best areas in Germany to visit. Enjoy the trip and, as the Germans would say, “Wilkommen!”

Love Germany? Get our Germany Plane Reader with dozens of travel articles about Germany to go! Kindle, Nook or Ipad, only $2.99. 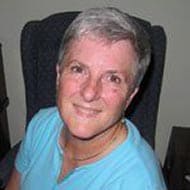 Mary Ann Noe is a freelance writer from Waukesha, Wisconsin. She publishes poetry, short stories and creative nonfiction, in addition to traipsing to out-of-the-way spots to bike, hike, and pester the natives as to where to find good food and drink. She wrote about state’s Drumlin Trail in her last story for GoNOMAD.