An Excerpt from Teachings from the Tap

Chris first learned about the Bergkirchweih in our local newspaper a few years before. A surprising source for such information, the story piqued his interest as something different to do in Germany besides the expected Oktoberfest.

The Bergkirchweih starts on the Thursday before Pentecostin Erlangen, a town northeast of Nurnberg. Over one million people—approximately 10 times the town’s population—attend over twelve days, making it Germany’s second largest beer festival. Most beer geeks dream about a trip to Oktoberfest, but how many know about “the Berg?” After reading that article, Chris vowed to one day attend.

The Bergkirchweih, which roughly translates to “Church Festival on the Hill,” is located at the north end of town on a street alongside a hill. It includes a fair, complete with carnival rides, game booths, and food stalls.

At the other end of the festival grounds is a series of roofed beer halls positioned on steep slopes. Permanent beer kellers nestle themselves into the hillside below. A keller (cellar) refers to the cool storage place where beer is lagered.

We first visited the Bergkirchweih the year before during the last weekend of the celebration. The festival immediately struck me as a huge block party for locals and residents of the neighboring towns.

Families picnicked under the trees while small children swung like monkeys on the railing of a nearby set of stairs. I thoroughly enjoyed it. Without noticeable tourists, it seemed like a beer festival Germans would enjoy.

That first visit moved me to declare the Berg superior to Oktoberfest. Chris scoffed at my assessment as blasphemous because he considers Oktoberfest to be the penultimate beer event. For the Year in Beer, we attempted the Berg on the opening weekend. We wondered how the difference in timing might change the experience.

Finishing our sausages and beer at Kitzmann, we pointed ourselves in the general path of the festival. As we continued through the city center, the chaotic mix of people gave way to a steady stream of individuals all heading in the same direction. We arrived at the festival in the early evening, surveying the activity and reminiscing about our first trip to the Berg.

Not quite ready to jump into the fray, we sat at an empty table away from the party. The music in the distance was quiet enough to allow conversation without yelling yet loud enough to create a festive mood. A family soon joined us. They unpacked their picnic of cocktail weenies and bread. A short time later, steins of beer arrived. The style of beer served at the Berg is a festbier, golden in color with a malty taste. Similar to an Oktoberfest beer, local breweries make it once a year for the festival.

The family of six people overtook our intimate party of two and our table soon became their table. I started to feel like a guest at someone else’s family gathering. Our inability to speak German combined with the family’s limited English compounded the awkwardness. But the slight unease was a small consequence of choosing the road less tourist traveled. Immersion provided the best possible opportunity to understand German beer culture.

The mother made a friendly comment or two in my direction. I looked at her with wide eyes, smiled, and shook my head slowly from side to side.

She understood my body language for “I don’t speak German.” She smiled back and Chris initiated a group prost (toast). Prosting works wonders when language differences prevent further conversation. 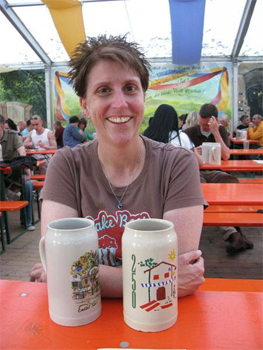 Beer: the goodwill ambassador to the world

I sat across from a fourteen year-old girl who drank a radler (a mix of beer and lemon-lime soda). Under the legal drinking age, her parents allowed her a modified version of beer. She understood some English and did her best to speak to us. Amongst the small talk, we learned that they came from Bayreuth—a town north of Erlangen—and that we shared a fondness for The Simpsons. Bart’s exclamations produced the biggest laughs. “Don’t have a cow, man” in a thick German accent is highly amusing.

Chris innocently asked if the girl’s boyfriend was her brother. She giggled as she translated the misunderstanding to her family. They snickered and the boyfriend smiled politely. Although still an uncomfortable moment, it was a far less creepy blunder than mistaking a brother for a boyfriend. The encounter with this family broke the ice and we soon felt ready to join the flowing river of people passing by our table.

We ordered another beer at a nearby keller and wandered through the swarm of people. At the Berg, in addition to table service, you can purchase beer take-away style. The cost of walking around with your beer is a 5 Euro pfand (deposit) on the stein.

When finished, you return the stein for your deposit or keep it as an inexpensive souvenir. We liked this system much better than Oktoberfest, where you have to be seated to order a beer and walking around the festival grounds with your beer is prohibited. Plus, at Oktoberfest bags are constantly searched for stolen steins, which is about as user-friendly as an airport security checkpoint.

The perfect weather during the Berg’s opening weekend brought people out in droves. The festival buzzed with happy families and spirited young people. The steady clanking of steins rang in our ears as we walked from one end of the festival to the other.

Each tent had its own band, so renditions of “Sweet Home Alabama” faded into a Four Non Blondes song. The crowd belted out the chorus with the singer: “And I said hey, ey, ey, ey, hey, ey, yeah.

And I said hey, what’s goin’ on.” Chris thought that the European Football Championship caused at least part of the upbeat mood because the Germans had high hopes for their national team. 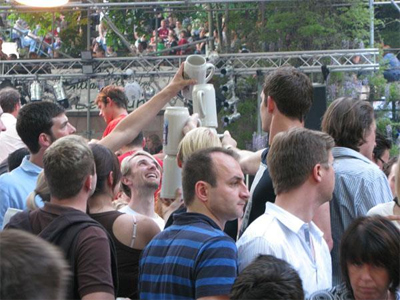 If it wasn’t soccer hopes, however, it could possibly have been the answer to our curiosity about the difference between attending the first weekend and last weekend of the festival.

It’s easy to idealize the Berg as the complete opposite of Oktoberfest. That it’s devoid of all the negative aspects of its big brother. In reality, however, it’s still a large beer fest with a manageable family-friendly crowd during the day and a mass of drunken young people after dark.
Within a few hours of our arrival, the festival shifted into the nighttime mode, signaling our time to leave. However, before we left for the night, I engaged in the unique German tradition of drinking liters of beer and going on fast, whirling carnival rides.

The ingestion of a large quantity of beer made it easy to overcome a fear of puking (due to the aforementioned consumption) on the ride and go for it. Chris thought it was a crazy idea, but his cautions were also easy to ignore.
I managed to keep my bodily fluids inside while spinning on the swinging centrifuge ride, but unfortunately, others did not. A few small wet drops landed on my cheek. Someone spitting?

Rain? I could only hope. The ride came to a stop and I looked to my right. My hopes were dashed. If only I hadn’t looked.

Before our 30-minute walk back to the hotel, we decided that a bathroom break would be a good idea. Earlier in the evening, the lines were short and uncomplicated.

That all changed with the onset of the nighttime crowds. The woman in front of me shifted from one foot to the other and repeated “Mein Gott!” (My God!), while her friend laughed in agreement. By the time we finally reached the bathroom, they weren’t laughing anymore. The forty-five minute wait proved to be a sobering experience for me as well.

By the time I returned to Chris, fatigue was rapidly approaching. I complained about the long line for the bathroom and he told me that he had a short exchange with another festival goer. Seeing Chris’s t-shirt, which listed the year’s schedule on the back, a man asked him about the Year in Beer.

“Some guy saw my shirt,” he said, “and asked if I was traveling to all these places.”

“Cool! Way to spread the word about the Year in Beer,” I replied.

The quiet walk in the fresh air back to our hotel allowed us an extra half-hour to unwind from the festival. Just in time for bed. 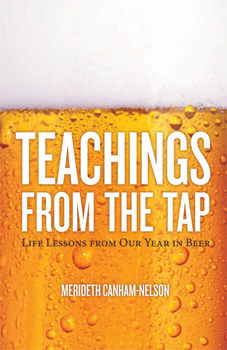 Buy this book on Amazon:
Teachings From the Tap: Life Lessons From Our Year in Beer
Read more articles about beer and travel on GoNOMAD:
The Year in Beer: An Interview with the Beer Geeks
Belgium: The Home of Real Beer
Düsseldorf’s Old-Style Beer Culture: A Copper Gleam by the Rhine
Prague’s Beer Traditions: From Classic Pilsner to Modern Microbrews