Ghana: A Guest at a Rural Funeral

The Drums of Death in Natunya, Ghana

The dehydrated dirt roads, perspiration-glazed vinyl bus seats, and meandering footpaths of the day’s travel had sapped our energy and enhanced our filth. The armloads of yams we carried into the rambling mud-and-zinc village had grown heavy.  Awine, my roommate in the largest city of northern Ghana, introduced me to his thinly populated homeland, Natunya.

His father had passed, but when we arrived at his home, his two moms welcomed us with a deep calabash filled with a murky grey liquid with yellow chunks bobbing around in it. The mush of water, millet, chili powder and shea butter is the proper dish with which to welcome a visitor or returning family member. In return, we offered the pile of log-sized yams, a specialty not grown locally.

Awine had not been home in over a year. We passed around the calabash, taking sips of the piquant brew. I mashed spoonfuls of crunchy millet grains into my mouth under the blissfully eager gaze of Awine’s mom. Her maternal warmth and hospitality made the rustic dish taste greater than the sum of its parts.

The shallow reservoir of muddy water abutted a pitiful stone dam on the outskirts of the village. Awine said the dam, built to provide water for agriculture in the area, was meant to be much bigger.

However, someone had “chopped” most of the money for the scheme, sending it to the crowded boneyard of African development projects. What the village received was a tepid pond next to a pile of rocks. Bored children splashed around in it, while women collected water from holes dug in the vicinity.

Awine said there were crocodiles in the pond. He said they would only appear if we had someone who knows how to call them. On cue, a teenage boy materialized, claiming to be the crocodile whisperer. He turned to the pond, cupped his hands around his mouth and forced a staccato moan from deep within.

Immediately, two eyes and a green forehead breached the surface a few meters away. The crocodile refused to advance, so boys hustled away to fetch a frog. Upon return, they lashed the hopeless frog to a rope of dry, leathery bark.

The boy gave up and thoughtlessly tossed the frog out to the crocodile. A quick splash, and it was all over.

Awine’s biological mother apologized that she had not killed a guinea fowl in our honor the night before. She made up for it by slaughtering one for our lunch of groundnut soup and rice balls. She wished she could kill an animal for us for every meal, but life is hard in the dry season.

Check out the Amazing Casket Culture of Ghana

The Drums of Death

As I forced my eyes open, I noticed the full moon was higher in the sky than I expected. I heard the drums of death pierce the early morning darkness. The clunky rhythms, emanating from the roof of a distant compound, seemed infinite. The drummers had been pounding away relentlessly all night. The sun was yet to emerge, but proof of its impending arrival appeared in the sky’s color, one shade lighter than black.

Performers at the funeral

The end of the night had come too soon. I could hear the first cooking fire crackling above the sinister funeral music. Over the edge of my rooftop perch, I could discern the silhouettes of young girls leaving the compound to fetch water. Next to me, Lise and Awine rolled around in their blankets, also trying to fight off the early wakeup call. The stars had been comforting as we stared up from the adobe roof, but they were fading quickly; a reminder that we needed to be on our way.

Lise gathered her few belongings into her shoulder bag. Before the sun had risen, we were on the trail out of the village. The funeral music seemed to crescendo as we moved. Further on, we saw a dozen men on a rooftop, pounding drums and blowing flutes. Some men lounged idly on the ground, unmoved by the rhythms, as they sat next to a slaughtered goat.

The morbidity of the scene was tempered by the pinkish light cast by the emerging sun. We slinked past silently and quickly, knowing we had little time before Lise had to catch the first transport of the day.

We said goodbye to Lise as she boarded the crowded taxi. She was going to Burkina Faso to meet friends. As we walked back to the village, a dog dashed past us frantically, followed by several men shouting and waving machetes.

“That dog is crazy,” Awine said.

A man trotted by, lagging behind the mob. He told us the dog had bitten another dog and a child.

“They will kill it.”

The man’s funeral was at a typical adobe compound surrounded by parched savannah and scattered plots of gloomy farmland. The dry season was at its bleakest, and the afternoon broil emphasized the austerity. Dozens of people milled about as they socialized outside the compound.

Some swilled pito, the local millet beer, but most were idle. This funeral was a long time coming. Years after the man died, his family had finally scratched together enough money for a proper burial celebration.

Several animals were slaughtered. The body of a calf lay unceremoniously on the ground outside the compound. Each leg was broken and cut open at the knee. The neck was sliced halfway through, and bent to expose the esophagus. The flutists and drummers were already playing on the rooftop.

Awine had insisted that I bring my camera. I didn’t want to. Shooting a funeral, without a greater purpose behind it, seemed highly insensitive. He assured me there would be no problem, and that people would like that I was there taking an interest in their culture. I snapped five pictures before there was, indeed, a problem. The village elders had sent for us. They had some questions.

Five elders sat silently, looking grim, under a four-posted shelter of sticks and bamboo. We were seated, and the discussion began. Awine and his twin brother, Ben, explained our presence. Debate ensued. Voices were raised. Fingers were wagged. Awine called for a boy to fetch a jug of pito.

I nervously hoped this gift would make peace with the elders as I waited for the verdict. I just didn’t want to cause offense anyone or bring shame on Awine’s family. Awine turned to me and explained.

They were upset because they had not been notified in advance about my presence or asked for permission to bring my camera. They said that I could continue to take pictures, under one condition: I take their picture first. They looked to me for my response and I nodded in agreement.

They fought back grins and giggles as they composed their stone-faced, manly facades. I bought them a round of kola nuts to cement my place in their good graces.

Suddenly, a string of 15 ornately dressed “war dancers” barreled out of the compound, screaming war cries and waving huge spears, bows and arrows. Their fugus and cowrie-studded hats with horns gave them a look both fantastic and terrifying.

When they left the compound, Awine asked me to follow him inside. Mud and hay covered courtyard floor. A bloody goat lay in the center. Women wandered around the middle of the compound, some in bras, some topless.

I backed out of the shelter, and when I turned, I found myself face to face with a war dancer. His flaming eyes locked with mine. He was huffing at me and pushing his chest out as he threw intimidating grunts in my direction. He threatened me with a spear in my face. I braced myself for the attack, and then regained my composure, knowing this was the role that accompanies the costume. I unfroze my body and stepped aside avoiding any deep wounds. The dancers remained in unshakable, trance-like states throughout the performance.

Awine took me to the top of the compound, where I confronted the drums of death up close. I knew the drummers had a long night ahead of them, keeping the beat as everyone danced, feasted and fornicated. For in northern Ghana, elaborate funeral celebrations like this result in a bounty of conception as the drums of death beget life. 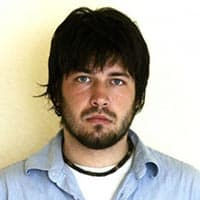 Joey Anchondo is a photographer and writer based in Paris. His work has appeared in USA Today, The Seattle Times, The Arizona Republic and The Washington Post.