It’s the most isolated inhabited place on earth – farther from the next piece of land than any other settled piece of ground on our planet. Nearly six hours by air from mainland Chile, Easter Island – or Rapa Nui as it’s known to locals – also holds some of the greatest mysteries known to humankind.

Rapa Nui is most famous, of course, for the legendary monolithic statues that seem to stand guard around its perimeter, seeming to keep a stoic lookout toward the sea. Many people who could never begin to pick out the island on a map would recognize a photograph of one of these statues, called Moai, instantly.

From the first moment I arrived on the small island, I was craning my neck trying to get my first glimpse of a Moai. I didn’t have far to look—at the entrance to the thatched-roof airport from the landing strip, there one sits, impassively watching the modern-day travelers come and go.

More than 600 Moai sculptures are found around the small island of Rapa Nui, ranging in size from a meter to more than eight meters in height. They document the history descending from Hotu Matua, the first king who initiated a settlement that grew into a thriving, sophisticated culture lasting more than 700 years.

Visiting the many archeological spots that make up the UNESCO World Heritage Site with a knowledgeable tour guide—a must in order to understand in any depth what you are seeing—can take weeks. But in a matter of days, one can see the major sites of importance. The protected Parque Nacional Rapa Nui makes up forty percent of the island’s surface, and exploring it with guides can often bring up more questions than answers. 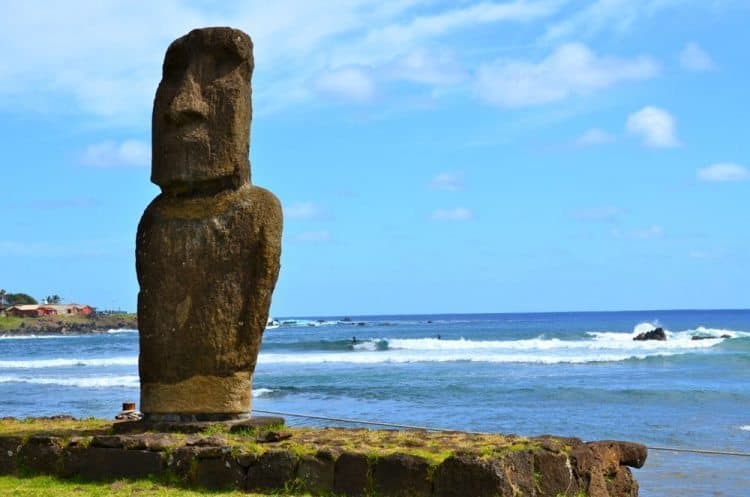 Exactly how the statues got where they are, and most especially their significance, remains largely unknown and controversial. After decades of research and archaeology, scientific investigation and oral history handed down for generations are often at odds. Differing accounts and answers are given, even among tour guides and the Rapa Nui people.

Some of the statues have been carbon-dated at over 3,000 years old, while the most recent ones are from the 18th century. Not only are the construction and meaning of the statues shrouded in mystery, but so are the reasons why so many were toppled and the civilization largely abandoned, quickly.

None of this prepares you to come face to face with a Moai sculpture for the first time, in person. They are seemingly unchanged and unfazed by the history and progressions their island has taken – staring out impassively and all-knowing. The mystery of Rapa Nui only adds to the almost magnetic draw of this place.

Driving with our guide Hugo, from the oldest tour operator on the island, Mahinatur Services (est. 1967), I caught teasing glimpses of statues here and there, through the trees or behind a clustering of rocks.

I had no idea if some of these sporadic statues were authentic ones that might have been moved, or replicas made later on. Some even seemed to be in people’s yards.

Suddenly, we made a turn and headed up a dirt road to an emerald green mountain ahead. After rounding a curve, the van pulled to the side of the road and Hugo opened the door for us to take pictures. And there it was—all along the side of the extinct volcano in front of me, Rano Raraku, was dozens of the dark gray statues.

This is the place where all the Moai found on the island were carved; their birthing place, so to speak. It’s also a Moai graveyard; today, the remains of dozens of sculptures remain strewn around the dormant volcano, some only halfway carved and still attached to the rock of the mountain. Here you will see Ko Te Tokanga, the largest Moai found on Rapa Nui, standing at 22 meters long and weighing about 220 tons.

A short hike along the side of the mountain puts you face to face with the Moai, culminating in a dramatic view from the other side of the mountain out to the Pacific Ocean—and Ahu Tongariki two kilometers away, perhaps the most famous and most photographed platform of a dozen standing statues.

Ahu Tongariki was, in fact, our next stop. The ahu—the name of the stage or altar built for the Moai—supports fifteen sculptures of varying size. These were restored between 1992 and 1995 after a devastating tsunami knocked much of the original structures away, dragging the statues 500 meters inland.

It is largely believed that the Moai statues were carved for religious reasons, and the wealthy families could pay to commission their own personal sculptures—the ultimate status symbol for the time. How the statues were transported to their final spots remains unknown, with educated guesses on everything from logs to rope to work animals.

Several other major ahu platforms are dramatically striking, including Playa Anakena on the western side of the island. These statues are also backdropped by the ocean, but this is an actual beach that is frequented by swimmers and locals.

It is a bit less somber and awe-inspiring, yet at the same time more accessible, to see the Moai in the midst of general local life, with a small handicraft market and surfers and children running around at play. You will also often see the wild horses that roam the island freely here.

Nearby are incredibly interesting caves and petroglyphs that continue to tell the complex, mysterious story of Rapa Nui’s past. One cave is nicknamed the Cannibal Cave, and the question of cannibalism is one of the most hotly-contested questions about the history of the island.

Somewhere in the 18th century, the thriving civilization went into a sudden decline. This also is mysterious, with theories explored from internal warfare and slavery deportations, to the exploitation and eventual using up of the island’s natural resources, or exposure to Western settlers and their disease.

In fact, the name Easter Island was bestowed when the first European settlers landed on Easter Day in 1722.

Back on the opposite end of the island, the ancient village of Orongo allows you a glimpse into the second phase of the Rapa Nui civilization, in the 18th-19th centuries.

Almost equally as mysterious as the Moai came the next chapter, that of the Birdman.

After many centuries, the Moai statue building ceased, and the king began to lose power. Ancestor worship associated with the Moai was giving way, and in this period many of the statues were toppled.

There emerged a changing civilization that venerated a creator god, Makemake.

Here at Orongo, the remains of 53 small cavelike houses remain, overlooking a steep bluff of crashing ocean against the craggy rock.

The annual tradition of the Birdman period was a contest in which the warriors would scale down the cliff, swim on a type of ancient longboard to an island just in the distance, and retrieve the season’s first egg from the nest of the Sooty Tern.

The egg would be placed on a basket attached to the warrior’s head, and he would swim back to present the esteemed gift. The winner of this contest would spend the next year as the venerated Birdman, in isolation at a ritual house.

It’s easy to spend your days marveling over the national park and archeological sites—truly unique in the world, there is simply no other place like it. But Rapa Nui offers a few other attractions should you wish to intersperse your historic sightseeing. There is really only one town, Rano Raraku, Hanga Roa, of about five thousand residents.

It is small but interesting to stroll around. There are a number of nice little shops, restaurants, and bars, particularly along the main street and the beachside. An artisan market and two museums are highly worthwhile.

Don’t forget to stop by the post office for a must-have Easter Island memento: for a suggested tip, the postmaster will stamp your passport with the official Easter Island stamp.

A recommended place to stay in only a kilometer from Hanga Roa and the airport, Hangaroa Eco Village and Spa. 75 rooms and suites are carefully decorated in island style, using natural materials and local handicrafts as much as possible.

This is privacy and comfort combined with a bit of luxury. A spa provides some unique, relaxing treatments, and a highlight of a stay here is the dining experience.

LAN Airlines operates daily flights from Santiago to Easter Island (except Tuesday), with twice-weekly flights that continue on to Tahiti. They are also generally the best bet for flying into Chile from North America, Central America, and South America.