When I first saw Marina del Rey, California, all I could think of was, “I wonder exactly how many boats there are here?” That’s because when you look at the harbor of this city of about 8,000 people, all you see are the bobbing boats and masts that go on for what seems like miles. There are about 5500 boats docked here, we later learned.

Take a ride on the bicycle path that winds its way from Admiralty and all you want to do is get out on one of those beautiful boats. But how?

Acting RichWe got that chance in early March when we discovered the UCLA Marina Aquatic Center, where even paupers can afford to rent a sailboat or a kayak and get lessons on how to sail in the pristine harbor of Marina del Rey. We may not be rich like most of the people who call Marina home but we felt like millionaires as we prepared to set sail.

We met up with our teacher, Cesar Jara. He’s been teaching sailing here for decades, and has the steady hand you’d want your ship’s captain to have.

The Catalina 14 is a sturdy, reliable sailing vessel, a few steps up from a Sunfish. It’s got a mainsail and a jib, the smaller sail up front. UCLA has a fleet of 12 Catalinas, and 12 smaller Laser sailboats. The process of learning how to sail at the center starts with the basics. Put on your lifejacket. Make sure it’s buckled and not just loose around your waist. And don’t take if off until you’re back on land.

Cesar is a patient teacher who has seen it all, from a yacht t-boning a delicate 8-person skull to capsized boats on busy Saturdays in the harbor.The first thing Cesar showed us was how to rig up the 14′ Catalina sailboat, a simple craft with a jib and a mainsail but no other frills.

The Marina del Rey Bay is where we sailed. It is bordered by rip rocks, and the channel is marked clearly where only powerboats can go. It was a Tuesday, so there were not many other watercraft to distract us two novice sailors.

Despite the calm winds, a LA Lifeguard boat was soon speeding toward a sailboat in distress with sirens wailing. Later we saw the boat being towed into shore with an apparently damaged sail and non-working outboard auxiliary motor. Two embarrassed looking wanna-be sailors stared meekly at us as they passed by.

Cesar patiently taught us the terminology, from the simple starboard and port, (right and left) to the more complicated aspects of who has the right of way as you sail toward another boat (it depends on who is directly in front of the wind).  Leeward is the direction downwind, and windward in the direction upwind. Luffing means your sails need to be tighter.

We asked him about how many of these sturdy boats have tipped over, and he said that because of the bulb at the top of the mast, they can’t “turtle” but they can and will go over on their sides, requiring standing on the centerboard and pulling on a line to right the mast.

Sluicing through the Water

But happily, today’s sail was in calm winds and gave us that delirious feeling that the sound of slicing through water under sail power gives. We took turns at the tiller and watching the little green and red cords up on the sail that showed if were were angled in the right way to catch all of the breeze and keep the sails from luffing.

It was a great way to see this beautiful city and if you want to take a lesson the center is open to the public. The UCLA Marina Aquatic Center is located at 1401 Fiji Way, has sit-on-top kayaks, small sailboats, paddleboards to rent Regulars enjoy the big screen TVs at Tony P’s on the water

and offers lessons for all of the boats too.

You can also take a short quiz on line if you’ve had sailing lessons before, and just go the first day’s classe and show that you can handle the vessel on your own.

Marina del Rey has another place where you can rent watercraft and enjoy its proximity to the sea. The Phins Water Sports Club run by Chris Feeney, is where you can find a rowboat, a paddleboard or a kayak to take your own little tour among the thousands of boats in Marina’s vast harbor.

Make the ocean your health club is the motto here, and their fleet includes Whitehall Spirit 14-foot sliding-seat rowboats, as well as two-person models so you can work out by rowing. They have single and two-person kayaks (which some people jokingly refer to as divorce boats). Chris offers lessons in Stand Up Paddleboard yoga, and you can learn rowing techniques too. Whatever you want to do in the water, he’s got you covered.

Feeney, 35, told us that Marina del Rey is one of the friendliest places he’s ever lived. “I made more friends here in the first two weeks than I did the whole time I was living in Portland!” 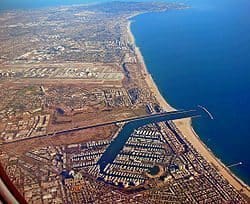 An aerial view of Marina del Rey, south of Los Angeles and close to LAX.

It’s a decidedly health-conscious community, he said, where there are more yoga teachers and health food nuts per square mile than anywhere.

As for his clientele, Feeney said that some days all of the watercraft are rented out, and it’s consistently like this–90 percent of the women want paddleboards and nearly all of the men want kayaks. Why is that? more yoga and pilates instructors per capita than anywhere in the state. In fact that’s his wife’s job–she teaches yoga!

Feeney also told us about how many times boat owners get sick and tired of being boat owners. “I have been offered boats so many times, big boats, people just get sick of paying for the upkeep and paying for the slips, which can run to thousands of dollars a month. They just say “here you take it!. You know what BOAT stands for right? ‘Break Off Another Thousand!”

Paddling the HarborWe set off on kayaks to weave in and out of the rows and rows of pretty yachts in the shimmering harbor, and it was one of those afternoons you just can’t forget. Especially since were returning to our dreadfully cold home state of Massachusetts the very next day.

Boats at the dock. More than 5300 boats call Marina del Rey their home. After our day on the water we grew hungry–and there are plenty of great places in Marina del Rey to get gargantuan portion lunches.

Our choice was Tony P’s Dockside Grill, at 4445 Admiralty Way. This place is huge, with an equally huge sports bar next to the patio with lots of waterside view seats.

We tucked into avocado turkey burgers and some of their taco salads as our hosts told us the fascinating history of how Marina del Rey came into being.

In 1940, multi-millionaire recluse Howard Hughes moved his Hughes Tool Company to the Ballona wetlands nearby, and there he built the famous Spruce Goose wooden boat/plane that had only one flight during its short life. He’s certainly in good company in Marina del Rey, where millionaires gather all year long and the sun rarely doesn’t shine down on their rarified domain.

It was only 50 years ago that this unincorporated seaside community became a town. The area where Marina del Rey is now was once a swamp that was a popular duck-hunting area, but in the late ’50s, Los Angeles determined that they wanted to create a safe harbor for yachts.

Built by the Army Corps of Engineers, over many years and with federal and state funds, they began digging. After a terrible winter storm damaged the worksite a few years before, on April 10, 1965, the largest man-made marina in the US was finally officially opened. Today Marina Del Rey is proud to have nearby offices of some of the world’s most successful tech companies like YouTube, Facebook, Belkin and ad agency powerhouse Chiat Day. Colorful and unforgettable Venice Beach is just blocks away.

We enjoyed our stay right on the harbor at the Jamaica Bay Inn. This hotel, like most of the hotels in MDR, gets full fast during the tourist heavy months of June, July and August. Staff told me that many of the visitors come from Europe. Travelers who have rated Marina Del Rey hotels on TripAdvisor give the highest ratings in the city to the Jamaica Bay Inn, and they deserve the kudos. Located right on the harbor with gorgeous views, the staff was friendly, helpful, and they even have bikes we borrowed that you can use to tool around the city. Rooms are around $249 during the off peak season, and are very hard to get during the summer months.