I met a Jeep full of school children, their eyes shining with awe. They were waving their cell phones to me mouthing, “we saw the tiger, we saw the tiger”. Our naturalist Ramesh Rana from Taj Safaris managed to show us its vanishing tail. Even that was a sighting for me. 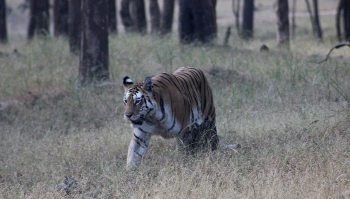 My tiger story started in earnest in 2009 with a visit to Kanha National Park in Madhya Pradesh, India. In between I visited Jim Corbett, Bandhavgarh and Panna National Parks but the tiger remained as elusive as ever.

So, when I landed at the Nagpur Airport in the morning, I had no idea what to expect from the jungle. I was heading to Baghvan a luxury lodge by Taj Safaris.Taj in one of the finest names in Indian hospitality and they have teamed up with &Beyond from Africa to deliver an incredible safari experience. Even though I had no clue what the jungle had in store with me, I was sure that the lodge would be beautiful as I was thoroughly spoiled at their Banjar Tola Lodge at Kanha.

The road leading to the Pench National Park was a torture. It was full of pot holes for most of the way. However, when my full time job, part time writing assignments and a family with an energetic daughter were combined with an early morning flight, I fell asleep in the car even on that road! You can imagine how tired I was. On arrival I was greeted with the double hand waving, typical of Taj Safaris. It was good to be back with them.

At the lodge I had an entire cottage to myself complete with a machan (observation deck). I was given a briefing of my room and then asked to come back and join them for breakfast. The machan along with the outdoor shower was my favorite features of the cottage. After the breakfast, I was chatting with the other guests at the lodge. Two of them had seen a tiger on the morning safari. I had two evening and one morning safaris at Pench. Would my luck change?

As a traveler my first preference is trekking. I got introduced to wildlife later in my life. But its hold has been growing steadily on me. I live in a big city; I commute long distances daily for my work and face the chaos that is India on a regular basis.

And yet when you get out of the big cities there are places that can take your breath away. After all, here I was at Pench, staying in a cottage surrounded by trees, and looking forward to driving through the jungle till the sun decided to set!

In my various trips to National Parks in India I have met people who are completely fixated with sighting a tiger. Within this we have the rational category and the irrational category.

The former is just interested in sighting tigers but is aware of the jungle. The latter thinks that the tiger is a pet of the naturalist and the driver and it is because of a personal vendetta they are not showing it to them! After a while the second category starts to get on my nerves.

After lunch, it was time to head out for my first safari at Pench. It is a beautiful forest and I will say this for each of the forests I have visited.

The evening brought the usual suspects, plenty of deer, birds, wild boars, jackal and the like. After three hours we headed back to the lodge. It was business as usual for me, we didn’t see a tiger.

The food at Taj is wholesome and awesome. As we were far away from civilization some fancy stuff may be missing but they put on a wonderful fare that can be expected inside a jungle.

I had an early night in anticipation of my morning safari. The wakeup call for it was at the obscene hour of 5.00 am.

As we went for the ride we saw a school group was also in the park. These were good kids, not noisy or loud. And later it was one of their jeeps that waved cell phones at us, with lovely pictures of the same tigress of which I just saw the vanishing tail!

Our naturalists Ramesh Rana and Motiram ji had other ideas.

It looks like tigers are creatures of habit and the naturalists had a good idea from where the tigress might cross again. So we headed a short distance and waited in silence.

After a while she came out and casually without giving us a single glance she walked past us. I had seen a tiger for the first time in my life. I was thrilled but I was also aware that I wanted a video of it on my cell phone. I could contain my excitement and actually capture her on a video.

All of us in the jeep (I had three really nice jeep mates from Mumbai) were excited beyond words. However, our naturalists knew of one more place from where the tigress may cross again. We waited once again and after ten minutes or so, there she was.

This time I went in for taking stills! After vanishing in the forest, the tigress decided to swim through the water body to go on the other side of the jungle. I even managed to get a record keeping shot of the tigress in the water. This was my lucky day after all.

We had a jungle breakfast in the designated area within the forest. I guess anyone who saw us could make out from our excitement that we have seen the tiger.

My jinx was finally broken! In the evening safari I caught a glimpse of a male tiger. It was not enough to get a decent picture but still.

After this excellent trip my six year old daughter and I went to Sariska National Park. As she is small we did only evening safaris. And guess what? I am back to square one, no tigers for me again! Whereas when my husband was there on a solo trip he saw a tiger in a single safari!