Hitchhiking Through a War Zone in Kurdistan

Skinny Dipping in the Tigris River at the base of an 11,000-year-old cave citadel.

Mesopotamia. Birthplace of agriculture – ancestral mother of all civilization. The river’s current of the fall equinox full moon slips through ancient dreams on the banks of history. Sleep.

Tea. My Italian and I laugh when our first ride casually slips a gun from one pocket to the other and tries to buy us tea.

It reminds us of our ride a few days before who we had tried to convince to pose for a photo with the two machine guns casually pointed at the Italian’s head, but instead, he bought us breakfast and tea.

He won, and together we zigzagged a wild 2,000 mile Middle Eastern odyssey on our thumbs and drank easily a hundred cups of tea- all the way down to Southeast Anatolia. The disputed land of Kurdistan.

Tea. We take a break from hitchhiking to climb the roof of a 2,000-year-old Armenian monastery.

Behind the church row upon row upon row of white canvass tents- a fortified Syrian refugee camp where no one gets in or out – and the nasty feeling I’ve been feeling for days jumps back into my throat. I’m disgusted by myself – drawn here to this fucked up corner of the world – what am I?

A conflict tourist, watching misery like it’s a zoo animal? I’m ashamed – what am I doing here? Is there some dark part of me that just wants to experience something scary, something dark, do I want to experience conflict??

Careful what you wish for…

Stuck on the Syrian border, the panic that first struck a few days ago in Mardin starts to come back- days of guns, sneaking through military checkpoints with illegal Syrian refugees, U.S. state department evacuation and rumors of helicopters being shot down have frayed my nerves – the region’s stability is crumbling around us. I want to go home. When a minibus stops, we decide to take it.

We get frustrated haggling over the price- we want to pay the full fare like everyone else but they will only accept half price from us.

Off the Syrian border and onto the Iraqi. Careful what you wish for. Nervously holding our thumbs out as military helicopters circle around our heads and gunshots ring out from the Iraqi hills behind us.

A white van pulls over, and the passenger starts yelling at us – the very first non-friendly interaction we’ve had anywhere in the Middle East:

“Where are you from?”

“Italy and Canada,” we lie.

“Let me see your passports.”

“No- ” he demands. The back door of the unmarked van on the Iraqi border slides open and my heart drops straight to the ground – three plain-clothed men with AK-47’s. Stepping out with a pistol and dark sunglasses. “Give me your passports.” Fingers trembling. “Get in the van.” F**k.

They turned out to be Turkish anti-Kurd police – their credentials being a business card that just said ‘police’. The captain — the loud screaming English speaker– forces me to sit next to him in the passenger seat, slapping my chest a little too hard to be friendly, spitting in my face as he squeezed my neck painfully and explained how upset he would be with me if I turned out to be a spy. He had insane eyes. Driving into the desert.

He let us go, even tried to buy us tea and pulled over a van, and explained that the driver had “volunteered” to take us. But the experience shook me pretty deep. No part of it felt anything like the thrill of doing something dangerous on a train or reckless adventure. It just made me feel stupid.

When that van door opened and I saw those guns… I experienced a crushing wave of helplessness and vulnerability.

I’ve never felt anything like that before – and if that’s what I was coming here to experience then I’m the worst kind of fool. Maybe I deserve to get chased by that feeling for a while.

Tea. The road from Sirnak to Siirt has to be the most one of the most breathtaking rides in the world. Riding in the front seat of a truck with an amazingly gentle and kind PKK militant – the armed Kurdish group smearing the line between partisan freedom fighter and terrorist (depending on who you ask).

And in these dramatic peaks – these mind-blowing mountains – it is not hard to see where fierce independence and pride comes from. We sing along to partisan Kurdish songs by fallen martyrs and drive-by Turkish tanks sweeping the hills for rebels. We stop to wash and pray one of the 5 daily prayers of Islam and he bought us nuts and soda.

Tea, kebab, Tea, grapes, Tea, Tea. I don’t want anyone the think that my time in Turkey was all guns, chaos, and drama. The truth is Tea that the defining aspect of this entire trip was outrageous kindness everywhere we turned.

Hardly a ride went by that didn’t offer us tea- we hardly paid for a meal- we hardly had to wait for a ride. Turkish hospitality- like a busy barber in Istanbul who gave me two cups of tea, a free shave, and closed his entire shop to walk me half an hour to where I was going just because I stopped to ask directions – deserves every bit of its reputation.

But sometimes too much Tea and hospitality can be overwhelming… After the ride with the PKK fighter, we took a short bus ride to what turned out to be a major religious pilgrimage town.

An old man on the bus who spoke great English Tea took us to a sacred tomb where we prayed together. Afterward he bought us Tea and Dinner, Tea, pretty soon all sorts of Tea people were crowding around force-feeding us.

He won’t hear of it- he tries to find us a safe camping spot before he has to go catch his own Tea bus Tea we can’t Tea explain to him that we know what we’re doing. The Tea people want us to sleep in their Tea shop Tea We just want to run away somewhere Tea He wants Tea to help us Tea set up our tent Tea we’re so tired Tea.

Finally, a guy walks up and explains in Turkish that he has a house with nobody in it that we are free to stay in Tea, this is acceptable to Tea our old man, and he Tea hands us off to the Tea beard guy.

I don’t Tea know why Tea it was not safe to sneak off to some secret place but its safe to stay with the first random stranger we find, Tea, but we’re just happy to Tea be allowed to sleep.

We walk through a dark jumbly alleyway maze to the guy’s house – a bombed-out, dusty hot spider-infested cement house with all the windows broken out.

Our new host leaves and we feel a little despair. We don’t want to sleep here. Our host pops back through the broken window and gives us a pillow.

Turkey and the disputed lands of Kurdistan are amazing places, steeped in natural beauty and history (we accidentally hitchhiked right past both the Garden of Eden and the oldest temple in the world). 97% of our time there was incredible.

I have a strong new respect for Islam and I found some of the kindest, most generous people I’ve ever met. But there were some difficult days.

The day I just recounted was followed by an equally tense day when the truck we were in broke down right on the Iranian border at the cold foot of Mount Ararat (where Noah’s ark landed) in the middle of the night.

Our amazing driver who drove military trucks in Iraq and Afghanistan being visibly quite nervous explaining that these hills are dangerous.

It was a  suspensefully long McGiver job… another story for another time… but I think by the time we got out of Kurdistan, and then out of Turkey all-together, both of us were feeling completely worn out and a little bit crazy.

I also want to give a big thanks to my Italian, who I had initially written him off as someone I was taking under my wing- but he quickly became the backbone of our operation and I don’t know what I would have done without him. 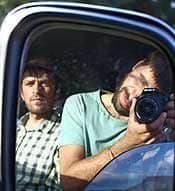 Walker Stephens left home on the west coast of North America with $200 and one big dream of circumnavigating the planet without flying. So far he has worn out 4 pairs of shoes over 200,000 miles. He’s taken a dozen freight trains, five buses, one big boat plus several smaller ones.  Read his blog.