United States: Crossing on a Skateboard

Across A Big Country by Skateboard

In mid-May 2015, Brian Zygmontowicz will leave Lansing, Michigan with a backpack, a day’s worth of food and water and a skateboard. That’s it. But he’s not going out for a few hours to visit a friend. The thirty year old, originally from Michigan, will be making the 600-mile journey from Lansing to Baltimore, Maryland – by skateboard.
Zygmontowicz anticipates that the journey will take him around two weeks, covering between 30 and 70 miles a day. He’s allotted 22 days in case of delays or situations in which he gets derailed. But he’s planning to complete it in the two weeks.
“I see it as a chance to relax and go on a little vacation,” he said.

This isn’t the first time Zygmontowicz has done this. In 2013 and 2014, he spent nine months “pushing,” or skateboarding, from Maine to Key West. That journey was less organized, and he made a lot of stops that dragged out the trip.
“It was pretty intense,” he said. “But also a great time.”
One of the highlights of that first pushing trip was taking a ferry from New York to New Jersey and seeing the Statue of Liberty along the way. “That was pretty sweet.”
He also went diving in a cave in Williston, Florida called Devil’s Den. Often he visited places he didn’t plan to see, just because he stumbled upon them and they sounded cool.
“I stop when I see cool stuff. Things like the world’s greatest walnut. You can’t pass that. This is the reason you travel. You can see cool stuff you might drive by every day. Those are the kinds of things you see on foot.” 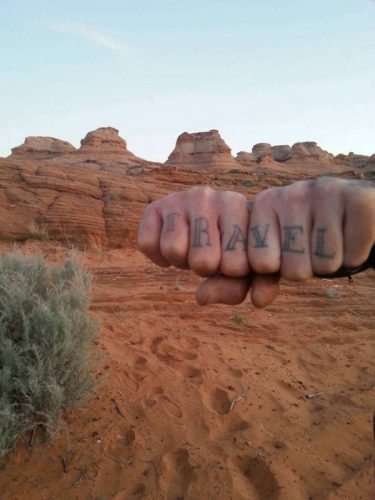 Brian Zygmontowicz, or “Ziggy”, shows off his tattoo. Zygmontowicz has spent a big part of the past ten years traveling around the United States on foot. “I’ve stayed in a garage in Portland, Oregon, I’ve hitchhiked a lot, really anything goes,” he said.
After he’d traveled a lot, he thought to himself What’s next?
“I’ll do it on a skateboard.”
Ultra light backpacking
Zygmontowicz said he travels by skateboard because they don’t break down and they’re basically as fast as a bike. If you get a flat tire, it sets you back in money and time to fix it. You also need to find somewhere to lock your bike when you make stops. By contrast, “a skateboard is extremely portable,” he said
His skateboard is a regular board with slightly modified wheels. His backpack will weigh about 22 pounds, eight pounds of which will be a gallon of water each day. “I call this ultra light backpacking with a skateboard involved.” 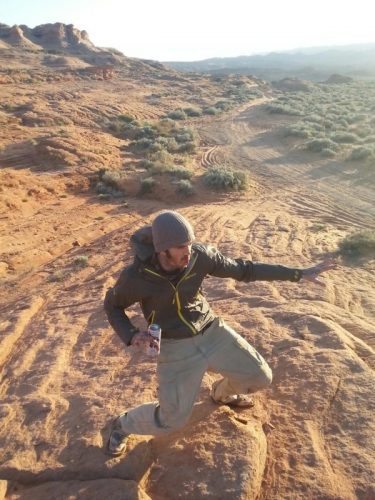 Brian Zygmontowicz He’s not too sure yet where he’ll sleep, though he has a sleeping pad, which was donated to him by Klymit. “I’ll find a place to sleep in the woods or under an overpass for a while. I don’t really know yet.”
A Monotonous Day
As for his daily life, he described it as very monotonous. “It’s just pushing and pushing. I call family and friends and talk to them while I’m pushing, which breaks up the time.”
He charges his phone when he stops for a coffee at a gas station or if he stays with someone overnight. He has a backup phone battery that he charges at those stops as well, and he switches between the batteries as necessary. He’s looking into getting a compact solar powered charger, which would last longer than the system he has now.
One of the issues Zygmontowicz encountered on his last journey is one he’s hoping to avoid this time around. When he got to Florida, an ice storm hit Pensacola. It was 28 degrees and he had no choice but to carry on.
“It takes twice as long to go anywhere in bad weather and it’s miserable but I just kept going.”
Skateboarder, Future Author 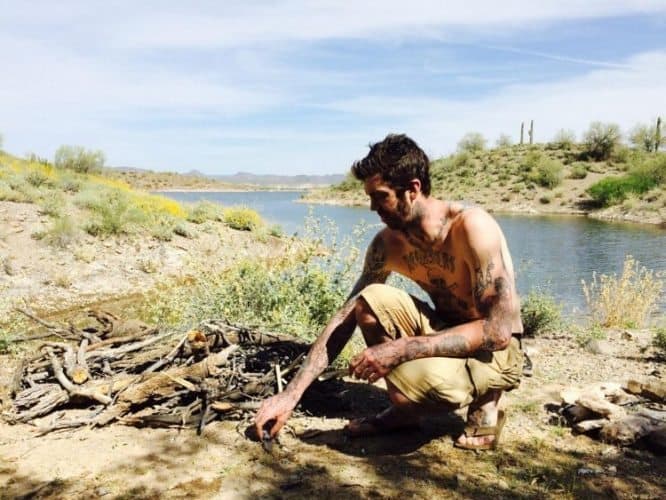 Brian Zygmontowicz Zygmontowicz believes that this kind of travel should be more popular. He said he can count on one hand the number of people who do long-term pushing trips, but he wishes there were more.

He said he’s not doing this to set any kind of records, but rather because he enjoys it. He’s documented his travels in 1300 pages, and he’s writing a book that he hopes to publish in 2016.
He’s attracted some attention for his travels and has gotten some free gear in the process. “Action Board sports provided me with some of the best skate gear on the market and Bern gave me the only helmet I would ever consider placing on my head.”
He said overall the ultimate highlight of his trips is getting to experience people’s culture. He also met his girlfriend on his last trip and they’re still together after almost two years. 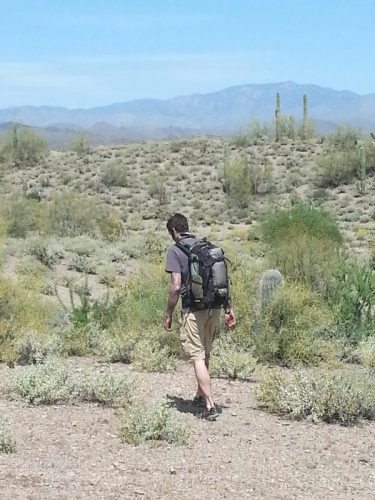 Zygmontowicz on a trip. This upcoming trip, he’s excited to see Pittsburgh and the Ohio countryside. “The Pennsylvania mountains, too,” he said. “The downhills should help with the skateboarding.”
Preparing for a Year
“I’ve been preparing for this for a year but when the day comes, who knows what it will be like. I don’t now exactly where I’ll be staying so I have to make sure I have enough cash to last me two or three weeks.”
‘Enough cash’ means between two and three hundred dollars, which is probably the cost of a weekend at an average hotel. Most of that cost is food. He plotted his route on Google Maps and cross-referenced that with maps from the Department of Transportation.
“I pinpointed all of the Dollar Generals. You can get food there for very cheap,” he said.
When the two weeks are up, Zygmontowicz will find himself back in Baltimore, the city he currently calls home.
And after that, he’s not sure. “I take it every day and see what happens. Who knows?”
Follow Zygmontowicz’s journey, which starts May 18, on Instagram.

Read more stories about travel across the US on GoNOMAD