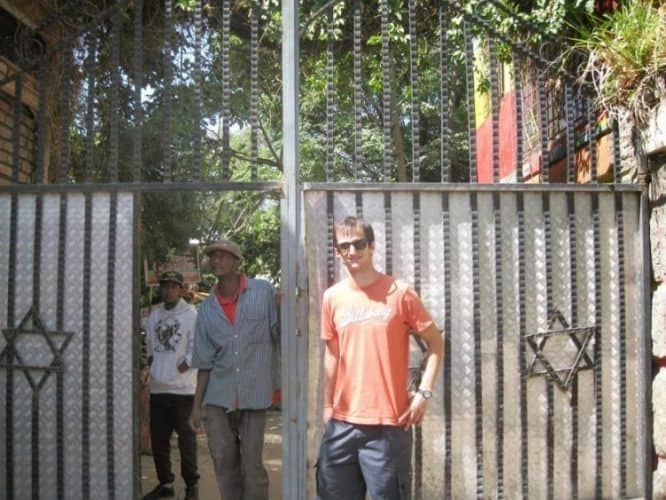 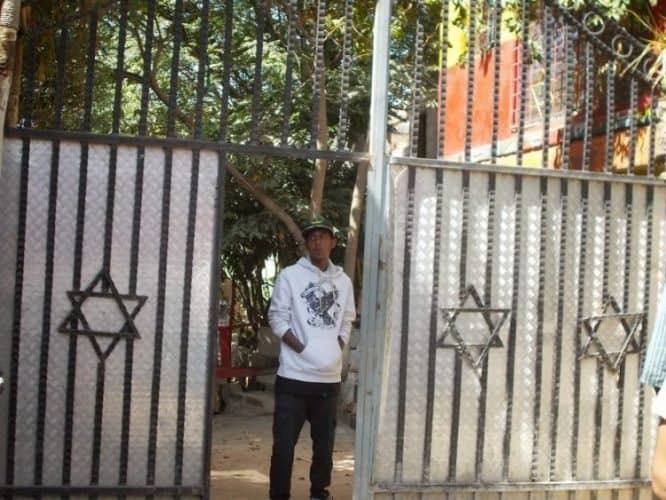 “Show them the banana leaf” the Rastafarian man demands of one of his workers. When the young man brings the wrong kind of leaf, the Rastaman agitatedly grabs one to show us.

“Turn the f—–g music on!” he shouts to another youngster. Raslmumba David exuded a charismatic authority that filled his workers with fear and loyalty. The scene could have been between Fagan and his crew from Charles Dickens’ Oliver Twist book.

But this was all real. We were in a bizarre, but intriguing soon-to-be hostel in the town of Shashamene, a four-hour drive from Ethiopia’s capital city Addis Ababa. This is a place close to the hearts of Rastafarians around the world.

It had been a last-minute decision to visit Shashamene from our beach resort overlooking Lake Langano. We intended to roam around and sample the town’s boisterous and strange atmosphere. According to my guidebook, the area has disproportionately 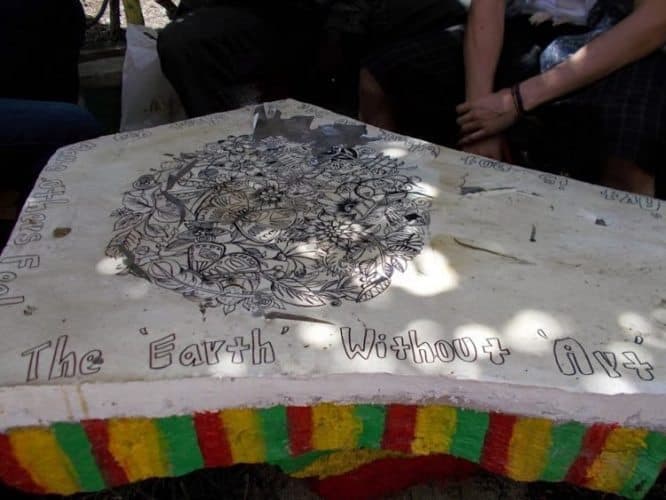 high numbers of crime and con-artists.

It was here that Haile Selassie, Ethiopia’s last Emperor, seen as God incarnate by Rastafarians, granted 500 acres of land to black people from the west who had supported the battle against Benito Mussolini.

It was an invitation to Rastas from around the world to “come home”. In reality, the homecoming never took hold despite an

upsurge in immigration in the 1960s.

Today, the number of Rastas in Shashamene is between 400-700, and immigration has slowed down markedly. Integration has been a problem, partly because of the Ethiopian government’s refusal to grant citizenship and identity cards for repatriates.

But also, the Rasta community, with its own language and religion, wanted to create a distinctive identity.

Upon arrival, we were greeted by locals with a combination of bewildered looks, fascinated stares and a burning desire to elicit as much money from eight Europeans as possible. The atmosphere on the high street was ostensibly jovial.

A mother and her young child came out of their ramshackle home to shake my hand. A couple of young men, testing their English language skills, uttered “hello welcome”, laughing as they spoke.

Others were insistent on selling t-shirts, bags, and khat (a chewable herbal drug considered legal in Ethiopia, but illegal in Britain). An elderly man stopped for what seemed like an eternity, staring and holding his hand out, desperation etched across his face in the hope for spare change.

But we needed to be on our guard with my friend’s bag already being unceremoniously opened by a passer-by. My plan was to look tough. Broaden my shoulders, walk the street in a confident manner and not look like a lost tourist.

A man with short, spiky hair wearing a bright yellow t-shirt and sandy light blue jeans caught our attention with an unusual greeting. “Shalom shalom. My boss is an Israeli. He wants to meet you for a coffee over there,” he says pointing across the street.

With no real plans for the day ahead, we wonder over. On the floor is a young woman delicately preparing coffee. She smiles at us.  To my left are a group of middle-aged men sipping coffee. Seated on one of the plastic white chairs is a tall grey-bearded man with dark sunglasses.

His name is Raslmumba David. Wearing a green combat jacket emblazoned with a number of Rastafarian badges, he says: “When I saw you arrive I told my man ‘these are my people. Bring them over to me.”.

By ‘his people’ he meant Israeli. Only one of our group was born in Israel but many of us were Jewish. Maybe he had a knack for spotting his brethren.

But it was most likely an educated guess with a high number of tourists in the area being Israeli.

Born in Sudan, he explains he lived in a kibbutz for five years. There was no of way of knowing if the details were true, but the story seems valid when he displays an Israeli passport and speaks broken Hebrew (often repeating the same words according to my friend.)

“What you have to understand is there are three tribes of Rasta” he explains. “Naibingi, Bobo Shanti…but I belong to the 12 tribes.” The 12 tribes were founded in 1968 by Dr. Vernon “Prophet Gad” Carrington and is the most liberal of all Rastafarian orders.

The sect considers themselves the direct descendants of the 12 sons of Jacob. Like a teacher educating his pupils we listen intently to the words he utters as startled onlookers do a double-take to ensure they aren’t dreaming at the sight.

I peered behind the side of the café to see a group of teenage boys chuckling to one another, pointing in our direction.

“Rasta where are our coffees?” the Rastaman demands after the prolonged wait for our cup of Ethiopia’s most famous drink and one of the country’s major exports.

Finally, the coffees arrive, but not in the way we expect. A thick layer of butter on the surface of the drink proved unbearable to our taste buds. It was overpowering, sickly, and undrinkable. We tried to make our excuses to avoid causing offense. “It’s an acquired taste,” my friend said diplomatically.

“It’s lovely but our stomachs aren’t used to this” another added. “I want you to meet my four wives and Israeli guests. Just kick it” the Rastaman said, urging us to down the coffee like a shot of vodka. We couldn’t so he drank it on our behalf before we collectively ‘kicked it’ and left.

“Follow that Rastaman!” my friend said jokingly as we tailed a white car with a thin blue stripe etched through the middle – the same unfortunate color scheme as every taxi ahead of us. Raslmumba David is in a car ahead, guiding us to his home.

We dodge the cattle roaming the road, weaving between chaotic lines of traffic before spotting the Rastaman wave his gangly arm from the back of a vehicle as we enter a side street.

We arrive at his gated home, apprehensive but excited. Is this something we really want to do? Were we actually going to the house of a man we had just met in a coffee shop? The doubts were pervasive in my mind. “I’m not going in. I’ll guard the car” my friend Richard frantically suggested, his tension palpable and altogether understandable.

But any remaining reservations soon vanished. Tall gates adorned with a number of Star of David symbols made the place look like a synagogue. “David’s my son’s name. It’s my father’s name. It’s also the name of my King” he explains. This was more than a house. We were in a commune, a haven for alternative backpackers and casual drug users.

There were benches, most painted in the colors of the Rastafarian flag. In the center was a giant rug shielding the sun. It was kept in place by poles liberally painted in a palette of greens, yellows, and reds. Beneath lay a statue of a lion staring in a menacing pose.

Tall plants with huge banana leaves and thick bushes dominated the scene. The Rastaman was keen to show us the fruits of his labor: the pumpkins, avocados, bananas, and coffee beans.

He also grew khat and an abundance of marijuana, much of it located in a four-acre field nearby: “I don’t want him to know about it” he says pointing to one of the young men who work for his cause. Buried deep underground was a disco room — fully equipped with DJ mixing equipment, a sound system, and dance floor for party-goers.

Hanging proudly on the walls are Israeli and Rastafarian flags. Every detail, the Rastaman insists, has been carefully planned.

Even the six windows in the room are strategically placed to allow sunlight into the venue at different times of the day.

But what of the man himself? Raslmumba David claims to be a regular visitor to Shepherds Bush in West London, an area popular with the Rastafarian community.

He insists he also works as a music promoter. “I won this land in an auction. I built it all from scratch. The people who work for me do it for the love” he claims. I’m skeptical. The men doing the heavy lifting are no volunteers.

In a white vest shuffling a wheelbarrow, I see one of the builders glance nervously in our direction. Much of the top floor of the buildings are under construction. Efforts to build a jacuzzi and rooms for paying guests are all in the Rastaman’s grand plan. He also wants to build bedrooms for each of his four wives. “I have an Ethiopian, Israeli, Japanese, and an American wife.

They all love each other and they all love me. But if I were you I wouldn’t marry four women” he says laughing. We briefly meet his Ethiopian wife. Wearing a simple brown dress, she is carrying a washing basket in her arms. But the other three wives are conveniently absent. I suspect his polygamous relationships are no more than a façade constructed to impress others. 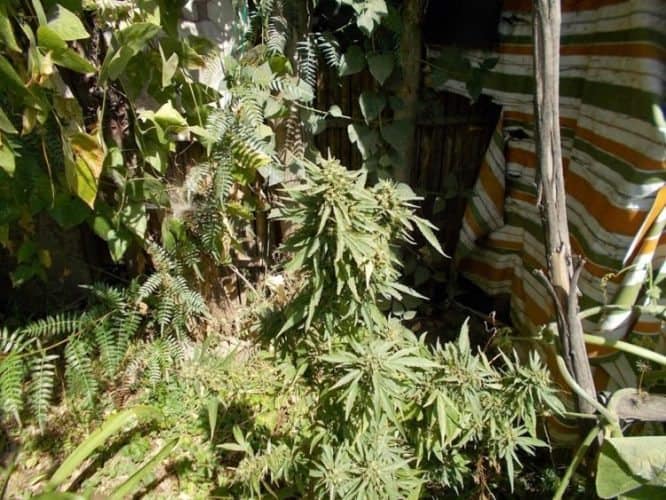 We end the tour of his abode in a purpose-built museum room, packed full of artifacts, books, and photos. We see a picture of the Rastaman with Haile Selassie’s grandson (sporting a tracksuit).

He goes on to speak of Rastafarianism with a religious zeal you cannot help but admire. Known as “wisdom weed” or “holy herb”, marijuana, he says, has a deeper significance beyond its recreational use.

The Rastaman proudly points to a book showing the medicinal benefits of the drug, “It can help people too”. He shows us a picture book of history’s famous ganja users. With a wry smile on his face, he points to a portrait of a British monarch. “Look. Even Queen Victoria smoked it.” She was given the drug by her doctor to relieve period pain.

Before returning to our resort, we stop at a banana tree art museum. One of the Rastaman’s workers, no doubt keen to impress his boss and secure a tip from us, joins for the visit. We also pay a local youngster to watch our car. Afterward, when we drop off our acquaintances, the atmosphere turns menacing. The kid who watched out for our car wants more money.

Looking thoroughly aggrieved, he sticks his hand through the window, refusing to leave without additional cash. We give him extra money and rapidly drive off before he can ask for more. As I peer out of the car window, the young man has made his way into the commune. He too has been drawn to Raslmumba David’s crew and this inexorably expanding empire in the heart of Shashamene. 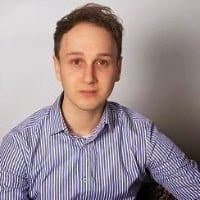 Adam Corre is a freelance journalist based in London, England. He has written for various local and national media outlets. Follow him on Twitter @AdamCorre