Nova Scotia was called Acadia by its earliest French settlers in the 1500s. Today’s name, given to the big landmass later by the English, means “New Scotland.”

For an American looking for a great summer holiday a world away but just an hour by plane from Montreal, there is no better choice than New Scotland.

We flew to the capital city of Halifax from Montreal on Porter Air, a small airline that operates out of Toronto and flies the Dash 8-400 turboprops. That means one class throughout the cabin and everybody gets free wine, snacks, and comfort.

Porter is trying to shift to a fleet of small Canadian-built jets, but to do this they have to convince Toronto to make longer runways by filling in the lake, which might be a tough battle. As of 2020, they had not been able to do this, so it’s Dash 8-400s all the way.

Halifax is a sparkling and vibrant capital city. We checked into The Halliburton, which dates back to 1809, and is located on Morris Street, just a few blocks from the busy waterfront. The morning sun glinted off the water as a parade of pleasure craft and working ships passed by. It was time to get down to the water!

We walked through a damp mist to the busy boardwalk, three kilometers long, that stretches from Pier 21, a former ocean liner terminal, to the Casino Nova Scotia. The smell of seafood chowder and poutine was in the air!

In the distance, we could see the cranes and large cargo ships that

make up the largest seaport on the east coast. The Halifax harbor is the second largest ice-free port in the world, so shipping goes on year-round. Trucks drive right onto the ships to deposit their containers.

View a photo gallery from Nova Scotia by the author

Beside the big shipping port is the beloved Pleasant Street Park, 187 acres of beach and woods enjoyed by Haligonians and visitors alike. Sadly, in 2003, more than 90 percent of the trees here were blown down by a hurricane, but the beach is still a prime summer attraction. 134 cruise vessels visited Halifax in 2012, with 252,847 passengers. from May through October. It’s a very busy harbor!

Halifax has exciting energy that comes with being a capital city, full of students and visitors from many countries. It was the first city in Canada to get electric lights.

The city also has a major connection to the famous Titanic disaster–it was the closest major city to the site of the sinking, so many of the numerous victims ended up being buried in the city or at sea.

In the downtown Maritime Museum of the Atlantic, there is an exhibit with many Titanic artifacts, and interesting displays showing the various classes the ship carried. From down in steerage to up top where John Jacob Astor slept, this exhibit also includes a replica deck chair from the ship and a pair of shoes belonging to a tiny tot who perished in the wreck.

For anyone who is fascinated by the timeless Titanic story, this museum is a must-see. There are also many exhibits about seafaring and Nova Scotia’s relationship with the ocean.

Just outside the museum is the long boardwalk that includes many shops selling seafood chowder and poutine. Both of these dishes are as Canadian as they can get, and each time we ordered the chowder it was delicious and fresh. Nova Scotia is truly a place for seafood lovers, second to none.

We would sample many other fine seafood dishes over the course of our journey and perhaps the most delicious were the bowls of chowder we had in a tiny village of Blandford, on the South coast.

We heard about the place at a tourism information stop…it’s called The Deck, and it’s a combination general store, post office, and lunch bar.

Looking up, the ceiling was almost entirely covered with tea towels from all over the world, tacked up we suspect by visitors who must gift Annie White the owner with these souvenirs. “This is the Blandford mini-mall,” said Annie.

As we made our way to a booth overlooking the water, a couple from Ottawa told us that hands down, this was the best seafood chowder they had ever had. “It’s the best in North America!” exclaimed the man, who said they have come here for five years to indulge.

We asked Annie, who has owned the joint for 16 years, what her seafood chowder secret was. “No flour. No herbs. No spices. Just fresh haddock, scallops, shrimp, lobster” she said.

Annie keeps it simple and makes big batches of chowder plus a variety of pies. Which is the most popular? Coconut Cream Pie.

But we did more than just eat seafood on our Nova Scotia journey. We discovered that the Annapolis Valley, about an hour north of Halifax, has 22 grape growers and a well-established wine country with 16 vineyards that are open for tasting. There is even a wine tour bus to take you to the vineyard after vineyard, out of Wolfville.

The L’Acadie blanc grape and the fine rose wines they make up here are spectacular. When we got home and told our friends about the fine wines we sampled in Nova Scotia, nobody had ever heard of them, and that’s because none of this fine wine is exported to the US. So it remains a special treat we could only enjoy up north.

We began our day of wine tasting in the compact and pretty town of Wolfville, where we got treated like newlyweds in the Blomidon Inn’s delightful cottage, located next to the stately main inn building.

The inn was once a sea captain’s mansion and there are paintings of elegant ships and serious sea captains inside the well-preserved salon and dining room.

Dinner at the Inn included their own house-smoked maple salmon and a delicious combination of sea scallops with fruit salsa. Another delicious meal with great Nova Scotia wines paired.

We set out following signs for Luckett Vineyards. That sounded easy, but it turned out to be a near goose chase as we drove on and on through the countryside, each time we saw the sign it led to another sign and then another.

Up on a hill, when we finally made it, the first thing we saw was their famous English phone booth. Stepping inside, we were told we could phone any number in the world. So we did.

Each of Nova Scotia’s wineries has their own personality—Lucketts is owned by Pete Luckett, an Englishman who also owns a beautiful gourmet store called Pete’s Frootique.

I know this guy’s truly English when I saw they sold Marmite alongside the rows and rows of organic vegetables.

Another winery with free tasting is Gaspareau, one of the area’s first wineries. Here, along with great tastes, we got some great advice on which beaches to check out as we drove south.

Our days in Nova Scotia weren’t just spent sipping fine wine, we got a little wet and very dirty when we joined a group of Canadians for Tidal Bore Rafting in Urbania.

The advancing tide in the Bay of Fundy at this narrow point is funneled into a powerful torrent, and soon we went from relaxing on a sandbar to rollicking in the 10 foot high waves, plunging into the crashing water and seeing it flood the Zodiac, as we all screamed with fear mixed with fun.

You know you’re gonna be getting wet when you see the suits they dole out, still this full on swimming/riding in the boat makes people laugh with delight.

We circled around, going back into the terrific whitecaps that seemed so incongruous here in this river, just below a big green bridge. Our guide Steve, 27, told us how extensive the training was to pilot a tidal bore raft, reassuring us before we began plunging into the waves.

He said he usually brings his springer spaniel Patches in the raft with him but today the pup didn’t make it down to the riverside departure area in time. Tidal Bore Rafting is offered by several different operators near Urbania, The Tidal Bore Rafting Park offers 10 cottage and a licensed restaurant, along with showers and lockers for after the ride.

This is definitely a thrill worth checking out since you can only tidal bore raft in two places around the world and none as high or wild as this!

Nova Scotia’s inland is rolling farm fields, most of the main roads go in a circle around the most popular tourist towns like Halls Harbour and Lunenburg. We found Lunenburg to be the most beautiful, perhaps because of the combination of preserved houses and the very accessible working waterfront.

Lunenburg is also the home of the Maritime province’s most famous wooden ship, the replica of the Blue Nose.

It’s still being refurbished but visitors can see it in drydock and soon they will be able to take day sails on this boat, whose original namesake was called “The Queen of the North Atlantic” because she was the undefeated winner of the International Fisherman’s races.

A feature of the Fisheries Museum of the Atlantic in Lunenburg are real-life fishing boat captains who are posted at various rooms of the museum to answer questions.

I learned a great deal about how the cod have recovered and what life is like today for modern fishermen when I chatted with one of them aboard a retired fishing vessel docked at the museum.

After a moratorium was declared as the cod stocks plunged in 1994, the fishing captain said, most locals moved to scallop and lobster trapping. Even though stocks have recovered well, there only a small industry to harvest cod anymore. As of 2020, cod had reappeared on the menus and dinner tables here, thanks to conservation.

Another fishermen sat next to a dory used by early offshore fishermen on Nova Scotia, sharing tales of his former life at sea.

Having these real-live men to share stories is far more compelling than anything on a video screen. The fisheries museum also has an area with glass cases filled with local fish and sea creatures and a friendly guide who explains it all. 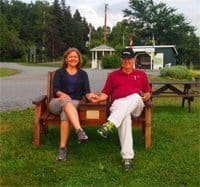 Nova Scotia is a great destination for Americans, so friendly, only an hour by air from Montreal, and full of some of the world’s greatest seafood, including the finest cod on earth.

Every interaction we had with locals was cordial, I can’t recommend it highly enough, there is just so much to enjoy!

Buy our Eastern Canada Plane Reader for to-go stories for your Kindle, Nook or IPad.