Everything You Need to Know About Air Travel in One Book

Got a bad case of air travel anxiety? Does your heart drop to your stomach as soon as the airplane starts rolling down the runway even though you’ve done this for the 100th time?

Smith, an airline plot and author of the web’s popular Ask the Pilot feature breaks down the basics of air travel with questions, answers, and reflections. Not only does he tell you the real story behind delays, congestion, and the dysfunction of the modern airport, but he also explains the physicality of flying.

Cockpit Confidential is filled with brilliant writing and extremely helpful information. Most importantly, Smith separates myths and misconceptions from facts including cabin air and cockpit automation.

Throughout his seven chapters, he also touches upon terrorism in an interesting perspective while expanding upon a provoking look into security. Smith writes without beating around the bush, and clearly shows his readers how turbulence really works, why airline customer service sometimes sucks, and even an inside look into pilot training and the men and women who fly you from point A to point B.

This book is a must-read for any first-time and traveler, in general, to clear up confusion, fear, and overall curiosity about air travel.

Excerpt from Chapter 1. Plane Truth: Things about Wings and Why Knots

Elementary Question: So how do these enormous airplanes, carrying tons of passengers and cargo, stay in the air to begin with?

Yes, this forms the kernel of every layperson’s curiosity about airplanes. But while the idea of getting hundreds of thousands of pounds of machinery smoothly into the sky would seem a marvel, if not a miracle, how it all happens is surprisingly elementary and easy to demonstrate.

Next time you’re on the highway in your Toyota, hold your arm out the window, perpendicular to the car and parallel with the ground. Bend your hand upward slightly, biting into the airflow, and what happens? You make a wing, and your arm “flies.”

Fear of Flying: How to Beat It

And it will remain flying for as long as you keep your hand at an adequate angle, and keep driving at a fast-enough speed. It flies because the air is holding it up. With an airplane, it’s no different.

Granted, you’re not getting the Toyota off the ground, but now imagine your hand is really, really big, and the car has enough horsepower to go really, really fast. Becoming airborne is all about procuring the right surpluses among the four competing forces of flight; that is enough thrust over drag, and enough lift overweight. Or as Orville Wright put it: “The airplane stays up because it doesn’t have time to fall.”

There’s also something in flying 101 known as Bernoulli’s Principle, named for Daniel Bernoulli, and eighteenth-century Swiss mathematician who never saw an airplane. When forced through a constriction or across a curved surface, a fluid will accelerate and its pressure will simultaneously decrease.

Our fluid is air, which moves faster over the top of the wing, which is curved (less pressure) than it does along the flatter surface below (higher pressure). The result is an upward push; the wing floating, if you will, on a high-pressure cushion.

I’ll be chided for a less-than-nuanced explanation, but truly that’s the gist of it: Bernoulli’s pressure differential, together with the simple, hands-out-the window deflection of air molecules, provide the indispensable component of flight: lift.

Loss of lift is called a stall. Again, the basic idea is easily demonstrated back on the highway: tilt your hand a little too steeply, or brake the Toyota below a certain point, and your arm ceases to fly.

Turbulence scares me to death. Do I have reason to be afraid?

Turbulence: spiller of coffee, jostler of luggage, filler of barf bags, rattler of nerves. But is it a crasher of planes? Judging by the reactions of many airplane passengers, one would assume so; turbulence is far and away the number-one concern of anxious passengers. Intuitively, this makes sense.

Everybody who steps on a plane is uneasy on some level, and there’s no more poignant reminder of flying’s innate precariousness than a good walloping at 37,000 feet. It’s easy to picture the airplane as a helpless dinghy in a stormy sea. Boats are occasionally swamped, capsized, or dashed into reefs by swells, so the same must hold true for airplanes. Everything about it seems dangerous.

Flying Questions for a Pilot

Except that, in all but the rarest circumstances, it’s not. For all intents and purposes, a plane cannot be flipped upside-down, thrown into a tailspin, or otherwise flung from the sky by even the mightiest gust or air pocket. Conditions might be annoying and uncomfortable, but the plane is not going to crash. Turbulence is an aggravating nuisance for everybody, including the crew, but it’s also, for lack of a better term, normal.

From a pilot’s perspective, it is ordinarily seen as a convenience issue, not a safety issue. When a flight changes altitude in search of smoother conditions, this is by and large in the interest of comfort. The pilots aren’t worried about the wings falling off; they’re trying to keep their customers relaxed and everybody’s coffee where it belongs.

Planes themselves are engineered to take a remarkable amount of punishment, and they have to meet stress limits for both positive and negative G-loads. The level of turbulence required to dislodge an engine or bend a wing spar is something even the most frequent flyer- or pilot for that matter 0 won’t experience in a lifetime of traveling.

If all jet’s engines were to fail, can the plane glide to a landing? 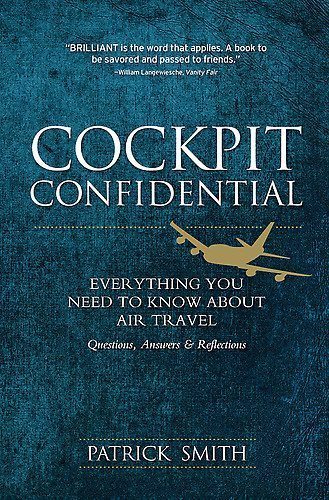 While it may surprise you, it’s not the least bit uncommon for jets to descend at what a pilot calls “flight idle,” with the engines run back to a zero-thrust condition.

They’re still operating and powering crucial systems, but providing no push. You’ve been gliding many times without knowing it. It happens on just about every flight.

Obviously an idle-thrust glide is different from the engines quitting outright, but even then, the glide itself would be no different. There’s no greater prospect of instant calamity than switching off the engine in your car when coasting downhill.

The car keeps going, and a plane will too. In fact, the power-off performance of a large jet is better than that of a light Piper or Cessna. It needs to glide at a considerably higher speed, but the ratio of distance covered to the altitude list- close to 20:1- is almost double. From 30,000 feet, you could plan on a hundred miles worth of glide.

Total engine loss is about as probably as a flight attendant volunteering to give you a shoe-shine, though it has happened. Culprits have included fuel exhaustion, volcanic ash, and impacts with birds. In several of these incidents, crews glided to a landing without a single fatality or injury. In other cases, one or more engines were restarted before reaching the ground.

Midway across the ocean, I watched as a 747 approached us and flew close alongside for several minutes. It was just to the left and beneath us, so close that you could see people through the windows. I often see planes passing at such alarming proximity. Are these near misses?

This is a great illustration o what I like to call PEF, or Passenger Embellishment Factor, the phenomenon that accompanies so many accounts of dodgy takeoffs, supposed near misses, and so on. Earmark this page for the next time you’re subject to a water cooler tale like this one.

Not to belittle your powers of observation, but distances aloft can be hard to judge, and passengers have an extremely common habit of underestimating separation with other aircraft. During cruise, plans will always be a minimum of 1,000 feet apart vertically or three miles horizontally.

Flights on the transoceanic track systems frequently encounter one another more or less as you describe. It can be startling –a 747 is a big ship, and even from a thousand feet away it looks awfully close – but it’s perfectly safe and routine.

The rules are different for takeoffs and landings. With simultaneous approaches to parallel runways, for instance, planes can be at the same altitude and a mile or less apart- though they remain under the very close watch of ATC and must also maintain visual contact with one another.

Buy this book on Amazon Cockpit Confidential: Everything you need to know about air travel