A County Jam-packed with history and culture in Southeast England

The county of Essex is the preferred retirement destination of many an East End gangster and since the 1980s has been the nub of Essex Girl jokes which focused on young working-class girls.

They are noted for their fake tan, bleached blonde hair and white stilettos. The all-time classic joke is (‘How does an Essex Girl turn on the light after sex? She opens the car door’) which has been retold in many a far-flung shore.

But contrary to what a lot of people may think, Essex is a county of contrasts. Epping Forest, (which is around 6,000 acres of open land) stretches 12 miles through part of the East End to just north of Epping in Essex.

Deer roam freely within a few hundred yards of the busy M25. Essex also has much old-world charm, quaint villages and a residential Lord of the Manor. However, this isn’t the Essex of popular imagination.

The name Essex comes from the Old English astseaxe which means East Saxons. The Anglo Saxons – a Germanic people invaded England around 450AD.

Pope Gregory the Great is said to have seen some blonde Anglo Saxons being sold in the slave market, had likened them to angels and therefore felt they should be converted to Christianity.

So in 597 AD St Augustine, an Italian monk along with other helpers arrived at Canterbury from Rome to convert the Anglo Saxons to Christianity.

First Christian King of Essex is discovered – around 1,400 years old. This Saxon ancestry has recently been rekindled at the coast nearest to the East End of London – Southend-on-Sea.

Despite many peoples snobbish condescension about this part of the world, in 2003 a chance discovery made everyone sit up and take stock.

Archaeologists saw bowls hanging from hooks in the walls of the chamber, just as they had been placed on the day of the funeral. It was described as “a moment genuinely frozen in time”.

Although the king has been eaten away by acidic soil, it is the artifacts carried with him to the after-life which is of huge historical significance.

A day out in Southend-on-Sea is a Cockney pastime. Along the seafront, sandcastles, plastic cartons of vinegar-sodden chips, candy floss and cylinders of rock candy are the order of the day. The pleasure pier is the longest in the world and well worth a visit.

You can take a leisurely stroll which will take you around 2 hours but if you have kids on tow, hop on the small train that runs twice-hourly.

If however, you wish to get away from the crowds, go almost three miles further up the coast where you will find the fishing village of Leigh. The sheds are open daily where you can buy pots of jellied eels – a truly Cockney snack cooked with water, salt and lots of parsley, then set in the gelatin they have released – surprisingly delicious, but douse them in the vinegar first.

Henry VIII King of England secretly wooed Anne Boleyn at Rochester Hall here. Take the A127 (the main road from Southend to London) and after six miles you may decide to turn off for Hockley where a story unwinds that changed the course of history.

The striking manor house Rochford Hall (which is now used as a clubhouse for a posh golf course) is where King of England, Henry VIII wooed his mistress Anne Boleyn who became his Queen.

Henry cut off from Rome and became the head of the Church of England. Few people know this place exists and it is not open to the public but you may feel like spying this piece of history.

However,  If you want pure brash and brassy, carry on along the A127 for another six miles until you come to Basildon where you will discover the epitome of Essex girl culture. Basildon Festival Leisure Park, the area’s largest entertainment complex, is a basic concrete jungle with places to eat – mostly chains and, of course, the nightclubs.

Due to slum clearance, many strong East End communities were transferred to this 1960s new town where the Cockney dialect is alive and well. Girls appear outside these nightspots — they stand, shivering, with no coats on, spectacularly under-dressed in silver miniskirts, and strappy sandals. Chicago Rock Cafe Tel: 01268 53100

Resting place for pilgrims at Brentwood: Traveling around nine miles from here will take us to the contrasting town of Brentwood which St Thomas Becket made famous as he kick-started a huge pilgrimage tradition. Around 1221, a special chapel dedicated to St Thomas Becket was built in the town of Brentwood as a resting place for pilgrims on their way to his shrine in Canterbury.

Today Brentwood is a Cathedral Town. If you enjoy choral or classical music phone the Cathedral for details of events. Tel: 01277 265288 for details of performances. Tickets are very reasonable. music@dioceseofbrentwood.org.

Despite the broken down chapel’s distinctive position in the middle of modern bustling Brentwood high street, it appears largely forgotten. Even the tourist information office that sits beside it has absolutely no information on its mysterious medieval next-door neighbor.

The pilgrimage to Canterbury was so heavily ingrained into medieval life that the pace of the horses adopted by Canterbury pilgrims apparently gave us the word “canter”.

Signposted all the way from Brentwood high street is: “Secret Nuclear Bunker” which I always find quite amusing. It’s a bit off the beaten track and located at Kelvedon Hatch around 4 miles away taking a North West direction. An audio guide is your only companion as you mooch around this extensive underground ex-government site – perhaps not everyone’s cup of tea – rather spooky but a great experience. There is also a reasonably priced cafe and gift shop Tel: 01277 364883 www.secretnuclearbunker.com

If we travel east for six and a half miles, winding country roads will take you to the delight which is Ingatestone Hall – steeped in recusant history. The word Recusant derives from the Latin word recusare meaning to refuse and refers to those who refused to attend Protestant services after the Reformation – to do so was a statutory offense and they were subject to huge recusancy fines.

This was at the time when King of England Henry VIII decided to break from Rome and become head of the Church of England. People who attended secret masses risked their lives and the hanging of Catholic priests was sanctioned.

This 16th-century manor house was acquired by Sir William Petre, (the secretary of State to four Tudor monarchs) in 1539. A number of Jesuits were given refuge by Sir William Petre’s widow, Lady Ann Petre as well as John Payne (later to become St John Payne) who posed as a steward at the house.

The current Lord John Petre, disheveled with a cigar in hand, greets me smiling. He leads me to the study with its oil paintings, huge fireplace and carved oak panels. He shows me a priest hole where priests were hidden so that the practice of the Catholic Mass could still take place. The entrance could be sealed and the hatch at the far end of the cell could be used to pass food to the priest. There is something intriguing about being able to feel what was intended never to be seen or found.

Liturgical music is part of the Petre heritage. William Byrd, arguably the greatest Elizabethan composer is most famous for his liturgical music for the Catholic Church, which was banned under Queen Elizabeth I. His family joined the Catholic community presided over by the Petres and took part regularly in secret masses celebrated at Ingatestone Hall. Ingatestone, Essex CM4 9NR Tel: 01277 353 010 www.ingatestonehall.com

Around a mile away the sleepy village of Ingatestone is one long narrow street – in the middle, you’ll find The Star Inn, a tiny 15th-century pub with low-beamed ceilings, a huge open log fire and they serve real ale. Sometimes they have live music at the weekend (you have to check.) Tel: 01277 353339

Where the last Saxon King of England was allegedly buried:  If you wish to experience the finale of the Saxon world you will have to take a bit of a trek about 20 miles to the north of the county. King Harold, the last Anglo Saxon ruler of England, famously killed on the coast of Hastings in 1066 is traditionally believed to be buried at Waltham Abbey.

A sacred stone cross (or apparently it could have been a piece of the cross Jesus died on) was brought to Waltham, from which comes the old name for the district: Waltham Holy Cross. Apparently, Harold was miraculously cured by the cross as a child.

King Harold’s corpse was supposed to have been identified by the inscription Ealdgyth tattooed over his heart. Incidentally, both his wife and mistress were called Ealdgyth!

If you are looking for something a little bit different try the Royal Gunpowder Mill with 21 rooms of major historical interest. It’s a 3-minute drive from the Abbey or you can walk it. Check the website out: www.royalgunpowdermills.com. After your sightseeing enjoy a cuppa and some of the best scones I have tasted at the 16th-century timber-framed Philpott’s Tea Room near the Abbey. However, they are not particularly child-friendly here.

Despite Essex’s reputation for villains, the nouveau riche; footballers and page three girls, the county is also jam-packed with history and culture. It certainly has its share of factories and scrap yards, and yet its ancient woodlands are among the best-preserved in Britain. Perhaps this hotchpotch of the gritty and the prized are what make Essex unique. 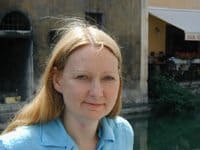 Susan Hegedus began her career as a newspaper reporter for the Daily Jang in London. Her interests include exploring old churches, reading novels and playing the banjo Currently she works as a freelance writer. She lives in England in Billericay, Essex and has a BA (Hons) English degreewww.susanhegedus.com