Madagascar: Getting to Know a Little Known Culture by Bike

There are lampshades and masks, picture frames, jugs and even toy cars. They cover low shelves and tabletops, and tall pillars supporting this unusual three story shop. Outside, adjacent to the road, the unmistakable forms of baobab trees decorate a circular landscaped garden. The allotment is equally well tended, bearing zucchini, tomatoes and onions.

On a low step the color of clay, a lemon yellow mountain bike has been turned upside down for minor adjustments to its gears. Four young children gaze at the vivid contraption, one of them, hands on hips, shaggy dreadlocks flowing, giggles at mechanic Stéphane’s good-natured teasing.

Behind them the clang, bash, bang of industry reverberates from open-sided shacks shading adults and teenagers absorbed by their craft. They are transforming battered oil drums into the furniture, ornaments and souvenirs for sale in the shop. This is not the country of chancers I have been warned of. Instead it is philanthropic innovation in one of the poorest nations in the world.

It is less than 24 hours since my arrival in Madagascar, where endemic wildlife and beachside idylls might lure thousands but for an unpopular coup in 2009. The overthrow of elected (but controversial) president Marc Ravalomanana by former disc jockey Andry Rajoelina is still unrecognised by almost all governments, the richest of which have withdrawn development aid setting back the country’s infant prosperity by several years.

Without funds to protect it, primary rainforest is being ravaged by island-wide slash and burn farming, a quick fix that bears harvests for two or three years before soil becomes so poor that new land must be sought. Unemployment has soared to 50% in some areas; up to 80% of children never go to school.

But at the metal-crafting works I am visiting with cycling companions from the UK and Netherlands, I see only courtesy and hard work. On our route east from the capital Antananarivo (Tana) and north up the coast, the picture is similar. Special animals and blissful beaches are one thing but it is what lies behind that intrigues me more.

Life is Not Important

In the big scheme of things, life is not important to the Malagasy, our guide Klaus explains as we stand in respectful silence alongside the huge circular stone that once closed the entrance to the 1810 tomb of King Andrianampoinimerina, a much abbreviated version of his name.

The monarch conquered several smaller kingdoms to form the powerful Merina realm which his son, King Radama I, extended with British backing. We scramble through scrub and piercing sisal to reach an open rectangular space housing the memorial and several smaller nods to Andrianampoinimerina’s family and warriors.

The King’s name is inscribed on the wall of a small hut opposite. It is a tranomanara, or cold house, built for protection on sites such as this but only where royalty was buried. “People bring offerings to the King and I hear now that he sometimes asks for Coke,” Klaus says.

The site is one of 12 sacred hills close to Tana and on our descent from the summit we pass a man whose body quivers in worship to a higher being from whom he seeks a good harvest. Half of Madagascar’s 22 million people still practice pagan rituals. The remainder are Catholics and Protestants in equal measure.
Colorful and crafted fruit and veg stall 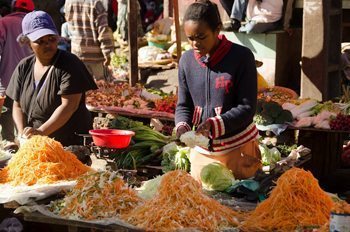 Some of those Christians belong to the whitewashed church of Andisabe, a bustling village sandwiching a narrow bumpy track two days’ ride from Tana. Near the Hotel Orchidee where balconies overlook a worn soccer pitch on one side and swampy pond opposite, it is clear just how irrelevant materialism is.

Elsewhere women and men beam smiles from fruit stalls and tiny shops selling everything from torches to toothpaste. Always people gather when we stop but never to threaten or berate and rarely to beg.

Youngsters, particularly, are alert to the new form of amusement our strange ways and weird hats provide. Their shout: “Salut vazaha!” ? hello pirate (Portuguese pirates were the light-colored people to arrive on Madagascar) is our constant companion.

Madagascar seems a youthful country and we see children everywhere, sometimes walking to school, working the land or tending younger siblings by roadside shacks. They sprint barefoot alongside us before turning with friends to mock, or sit watchfully when we stop, chewing sticks of sugar cane.

Some high-five us as we slow through hamlets on a series of sweeping descents from the hillside village of Beforona and when we stop for lunch a group collects around our back-up crew’s mobile hand-washing unit.

The tables are turned at the plush Masoandro Lodge on Isle Sainte Marie, a stomach-churning boat ride from Madagascar’s north-west coast. From the hotel’s palatial hillside bungalows we spy humpback whales breaching at sea.Through day and night container trucks rumble past carrying goods from the port Tamatave to the capital, later juddering the ground of our Ranomafana campsite.

One of my companions, Tim, inflates a balloon he has brought from London and gives it to a girl warily eyeing us as we erect tents. She is captivated by this new toy, her face a picture of innocent joy.

A Distant Song in Madagascar

As we gather for dinner, distant song outside the dining room distracts us again from bar-side chatter. Nine youngsters emerge from the gloom, six in printed cotton tops, replica grass skirts and woven headbands decorated with lilac flowers. 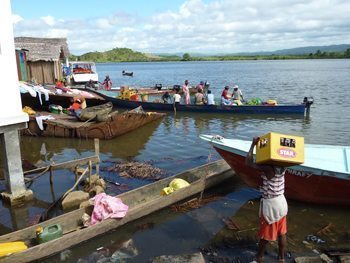 The performance precedes our meal of ravitoto ground cassava leaves traditionally complimenting beef stew from zebu cattle. “But tourists ask for chicken and fish now,” Klaus says, both of which are available here too.

The rich chocolate cake that follows fuels our final and most rewarding ride on tracks across Sainte Marie the next day. Angostino is our guide and has established a cycling business at the port town Amboifotatra since emigrating from Italy three years ago. “Europe is so difficult”, he says. He sounds relieved to have got away.

He and colleague Fabrice are experts in local flora and fauna, some of which is not native. They point out tall date palms and eucalyptus, and the round hairy leaves of the “toilet paper plant” (Tristemma virusanum).

There are clove trees too – its oil can anaesthetise toothache – and the small mauve flowers of rosy periwinkle. This pretty, low-growing flower is one of Madagascar’s 9,000 endemic plants. It’s cancer-fighting properties are widely recognized.

Unique too is the capital Tana where we spend our last day after a one hour flight above the Indian Ocean’s warm waters. Tana is a humming, hustling city where the poor are very poor and street souvenir sellers determined and persistent.

Away from its tourist hub, up the cobbled climb towards the renovated queen’s palace, is another large circular stone marking the 1972 burial site of poet Edouard Andrianjafintrimo. There is no protective tranomanara, however; he was clearly not that important.

We are warned of pickpockets as we leave the palace but none appear, even as we gaze down at the expanse of city enclaves slotting between rust coloured hills. Soccer never seems penniless and the monolithic national stadium and its large circular stand draw the eye. In fairness, it has a running track too.

Close by is man-made Lake Anosy and its crumbling walkway which leads to a statuesque war memorial called the Black Angel. Lean fishermen stripped to their underwear walk back and forth in the lake’s shallow water encircling their catch with threadbare nets and shaking the wriggling fish into a silver sack. Beyond jacaranda trees on the lake’s north-western edge a row of 20 tiny huts house busy barbers.

November is the time to see the jacaranda’s dazzling purple-blue flowers but there’s something about Madagascar all year round for Klaus, although he’s never been able to pinpoint quite what. He emigrated from Germany 15 years ago to establish the Momotas travel agency in the southern city of Antsirabe. “Madagascar is like no-where else,” he says. “It isn’t like Africa, Asia or even like France despite being a former French colony.”

It was four hours before Klaus escaped airport bureaucracy when he first arrived yet on emerging “it was a 150-minute decision to stay. I thought I’d miss magazines and the cinema but I don’t. I only miss a good bottle of wine and good bottle of whisky.”
Wild lemurs still thrive in protected parks.Photo by Chris Beynon 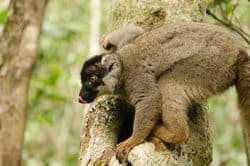 More significant is the trick Madagascar’s marketeers are missing in failing to promote Malagasy culture, the equal, Klaus is certain, of the country’s wildlife and beaches. “Visitors should forget about electricity and hot water and go into villages and meet the people,” he urges.

The familiar lampshades and pictures hanging at Tana’s Grand Mellis Hotel suggest that culture and craftsmanship are at least being appreciated here. I have relished the chance to see it in the flesh.

Cath Harris is a UK-based travel and environment writer. She has visited five continents and enjoys wild, mountainous regions most. Science and sports writing are Cath’s other specialisms. Read her articles at www.cathharris.co.uk