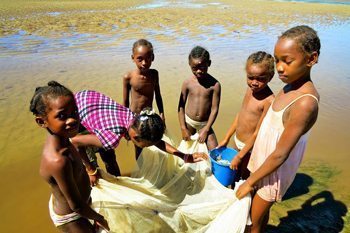 Nosy Be, Madagascar: A Step Back In Time

I’ve never been much of a ‘Bucket Lister’ but if I was I could now cross Madagascar off my list.

My mosquito bites may have faded but my memories of this far away land seem almost surreal. Good thing I took lots of pictures, or I might think it was all a crazy beautiful dream.

Madagascar’s 12-foot tidal change every twelve hours made the forever changing landscape magical. Every moment seemed like a new adventure. This was not just a vacation, it was a mind-altering trip of a lifetime.

My adventure to this far away land was the perfect mix of land and sea, I spent equal amounts of time both exploring the land and sailing into the African winds.

I went scuba diving for my first time in the Indian Ocean off the coast of Nosy Sakatia. I danced the night away under the stars with the children of Nosy Komba. I had close encounters with Lemurs, chameleons and snakes at the Lokobe Reserve, and I was stung by a school of jellyfish while swimming to the Island of Ankazobepavina. Ouch!

I hiked to the top of Russian Bay, where I soaked my feet in the rust-colored waters of the ancient Russian Bathes of yesteryear. And at the end of every day I enjoyed the African sunset until it disappeared below the horizon and then watched the stars come to life.

Madagascar is a hidden gem, mostly untouched by man, not easily accessed, but well worth the effort in getting there. I spent a week with ‘The Sailing Collective’ sailing in and around the Nosy Be Archipelago.

My time spent on land was most enjoyable, I was lucky enough to call the Anamarango Beach Resort home away from home for about a week. Nosy Be is situated off the north-west coast of Madagascar, and it’s a magnificent place to explore.

To lounge the day away on a beach or to set sail and explore the many islands, most of which can only be reached by boat, Madagascar is a place that will take you back in time.

It’s a beautiful island, it offers amazing snorkeling and diving opportunities and some primitive forests with amazing wildlife that can’t be found anywhere else in the world. So if Madagascar is not on your bucket list, it should be.

The name ‘Nosy Be’ means “big island” in Malagasy, though the island has been granted several nicknames over centuries, “Nosy Manitra” (the perfumed island) was the most popular of all. As soon as you arrive at the airport your nose will soon understand why.

Scents of ylang-ylang,(pronounced lang-lang) coffee, cacao, vanilla, and sugar cane plantations spread all over the island and distill a balmy fragrance that will delight your sense of smell.

The yellow Ylang Ylang flower is one of the products used in the production of perfume. The trees naturally bend to the ground to ensure easier picking of the flowers.

It was a long, bumpy, dusty, taxi ride to my hotel, so when the driver pulled over on the dirt road and got out of the car only to return through the cloud of dust with a beautiful yellow flower just for me, I was pleasantly surprised by his kindness.

Red pepper is also distilled as a perfume too, but the ylang-ylang is the most popular amongst the villagers and tourists alike.

Nosy Be’s landscape is varied and it is characterized by a great many hills that are overlooked by Mount Lokone and Mount Passot. From these high vantage points, you have an exceptional view of Nosy Be Bay, but also of the Radama Islands in the south and Mitsio Islands of the north.

There are eleven volcanic lakes on the island, which constitute an enormous water reserve for humans and crops. The whole coastline is punctuated by a great number of gorgeous bays and deserted beaches lined with palm trees.

There are also many small islets and rocks which are often visited by people seeking some private beach time. Temperatures are pleasant year-round. The humidity can be particularly bad during the tropical summer.

Land of the Lemur

I explored the lush jungle of Lobeke Nature Reserve in search of the infamous lemurs of Madagascar. Make sure you do this as part of your itinerary, this is the real deal. It’s an adventure that will be difficult to top.

After a long dusty car ride, our driver came to a stop where the dirt road ended, from there we had to walk past a small cattle farm and trudge through a half-mile or so of sandy muck in order to reach the outrigger canoes that awaited our arrival.

Lokobe Reserve is located on the Southern end of the island and it’s the only place in the world where you will find the elusive lemurs living and thriving in the wild.

These sleepy, big bulging-eyed, furry creatures are nocturnal for the most part, they hide in the tops of trees under the jungles canopy by day, and they don’t seem to be bothered by us humans, just as long as you keep your distance.

As I walked through the jungle these magnificent creatures started to emerge, black and brown, blonde and yellow, each one more incredible than the next. Babies and Mama’s, shy ones, and others that were a little more active.

I couldn’t help but think how long it would be until the ways of man destroy this ancient treasured secret land and spoils all of its beauty. As incredible as it was, I still felt like I was trespassing. I respected these creatures, as it should be, I looked but didn’t touch, it should be a requirement for all visitors.

Our guide pulled a six-foot baby Boa from a tree, I had hoped he would let it be, but our small group was amazed by the snake. Our keen-eyed guide pointed out many chameleons along the way and I even spotted a giant snail all by myself.

Make sure you have local money exchanged and on hand as there is a little village with local artwork and handmade crafts, such as hand sewn and embroidered table cloths and bedspreads. Bottled water and bug spray is a must, and don’t lean on any trees to take a break, the fire ants will eat you alive.

The Island of Sakatia, is home to the incredible Sakatia Lodge, home of the best yogurt I’ve ever tasted and it’s where I went scuba diving for the very first time and let’s not forget, it was also home to ice cubes, yes, you heard me right, ice cubes.

Ice cubes quickly became a sought after item throughout the trip and as time passed ice became somewhat of a mysterious luxury item.

When you spend a week on a boat in Africa, ice is not a priority, it’s also not an easy item to keep on hand, the African temperatures just don’t allow for it.

After spending about five days up north sailing the Mitsio archipelago, some of the most remote Islands off the coast of Madagascar, it was the Sakatia Lodge that came through with not only ice cubes but crushed ice!

I had hit the jackpot! It was an oasis, a warm shower, and the best rum and coke ever. So much ice, that my glass sweated all over the bar. It’s the little things that make a difference when you are far away from what you know.

I have to say the most rewarding part of my trip to Madagascar was meeting the people. I’ve said it before and I’ll say it again, less is more. The people of Madagascar live on the equivalent of about two US dollars per day.

Most have nothing, they live in shacks with dirt floors, yet they all have big smiles on their faces and seem genuinely happy.

They are surrounded by family and when you have nothing but the family you realize what’s most important in the world, it’s not money, or things, it people.

The Gift of Giving

On my last full day in Madagascar, I packed my bags and realized I had collected many souvenirs and I needed to purge my bags to make room for my new found treasures.

So I went through and pulled out everything that I knew I could live without. T-shirts, shorts, capri pants, toiletries, and more.

I made a big bag and decided that I would walk to the nearest village that was about a mile and a half down the beach to donate my belongings.

I announced my intentions to my group and they donated some items to the pile. I made my way down the beautiful stretch of beach, It didn’t matter that I didn’t speak the language, a smile is universal.

My gifts although used made many villagers very happy, and that’s what it’s all about. Trying to make a difference when you can. A smile costs nothing and can change everything if you allow it.

I was greeted by the children at first, soon after the elders came out to see what the ruckus was and before I knew it I was surrounded by the whole family, young and old.

I offered my gifts and we shared a few laughs. I took their pictures and showed them the images in the viewfinder of my camera. The matriarchs with the silver teeth laughed out loud and put their hands up to cover there mouth to hide their teeth.

My trademark was ‘Pop Rocks’ I brought enough for many of the kids to share. I loved watching their faces when the sweet candy popped in their mouths. Eyes lit up and they laughed out loud as I watched them experience something new.

I handed out a lot of pop rocks and gave away my clothes, I took a lot of pictures and made a few people laugh, but the gift that I received on this day were the smiles from the happy people of Madagascar.

Jean Miller Spoljaric has a great time when she travels, and it really shows in her stories and her eye-popping photos. She brings her unique brand of enthusiasm to the art of travel writing. She lives in New York’s Dutchess County.