Arzak: A Friendly Visit to a Michelin 3-star

It’s just a restaurant, I thought, nothing to be afraid of. And yet standing across the street from it, I was a little afraid.

That’s because it wasn’t just any restaurant. It was Arzak, a place that experts consistently include among the world’s top ten restaurants — most recently, it was ranked eighth by Restaurant magazine. Arzak, set just outside the Spanish-Basque city of Donosti (San Sebastian in Spanish), is one of only 109 restaurants on the planet that’s been given three stars by Michelin, the renowned dining guide.

One of its owners, Juan Mari Arzak, is a living legend, literally a chef to royalty; the other, his daughter Elena Arzak, was named Veuve Clicquot World’s Best Female Chef last year.

And who was I, by contrast? I’m certainly no connoisseur, not even a foodie. That’s why I was intimidated. But that’s because I didn’t know Arzak.

Arzak is a place with chefs who’ve cooked for the Spanish prime minister and Queen Elizabeth II but who put the same amount of effort and imagination into meals served to commoners.

It’s praised by the world’s most demanding dining experts but still, retains the warmth and friendliness of a corner tavern.

I saw that first-hand during my visit: A diner from Alabama asked if he could be seated without a jacket. Yes, Elena Arzak told him. A couple of minutes later he returned with a gift, an Alabama Crimson Tide visor, and the world’s best female chef promptly tried it on.

So it didn’t take me long to relax after I first walked into the restaurant on the outskirts of Donosti, a gem of a city in the Basque region of northern Spain also known as San Sebastian. Expecting an ornate entry, I was surprised to see a simple, small waiting room and bar.

Elena Arzak, busy preparing the next meal, came from the kitchen to greet me. She’s the fourth generation of the Arzak family to run the restaurant, and it wasn’t hard to see the affection she has for the place.

As a child, she watched her grandmother in the kitchen cooking traditional Basque dishes like hake with clams and fresh-grilled cod. She began to help, cleaning squid, preparing herbs, whatever tasks needed to be done, and eventually, she cooked her first dish, tonton de bonito (tuna) (“it wasn’t bad,” she told me). By age 17, she knew she wanted to be a chef and studied cooking in Switzerland. She worked in restaurants in London and Paris, among other places.

But inevitably, she said, “I did what my heart told me.” She came back to the restaurant her great-grandparents started in 1897, a place that over the years became famous around Donosti and the larger Basque region, particularly for big events like wedding receptions. Couples booked Arzak first and the church second.

Grew up in the Kitchen

Like his daughter, Juan Mari Arzak grew up in the restaurant’s kitchen, and after studying in Madrid, he came back. But he had high ambitions for the place and set up a separate grill outside the main kitchen so he could experiment.

In the mid-1970s, he and other Basque chefs like Pedro Subijana, influenced by the nouvelle cuisine of France, developed what would become known internationally as the “new Basque cuisine,” an haute cuisine style that retained Basque roots but experimented with lighter and less rustic versions of traditional dishes.

This new Basque-style has “nothing to do with the cuisines of Galicia and Extremadura,” Juan Mari once said. “We have Basque spirit but we also fly all over the world to see what’s there.”

They would take a Basque staple like hake and combine it with tastes from completely different cultures and cuisines — mole, ginger, tandoori.
It was an exciting time for a talented generation of Basque chefs, who produced some of the best cooking in Europe and began to attract attention internationally. Arzak won its first Michelin star in the 1970s, and its third in 1989 (a status it has retained every year since).

Juan Mari’s Basque colleagues became successful with their own restaurants like Akelarre, Martin Berasategui, and Mugaritz — which, incidentally, is the world’s third-best restaurant this year.

Together, they put new Basque cuisine on the map. Among the restaurants of Donosti, a city of about 200,000, there are a total of 15 Michelin stars, more per capita than any other city in the world.
Arzak’s food is the perfect example of new Basque cuisine, both traditionally Basque and researched-based, Elena said.

“We don’t cook the same all the time. We are always evolving. In 15 years we’ll be cooking completely differently.” The restaurant has its own cooking laboratory on the second floor, a kitchen dedicated solely to creating new dishes.

Arzak chefs aren’t afraid of failure: Only a small portion of what’s created in the laboratory ever makes it on the Arzak menu, “because sometimes it just doesn’t work out,” Elena acknowledged. As they experiment in the laboratory, chefs rely on the condiment room next door, a remarkable place with about 1,600 spices and seasonings from around the globe. I saw labels identifying seasoning from China, Japan, Mexico, and dozens of other places.

It was time for Elena to go back to work and time for me to eat. I went into the dining room, which is modern, with impressions of utensils pressed into the walls, but still retains an old-world flavor. It’s also relatively small, with about 70 seats that are filled during every meal. 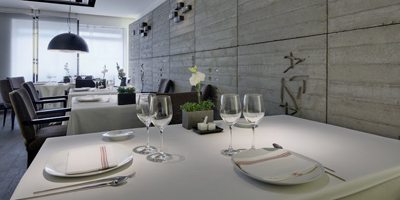 Silence in the Dining Room

I was alone in the dining room for a moment. I noticed something: silence. There was no music playing.
Then the performance began. Out came the appetizers: chorizo served on a bent Schweppes can, sardines with strawberries, potato chips on skewers, dry ice under the plates. This wasn’t Applebee’s. The sommelier, one of two at the restaurant, made the first of many visits and poured me a glass.

It occurred to me that not only was I dining in the world’s eighth-best restaurant; I was dining there alone. Since I was focused almost solely on the food, I appreciated it more and reached a rapid conclusion: I was experiencing tastes that I had never experienced before and never would again. That’s why you go to a place like Arzak.

My only company was the outstanding staff, which was friendly, not at all stuffy. I was never out of sight from somebody who could help me. The table was reset between each course. Every question was answered.

There were dishes I wasn’t entirely sure how to eat, including the second course, a mysterious concept called “Cromlech,” named and shaped after the prehistoric monoliths made of stone slabs. It was crispy and filled at the tip with foie gras and caramelized onion. My server told me I could eat it with my hands, but that seemed inappropriate in the world’s eighth-best restaurant, so I tried my spoon.

That failed, so I surrendered and went back to my hands. Regardless of how I consumed “Cromlech,” I had to stop in between every bite to contemplate how delicious it was.

By that time, a good hour into my meal, the restaurant was filling up. Juan Mari and Elena came out from the kitchen, and they visited every table as they do at all Arzak seatings. I could have left happy at that point, but I was nowhere near finished:

*Lobster cut into pieces and shaped like clothespins. Salad with tapioca.

*A poached egg topped with sesame and mussels. It was not only the best egg of my life; it might have been the best thing I’ve ever tasted, period.

*White tuna in a garlic sauce, with figs on the side. There was a flower on the plate, purple, so tiny I could barely see it. My server said I could eat it, so I did. Fantastic.

o Pigeon with hibiscus pudding garnished with tiny yellow flowers, all served on top of an iPad that showed a digital fire.

What course was I on? Eight? Nine? It was hard to remember a time in my life when I hadn’t been in that restaurant.

*Dessert: peach ice cream formed like a footprint; little chocolates in the shape of a ladybug, filled with peach mousse; sweets that looked like bolts, keys, nuts.

I finally stood up from the table, victorious.

One Last Drink with Arzak

But then the ultimate treat: Juan Mari Arzak invited me for one last drink. We sat by the bar in the entry room. He told me about his mother, who took the restaurant over after his father died when Juan Mari was nine. “The kitchen was small,” he said, “but she was a magician. I loved working with her.” He never doubted he would work in that kitchen himself someday, and even though he could have opened multiple restaurants around the world, Arzak is where he put his energy.

“The dishes we serve here can only be found here. Everything has something to do with Basque culture, but we make it new. Advance it. We like to have fun with the food, we don’t take it too seriously. It’s like a circus. We like to make things that turn from gasses or powders to liquid.”

That was Arzak: excellent and memorable but fun, not too serious, and — above all — unique, an essential goal Juan Mari had set for the place as he once described: “I don’t want to happen what’s happened with modern music. You’re at a disco. It could be Vegas, Hollywood or San Sebastian. You close your eyes, you don’t know where you are. We have to know where we are.”
We spoke for almost an hour.

He was like a favorite uncle, and I would have been content to listen to him talk about food all afternoon until Arzak’s next meal. But he had to make that next meal, so it was time for me to go. He walked me to the door. “Hey,” he said, putting an arm on my shoulder. “You’re a nice guy.”

I opened the door and I had to adjust to the heat and the light and the reality outside, where I was once again just another person.

Mark Bieter is an attorney and journalist in Washington, D.C. More of his writing can be found at www.bieterblog.com.