An Eco-adventure in Sardinia

After a misdiagnosis filled me with a new appreciation for my eyesight, I developed a craving for wide horizons and open water.

I wanted to see and to learn, so last summer, I joined a Bottlenose Dolphin Research Institute expedition in Sardinia, Italy.

BDRI offers a variety of options throughout the year, from cruises to residential courses and volunteer programs.

An Italian journalist, Sergio Frau, hypothesized that Sardinia might be part of the “lost continent” of Atlantis. It’s believable, given that millions of years ago shifting tectonic plates jiggled Sardinia and Corsica from the tip of Europe, leaving the landmass to drift toward the North African plate and splinter in two. I was intrigued. Sardinia was a well-traveled woman with a mysterious past.

She was also aloof, an island and semi-autonomous region of Italy that moved to her own rhythm, with her own unique flora and fauna. Stereotypes about summer in Italy – reckless drivers, impatient, caffeinated crowds and purse-snatchers on Vespas – dissolved in the Sardinian sunlight and sea breezes.

Hoping to blend, I took a week-long residential language course at Studitalia, in Olbia. As a major hub situated a quick train ride away from Golfo Aranci, home of the BDRI, Olbia offered a convenient base of exploration.

The language school also proved cost-effective for a short stay; vocabulary-dense lessons in the morning with time off in the afternoon for exploring. Opting for accommodation with a local family also helped stretch my vocabulary and broaden my knowledge of local lore.

Having arrived from the mainland just days before, I was instinctively clutching my bag when I arrived at the Olbia train station. No need to be vigilant though, since only a handful of people could fit into the waiting area.

As I delivered my request for a ticket in labored Italian, the attendant listened with characteristic patience, coaching me along with his “bene, bene.”

The trip to Golfo Aranci was off to a reassuring start. My seat neighbors, a young Australian couple, were in love — with Sardinia’s hospitality and scenery.

They had been hosted and toasted by strangers and were ready to change citizenship. They cooed whenever the doors of our little trainlet opened onto the surreal stations, directly into dense vegetation or onto craggy beaches, perfumed by a sun-warmed tangle of herbs and shrubs called maccia.

Within minutes of leaving the city, we were at the Gulf, home to a non-migratory colony of dolphins. Three white beaches stretched along the Gulf like a string of pearls. Although many bathers and boaters descend on the town during peak season, there were many tranquil times and spaces.

Since I didn’t have much unprogrammed time available, I chose the five–hour “researcher for a day” expedition. Bruno Diaz, the intense, dark-eyed captain of the BDRI program, has volunteers help with data gathering about marine traffic and its impact on the sea.

When describing the expedition, he specified, “It’s not a typical cruise where we visit beaches. The goal is to learn.” Volunteers learn about marine ecosystems, the environmental impact of human activities and the basics of navigation. A certificate is awarded at the end of the trip.

Bruno decided that we would start the journey at the end of the afternoon when the heat haze and the crowds fade by degrees. We were six on board the cozy, low-eco impact vessel, five humans from three different continents and generations, and Luna, the captain’s corgi.

From my vantage point on the upper deck, I was immersed in a crystalline continuum of sea and sky. We were sailing into infinity, but we wouldn’t see dolphins for another hour. Bruno shook his head as a motorboat whizzed by. “Not enough regulation on the number of these boats,” he worried.

“I ask boaters to at least change certain habits – don’t follow marine animals too closely, cut the motor when you’re further in – these things can help,” Bruno explained. The sound of waves licking the sides of our vessel eventually gained on the drone of disappearing motorboats.

The waves crested where the Tyrrhenian Sea wrestled with the cold Atlantic currents, and our boat began bucking like a horse. I flexed my knees and gave in to its canter. Bruno was bristling with attention, alert to wing beats, and waves.

“Take the wheel,” he called out unexpectedly, as he trained his binoculars on a speck in the sky. I felt a moment of panic until I saw a more experienced volunteer step up.

A Corsican seagull had caught Bruno’s attention. It was a good sign since their sightings had dropped in recent years. As a landlubber, I often looked toward the shore, but Bruno suggested I look downward at the turquoise veils of the Tyrrhenian Sea, jeweled with silvery fish.

Catching a Show at Sunset

The sun began unraveling in pink and purple bands as we rounded the limestone outcrop of Tavolara Island, rising out of the water like the ridged back of a prehistoric turtle. Once called the island of Hermes, the island is still inhabited mostly by winged creatures and exotic mountain goats. Mirrored below Tavolara’s heights is Secca del Papa, an underwater mountain shaped by seismic forces resting near the point of contact between the Eurasian plate and African plate. The surrounding waters are studded with coves and coral, a treasure trove for divers.

We were approaching an area ringed with fishing nets, where the dolphins often congregate, looking for loose “crumbs”. The stillness grew as we held our breath with collective intent. Luna’s ears pricked up like antennae. It felt as though we were the last humans on earth, seeking contact with this species, waiting for them to break through waves of silence to assure us that intelligent life remained.

Then, a dorsal fin sliced the water and vanished.A sleek adult male was threading in and out of the water around us. Dolphins can stay under for up to three minutes and may resurface far from their point of entry. It was hard to keep up with the choreography, but very engrossing.

“Are they always this brave with you?” I asked Andrea,a crew member. “They seem to know Bruno,” she explained, “and they have a whistle for him.”

Suddenly, Bruno called, “there, on the left of the nets, get your cameras ready!” A pair of two-week old dolphins, about the size of collies, were arching over the water. “We haven’t seen them before,” Bruno confirmed. “New babies.” The spot where they had surfaced held our gaze long after they had disappeared.

The sea had given birth to new hope.

Sardinia is accessible from the mainland by ferry ( Europe’s Ferry Booking Portal) or by air (Easy Jet);

BDRI offers a day long cruise (90 euros) or a six-day stay for volunteers (600 Euros including room, board, and field work and training);

For cultural immersion, stay in Olbia and take Italian at Studitalia for 285 Euros (accommodation plus week a long-course in small groups at a friendly school), then hop over to Golfo Aranci for a day-long BDRI expedition. 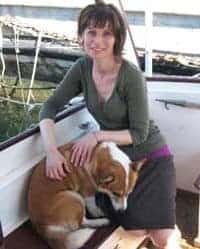 Linda Handiak has worked as a language teacher, farmhand, and assistant mason during her travels abroad. Her adventures can be found on the Go Nomad and Matador Travel web sites and in 101 Green Travel Tips, published by Life Tips.