A Trip to Sardinia to Meet the Family

In Sardinia’s capital, Cagliari, the bridal couple picked my husband and I up at the airport and drove us along the Via Roma (a road). In the median were prickly pear cacti and pink and white oleander.

Once checked in at our B&B, our future son-in-law led us past tabacchi shops, dress shops, shoe stores, and café after café until he found one where no one was smoking.

My first lesson in Italian was that antipasti literally means before the meal, the first in a seven-course Italian meal.

He treated us to his favorite traditional foods. We started with prosciutto and pecorino cheese, grilled mushrooms, eggplant and peppers.

The pasta was linguine sprinkled with a delicacy known as bottarga, dried mullet roe, with the salty scent of the sea. The fish course featured mussels and squid. The Carne was a mixed grill of meats and sausages.

The insalata, vine ripe tomatoes, arugula, radicchio, cucumbers and the sweetest carrots I ever tasted. Formaggio and fruta followed. We skipped desert or dolci, in favor of a walk back to the piazza for gelato. This was just the first in a string of extravagant meals to welcome home the son who left his island for America and honor his bride-to-be and her parents.

We were six hours ahead in Sardinia, and morning came early. Our adventure for the day was a winding uphill walk to the citadel where caper vines and bougainvillea climb the castle walls.

Covering up for Modesty

We entered a cathedral at the top, and an old woman at the door handed my daughter, in shorts and a tank top, a red shawl and a beige wrap-around skirt for modesty. The entry twinkled with wrought iron trees of votive candles.

The towering arches were laminated in gold leaf. A podium rose above the pews like a baroque island above the waves. This was the first of many churches on our journey.

In the afternoon we were invited to the mid-day meal with the fiancé’s family, including his beloved Nonna.

My daughter coached me beforehand on how to hug and air kiss on both cheeks, but her dainty future mother-in-law gave me a bear hug and petted my hair.

I learned to communicate by cheating with words I knew in Spanish, easily recognized by speakers of Italian. We made small talk over spaghetti and clams, and whole sea bass that my son-in-law carefully boned; and finished with cherries, Nonna’s favorite, and sweet tiramisu made by his dad.

Under the Olive Trees

We ended the afternoon strolling in the park under rustling olives where my son-in-law played as a child, past peacocks fanning their turquoise and lapis tails, past ducks swimming in pairs, past turtles sunning on logs; and paused on a shady bench and watched children romp as birds chirped in the eucalyptus.

On our third day, we headed towards a village farther north for another meal with his mother’s sister, her husband, and a cousin. Their home was a modest cement building with a partially covered patio filled with potted geraniums and a grape arbor. The uncle and fiancé hauled the kitchen table outside.

The aunt, about four foot six, spread a sparkling white, cut-lace tablecloth she made herself, on the table. She served a dervish from pearl onions to a whole a suckling pig. No hospitality was spared. We lounged over the last course; delicious Italian custard and my husband snapped a photo of the miniature woman standing in front of a queen size crocheted bedspread, millions of perfect loops in an ancestral pattern.

For the next few days, my daughter and her fiancé acted as tour guides and took us to the resort town of Alghero. We enjoyed calm, shallow beaches, and like children, played pitch and catch with patate di mare, matted balls of seaweed shaped like hairy potatoes. We took a break from the usual seven courses, and relaxed with thin-crust pizza of pomodoro and pecorino as the sun sets over lapping waters.

The night air was warm, and we wandered the cobblestones sampling flavors of gelato: limone, melone, ananas (pineapple), and fruitti di bosco (raspberry/blackberry). I ordered what I thought was lime, but turned out to be oregano. Even oregano gelato was delicious.

We passed jewelry shops laden with crimson coral and Sardinian filigree, postcard kiosks, and carts selling torrone, made of spun honey speckled with almonds and hazelnuts. We rounded a corner, drawn by piano music from a civic theater performance and peered into an adjacent cathedral awed by its lectern of red marble, and surrounded by sparkling candles.

Returning to Cagliari, we got down to business – the wedding dress. We joined the fiancé’s mother and sister at an atelier. Every dress looked gorgeous on my beautiful daughter, but when she stepped out of the dressing room, onto the dais, in the one, we all knew it!

It came with a matching veil and the fiancé’s mom asked who will lift the veil. In my week-old Italian/Spanish/pantomime, I explained that after all the promises, after the ring’s symbol of eternal devotion, the groom, her son, would lift the veil and be invited to kiss my daughter, his beloved bride.

With my spiel hopefully understood, I turned. Tears streamed down the dusky cheeks of my daughter’s future mother-in-law, and I knew that she already loved my little girl.

Dinner Outside in the Shade

There was one more meal to meet the father’s side of the family. We traveled to a farm on the outskirts of a village where the hosting uncle is a baker. He welcomed us with dolci made from almonds, formaggio and orange zest, thin bars rich with dates, and espresso served in a demitasse with teeny tiny spoons.

We greeted with the few polite phrases we had learned until the kitchen table was carried outside and set up on the shady side of a shed, where the cheerful uncle said he plays Jimi Hendrix on his guitar with friends.

I lifted my eyebrows. “È vero?” I thought I said really in Italian.

Behind us was the aunt’s herb garden fragrant with lavender, rosemary, sage, and lemon verbena. Uncle toured us through the other outbuildings: a bathroom, a workshop, a barn, and a room with a brick oven with a spit long enough to pierce both a lamb and two roosters still crowing at dawn.

The three-hour meal was our new routine: olives, onions, sardines, malloreddus, still another kind of pasta, roast lamb, chicken, bread to soak up all the juices, stalks of celery and plum tomatoes, more cherries, dolci and espresso.

The women cleaned up the dishes, and the men wandered the orchard of apples, apricots, lemons, and figs. Nonna and her sister dozed in the sun. As a guest, I was left at the table with the young adults eager to practice English: a half-sister, a recent au pair in London, a cousin, who hoped to pass the entrance exam to a high school specializing in languages and literature, and another cousin, about to graduate the same high school, having majored in ancient Greek and Latin.

I told him my pastor often shared the meaning of words in ancient Greek when explaining Scripture. He leaned in and told me one of his professors gave him a New Testament in both Greek and Latin to study.

I told him I used to be a teacher, but now I write. He showed me his high school’s first prize for his novel. We high five’d as fellow authors. He asked what I wrote. I told him about my memoir of teaching in a poverty school, and about my blog about coming to know Jesus. The au pair oohs and aah’ed at the word blog.

The younger cousin lit up at the name of Jesus and said that he is Christiano. In halting, labored English he explained that Christianity is presumed in Italy because of the Catholic Church. He told me his friend’s mothers make them go to mass.

“But this is not it.” He pinned me with clear gray eyes, and in his beautiful accent said, “I am not ashamed to follow Gesù even if my friends don’t understand because—it is a beautiful life—full of joy!”

We high five’d, as the men came around the corner excited.

The fiancé translated, “We tried to take a walk down the road, but there were carabinieri, the national police, outside the farm gate. They said a leopard escaped from a private zoo less than a thousand feet away, and we should go back inside.”

The chickens rioted. The aunt’s lapdog yapped. It was time to say arrivederci and head home. 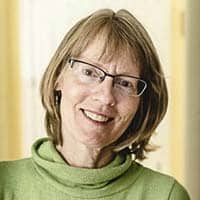 Ann Averill earned her BA from Syracuse University in creative writing and her MA from the University of Colorado at Denver in language, literacy, and culture. She lives in the foothills of the Berkshires in Massachusetts with her husband, her kitty cat and a flock of disappearing chickens.