Excerpt: Let Me Stay for a Day

GoNOMAD Book Excerpt: “Let-me-stay-for-a-day,” around the world for free 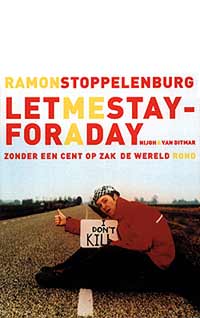 The media all over the world called him the world’s greatest freeloader; others saw him as a pioneer who took full advantage of the possibilities of the internet. In two years Ramon Stoppelenburg traveled through The Netherlands, Belgium, France, England, Ireland, Scotland, Denmark, Norway, Sweden, South Africa, Spain, Australia and Canada.

For free, thanks to sponsors and the media who praised him for his clever thinking and his own website: letmestayforaday.com, on which people from all over the world could invite him over to stay for a day. Travel companies flown him around the world for free. Television shows clamored to have him as a guest. Sponsors gave him gadgets. He was the Internet’s first travel celebrity, according to the British Sunday Times.

Excerpt: Let Me Stay For A Day

Via Inverness I traveled through the Scottish Highlands to Fort William. My host in Inverness, a Norwegian flight courier, took me halfway down along the water of Loch Ness, from where a primary school headmaster from Australia stopped along the road to give me a lift to Fort William.

It took me two days to get away from the quaint little place – Fort William is one of Scotland ’s tourist hot spots with an image as if the Dutch draftsman Anton Pieck would have painted it. A lonely ski lift on a green hill even makes it one of five places in the Scottish mountains where you can ski in winter. It had never occurred to me that people could ski in Scotland!

After one night in Fort William I tried catching a lift south. I spent more than four hours in the pouring rain and got used to the idea that no-one wanted to offer me a ride. I gave up for that day and was lucky enough to be able to spend another night with my host family in Fort William.

The following day there was hail in the early morning, pouring rain the rest of the morning and just a little bit of sunshine in the afternoon. Scotland is a funny country weather-wise.

I was given a lift by a guy from Wales, who’d spent the weekend in the far north. He could use some company during the more than four hundred kilometer journey down South. Driving though the last bits of the Highlands, breathing the clean air and looking through valleys of lakes and rivers, we finally approached Glasgow, where I spent the night.

While heading southbound I saw the dreary mountain scenery turn into the lush green hills of the Scottish Lowlands. That is where I met a truly fascinating person.

I was picked up from a spot by the motorway by Douglas, whose two loudly barking dogs didn’t allow me to sit in front, so I sat in the back of the van. From the exit to the old mining village of Elvanfoot we drove westwards to reach a place which, by Douglas’ account, was called Daer. It wasn’t on my map of the United Kingdom but, according to Douglas, Daer used to be a lively market village for the local farmers.

‘Nowadays, it’s nothing much,’ he told me. ‘There’s one house left, and one school.’

Douglas had invited me to Daer, but hadn’t told me that he lived in the school.

‘Great, isn’t it?’ he asked me while he unlocked the chain lock on the front door and letting me in. ‘Squatted it myself!’

I walked through a long corridor of what had clearly been a school once. One of the classrooms had broken windows and was filled with junk. ‘That’s the shed.’

Next, I entered a classroom with pieces of cardboard and carpet on the walls. Obviously, this was the living room. In the middle there was a small wood stove. A number of windows had cracks in them, which were taped over with sticky tape to keep the draught out.

There was no running water anymore, since the plumber had refused to return after his first visit. Douglas’ water was supplied by a creek behind the building and his fresh drinking water came from the single house across the road. Electricity was generated by a diesel generator outside.

While my host made coffee, I wondered why anyone would want to live as isolated as this with no modern facilities.

‘I’m a gold panner,’ Douglas said, exposing an uneven set of yellow teeth in his mouth. ‘Very few people know, but there’s lots of gold hidden in the soil of Scotland and Wales.’

He told me how every day he takes his dogs down to several streams nearby. In the middle of small river he digs into the ground with his hand. Everything he digs up, he studies for traces of gold dust in a pan.

‘And even if I find a tiny amount, I know I’m in the right place,’ he said. ‘That way I know there must be grains of real gold upstream, which could lead me to nuggets.’

Douglas sipped his coffee. ‘But that hasn’t happened yet.’

He wore a chain around his neck made of his favorite grains of gold. ‘These aren’t worth much,’ he said, ‘but if the gold’s pure enough, I take it to the city, where I know a man who can keep my findings a secret and he pays me well.’ The latter he said in a whisper.

On the walls hung several large, roughly drawn maps of Britain. On them dates were written parts were colored purple and green as they had been scratched on by a small child.

‘Here,’ Douglas said when I looked at one of the maps, ‘some really large nuggets were found here! I came to this area because no one had found anything here yet. I could be the first. And, you know what?’ he said pointing at an area colored purple on the map, ‘Here, off the coast of Wales there’s more gold than you can imagine! If I’m ever able to recover it, I’ll be very rich!’

During dinner I asked him whether he had always been a gold panner.

‘I started panning gold for health reasons. I had enough of my job as a secret agent working for MI5 and MI6.’

That really surprised me! Was I seriously having dinner with a retired James Bond?

‘I started as a sailor with the Royal Navy, Douglas said. ‘And because I knew so much about the world, I advised the Ministries of Foreign Affairs of foreign countries, which is how I ended up in the secret service.’

‘No, eventually I became a security expert’, and Douglas got all his evidence out. He showed me photographs of himself in a uniform on big Navy ships and in the dessert of Oman. ‘I designed the infrared defense line around a secret American army base in England.’ He then explained the entire system to me, so I now know everything about this infrared protection that I now only have to find that secret American base.

‘To make some money on the side, because I wasn’t earning much, I registered myself for medical tests and was paid well for subjecting myself to several medicinal tests. Eventually the secret service declared me unfit. They said I’d gone crazy, they said. I was sad, but meanwhile I knew what was hidden in Britain’s soil and how I could make lots of money from it. The only thing I needed to do was find it.’

I looked at him as though I believed him, but inside I was laughing my head off. I didn’t doubt this all being his truth, particularly when he told me how the medicinal tests had ruined his body, but I’d never heard such a bizarre story.

Douglas would have loved to take me on his search for gold, but because there was the Foot and Mouth Epidemic at the time in 2001, the local police officer wouldn’t allow him to go to his work. I would have liked to give it a try.

In the morning I skipped the cold shower and after a quick breakfast, I was ready to depart again. Douglas took me down in his van and – out of affection for the barking dogs – I sat in the back seat again until Douglas dropped me off at the motorway. I thanked him for hosting me for a day and his interesting stories.

On my way to my next destination, I got a lift from a man who, when was young, had hitchhiked through large parts of Europe. He told me how he ended up in Amsterdam once and he bought a big bundle of cannabis. After a while he reached the German border where he was told to either hand it in or smoke it all. He camped several days at the border and smoked it. My driver laughed out loud for narrating his discernment in my home country.

Having picked me up from such a remote spot on the motorway, he wondered where I came from.

‘I stayed with a gold panner in Daer,’ I told him.

‘Oh no! Not that crazy gold panner? Did he tell you about his meeting with the Pope? Or about his space missions which were cancelled at the last minute, or about how he ended the Cold War by just in time connecting the right phone lines in a submarine in the Atlantic? He also seems to know where Marilyn Monroe and Elvis Presley are.’

Ramon Stoppelenburg (28) studied journalism in his home country The Netherlands, until he couldn’t stop that itchy feeling called ‘travel the world’. During his travels he wrote a great number of travel chronicles for daily newspapers in various countries. Nowadays he works at a pub, specialized in relaxing massages and is a hosts of a travel show on Dutch national radio.

To see how it all began: www.letmestayforaday.com

‘One guy from Chicago said he could stay as long as his wife didn’t object. And if she did, hell, he’d pay for a hotel’ – Wired.com

‘No money no problem for hitchhiking Web celeb’ – The Miami Herald, United States

‘Blooming scroungers, all of em! Go get yourself a proper job and be miserable and parochial like the rest of us!’ – The Register.co.uk

If you have any questions about foreign rights of the Dutch bestseller “Letmestayforaday”, you can send an e-mail to the Dutch Publishing house Nijgh & Van Ditmar at rights@querido.nl, or a fax to 0031205511227.