Discover Paris Through the Eyes of an Artist

Janice MacLeod’s novel, A Paris Year, recalls on one woman’s day to day encounters in one of the most beautiful and romantic cities in the world.

Open the pages to this alluring novel and you will be transported on a visual journey through the streets of contemporary Paris. Illustrations and sketches allow the reader to visualize the text and appreciate the charm both the locals and architecture bring to the city.

A Paris Year chronicles one artist’s tale of discovery, with personal observations and amusing anecdotes, from the month of January all the way until December.

Be delighted, inspired, and charmed as a New York Times best-selling author invites you into her own personal diary and takes you on a captivating adventure directly into the City of Lights.

After quitting her corporate job and moving to Paris, Janice MacLeod explored the sights, smells, and tastes of Paris with nothing more than a day planner and her own ambitions. MacLeod brings the city to life with hand-drawn illustrations and photos, creating a dreamlike portrayal of the city.

Janice MacLeod is the original artist behind the Paris Letters Project and author of Paris Letters, a New York Times bestselling book.

After mailing painted letters about her travels in Paris to her friends, they encouraged MacLeod to sell the customized illustrated letters on Etsy. MacLeod has given thousands of letters to fans worldwide ever since.

Born in Canada, Janice Macleod worked in advertising for several years and now spends her time traveling abroad and sipping coffee with her husband, Krzysztof Lik. 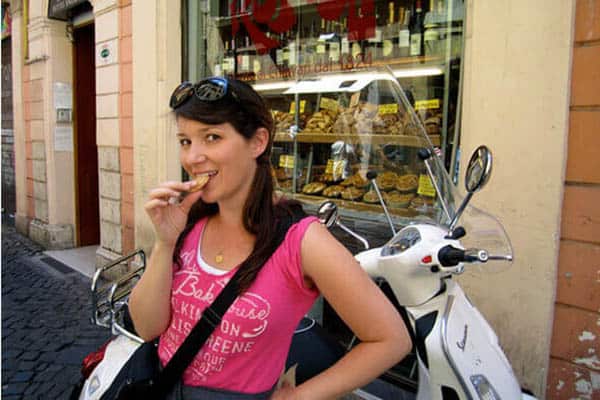 “Life in Paris starts with Bonjour. This is the magic word, the Open Sesame, that will turn you from an etranger (foreigner) to a local. It is to be said with confidence. No shy weak whispered greeting will do. It’s best to be bellowed and followed with either Monsieur or Madame.

Once I pardoned and excusez-moied my way through the airport, I was ready to master the key word that would unlock my way into French life. I learned it by repeating the following two-phase conversation daily with every familiar face:

There is no waving hello. This is not the French way. When you wave hello their eyes follow your hand like a litter of kittens. Non. They prefer words.

Nothing quite stirs up emotion, nostalgia, and romance like a walk along one of the many bridges of Paris. All are unique. All have their own story. Napoleon built a few. The stones of the destroyed Bastille were used to build another.

There is also a bridge for making wished and another for lovers to add locks and toss the keys into the water as a symbol of commitment or to make a memory or something.

Christophe and I haven’t bothered, preferring instead to partake in another tradition of sharing a bottle of wine at a riverside bench and watching the boats putter along. The symbol of Paris is a boat.

You’ll see it on the coat of arms, government buildings, schools, and stamps. The symbol comes with the motto fluctuate nec mergitur, translated: ‘Tossed by the waves but refuses to sink.’

Add this to the fact that Pont Neuf was the first bridge whose entire surface was paved, as all the new streets of Paris soon would be, and it’s easy to see why pedestrians saw themselves for the first time as Kings of the river.’ -Joan DeJean, How Paris Became Paris

The French love bits of paper. They adore saving postcards, collecting stamps, shuffling reports, and photocopying documents. Many spend entire careers just moving papers around. Years later, these bits of paper end up in flea markets where they are sold to other French people collecting more bits of paper.

The home decor TV shows even feature big bookshelves of binders for people to neatly collect their papers. It’s either a collective love of paper or a collecting neurosis. I’m not sure which.

At this time of the year, you rethink your umbrella. Chances are you’ve been wooed by a new spring coat on display at the grand department store Galeries Lafayette, and you realize your old umbrella just won’t work with the new coat.

Today, I zipped off to Parapluies Simon, which has been in the umbrella business since 1897. Inside were vases holding bouquets of pretty parasols, shelves stocked with folding parapluies, and ladies testing the release button on various umbrellas.

In Paris, an umbrella is as important as your wallet, and you’re willing to pay big bucks for an umbrella with decent release, otherwise, you’ll find yourself battling to open said umbrella when the clouds roll in. And it rains so often that you’ll curse the day you were too cheap to invest in the better brolly.

You’ll also want a high-tech spine that doesn’t bring with the first big gust of wind, lest your umbrella joins the army of broken and bent umbrellas that crawl along the quay like an army of spiders with broken legs.”

Buy A Paris Year on Amazon.

Set your Author Custom HTML Tab Content on your Profile page
If this story has inspired you to travel, why not check out the prices to get there and make it happen? Search airfares, hotels, and rental cars here. Thanks!