Let’s Take the Kids to London 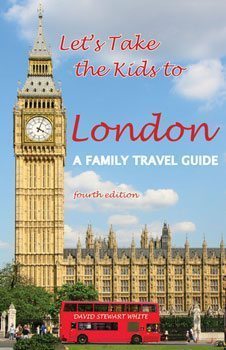 A Family Travel Guide to London -with Kids

Taking a trip to London with the kids? You have to read Let’s Take the Kids to London – A Family Travel Guide by David Stewart White. This detailed book gives you the places to visit with the family that perfectly mixes the history, culture, and entertainment London offers for both children and adults. Extremely honest accounts of the tourist attractions and hidden gems of the city are given with details on each are included, and are a must for planning out your vacation and finding a hotel in London.

Along with entertaining places to visit, the book offers useful tips on where to stay, how to get around, currency exchange, and contacting home. You’ll need this book not only to find the best family-friendly places in London but also to learn the savvy time-saving tricks and travel tips unique to the city.

The author, David Stewart White, was a frequent traveler from a young age, living in Paris and traveling throughout Europe. He learned the “art” of family travel planning as a child and has gained the qualifications to write this book by having two children and taking them to London on many occasions. Other travel articles he has written have been published in the Washington Post, Examiner.com, and AAA World Magazine. He now lives in North Carolina with his wife who also is a writer.

Fun, but perhaps a tad tacky.

London is full of historic sites, top-notch museums, and cultural icons. But not every venue falls squarely into one of these categories. The city has its share of tacky, kitschy, and low brow attractions.

Not everyone is a fan of wax museums. There’s something weird and macabre about these worlds of wax. After all, Madame Tussaud began her career by displaying the death masks of people executed during the French Revolution. Fortunately, visitors to Madame Tussaud’s have the option to skip scary parts. If you want to bypass the dripping, disgusting chamber of horrors and stick to entertainers, sports figures, and famous folks, just follow the signs.

Wax figures are lifelike, but they lack certain human qualities, such as mortality and ego, so the museum has created some combinations that would be improbable in real life. There’s nothing to prevent Michael Jackson from communing with Gandhi, or the Pope from kibitzing with Madonna.

To my knowledge, the museum has yet to display those unlikely combinations, but Madame Tussaud’s has enabled King Henry VIII together all his wives together in one room without anyone losing her head.

Elvis is here, too (guess he wasn’t abducted by space aliens after all). Children visiting from abroad will recognize many of the figures in the Wax Museum, but perhaps not every British football star or political figure.

Wax Museum visitors can climb into the shell of a London taxi and take a brief ride highlighting the history of the city. In a couple of minutes, you are whisked past the great fire, the building of St. Paul’s, the Victorian era, the Blitz, and back to present-day London. Good news – no taxi driver, so no tip required.

Madame Tussaud’s is one of the most visited attractions in England. Lines to get in are often long, but they move fairly fast. Because it is more than 200 years old, Madame Tussaud’s almost qualifies as a historic site itself, albeit a very commercial one. But consider for a moment: what does a wax figure of Elvis have to do with a visit to London?

Parents traveling with young children should be aware of this phenomenon; some exhibits, especially wax museums, dungeons, and the like, are designed to frighten the daylights out of most kids and many adults. Madame Tussaud’s is an offender; the London Dungeon is the worst.

To give you an idea of just how perverse the London Dungeon is, here’s a description taken from a visitor’s guide:
“Exhibition depicting the darker side of British Medieval History, Death, Torture, Damnation, and Disease. The dark, slimy vaults contain Trials by Ordeal, History of Capital Punishment and the Tortures used in the Tower of London…

A major attraction is The Jack the Ripper Experience – a 20 min multi-media exhibition throughout the year. Also on display are the “headcrushers” from France and the Spanish “garrotters.”

Need I say more? To see real dungeons, head for the Tower of London.

And although they’re not designed to scare, a number of other London exhibits and commercial museums employ live costumed actors who liven up their jobs by standing mannequin-still, then suddenly springing to life. Be aware of this practice – and make sure the kids visit the restroom before entering these exhibits.

Go to the Theater

London’s West End offers a vast array of shows, but finding something appropriate for younger children can be a challenge. Musicals are often a good bet if you choose wisely: Mary Poppins, not Chicago; The Lion King, not King Lear. (OK, King Lear isn’t a musical, but you get the idea.)

A great resource for choosing shows is the Internet. The Society of London Theatre’s website, www.officiallondontheatre.co.uk is, as the name implies, the “official” guide to the London Theater. The society also operates the legitimate half-price ticket booth in Leicester Square. The commercial site www.whatsonstage.com has listings for performing arts events throughout Britain. Users can search for events by location, date, or type of performance.

Both websites include theater reviews, seating charts, and a way to order tickets, albeit with hefty booking fees. The British branch of Ticketmaster provides a similar online service. After arriving in London, visitors can pick up copies of the printed version of This Is London and other guides like Time Out London for information on theaters.

After the theater, walk back to your hotel in London instead of taking the tube, enjoy the nighttime ambiance of this great city!

Most of London’s major theaters are located in the West End theater district close to Piccadilly Circus or Leicester Square; there’s another grouping in Covent Garden area.

Because London’s museums and tourist attractions usually close by 6:00 p.m., an evening theater performance works well for many visitors. As a bonus, the theater is a chance to sit down after walking all day. Those who don’t mind walking a bit can use the Tube to get to most theaters, but a taxi will drop you right at the lobby door.

Hailing a taxi after the performance can be a challenge because all shows end at about the same time and competition for taxis is fierce. The area around Leicester Square, including the Tube stop, is often very crowded with a mixture of theater patrons and a slightly rowdy bar crowd on Friday and Saturday nights, so extra vigilance is advisable when traveling with children.

Hannah Monahan is a former editorial assistant at GoNOMAD who now lives in Boston where she works in food service sales.