Lionfish are the Worst Fish in the Sea, and Divers Try to Kill Them for Dinner

It was only after I learned that the stomach of the lionfish could expand up to thirty times its original size that I had a clear vision of the Apocalypse.

When the world ended only two animals would survive, the tenacious cockroach (one of which had recently survived a dive to 90 feet for 45 minutes and then happily scampered out of my dive bootie onto the deck of the boat) and the voracious lionfish.

When I arrived in Utila, an island off of Honduras to begin my divemaster training, all I knew about lionfish is that they were an invasive species with a fan of stunning but venomous spines.

However, that all changed when I met Andrzej Narozanski of the Utila Centre for Marine Ecology. Narozanski, who coordinates the Utila Lionfish and Capture Program, has been tracking the population and distribution of lionfish since they arrived in Utila in April of 2009. He regularly gives presentations at the fifteen dive centers on the island.

Not a Native Fish

While lionfish in their native habitat have predators and reproduce only once a year, lionfish in the Caribbean breed all seasons of the year (roughly every four days) producing 30,000 eggs at a time. In addition, larvae drift below the ocean surface for 25-40 days, quickly spreading lionfish populations to virgin habitats.

Devouring All of the Other Fish

For example, lionfish were first spotted in the Bahamas in 2004, and now there are 390+ per hectare. Unchecked, lionfish devour all fish in a given area and can reduce the biomass of their prey by 40-90% in less than four years.

In addition, in Utila they are now colonizing mangroves and seagrass, which serve as nurseries for reef fish. This poses a substantial threat to the future of reefs around the Caribbean.

To combat this problem Narozanski began working with the Honduran government to pass a law allowing divers to use spears to kill lionfish. The law was passed in March of 2010, and since then dive operations on the island have encouraged divemasters in training, divemasters, and dive instructors to spear lionfish with Hawaiian slings.

All spears are registered so as to prevent the use of spears to catch protected species. According to Narozanski, “we need to be the main predator of lionfish.”

He recently authored a responsible seafood guide for the Bay Islands, and in it, he encourages visitors to eat lionfish and other invasive species. By becoming invasivores, visitors and divers can, to an extent, eat the reef healthy.

Although it takes a fair amount of work to clean the spines off the lionfish, their flesh is tender and tasty. At the dive shop where I completed my training, divemasters would often clean and fry lionfish for lunch or dinner.

On a typical day Narozanski, who is the only member of the Utila Center for Marine ecology who works with the lionfish prevention program, completes several dives and fish surveys. As he described, “A single fish survey takes about 15 minutes, and the rest of the dive I’ll swim around and look for lionfish.”

In addition, he is collecting and analyzing data about lionfish distribution in Utila. He works with local diver centers to collect data, and when he gives lionfish presentations he asks divemasters and instructors to keep track of the location, number, and size of lionfish at specific dive sites around the island.

Teaching Other Fish to Kill Lionfish

In the process of spearing fish, Narozanski discovered that several native species of fish could essentially be taught to become predators of lionfish.

For example, snapper, grouper, and queen triggerfish are now so accustomed to divers spearing lionfish, that they will often follow divers around waiting for a free meal.

“Queen triggerfish also eat urchins, so I think they’ve got an idea of how to deal with the spines,” explained Narozanski. While out spearing lionfish he also discovered that moray eels and spotted eels eat speared lionfish. These fish and eels appear to be learning how to eat the lionfish without getting poisoned by its venomous spines.

According to Narozanski, “We have a report of a queen triggerfish hunting, catching, and eating a live lionfish.” This provides some hope that local populations of fish can be trained to become predators of lionfish.

Given that all lionfish populations in the Caribbean originate from a small gene pool, Narozanski also believes that a weak gene pool could eventually make lionfish susceptible to disease. The weak gene pool is also evident in lionfish behavior. For example, the first time I went lionfish hunting, I threw my spear directly at the lionfish three times while it floated calmly in front of me.

After the third attempt, it finally swam into a cave. Although it takes some practice to become effective at using the spear, the lionfish is a generally sluggish target. On my second attempt at spearing a lionfish, I descended with a group of divemasters, and a queen triggerfish and a grouper immediately followed us.

Due to the success of the program in controlling lionfish populations, other islands are following suit. For example, the Cayman Islands recently began using Hawaiian slings to hunt lionfish.

When I asked Narozanski about the potential success of the program in five to ten years he replied, “It’s quite difficult to predict. In the presentation that I gave you, I used the Bahamas as the case study of what can really go wrong if you don’t put a lot of effort into trying to control them. However, the more I speak to people in the community who take part in this program, they say that they’re seeing fewer lionfish and that they are smaller.”

In an effort to get all dive operations involved in lionfish control and to promote education and awareness, Narozanski organized the first biennial Utila Lionfish Derby that took place in 2011.

Local dive shops competed as teams to see who could catch the most lionfish. Of course, the derby ended in a lionfish feast, a celebration in which locals and divers ate their reef healthy.

Delta Airlines has a flight out of New York City that stops in Atlanta and arrives in San Pedro Sula roughly seven hours later. Charter flights from San Pedro Sula to Utila cost around $100 and are available most days of the week through Atlantic Airlines or Aerolineas Sosa.

There are fifteen dive operations on the island, although the most famous is Utila Dive Center(504-425-3327, ), which was voted the best PADI dive center in the world. Cross Creek Dive Center (504-425-3397, ), which is owned by Utila Dive Center, offers free simple accommodation and the added bonus that divemasters certified there dive free for life.

The Aggressor is a liveaboard that offers seven-day diving vacations (706-993-2531,). Open Water Certification costs between $275-$300 at most of the dive shops on the island, making Utila one of the cheapest places in the world to become a certified diver.

The remote Utopia Dive Village (504-3344-9387, ), perhaps the most luxurious place to stay on the island, is a twenty-minute boat ride from town and has rates beginning at $224 a night. The resort offers a spa, yoga, and diving. Backpackers often stay in the more affordable Mango Inn (504-2425-3305, )   Mango Inn also has a swimming pool and a restaurant that is famous for its pizza.

For those wishing to stay for several months, renting an apartment is an excellent option, and a listing can be found at About Utila.

Fighting Lionfish in Other Places

Many other shoreline communities have developed Lionfish derbies to fight the scourge.

The following dates and locations have been set for REEF’s 2020 Lionfish Derby Series: 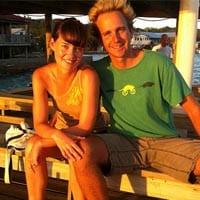