Kutná Hora and Malešov in the Central Bohemia Region: The Area Around Prague

Prague gets most of the bright light attention in the Czech Republic. It is one of those places that people really remember, and recall fondly.

I wanted to experience this great capital, but sadly, my visit consisted of merely a 45-minute Uber ride to a remote part of the city far away from the famous bridge and the charm of downtown Prague.

But before this short Prague encounter, I was in Central Bohemia, and it’s an interesting and fun destination to visit with a lot to see.

Like so many capital cities in small nations, Prague is right in the middle but Central Bohemia is the area that encircles Prague.

Kutná Hora, Kolin, and Malešov were where we would lodge in a comfortable hotel and in our own tents next to a man’s personal castle home.

Everywhere we turned, there was an interesting example of architecture, and there was no litter or graffiti marring the view. (Thank god!  Having come from a previous visit to Santiago, Chile,  where no building avoids the scourge of the graffiti scar!).

The trains in the Czech Republic are run by Ceske Drahy, and feature very long dinner and lunch menus full of tempting entrees.

I was just about to order a fish dinner when we arrived at our stop, Kolin, where we’d disembark in the rain and make a break for a cozy wood-paneled restaurant with a long narrow dining room and hearty repast being served. The roast duck with the caramelized cherry sauce I saw on the train menu would have to be for another day!

There is much consistency in the menu choices I found during my travels in Central Bohemia Czech Republic.

The clear bouillon broth soup with dumplings appears just about everywhere, with variations for the dumplings but always that clear broth.

Rabbit, venison, and duck are very common menu features.  Soup is always the starter, and often you can choose between the broth version or a mushroom soup.  Often pig neck, beef cheeks or other interesting meats were featured.

Mushrooms find their way into many, many dishes here, along with potatoes.

We got a chance for a 360-degree view of the countryside when we stopped at a restaurant in Kutna Hora near the train station with its own brick tower, leading to a treetop-level circular cafe with dramatic picture window views.

The Kank look-out tower is a great place for a coffee after lunch with a view of the woods and distant buildings of the UNESCO World Heritage site town.

The small town of Kutná Hora is one of the most scenic in the whole country, with preserved brick buildings, cobblestone sidewalks, and a striking cathedral with slender towers that really stands out.

For our stay, we chose the Hotel Medinek, right in the main square, which provides comfortable rooms with views of the square.

As we unpacked in our hotel, I didn’t realize where we would be going at night fell.

After a stellar meal at a local restaurant, V Ruthardce, in town, we ventured a few towns over to Sedlec, and there we took the nighttime tour of the ossuary in the basement of a small chapel.

The Ossuary consists of artwork, ornate designs, chandeliers, and railings all made with human skulls and bones of every size.

READ ABOUT VISITING THE SEDLEC OSSUARY

I didn’t realize but this town had a character in its history that we’ve been singing about every Christmas my whole–good king Wenceslas.

The Italian Court in Kutná Hora

But the carol is not about this Wenceslas, it’s the different King who ruled Bohemia 300 years earlier.

He made this town famous for the mint where they forged local currency.

In the museum, part of the Italian Court in Kutna Hora, we viewed many of their coins along with many other relics of the long history of monarchs. This was the seat of power in all of Bohemia before the era of Prague.

The ornate building is rectangular and the tour takes you all around it with so many intriguing stops along the way.

It really can’t be overstated how picturesque the small town of Kutna Hora is, with all of the original buildings intact, no ugly modern signage, and the ornate cathedral and Italian court. 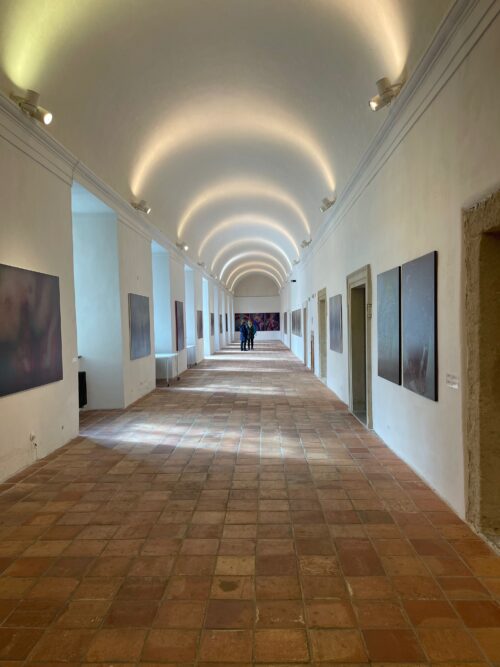 Another marvelous attraction here is a massive building that was built as a Jesuit college and in 2009 became an art museum—at a very large scale. Paintings that were stored for decades in Prague were brought here and the Gallery of the Central Bohemian Region, or GASK was created.

On a tour of the GASK, we met Mr. Richard Drury, the Head of the Art Department. He is an art critic and art historian, and a university teacher from Scarborough, North Yorkshire, England.

He’s been living in the Czech Republic since 1991.   He explained that the building was also once a Museum of Agriculture until 1995.

You can spend a lot of time in the myriad number of exhibitions and modern art here at GASK.

Another attraction that’s a step back in time is the Medieval Letterpress atelier in town. Here we watched a press operator work the press that was made in Boston in 1885 into custom-printed cards.

He even embossed the cards with a seal at the Museum of Letterpress.  There are exhibits about the history of printing here and you can see the whole process in front of you. Fun!

Sleeping Near One Man’s Castle

In the nearby village of Malesov, we met Ondřej Slačálek, a family man who keeps quite busy with the ongoing restoration of his 14th-century castle,  the brewery, and the glamping tent hotel he runs here. Ondřej said his castle has been an ongoing labor of love, with between $1 to 2 million spent over the past 15 years on repairs, maintenance, and improvements.

Escape Rooms and Cosplay in the Castle

There are many, many people, both Czechs and tourists who are keen on renting the castle for weddings and for cosplay events.  Re-enactors and many others join seasonal experiences combining Escape Room, cosplay, and immersive theater three times a year here.

Visitors to Malesov can bed down in the glamping tents, arranged side by side in the back yard, that offer toilets, sinks, electric plugs, and especially valuable, heaters for the colder months.

I slept quite well in my little tent, but I was glad to be able to join the crew in the comfortable hostel lounge, where a fire and local hot food and coffee warmed everything up.  Glamping website.

The Town of Kolin

In the town of Kolin, there is a magnificent town square that is used as a market.

One distinctive element here can be found on the sidewalks. To memorialize and never forget the local victims of the Nazis during WWII, bronze plaques are embedded in places around Kolin that identify local citizens who were taken away and killed during the war. You’ll find the same plaques in other towns in Bohemia.

In Kolin’s St Bartholomew’s church, we climbed up the stairs inside the steeple to the top, where were treated to the view of the orange roofs of the well-preserved town.  And here we learned that there are more than 100 ossuaries scattered all around the country.

The ossuary here is a bit smaller than the one we toured in Sedlec, and it wasn’t as dramatic as seeing the bones lit up at night.

While Prague indeed might be the biggest draw in all of the Czech Republic, and deservedly so, I was very impressed with how much there was to see, do and learn about in this interesting area, Central Bohemia, the ring around Prague.

This trip was sponsored by Visit Central Bohemia Tourism, but the opinions are the author’s own. 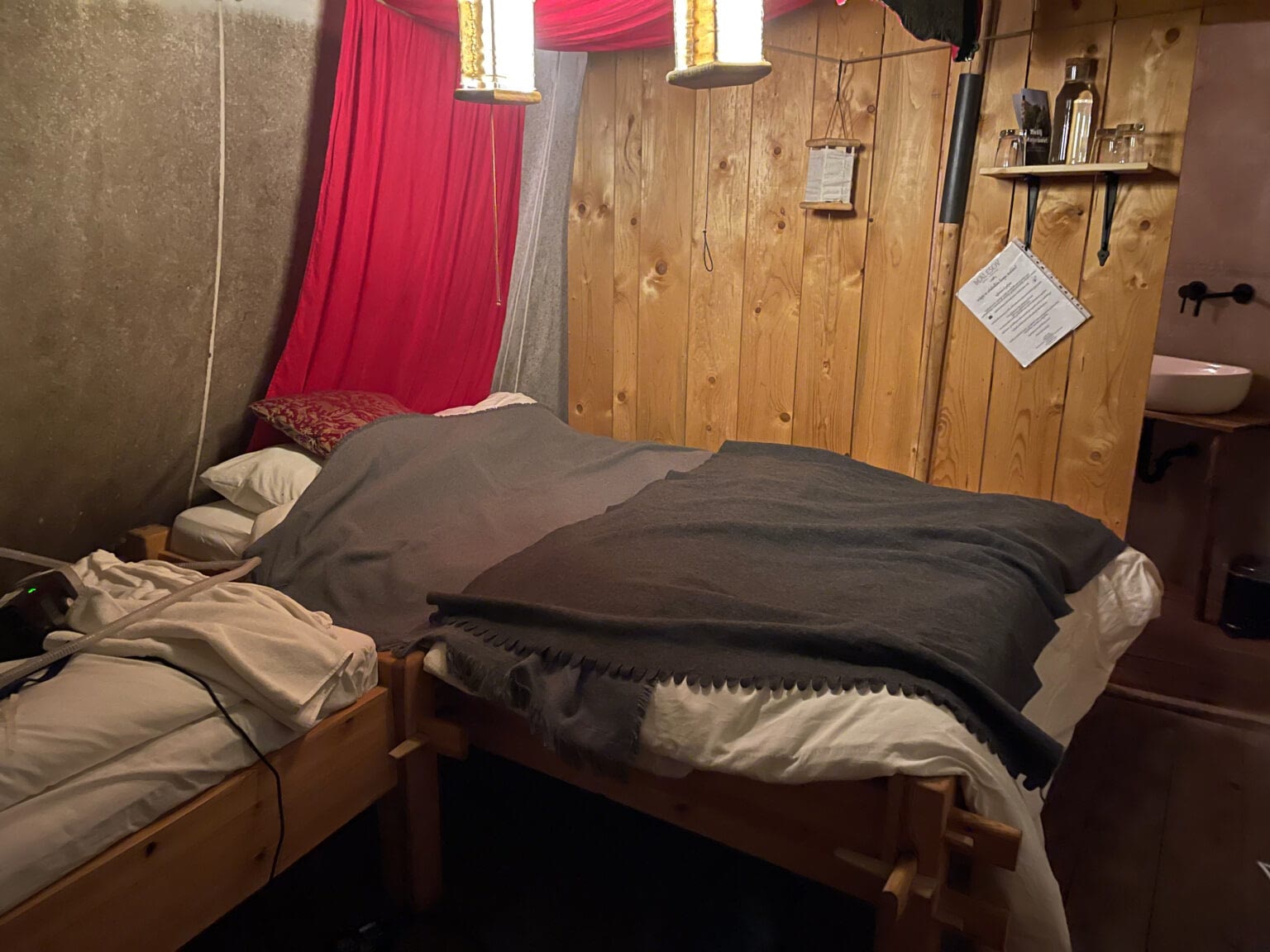 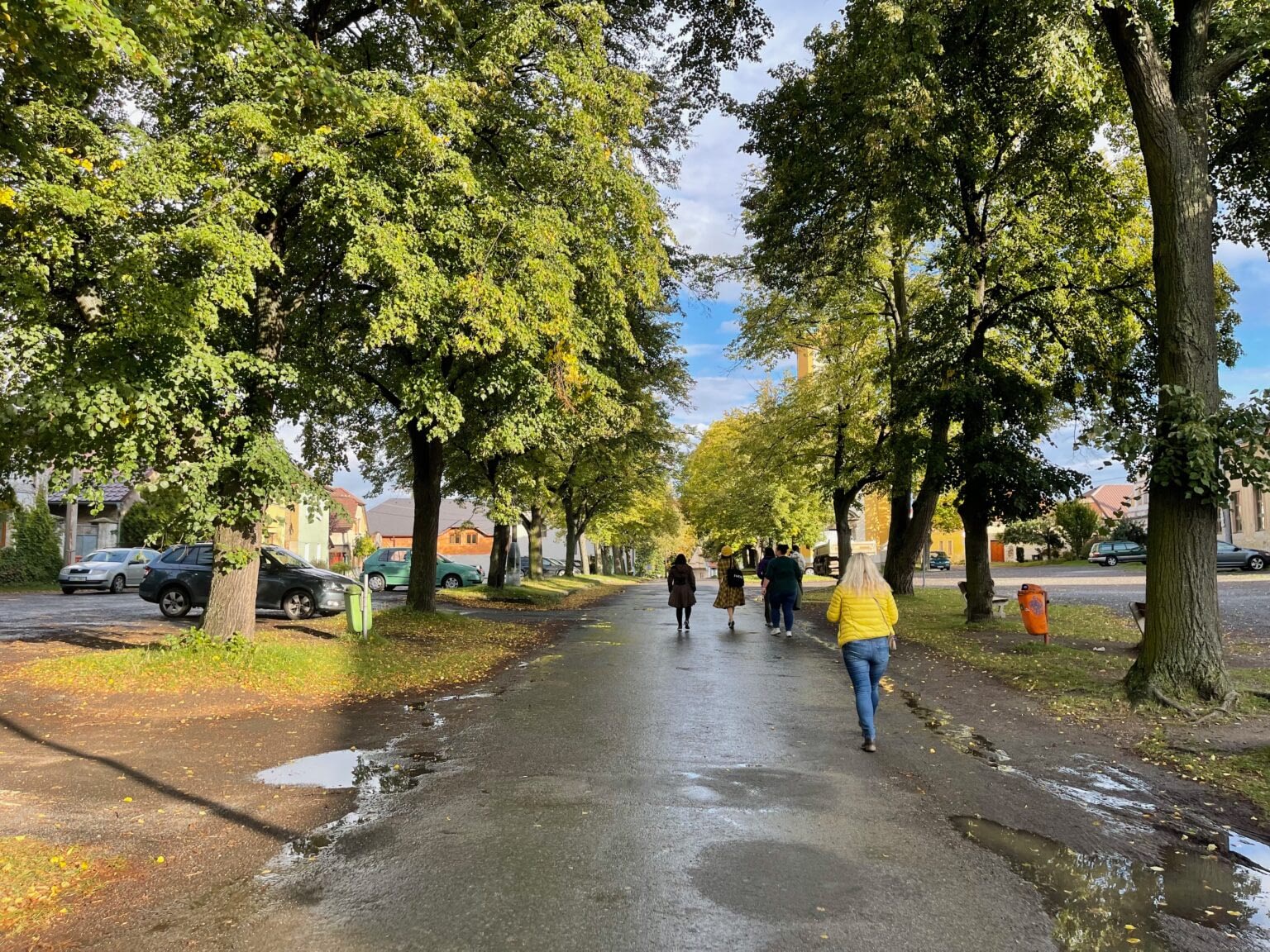 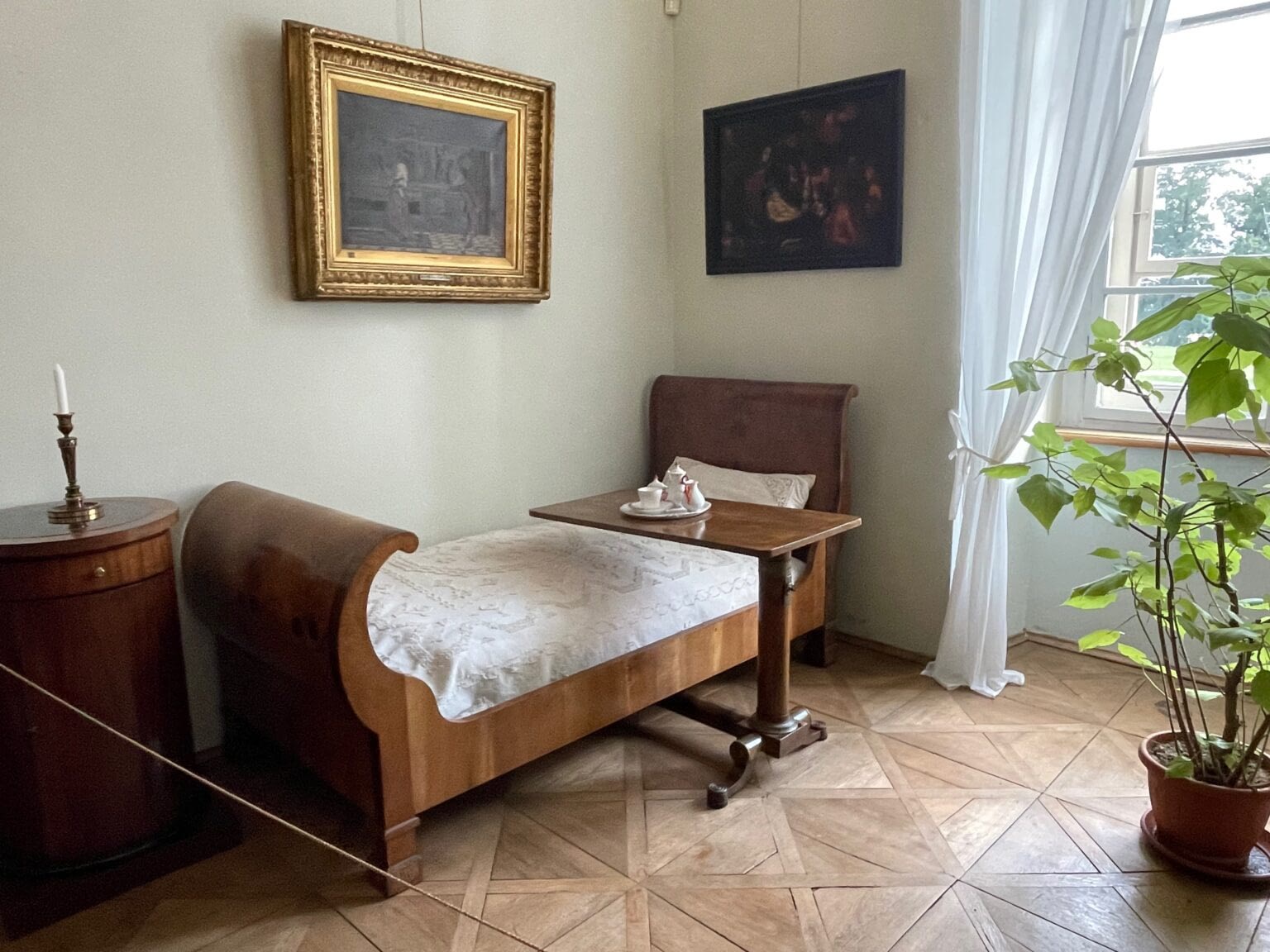 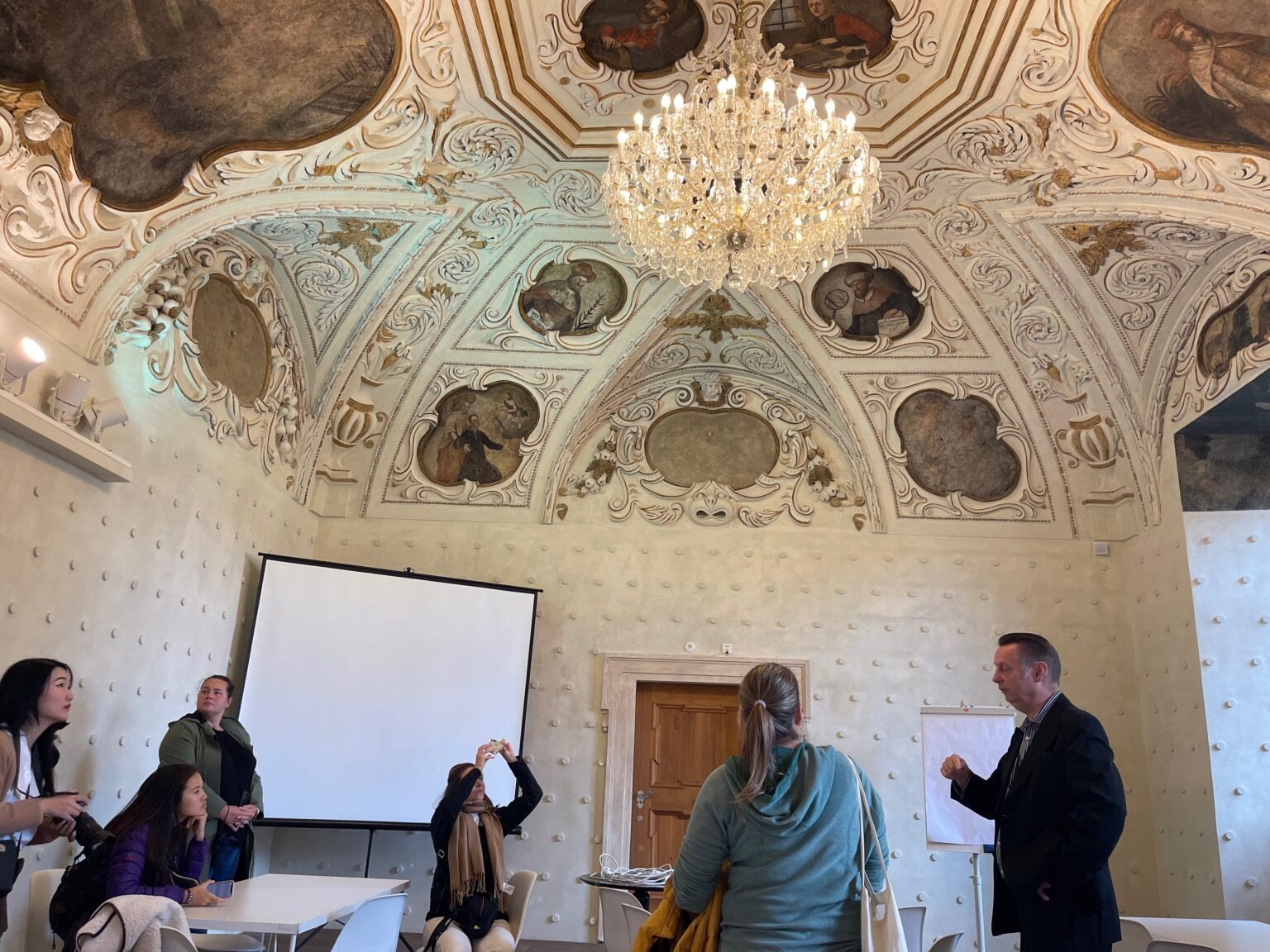 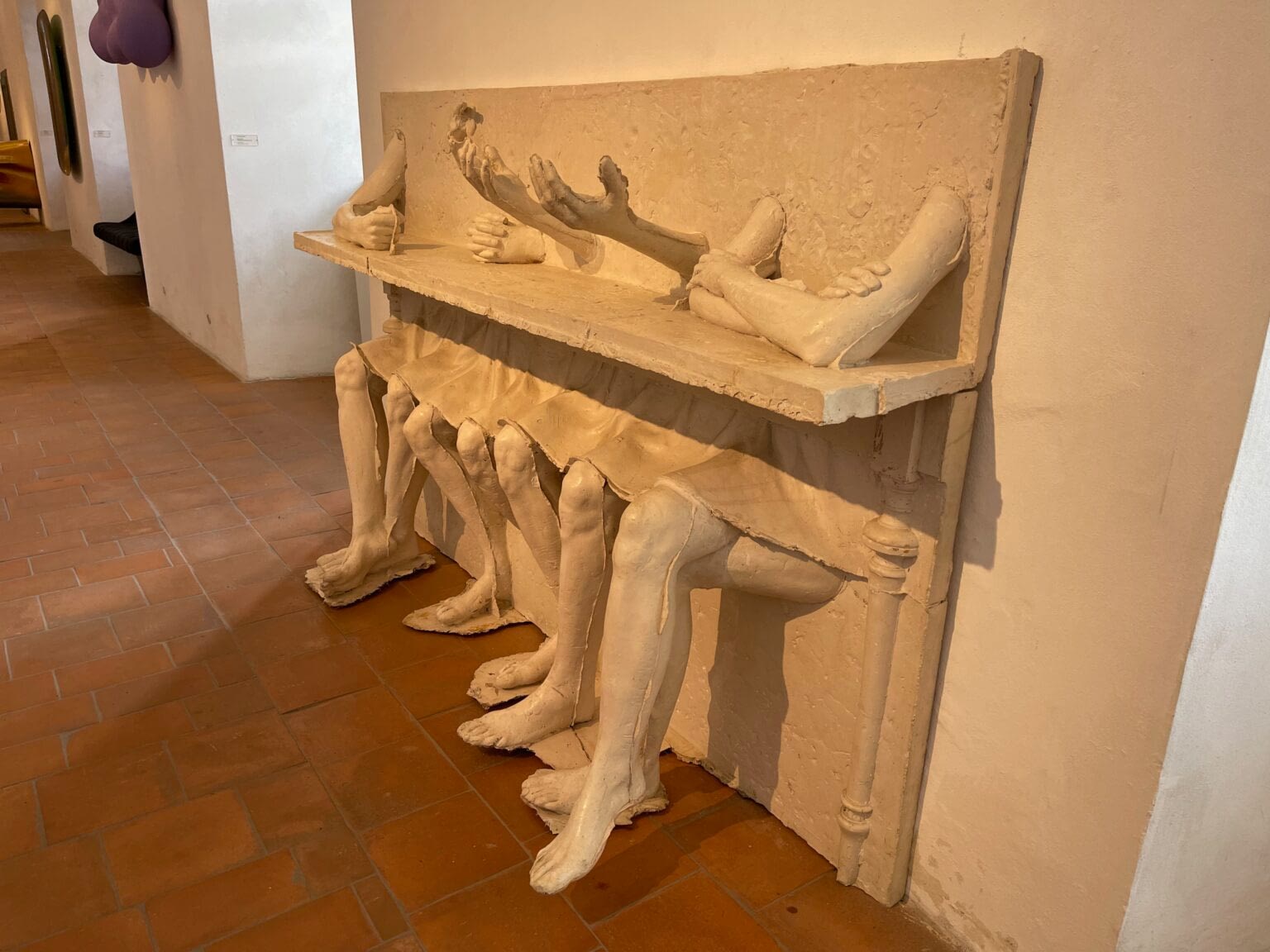 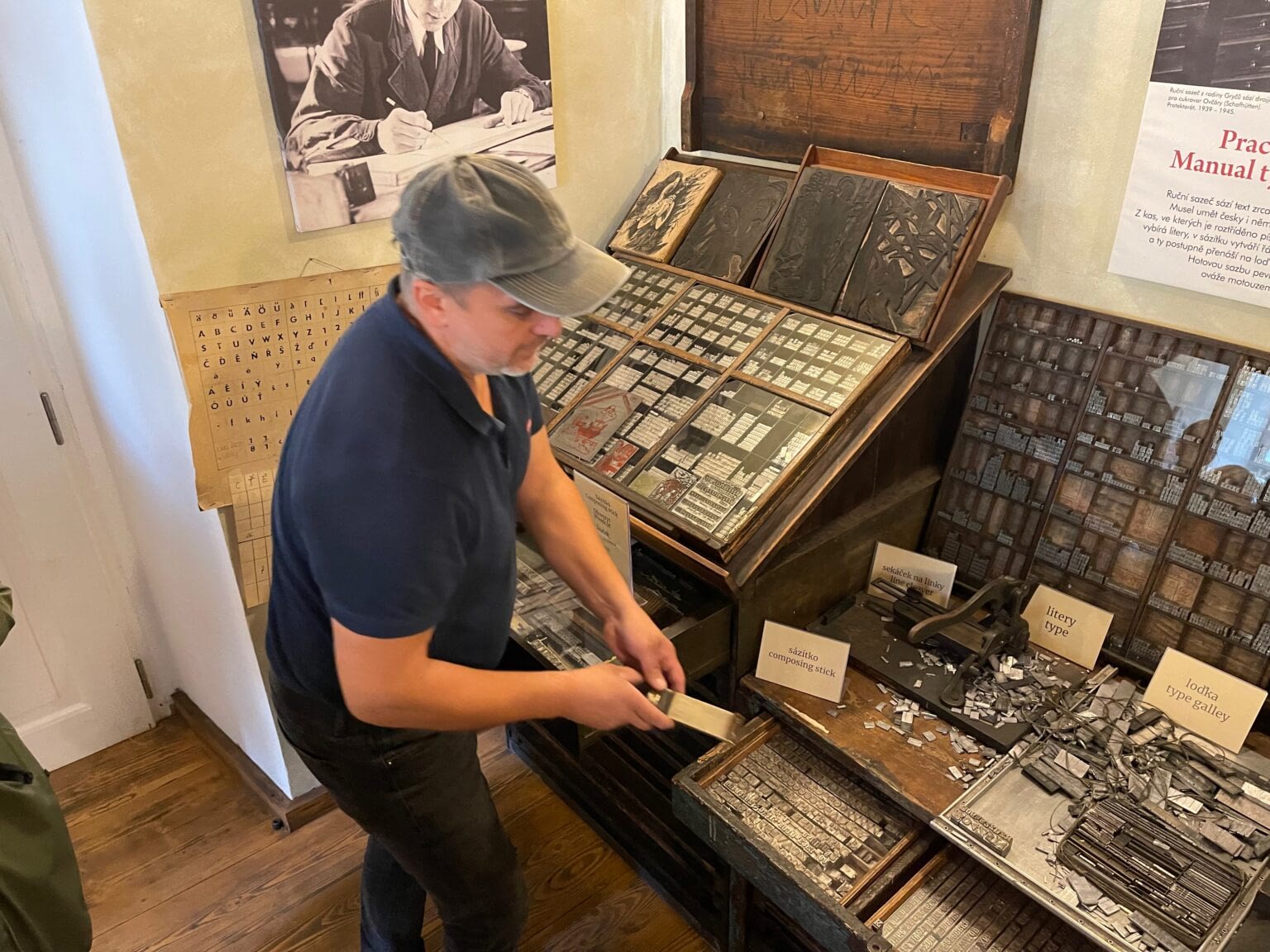 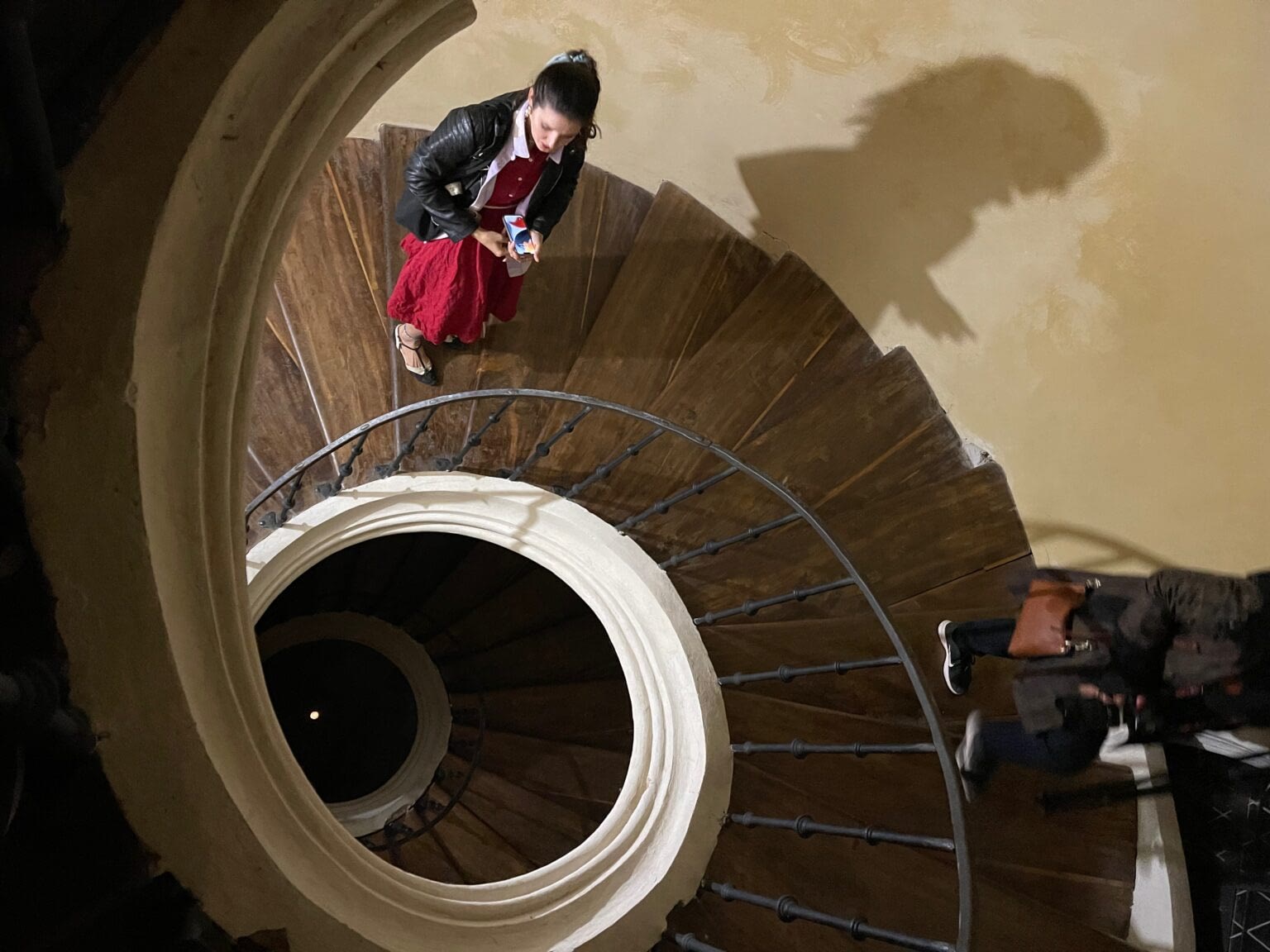 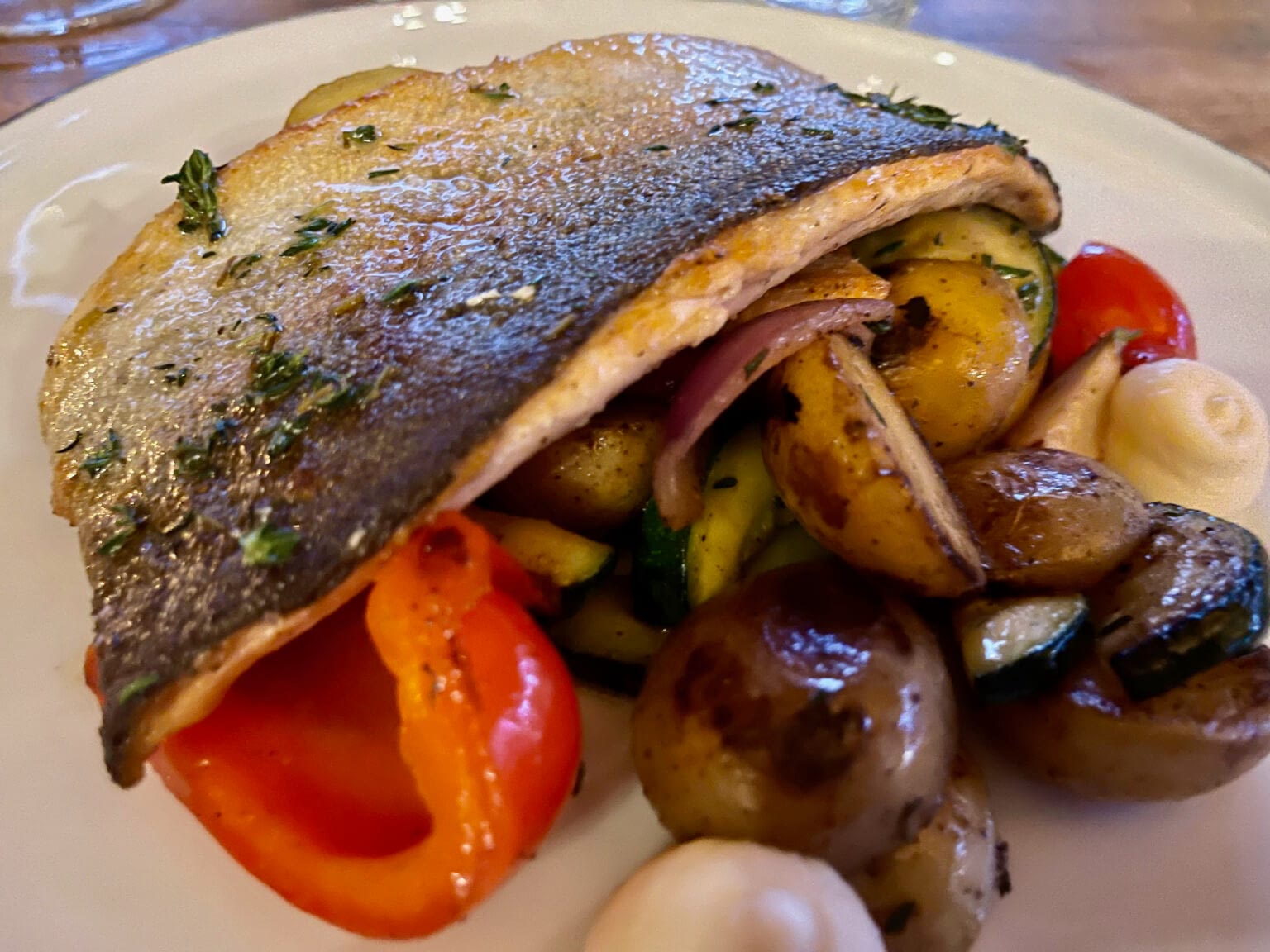 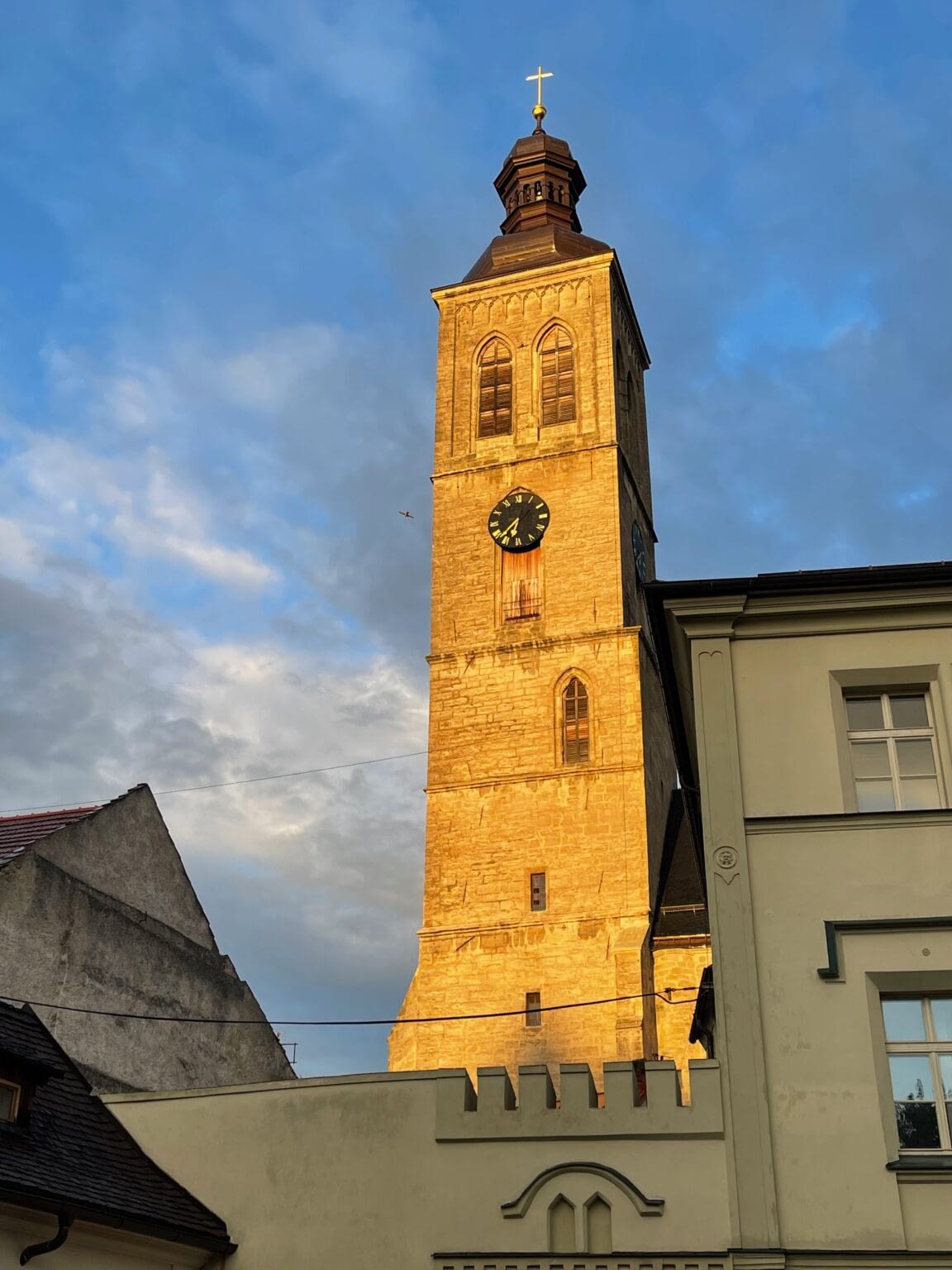 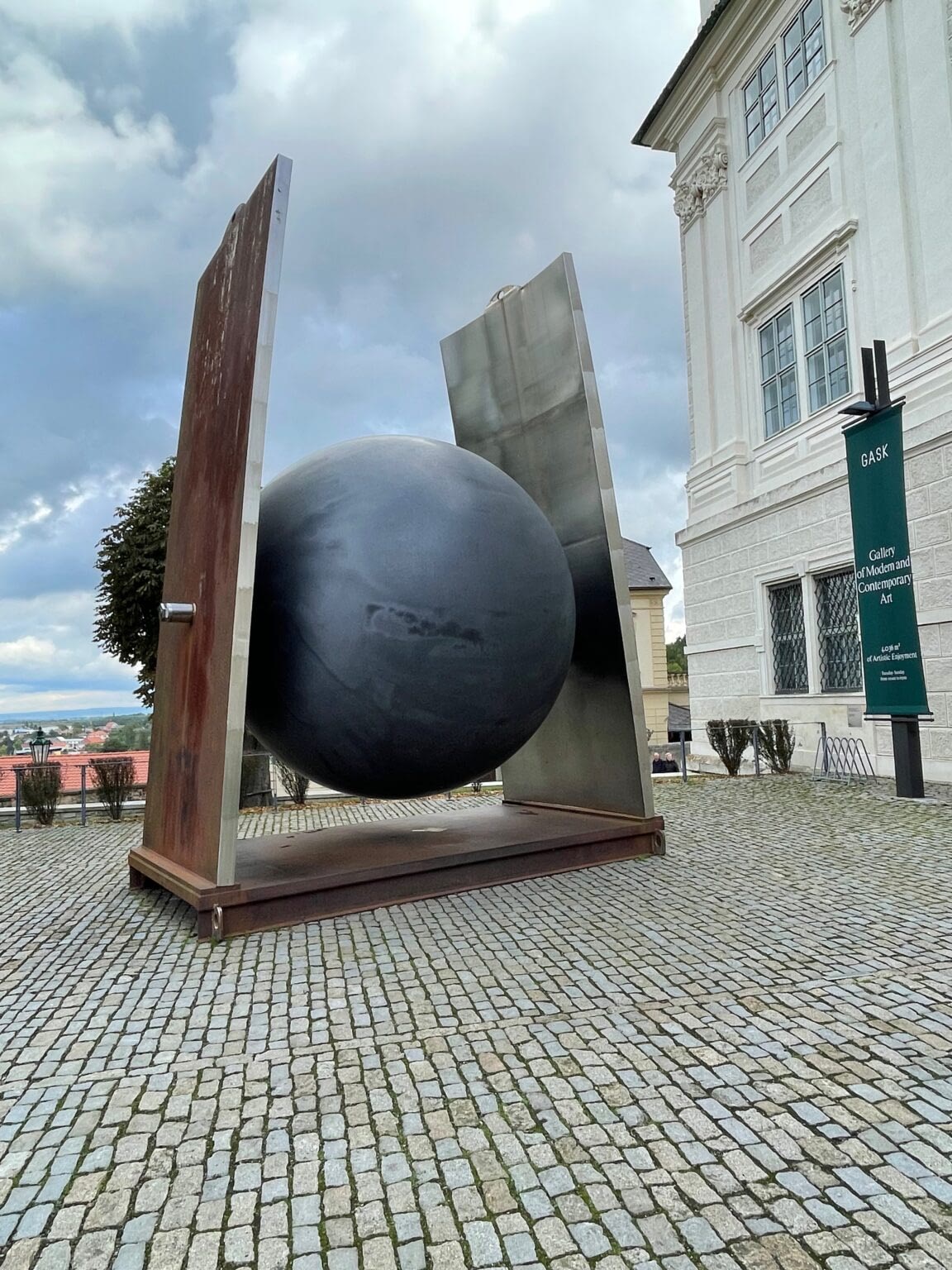 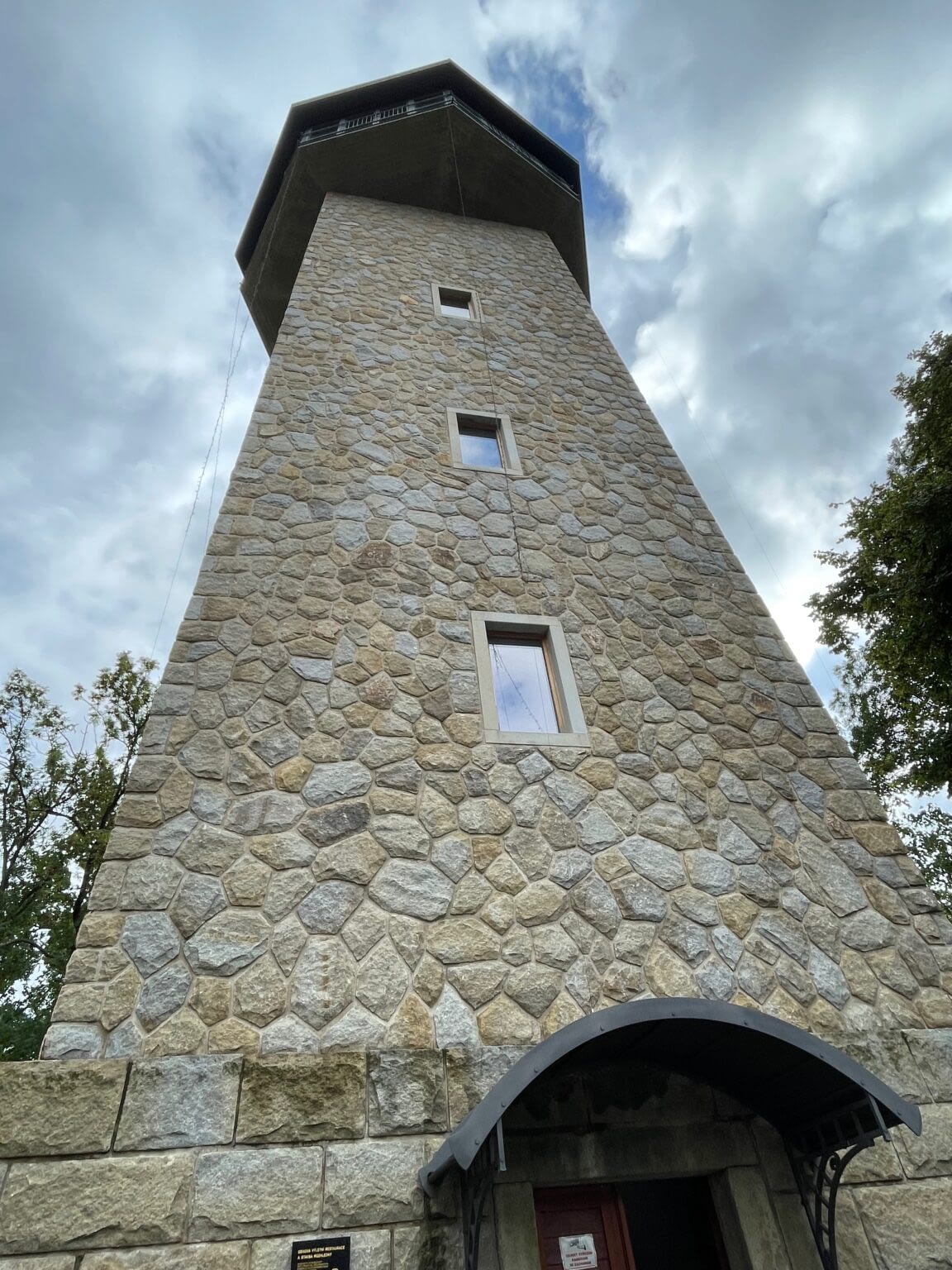 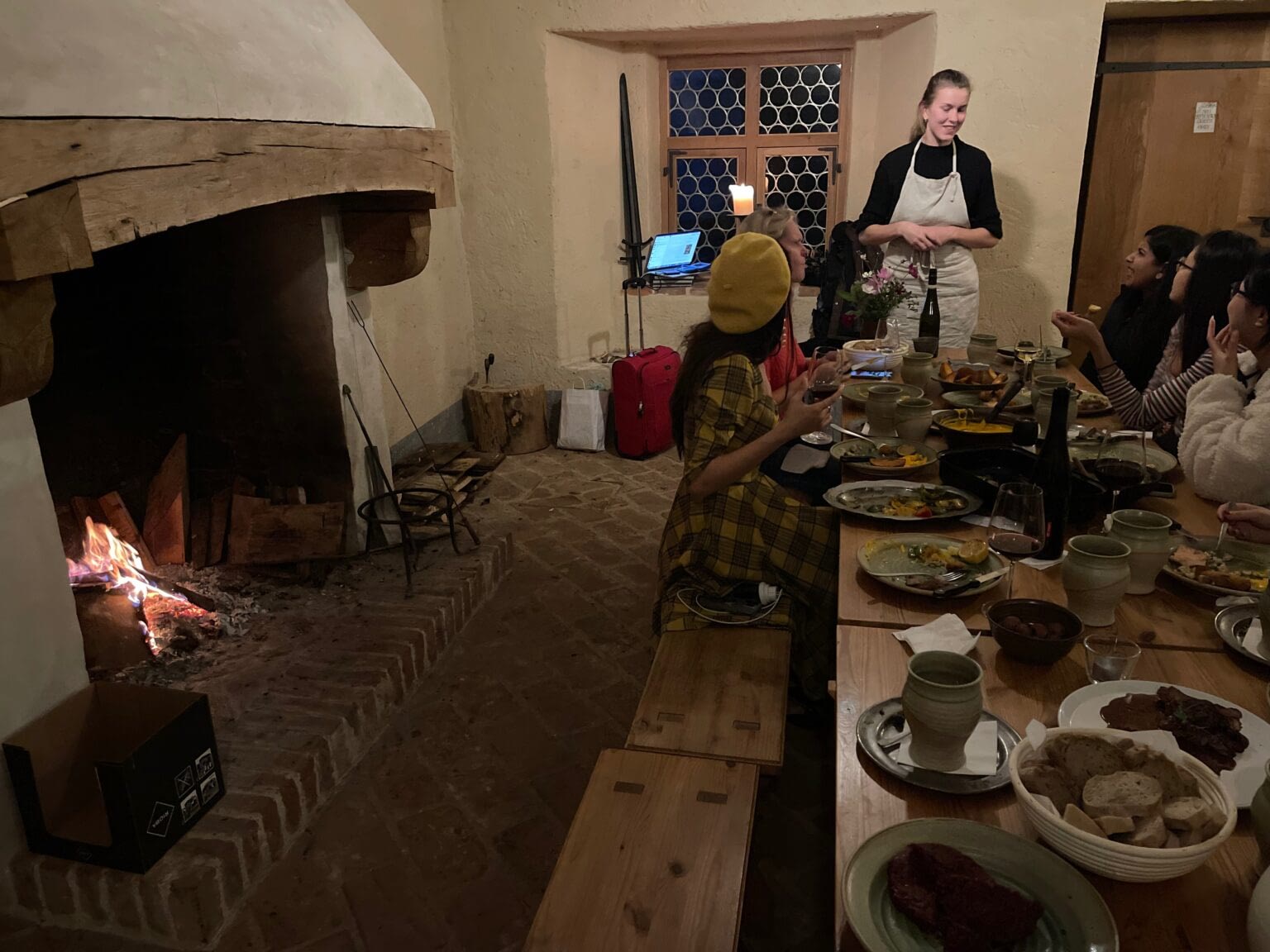 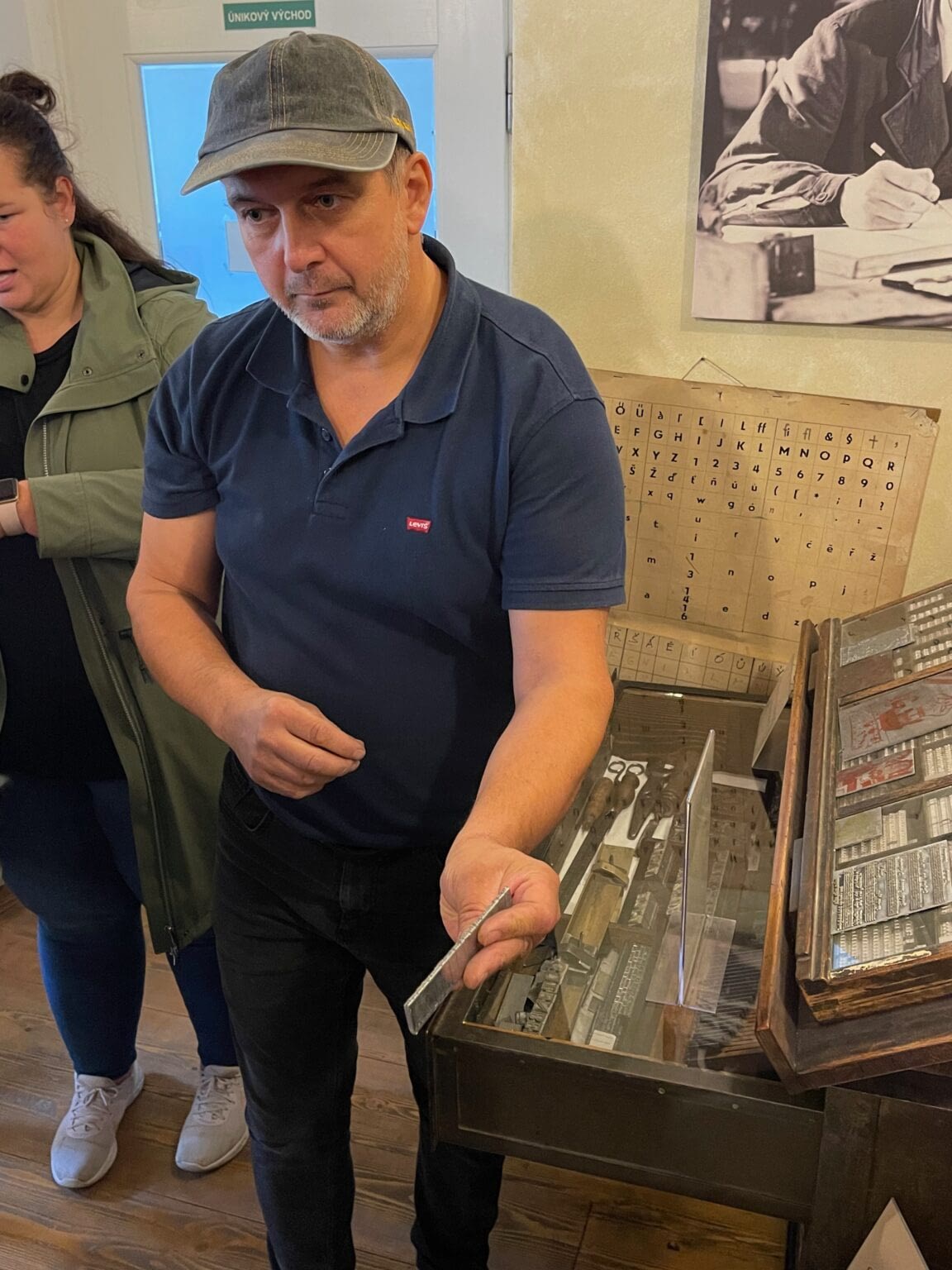