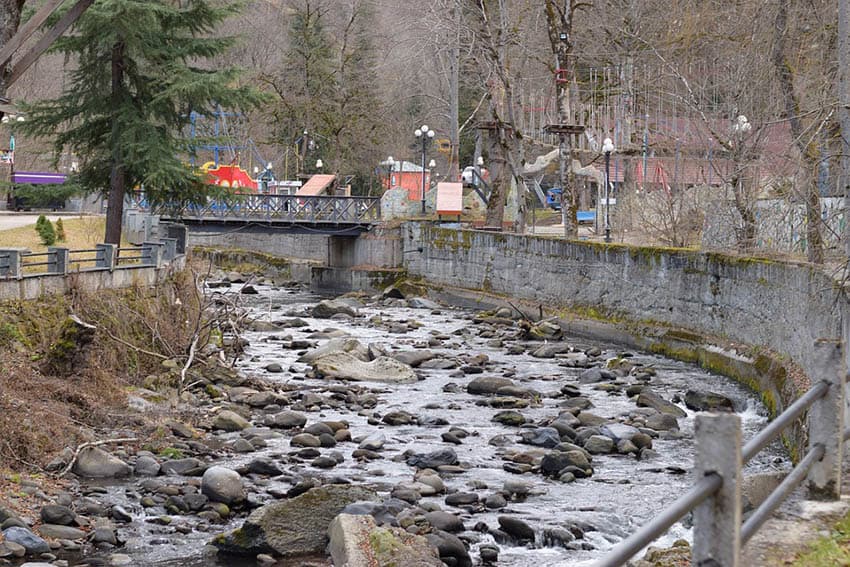 “You have to taste the mineral water!”

“You absolutely must try the mineral water, unlike anything!”

“The mineral water of Borjomi was world famous.”

“Will, you try the mineral water?” said the 500th person since I had been in the country of Georgia.

Whenever the town Borjomi came up in conversation, this was inevitably where the conversation would turn despite my best efforts. Borjomi is a small town in central Georgia that seems to function as an oasis of natural beauty.

The Tsars had hunting grounds and opulent mansions nestled in the forests. Stalin was claimed to have loved the mineral water which bubbled from its natural springs. The town was filled with old resorts and sanitoriums reserved for Soviet apparatchiks.

Initially, Borjomi had not even been on my itinerary for the South Caucasus nation but after hearing about the damn mineral water for the 140,395th time, I decided to give it a shot. Into the nature playground of the Tsars I would venture.

Yellowstone of Georgia (The country, not the state)

In order to get to Borjomi, one simply needed to follow the highway west out of Tbilisi for about three hours. The rolling green hills and fertile valleys of this region included Gori just to the South, where the future Stalin would spend his childhood years.

Just to the north of the highway lay the refugee camps caused by Russia’s annexation of South Ossetia (a name which does not even exist according to Georgians).

“Pretty soon, the hills will disappear, and you will see nothing but forest. Then we are in Borjomi”, my guide said as we drove past Gori.

I had certainly seen my fair share of vineyards, crop valleys, and hills in Georgia so a dense forest sounded like a much-needed change of views.

Shortly after this, my guide’s geographic premonition came true and suddenly the road became flanked by rows of trees. “Here we are”, he remarked.

The town’s natural beauty had certainly not been overestimated by the Georgians I had spoken too.

The flowing river and lush green trees made me feel like I was a back in the States in a National Park. A “Yellowstone in Georgia”, if you will.

However, it was still to be determined whether-or-not the mineral water would live up to the praise.

The Church in the Woods

Our first stop in Borjomi was a small orthodox monastery nestled into a cave off the forest path.

On our hike through the forest, we ran into a park ranger that struck me as an exact replica of the one’s you would see in the States.

The only major difference being this one had a 12-gauge shotgun strapped to his back and a machete on his belt.

Luckily, the shotgun and machete stayed holstered, and he was happy to point out the cave in the valley wall that housed the small orthodox church. The hike was not difficult and before long we were in the cave.

The monastery’s most beautiful feature was a small creek flowing through the cave right next to the makeshift altar. Candles nestled in various cracks along the cave wall gave both a serene and eerie impression.

The orthodox-style painting of Jesus was faintly illuminated by the candles and for a brief second, I got an uncanny feeling that maybe some other world travelers are familiar with.

Where He Shouldn’t Be

There are a few places in the world I have been where I got the faint feeling that I was somewhere I wasn’t supposed to be.

Nobody told me not to be there, there wasn’t any no-entry sign, just one of those faint feelings in your gut quietly saying that you as an outside are not supposed to be here. The cave monastery in Borjomi was one of those places.

After a few minutes of looking around. I attempted to take some pictures. A local walked up to me, gently placed his arm on my shoulder, shook his head, and in broken English said, “no pictures.” Out of a sense of respect, I heeded his word, and we headed back down to the forest path.

During the Soviet period in Georgia, Borjomi had acted as a sort of upper-class retreat.

The upper class in the U.S.S.R. primarily consisted of party functionaries/state bureaucrats and this was exactly the demographic that Borjomi was meant to serve. Massive Soviet-style concrete buildings lined the river.

Sanitariums, hotels, and apartments are all meant to serve the classless utopia’s upper class. Anymore familiar with Soviet-style amusement parks would feel right at home in Borjomi.

Broken down carousels, playgrounds that look like they’re from a Stephen King book, and of course a decrepit Ferris wheel are all present in Borjomi.

Walking through Borjomi is an absolute study in contrasts. You are both in an oasis of natural beauty and a construction of Soviet idealism, concrete and all.

House of Tsars (And Stalin)

One of Borjomi’s most interesting features was unfortunately almost completely inaccessible to visitors when I was in Georgia.

The nineteenth-century palace was under restoration at my time of visit but now, the palace is open to visitations from Romanov history buffs.

The Likani Palace, was completed in 1895 as a vacation home for Tsar Nicholas II in the dense woods just outside of Borjomi.

The palace houses an armchair from the Shah of Iran, a table gifted to the Romanovs by the French Emperor Napoleon, a table made of walnut tree roots built personally by Peter the Great, and a billiard table where the Romanovs personally played pool.

One of the offices in Likani palace should be specially noted. In the room are two nails mounted on the wall hammered in by none other than the Georgian Joseph Stalin himself.

The nails functioned as hangers for Stalin’s cap and coat. The Soviet dictator would use the Romanov’s lodge as a summer retreat and his office of choice was that previously used by Grand Duke Nikolai Mikhailovich.

One of the palace’s most unique features is a parrot statue near the entrance that changes direction based on the wind, following visitors with its gaze as they enter the grounds.

Missing Likani Palace is one of my biggest regrets for my Georgia trip, but I was able to get a scoop on the palace’s working from the writings of other travelers and more importantly, from my guide’s cousin who was currently working on the palace’s restoration.

Anyone who plans to visit Borjomi cannot miss the Likani Palace.

Town of Artisans and Mineral Water

The actual town of Borjomi and more notably, it’s town square, are quite small. The attractions of notice in this area are a few museums detailing the town’s famed mineral water springs and various artisan shops.

The artisan shops, as in much of Georgia, primarily specialize in various wood-working techniques.

The specialty for Borjomi’s artisan carpenters seemed to be making various types of wooden bottles for carrying/drinking the famed mineral water. The town square is one of Borjomi’s most beautiful standouts.

Gazebos, river-side swings, and strolling couples fill the small paths. Compared to the rest of Georgia’s rolling hills, vineyards, and mountains, Borjomi really does seem like the country’s national park.

My day trip to Borjomi was coming to an end but the most important object on the itinerary was still not checked off. I could see tourists standing around it, a small spring located in the town’s square.

They were carrying water bottles, carved wooden cups, and even just small dixie cups. It was time to try the famed mineral water of Borjomi.

Walking towards the Spring made me feel as if I was stepping into some sort of baptismal ceremony.

I felt like I was in one of the stories from Sunday school but instead of wading into the waters of the Jordan River, I was about to try Stalin’s favorite type of mineral water.

With cup in my hand, I knelt and stuck it into the pool. I brought the cup to my lips.

With how much I had heard about the famed mineral water, I expected my mouth and body to begin surging with euphoria.

I took a sip. The mineral water of Borjomi was absolutely awful. There is no further explanation needed.