10 Films to Fuel Your Travel Curiosity

Films You Can Stream to Motivate Your Travels

The films reviewed below are from oldest to most recent, showing that inspiration can be found in various decades. Not only that, but there are different countries to visit in these films. So get your favorite streaming service open, and enjoy these travel-based films.

Following the life of an Inuk, Nanook and his family are traveling through a difficult storm, building igloos, and living their everyday life. Although the film is dramatized by the director, Robert J. Flaherty, it still shows the difficulties of travel and living, which we do not have now.

The movie can invoke a sense of desire to maybe even try to experience traveling similarly to the times and to push our limits of travel farther. If the movie spikes interest further, there is great controversy behind how Flaherty made this “documentary”.


A wonderful classic of historical fiction shows the battles between England and Scotland in beautiful landscapes. An insight into the history, battles, a tragic love story, and drama, this movie has a bit of everything despite the length.

If you want to learn something new and awaken that desire to travel, this movie is right up your alley because of the cinematography and directing. After watching the movie, it makes me want to take a tour in Scotland that maps roughly where everything was filmed or meant to represent.

Based on a true story, Motorcycle Diaries follows two friends ( in 1954 who decide to travel via motorcycle from Buenos Aires to Peru (about 8,700 miles) in four and a half months. Seeing the struggles of other Latinos, trying to attain their goal in time, and the coming-of-age experiences the two have is fascinating to see.

Imagine, trying to trace those steps the two friends take across Latin America, to try and backpack from one location to another with the desire to see as much of the continent as they can. But like all methods of traveling, there is always personal growth lurking close by.

A movie that pays tribute to skiers who dare to tackle the world’s most dangerous and biggest mountains. Kye Peterson is challenged to ski down the trail that killed his father, Trevor Peterson, nine years ago.

As a fifteen-year-old, Kye has a few mentors to help guide him down this torturous trail. This heartwarming, coming-of-age story will surely inspire the viewer to challenge themselves, maybe not to this level, but to face a head-on difficulty.

Follow two friends in a rickshaw rally competition where they travel from Mumbai to Chennai in twelve days. “You have to witness it, just to see how insane it is” spoken by one of the friends; the experiences they undergo these days are unlike anything else.

From breakdowns of their rickshaw to dealing with intense weather, their adventure is the perfect documentary to fuel your rickshaw. Across the world, there are challenges like this to varying degrees, and this film makes you wonder, “Am I capable of this?”

A German couple and their dog decide to buy a school bus, and completely refurbish it into a liveable moving home. In this cross-country North American journey, watch as they build their mobile home and see the beauties of North America. As someone who one day wants to do just this, their travels will constantly remind me to do the same thing and hear the stories of North America.

In this thirty-nine-minute documentary, six surfers decide to catch a wave where no one has before: the freezing waters of Iceland. The reason for this dangerous adventure is because of the intensity of the waves due to a huge storm on the way.

It’s said to be the worst storm Iceland has experienced in twenty-five years. Despite the levels of danger and low temperature of the water, that does not stop these surfers from getting the best ride of their lives.

Two best friends, Léa and Camille, travel to Latin America in search of a cure for a terminal disease that Léa has. From shamans to plant medicine to personal philosophies, these two try to live out every day as best they can, because they don’t know how much time they have left together.

Although it’s a sad tone, the film reminds us to take that trip we’ve been planning if we can and pull along our friends with us. Even if it’s a smaller trip, take that chance to go on an adventure with your best friend. 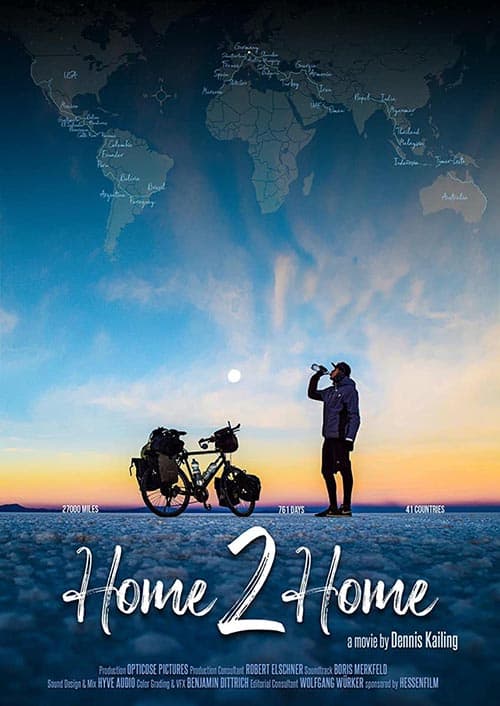 A family man losing his moral compass decides to return to his hometown in Italy. After going to visit his grandfather’s old wine vineyard, he sees how broken down and abandoned it is; he now sees his new life’s purpose. A good family movie that reminds us of where our ancestors are from and to appreciate where we are now. With a movie featuring a fascinating vineyard, you cannot help but want to visit one of your own in Italy.

27,000 miles, 761 days, 41 countries, and 6 continents, all on one bike. Dennis Kailing takes the journey of a lifetime around the world, seeing everything he possibly can. Although he makes new friends along the way and experiences different cultures, there are still various struggles that Dennis has to overcome, alone. Cheer on Dennis through the movie, then start planning your own vacation to see somewhere new.

Please feel free to comment your own favorite travel film below!

Christy Bogan is a Massachusetts-based writer who tries to find a story in everything she encounters. Whether it’s in a new country, a favorite restaurant, or a local museum, Christy writes with the intent to tell a convincing story. No matter the location or subject, she enjoys capturing the emotions of the area.