Peru: Hiking Up a Rainbow 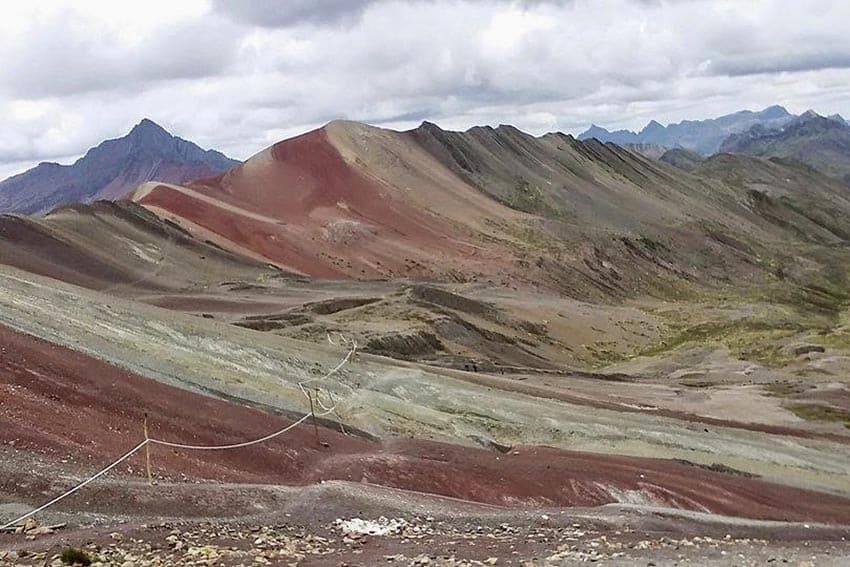 Months before I traveled to South America, I saw a picture of Rainbow Mountain somewhere on this vast internet.

The second my eyes touched the image of the thick stripes of vivid colors plastered across the mountain’s surface, I decided I had to go there. I was determined to see this unique phenomenon in real life. 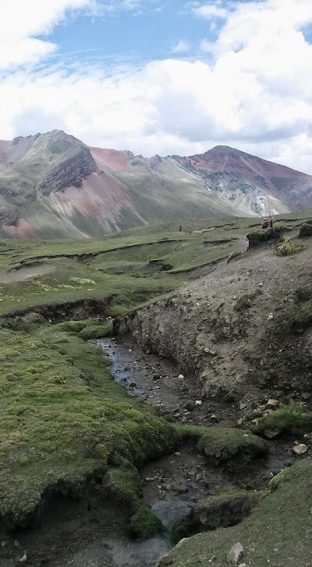 This past October, I embarked on a relatively short, South American adventure consisting of one month in Ecuador and one month in Peru. Regardless of how many unforgettable adventures I experienced during this time, the anticipation of hiking Rainbow Mountain lingered in the back of my mind throughout my entire trip.

Once I arrived in Cusco, Peru, I knew my goal would soon be fulfilled.

By mid-November, I had finally booked a day trip to Rainbow Mountain. I had a day off from my bartending job at Milhouse Hostel, so I rallied two friends to join me and purchased my ticket.

I used a company called Liz’s Explorer, which charged only 100 soles (roughly 30 dollars) for the entire day, including transportation and two meals. I felt relieved that I didn’t book the tour online in advance, as online companies sell the same tours for as much as four times the price.

But by 7 am on the day of my tour, I wasn’t feeling as optimistic as I had hoped. After stumbling out of bed at 3:30am, half-heartedly throwing on my hiking boots, dragging my friends down to the hostel lobby for pick-up, collapsing into an open seat in the small van, and enduring three hours of bumpy roads and groggy discomfort, I sat at a long wooden breakfast table in a small hut in some remote little village.

While the tour guides went over plans and precautions for the day, I sipped lukewarm coca tea and tried to stomach the small loaves of stale bread. Despite my slight headache from the apparent altitude and nausea creeping up on me from the lack of sleep and nutritious food, I tried to keep a positive attitude. Just remember, Gabby, this is the day you’ve been looking forward to for months.

After our inadequate breakfast, we hopped back in the van and drove for another 30 minutes before reaching the starting point for our trek. Countless identical white vans parked in a small lot as floods of passengers disembarked, stretched their limbs and started taking photos. “How are people already taking so many photos if the hike hasn’t even begun yet?”

I asked myself. But after absorbing my surroundings, I realized that nature’s beauty infused itself into every single surface regardless of our proximity to the actual Rainbow Mountain. Towering, snowy peaks glistened in the distance, rich green grass sprouted from the soft earth and the brilliant sun smiled at us from the bright cerulean sky. My spirits lifted instantly as I inhaled the sharp, chilly air, and with that, the trek began. 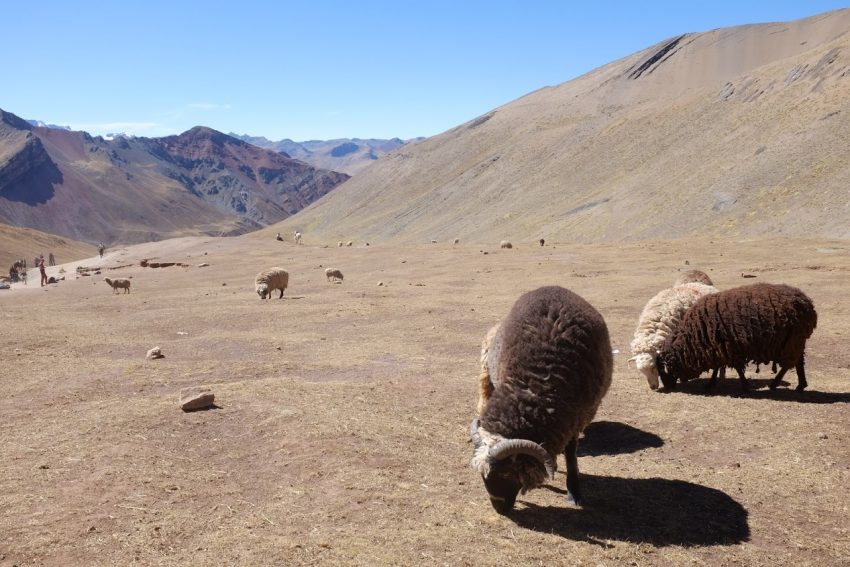 Though I have hiked much steeper mountains than this one, the extreme altitude turned Rainbow Mountain into one of the most challenging hikes I’ve ever done. After just 15 minutes of a very short incline, I found myself gasping for air and collapsing onto the ground for a break. I kept asking myself “What is wrong with me? I’m in decent physical shape, this hill isn’t even that steep, why do I feel like my body is disintegrating?”

The starting point of this trek is roughly 4,300 meters above sea level, which is by far the highest altitude I had ever set foot on in my life. The lack of oxygen and thin, dry air makes even the simplest tasks more physically taxing, therefore this hike really is not for the faint-hearted.

I was comforted to know that others were struggling just as much as me, so I tried not to get discouraged. Hundreds of small horses were scattered along the entire length of the trail to pick up exhausted hikers who could not walk any farther. Despite the appeal of a horse escort, I was determined to hike the entirety of the trail on foot, so I pushed on.

One hour into the trek, after a few short but tiring inclines near the start, I was thrilled to reach a stretch of somewhat flat trail. The next hour and a half consisted of leisurely walking along the footpath, where the thick dirt had become smooth and compact after endless footprints.

The sun continued to illuminate the horizon and soothe the skin of our red, sweaty faces. In every direction, layers upon layers of rugged hills and mountains formed majestic fortresses around the wide open space of the trail. Reds, greens, and browns crawled up and down the mountains’ surfaces, creating multicolored platforms for little stone villages and herds of sheep, alpacas, and horses. The gorgeous view and the freshness of the air ensnared my attention so that I forgot about the initial struggle of the hike for a while.

Two hours into the trek, the menacing face of another steep hill began to taunt me from the distance. The entire upward hike lasted about three hours, but this last hour was continuous incline, and therefore the true test of my physical strength and mental tenacity.

My legs burned with every step and my heart pounded in my ears as my breath became shallow and staggered. All around me, people succumbed to the option of riding a horse up the hill, but I wanted to prove to myself that my own legs could carry me up the mountain. My friend and I shamelessly stopped for a break every two minutes or so, as steady breathing became harder and harder to maintain.

The last stretch of the hike brought us along the bottom side of Rainbow Mountain. Bold streaks of color began to seep along the ground, and I knew the final destination was close. To reach the actual peak of the mountain, we had to endure one last short but incredibly steep hill.

This last slope was less of a hike and more of a climb, using hands, knees, and a lot of willpower to scramble up to the top. At that point, nothing attracted me more than the thought of crumbling onto the ground to rest, not even the much-anticipated view.

Once I had caught my breath and stretched my legs, I pulled myself together and turned to face the image that had danced around in my thoughts for so long. The Rainbow Mountain looked exactly like the pictures, yet somehow felt so much more impressive. Maybe because in real life I could take in the actual size and texture of the mountain. Or maybe because after hiking for three hours, I felt a deeper appreciation for this final view. But seeing this breathtaking scene in person was nothing but surreal.

To reach the highest viewpoint and enjoy the best view of the mountain, we had to climb up one more steep hill. But because I was so excited to finally be at the top, my adrenaline kicked in and I basically sprinted up the hill despite my exhausted muscles screaming at me in protest.

Upon reaching the highest point, at an elevation of 5,100m above sea level, I not only enjoyed a picture-perfect view of the Rainbow Mountain and its rich stripes, but I discovered the beauty of the other areas that aren’t as frequently photographed.

The view to the right of Rainbow Mountain was almost more stunning than the interesting colors of the popular scene. Jagged mountains jetted into the sky as sloping valleys filled the ground below. Vibrant natural colors continued to intensify the scene, with snowy blue peaks and white clouds filling the background while a rustic red blended with various shades of brown and green earth.

I thought the one, colorful peak of Rainbow Mountain was all I would see, but nature surprised me with its unexpected expressions of hypnotizing beauty.

I would have gladly stayed at this viewpoint for hours, marveling at the incredible scene, but the freezing wind began to numb my hands and hail began to pelt my face so I decided to descend. The downhill trek back to the van took about two hours, and the farther down we walked the warmer the climate became. My legs felt like jelly at this point, and my skin felt raw after enduring the bitter cold at the viewpoint, but my bubbling happiness from accomplishing my goal overshadowed any hints of physical discomfort.

Also, because I wasn’t gasping for air every second on the descent, I was actually able to observe the magnificent landscape that had apparently followed us along the trail before. The earth’s varying color palette consistently swirled through the endless string of mountains and hills, and the sky remained a faithful, clear blue.

Not only did I feel thoroughly impressed with myself for hiking the entire journey, but I felt repeatedly impressed with nature and how every scene could change but still remain pure and breathtaking. Hiking up this mountain reminded me that nature is the most powerful, intimidating, and gorgeous force to exist.

Rather than try to dominate it, humans should just appreciate its beauty and create peaceful connections with the earth. Though I attempted to conquer the Rainbow Mountain, in reality, the beauty and power of nature conquered me. 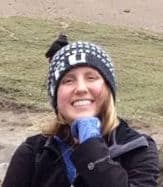 After a few years of studying, volunteering, and working abroad, Gabby Boucher has developed an appreciation for different cultures and a knack for budget travel. She always carries her love for wine, hiking, and fluffy dogs with her while exploring the world.  She’s an American, currently living in New South Wales Australia.