Oman: A Visit to Jebel Akhdhar

O Man, Get a Load of This Place!

When you think of what it is about a place that makes your average world nomad go nomadic for it, the Middle East wouldn’t always head up the list.

Too arid; too hostile; too unstable; too conservative; too boring; too damn hot and dangerous; and too downright illiberal for our enlightened tastes.

But the naysayers haven’t factored in one key outlier: Oman. Talk about three standard deviations from the Middle Eastern mean, this modest country, of a mere five million, feels nothing like its neighbors. Not in its physical aspect, anyway.

Nor in the character of its people. Maybe we’re guilty of thinking too regionally. Lumping countries together in a kind of painting by numbers mentality, which, as seasoned travelers, we should know better but to resort to. But slotted in there between the forbidding sands of Saudi Arabia, the empty glitz of the Emirates, and the monsoon-mother of an Indian Ocean, you could be forgiven for writing Oman off. At your peril.

Oman – the oldest independent state in the Arab world – is quintessentially Middle Eastern. But then again it’s not. It’s New Mexico with dishdashas. It knows history affords it bigtime bragging rights over its oil-rich neighbors but, ironically, it is they who do the boasting. It was one of the first corners of the Arabian Peninsula to receive Islam in its earliest, gentlest form.

For centuries its skilled mariners – Sinbad among them – traded African slaves, and about anything else with a sell-on value, up and down the coast of Zanzibar. The Sultanate of Oman, and in particular its capital Muscat, grew rich through seafaring, but not necessarily hand-in-hand with human rights. 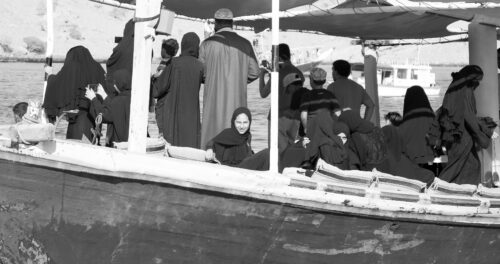 It became a British protectorate in the 1850s and to this day its pipe bands play Edinburgh’s annual Military Tattoo. Oman is so unlike its neighbors that it’s almost unimaginable seeing it sitting next to anywhere else.

Take a bite out of Oman and, rather like stuffing a profiterole with kale, it’s that paradoxical blend that will tantalize your taste buds.

I challenge you to come away from Oman unamazed as to how you had traveled everywhere from Tierra del Fuego to the Sea of Japan, but you had never much heard of this Switzerland of the Arabian Peninsula, far less why it’s compared with Europe’s indie kid (who do you think, through mediation, keeps diplomatic channels open between Iran and its Arab foes?).

A long arc of history spans Oman’s high, wide and empty spaces. From its northern Governate to its southern border with Yemen is a thousand-mile drive down the spine of the Hajar Mountains and beyond.

Being a little larger in size than Italy, with ancient human origins spanning 100,000 years, there’s a temptation to conjure five places to see before you die article about the land of Sinbad.

However, as journeys are better framed – in the literal sense – as memory factories, nothing moves us more than a good old tale of at least one of the 1001 Arabian Nights. Here’s one of mine…

Jebel Akhdhar means “Green Mountain” in Arabic. If this were Scotland, there’d be so many Jebel Akhdhars that they’d lose any novelty value.

But this being Oman, a country whose border runs for roughly 650 km along the world’s largest sand desert, the Empty Quarter, green mountains are a rarity.  To be green, they have to be lifted high off sea level, making Jebel Akhdhar a high plateau – or more specifically a geological dome – more than any classic mountaintop.

Most visitors to Oman make a beeline for Jebel Akhdhar. Its cool tranquility is a must when spring turns the coastal plain into a Finnish steam sauna. Until not too long ago, the green mountain was off limits to all but the military. Then in 2011, it was declared a nature reserve.

After a spot of ingenious roadbuilding, visitors followed. To get to the plateau, first, they would legally need a 4WD to pass the checkpoint at the foot of the mountain. Thousands of feet of sinuous switchbacks on one of the great mountain roads of the world later and the public were sold.

When I went there for the third time, I got a true taste of Omani hospitality. But things could have gone awry. Passing the checkpoint at the bottom, all was fine. The heat shimmered off the road.

The air was thick with fine dust particles trapped in hot vapor. But we knew the only way was up, so nothing mattered.

My tank of a car trundled higher and higher past immense slabs of uplifted Precambrian rock and surrealistic outcrops of the super-rare ophiolite. This was geology on a whole other level, as a generation of British geologists would discover in the 1960s.

As we climbed, the heat abated somewhat. What was 40 centigrade at the foot dropped to a balmy 28 near the top.

The six cylinders of my VW Touareg seemed to be holding up nicely until, just approaching the final blind summit before the long descent down onto the plateau and into the Sahab Resort, something inside the offside wheel went thud. The VW refused to budge. We were alone near the summit, far from anywhere.

Well, at least the temperatures were tolerable; more so as night was falling. Practically no cars passed by. Too out of our depth to care, we did what any self-respecting voyager would do in a minor emergency: got out of the car and had a smoke. Minutes felt like hours. Preparing to abandon the car on the long road to the sanctuary, as rose-red sunlight warned of the evening, a pick-up came over the brow.

The lone driver stuck out his head and then dabbed the brakes. He got out wearing the classic Omani full-length robe (kandura) and a beautiful walnut and cream headscarf (masar) wrapped around his head. He announced himself as Thani.

Two minutes later Thani was hobbling into town behind the wheel of my VW while I drove his pick-up behind him.

He headed for the only garage on this entire high domed plateau, got out, mouthed urgent instructions to overworked Indian mechanics, told us to hop in, then proceeded to deliver us directly to the door of the Sahab resort, where we had booked rooms. Before he sped off, in his faltering English, he said:

‘You three must come to my house for dinner. Inshallah, I pick you up tomorrow.’

And so it was. Thani’s village was visible as a tiny cluster of white deep in the wadi far beneath the lofty heights of the Sahab Resort. From the resort’s panoramic viewing platform, my eyes followed the landscape to tomorrow’s dinner date. Dirt tracks wound downward past orchards of pomegranate and grape.

Stepped terraces with fruit bulging on the vine. Deep escarpments gouged out of this lithic masterpiece. Monumental stacks of sedimentary rock jutted up, sentinel-like with a fat, blood-orange sun sinking down, getting wedged between.

Man, the view could have been New Mexico until the reality of abayas, kanduras, hijabs, and masars reminded us that we we were 12,000 miles from Santa Fé.

Thani came for us, as arranged. The consummate gentleman, he drove us down the 2,000ft or so to his village. The descent was mesmerizing. And dusty in the tail stream.

I thought of Mad Max Fury Road and the lone verdant mountain surrounded by lifelessness. This wasn’t a Miramax apocalypse and the world had by no means ended.

But there was Thani, an unassuming local every inch the hero. He took us on a walk through a system of aqueducts that delivered flash floodwaters to each and every orchard perched on the edge of this beautiful abyss. Life had taken a firm foothold in a canyon that was, by any reckoning, heaven sent.

Between these great boulders water oozed, insects buzzed and islands of life sprung eternal. Cradled in this Shangri-La, Thani knew how privileged he was, and that beatified look on his face we saw.

Few places I had seen in the Arabian Gulf could ever be this fecund. Apricots, grapes, pomegranate, fig, plums, and pears. Even roses.

Seeing this type of spontaneous eruption of color in a badly parched region is as rare as hen’s teeth. But not here on this rugged island in the sky. Here the hens have a full set.

A Son of the Village

If there was one thing Thani was proud of more than being Omani, and that was to be a son of this village. To be born and raised on Jebel Akhdhar, for Thani, was God’s greatest gift. Taking us into his house, we sat cross-legged on carpets drinking tea, nibbling dates and other local produce. His brother came for the occasion. His children, too. His wife even came through to the salon to say hello.

To be able to host three Europeans was a great honor for Thani. His warmth radiated out until we all felt blessed by the moment. Night had fallen when we finally emerged from his house. We instinctively knew that something special had happened. Thanks to the humanity of one man, we had crossed this supposedly insuperable divide between our world and theirs. And what we found was common ground. And on it grew orchards high above the baking plains. 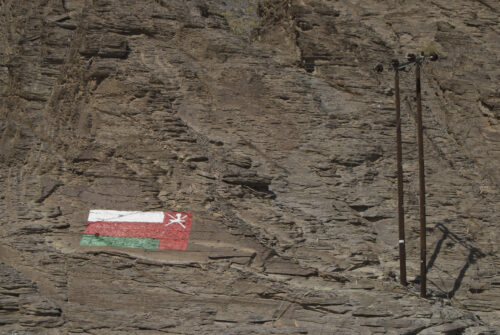 I have other tales from Oman that only Oman could dish up. There was that time I nearly expired kayaking out into the Straits of Hormuz into 47ºc of blinding hot haze when even the cowering cormorants thought I was mad.

Then there was the Little Snake Canyon, bouldering between insane chasms like an ant stuck between two standing sheets of A4 paper. There was that morning we woke up to ice on the windshield, as if anywhere in Arabia does hoary frost.

I could go on, but it’d take many more Oman adventures before reaching anywhere near Shahrazad’s 1001 tales. 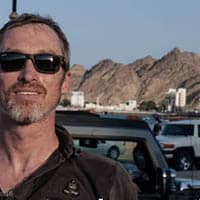 Scott Shanley is a Scot by birth. He has covered prodigious ground traveling the world on all but Antarctica.  When not traveling, planning, or dreaming of it, he can be found writing and tutoring English at universities to fund his adventures. He has lived in many places and now lives near London Heathrow, on the Kennet river in West Berkshire in a big old barge.