The Elegance of Muscat in Oman

What makes us travel to a specific destination? Well, we have seen pictures, read stories, heard people talk about their adventures and experiences. Our curiosity has been aroused and we want to go and see for ourselves.

Once we have arrived we can sometimes not see what all the hype is all about. More often we are happy we have come and enjoy what we see and do. And, on rare occasions, reality surpasses our expectations.

That’s exactly what happened to me on my recent visit to the Middle Eastern country of Oman. My only regret was that I had five days instead of five weeks.

Stepping off the plane at 6 am even I who thrives on the heat, had to gasp. Temperatures of close to 100F and humidity enveloped me like a very warm, damp blanket. This however was something I had expected and prepared for because I had chosen August, the hottest month in Oman for my visit.

The reason was threefold: hotel prices off-season are a lot lower than during the high season, which meant I could easily afford the fabulous Crowne Plaza which otherwise might have made a hefty dent in my bank balance. Secondly, it was Ramadan which allowed me to experience the holy month of the Muslim world in a deeply religious country and thirdly, due to the lack of tourists, all attractions and sites were practically empty.

Breezing through immigration and customs in a matter of minutes was a pleasant surprise.

My pre-arranged driver in immaculate white dish dash, complete with perfumed tassel at the neck and wearing the elaborate Omani headdress, held up a discreet sign with my name and we were on our way in an air-conditioned Mercedes from the airport to Ash Shafi Street on the beach where the hotel is located.

The journey took us through the length of Muscat and I was struck by the incredible elegance of a city that, for the most part, did not exist 45 years ago. Here, the billions of petrol dollars have been put to the best possible use, by creating buildings in the traditional Omani style.

Otherwise, if they hadn’t still looked so new, these buildings could have stood there much longer. And, the only colors in evidence are white and sand.

No garish paint, not even colored tiles, mosaics, or gold, everything simple as can be, but oozing wealth and style at every twist and turn.

Once settled in, my friend Wendy and I headed straight for the reception desk to see what was on offer by way of tours. Five days is a short time, Oman is a huge country and we wanted to have a taste of everything; beach, dunes, mountains, the sea, castles, museums, Bedouins, camels, date palm oasis, souks, and a lot in between.

Choices needed to be made and we settled on a day trip which would take us, partly off-road, approx. 170km southeast of Muscat to the mountain range of Jebel Shams with Oman’s highest peak over 3000 meters, deep canyons, abandoned mountain villages, waterfalls, and the remains of Al Hamara, an ancient date palm oasis.

Our image of Oman had been of the desert, towering sand dunes, and the sea, we didn’t know that there were such massive mountains, which was why we decided to go.

Another white dish dashed vision appeared at 8 am, opened the door of a sparkling new 4×4, and happily explained, in perfect English, that we were the only passengers because there were so few visitors during Ramadan.

What luck, a private tour at the price of a ‘common’ one! Just a brief word of caution: nothing is cheap in the Middle East! The day trip cost us approx. $100 each but was so fabulous we would happily have paid even more.

Smooth four-lane motorways lead out of Muscat and slowly but steadily, the climb began.

The landscape changed dramatically, the lush green of the coastal region gave way to harsh rocks and rubble, wide, bone dry wadis ran right across the road, and then we saw in the distance Wadi Gul with a cluster of abandoned houses glued to the steep mountainside.

At the bottom was Al Hamara, the old oasis, and then came the turnoff to Jabel Shams. A little while back, our driver had turned into a petrol station. We thought, he needed gas, but no, ‘I have to buy food for you,’ he explained. ‘But,’ he continued, ‘you can’t eat it. It’s Ramadan, remember?’

We certainly did and were quite prepared to starve like everybody else until the time of iftar, the evening meal rolled around. During Ramadan, Omani tour operators are obviously in a bind.

On the one hand, they need to observe the fast, on the other, they don’t like to cause the non-Muslim tourists discomfort.

And there was the Solomonic solution: he pulled off-road around a corner, handed us a Coke and a limp sandwich each and we gobbled them down, crouched low in the back seat in case a passing police car would spot us. All went well and with much laughter, we resumed our journey.

As we climbed, the temperature dropped and the moment he engaged the four-wheel drive and went off-road to reach the peak, we looked out the window and couldn’t believe our eyes. Dark storm clouds raced across the sky at an alarming speed and within seconds the first fat raindrops started to fall.

Who would have thought it would rain in Oman? The drops quickly turned into a downpour and a fierce wind buffeted the car. The wadi filled up with water in no time and a current ran across the path, splashing water as high as the roof as we went through.

At the top, we could hardly open the door, the wind was so strong, but we struggled out any way to look down into one of the deepest canyons I have ever seen.

This was also the nearest I have ever come to fall to my death from a mountainside because nothing but a flimsy steel rope separated us from a sheer drop of at least 1000 meters.

The wind pushed from behind, we hang on for dear life to the rope with one hand, took pictures with the other, and laughed and laughed from the sheer exhilaration and danger of it all. That adventure alone was worth the entire Oman trip.

After nature at its best and fiercest, we decided to visit Oman’s biggest and most emblematic castle, the fortress of Nizwa. As far back as the 8th century, Nizwa was the capital of Oman.

The great fortress, dominated by a round tower, the biggest in the country, served as a defense as well as the residence of the Imams and a center for education and enlightenment, being the seat of the country’s leading religious scholars, poets, and scientists.

Nizwa’s position on the most important trade roads of the time, accounted for the city’s wealth, particularly during the rule of the Ya’ruba dynasty during the 17th century when the commercial and political dominion stretched from the Indian coast of Coromandel to the Red Sea and south to Pemba and Mombasa.

The citadel as it stands today has been rebuilt, expanded, and refurbished many times–nowhere else can you get such a compressed overview of the long history and culture of Oman.

The centerpiece, the round tower has cunningly constructed inner staircases, doors, and ‘death traps’ through which hot oil would be poured onto potential invaders.

There are inner courtyards to be admired as well as the bedroom of the Imam, guest rooms, kitchens, bathrooms and arts and crafts workshops.

Again, we had the good fortune to be nearly the only visitors and could climb around at our heart’s content. The view from the platform of the tower over the town below and the mountains in the distance is fabulous.

I particularly loved the heavy, carved wooden doors, a typically Omani feature which we also found in new houses.

A small souk nestles at the bottom where you can buy jugs and ceramics and the modern fruit, meat, and vegetable market is across the road.

Sunset on a dhow

We still hadn’t been to the desert, the best option would have been a two-day tour to the pools and dunes of Wadi Bani Khalid and Wahaiba Sands and, of course, there was Salalah at 1000 km to the south. Alas, there was no time, so we decided to go all romantic and embark on a sunset tour on a dhow along the Muscat coast.

Both, Wendy and I couldn’t get enough of the coastline. Not only do incredible rock formations jut out into the sea, but the colors of the stone are also of such stunning opposites as I have never seen before.

Shimmering, white marble alternates with black granite, rubble, and pebble in between and here and there a stretch of the finest, whitest sand, forming a secluded beach that can only be reached from the water.

Watching Dolphins on the Coast

So fascinated by it all were we, that we did not go on one but three boat tours: the first to watch dolphins, the second to simply view the coast and the third to see it all again at sunset on a dhow. For me, a dhow is the most romantic type of vessel. Sitting on the carpet and cushions where once the wares were stowed, protected by a sun sail, watching sea and land glide by is the ultimate in chilling out.

We boarded ‘our’ dhow together with a handful of other happy sailors, all of them from nearby Dubai, Bahrain, and Qatar, and watched the changing colors, the slowly sinking sun, the Portuguese castles which frame the port, and Sultan Qaboos’s blue and gold palace bathed in the last rays of sunshine.

A perfect ending to a perfect trip with only one wish left: to return as soon as possible and see the rest. 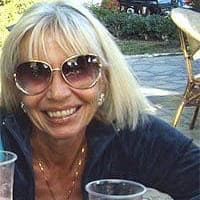 Former lawyer Inka Piegsa-Quischotte lives in Turkey and writes about her travels in many publications, including GoNOMAD and Travel Awaits.