Csikós: Riding the Range of Hungary for Centuries

Cowboys are usually associated with the American West and are portrayed as glamorous and heroic figures who tamed the frontier.

However, many people would be surprised to learn that there were cowboys in Hungary long before America was discovered.

Hungarian “cowboys” are called csikós (pronounced Chee Kosh’) and they’ve reigned supreme over the puszta–the steppes and wetlands of eastern Hungary for over a thousand years.

They took care of the livestock native to the area, such as Hungarian Grey Cattle, Mangalica pigs, and Hortobágy Racka Sheep, and fought off invaders.

Today, they still manage and care for livestock but also demonstrate their equestrian skills for visitors during performances hosted by horse farms throughout the region.

We live in Arizona and love anything that involves horses and cowboys. So, when Budapest was one of our ports of call on a Viking Danube River cruise, we jumped at the opportunity to visit a horse farm to see one of these shows. We weren’t disappointed because it turned out to be one of the highlights of our vacation.

Traveling Across the Puszta

Our trip began with a two-hour bus ride from Budapest to the Hortobágy region in Eastern Hungary. As we gazed out the window, we saw a flat, grassy plain that looked like Iowa or Kansas with rapeseed fields instead of corn and wheat.

Our guide explained that the steppes we associate with Russia begin in this region and continue through Central Asia to Mongolia. The csikós are descendants of the Magyars who rode across these steppes, conquered the Carpathian Basin, and established the Kingdom of Hungary. And those who settled in Eastern Hungary developed an agricultural and equestrian culture unlike anywhere else in the world.

The Csikós in History

The csikós led a semi-nomadic existence for hundreds of years, herding thousands of cattle and sheep across the puszta and protecting them from robbers and predators. They slept under the stars, and cooked goulash and slambuc, a stew made from potatoes, bacon and noodles, in vasaló, temporary shelters made out of reeds.

Since they were constantly under threat of attack, they taught their horses to heel, sit and lie down on command–skills we usually associate with dog obedience training. These skills were critical because they could mean the difference between life and death during battle. When horses sit, they’re a smaller target and provide protection for riders. When they lie down, they “disappear” in the long grass that covers the puszta.

After the fall of communism, the Hungarian government established ranches and horse farms countrywide as part of an initiative to rekindle the csikós culture and traditions that had lain dormant since the end of World War II.

With no more battles to fight, today’s csikós train on horse farms to perfect skills their ancestors used to conquer the puszta and perform in equestrian shows.

Arrival at the Horse Farm

We arrived at Új Tanyacsárda, an inn and horse farm, and were treated to paprika bread, Hungarian wines and pálinka, a VERY potent apricot brandy with an alcohol content between 37% and 86%.

We arrived at the arena and had just taken our seats when we heard the thunder of hoofbeats and bullwhips cracking. A herd of horses arrived in a cloud of dust accompanied by csikós.

They made an impressive picture in their billowing electric blue shirts, wide-legged pants, and wide-brim, feathered hats as they lined up.

Many of us commented that their apparel would get a few chuckles from blue jean-clad cowboys in the American wild west. But they wouldn’t be laughing once they saw the csikós demonstrate their extraordinary riding and horse training skills.

Csikós never strike their horses. In the past, they used their whips to simulate gunshots during battle so the horses would become accustomed to the sound and fool enemies into thinking they had more ammunition than they really had. Nowadays, the cracking bullwhips are just part of the show.

The horses live around 27 to 30 years—much longer than their Western counterparts–because of their training.

The horses are taken out in the field when they’re very young and the trainers play with them to develop a relationship and build trust.

This bond was essential during battle and is also important today because horses and riders have to work as a team.

The csikós dismounted and demonstrated how they command their horses to heel, sit and lie flat on the ground—just as their ancestors did during battle.

Then they remounted and demonstrated their incredible equestrian skills. They knocked wooden pins off posts with their bullwhips while riding at lighting speed and held full glasses while standing on a galloping horse without spilling a drop.

We also met a couple of Hungarian Grey Cattle native to the region. They’re only semi-domesticated, which means they have a wild side. When we saw their long, sharp horns, we all preferred to keep our distance and not do anything to get on their bad side.

The show ended with the csikós demonstrating a game they play during leisure time and village celebrations. It’s a cross between rugby and reverse tag, and the object is to grab a red and white checkered flag and be the first to carry it across the finish line.

It sounds easy, except the players are riding at top speed and everyone else is trying to grab the flag. One of the players eventually breaks free and crosses the finish line. As a prize, he’s rewarded with a kiss from the prettiest girl in the village.
Bullwhip Skill

After the show, the csikós showed us how adept they are with their bullwhips. We watched several effortlessly whip empty wine bottles off a fence post. We all had a chance to try it and quickly found out it’s much more difficult than it looks.

The whips are about 15 feet long and are difficult to control. Some of us came close to hitting the bottle but couldn’t get enough momentum to get the job done.

My husband eventually won, and we shared his prize–a bottle of Hungarian wine–with our fellow passengers at dinner that evening. Since it was the last night of our cruise, we toasted the wonderful time we’d had on the Danube during the past 10 days and shared our memories of meeting the csikós.

How to See a Horse Show

River cruise lines, tour companies and tourist agencies in Budapest and other cities in the area offer excursions to the horse farms. All include transportation and a local guide. Some include light refreshments and snacks as ours did, and others include a full-course meal complete with live gypsy music. 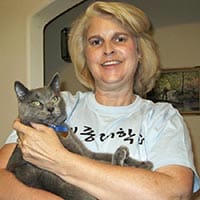 Marni Patterson is a freelance journalist who writes about destination travel, local customs and cultures, and history. She’s lived all over the U.S, spent a year in Belgium as an exchange student, and now calls Phoenix, Arizona home. You can catch up with her on her website and Instagram.