I was cycling south through Central Europe and on passing from Austria into Hungary I was thrown into a world of complete incomprehension.

Hungarian was for centuries one of Europe’s mystery languages. Surrounded by Germanic, Slavic, and Romance tongues, it sits in the middle like a philological teenager, obstinately distant from all these families.

Somewhere deep in the past, its Uralic roots entangle with two of Europe’s other linguistic misfits, Finnish and Estonian, and several travelers were keen to share this insight with me.

But Hungarians themselves were often quick to point out that the similarity today is scant, with only one or two percent of words sharing the same origin – and these mainly to do with fishing and reindeer.

Woodland gave way to wet green plains as I pedaled across the border into Hungary. Looping past the border town of Sopron, I entered the hazy atmosphere of Fertö-Hanság National Park, taking breaths of warm damp air fragranced with summer blossom like a laundry room.

From the perspective of my bike saddle, the Park seemed to encompass different worlds. Beyond the oak woods to the west, a single Alpine peak spiked the Austrian sky, while to the east an unbroken vista of pastureland merged into the marsh and, finally, an expanse of reed-fringed water.

This is Lake Fertő, Niesueldersee in German, the westernmost of the steppe lakes that speckle central Eurasia.

Its presence suggests why nomadic horse riders from the Asian steppes felt at home here and chose to settle, the outlines of their language preserved in modern-day Hungarian.

A purple heron rose, flapping apathetically, from somewhere within this swampland. I stopped and listened to the sparse cries of the water birds cut through the thick atmosphere. At first, as dusk blended the day’s colors, the scene was Edenic, but within a minute I was beset by feasting insects.

They chased me through the deepening darkness; I rode on until I’d put some distance between my skin and this mosquito-patrolled marshland.

The Village of Balf

Finally, I came to the edge of a small village named Balf. Here, just down from the road, encircled by dim orange streetlights and six public benches, stood a timber pavilion. I wound my way along the red-brick path that led to its front.

A wooden ledge ran around its interior and at its core rose a wide-eyed face, wild-haired, fat-cheeked, roughly-carved from bronze that neglect had flecked with verdigris, and gurgling a meager stream of water that stank of sulfur. Other than the soft splash of the fountain, all was silent. I’d found my next bedroom.

I spilled the contents of my panniers across the wooden ledge and cooked my nightly spaghetti ration, enlivened by a little parmesan-crusted saucisson sec.

Just as I finished eating, with red pesto smeared over pans, bowls and spork, an eery string of lights appeared at the top of the road I’d arrived on.

The first dozen headed directly towards me while more kept materializing at the hill’s crest like candles during midnight mass.

As they reached the glow of the sentinel streetlights tiny luminous jackets flushed into sight – a procession of children, aged around 10, dark-haired and sharp-featured, began to mass around the pavilion. In their midst were two grown-ups.

Filling from the Fountain

They dismounted from their bikes and the adults led them to fill their water bottles from the sulfurous fountain.

I hurriedly pulled my possessions into a tighter heap and fled down the opposite steps, seating myself on one of the surrounding benches with a postprandial cigarette.

They chattered and giggled and paid me and my dirty pots no attention whatsoever, as though my status as a tramp rendered me entirely invisible.

I smoked and watched until one young girl with distinctive dark curls leaned over the pavilion’s railing, held my gaze with her brown eyes, and gently intoned a single word. I waved shyly in response and she smiled before turning away.

Then as smoothly as they’d appeared they all climbed back aboard their bikes with water bottles dripping in the shadowy light. One of the grown-ups led them up on to the main road. I watched the flashing specks of red disappear around the corner, one by one.

I’d learned that the fountain’s water was fine to drink, and so washed up and brushed my teeth before clambering into my sleeping bag. My insect troubles, though, were far from over.

Mosquitoes besieged me: I hunkered deeper and deeper into my fabric fortress and, despite the balmy summer night, pulled on stifling chainmail of sweater, hat, gloves, trousers, socks to protect my ravaged flesh.

The resulting sweat, of course, just attracted more, and the incessant thin buzzing right by my eardrums kept me up long into the night.

Eventually, I drifted into a doze, only to be hauled back to consciousness in the indistinct 5 am light by loud cackles of laughter.

Four figures were beside me in the pavilion – short, round women with furrows in their cheeks and gaps in their teeth revealing sickly pink gums.

They were filling great plastic tubs with water from the fountain, talking and laughing uproariously as they did so, one handing round cigarettes and following them with struck matches.

Flames flared and were swiftly extinguished by a gale of verbal exclamation. I peered blearily around: a battered hatchback was haphazardly parked on the tarmac by the pavilion. One of the women caught my eye and jovially threw me a greeting; I returned a tired grimace, and she passed me a lit cigarette.

It seemed I had chosen as my bedroom the heart of the local community, the aqua vita that kept residents alive and active, cycle-owning schoolchildren and hatchback-driving Roma alike. Still, I didn’t feel resented by the area’s populace – puffing away I pondered on the locals’ reaction were one to cook dinner and sleep on a similar village pavilion somewhere in Kent.

Once their tubs were all sloshing water the women bundled into the car and screeched off in the direction taken by the children. The one who had greeted me earlier leaned her head out the window and threw a fresh barrage of noise in my direction – it sounded friendly enough. The mosquitoes were still humming hungrily so I gave up on more sleep, filled my own water bottles, and cycled on.

A couple of hours later, thirty or forty km down the road, I found a crooked picnic table in a layby backing onto sand-colored cornfields. I stopped – held out my hands – listened – not a buzz. It was 8 am and the sun had driven the mosquitoes away like the little vampires they are. I stretched out on the table, caressed by the faint warmth of the sun’s first strength, and fell into a blissful, undisturbed sleep. 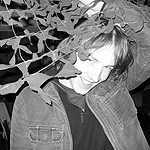 Toby Hill is a writer and reporter interested in sustainable travel and the threats and effects of globalization. A blog giving a full account of his cycle ride from Berlin to Budapest can be read here. You can follow him on Twitter @TobyStHill.