Airbnb for a Year: The Story of One Traveler

I’ve been on a solo road trip for 15 months and counting. So far, I’ve lived in two countries, 13 states, and 21 different Airbnbs.

Sometimes I sleep in my van, but that’s mostly for fun camping weekends. I’ve rented Airbnbs all but a few days out of each month.

When I started my adventure, the lease on my Chicago apartment was up and I was working remotely indefinitely.

I thought I’d travel for a few months, but circumstances allowed me to continue remote work and I didn’t see any reason to stop traveling.

I was as isolated as I’d been in my apartment, except once I went out west, I benefited from hiking trails and the outdoors I didn’t have in the city.

Now, I’m genuinely exploring the country I live in for the first time. I’ve visited over a dozen national parks and am learning more about the history, foods, cultures, animals, climate, flora, and fauna of North America than I ever grasped during short trips.

For example, just the other day, I learned the cockroaches in Georgia are so giant you can practically walk them on a leash. There are wild pigs, er, Javelina, in Arizona.

A California Redwood is probably as wide as your house, and the sunset in the desert really is more colorful (due in part to a lack of pollution and humidity). I never knew any of those things.

I love nomad life, and there are a few reasons Airbnb works for me over van life, hotels or other alternatives.

Staying in an Airbnb allows me to live like a local. Because of the affordability of the monthly rates some hosts offer, I can stay longer.

When I visit for several weeks, I become a community member, find a favorite coffee shop, get an oil change, attend outdoor events, and get to know people.

When I was in Puerto Vallarta, Mexico, I took part in the culture in a way that tourists who come and stay in a resort don’t. I saw firsthand the differences between hotel life and that of a local – and the life of a local was much harder!

I had to barter with my shaky Spanish, navigate the bus system, find the best local beach, and learn how to get my clothes washed – which is easier said than done.

After seven weeks, having an English-speaking staff, onsite restaurants, laundry service, and private beaches made hotel life sound like a dream.

But in the end, Airbnb was much more rewarding than dropping in, soaking up the good stuff, and jetting out.

Why I choose Airbnb over others

I’m not an Airbnb loyalist, meaning I would try something else if it were as good; I just haven’t found anything that is yet. So far, Airbnb’s app, number of rentals available, and prices are the best.

Typically, I book my housing a few months in advance on the app. Depending on the location and affordability, I try to book my stay for one month.

Aside from the reasons already stated, it’s less stressful than moving all the time. I work full-time remotely, so constant moving can be distracting. And this is my life; I want it to be relaxing too.

Safety as a Solo Female Nomad

Traveling solo, I worry about safety a lot. I’ve had an experience when I was camping alone in my van in an isolated place and a man has made me uncomfortable enough to leave my location.

Other times I’ve felt exposed by myself in an area without anyone else around for miles.

The places I rent are carriage houses, garage apartments, cabins, and mother-in-law suites, so the hosts are usually onsite.

You can rent investment-property Airbnbs where the host doesn’t live on-site, but I typically don’t.

Having Someone within Shouting Distance

They’re more expensive, and if I ever have an accident or injury, I like having somebody within shouting distance.

On the flip side, being a single gal, sometimes the hosts want to befriend me, or they feel I must be lonely and want company.

Depending on the type of person you are, it’s a pro or a con, but if you’re a loner like me, dodging invitations can be tricky when you’re sharing the same property. Hosts have invited me to dinners or activities at many of my Airbnbs.

I don’t dodge them all; I’ve made a few great connections and still keep in touch.

Even though I’m not big on hanging out for dinner with most strangers, I’m glad for the opportunity Airbnb presents for us to do so.

There aren’t many ways for people to find themselves in proximity where an impromptu dinner and getting to know each other is even possible.

Other hosts have given me eggs from the henhouse, a fish caught that day, apricots picked from a tree in the yard, flowers from their garden, fresh-baked bread, raspberries, and avocados still warm from the sun.

I’ve pet or admired their dogs, cats, ducks, bunnies, goats, kids, deer, and one armadillo. You just don’t get that staying by yourself in a van or anywhere else.

One potential downside with Airbnb, or probably any similar app, is that I’m dependent on the host to provide the housing as advertised. I’ve had two cancellations in the last year; one, I initiated mid-reservation, and another canceled on me a week before.

I take some blame in the first case. But, in my defense, most people would agree that the property became unlivable by usual standards.

Two weeks into my four-week stay, thousands of silkworms invaded my San Antonio, Texas cabin. It was so bad I was sweeping them off the cabin in piles hourly.

The bathroom was in a separate unit, so I had to walk through trees filled with them day and night. I left and the host, who said it was the worst she’d ever seen, refunded me within the week. Still, it left me without a place to stay for two weeks.

The other cancelation was in northern California during wildfire season. Being a total rube about “fire season” (another thing I learned), I did ask the host, three months in advance, if fires would be an issue and she said no.

Sadly, fear of a fire was an issue, and one week out, the host canceled. I had to scramble for last-minute, higher-cost accommodations.

Sometimes I’ve had to wait for a host to give me keys or decipher obscure entry instructions. Often, I struggle to work the heating and cooling systems if I’m able to control them at all.

Once I didn’t have plumbing for several days while they repaired a well. That was awful. These things happen when you’re staying in individuals’ homes.

Unlike hotels, they often don’t have another place to put me up, and you can get stuck living with whatever happens or the inconvenience and cost of changing plans. Luckily, bad things are rare.

It’s not always predictable to rent places from strangers through an app, but it’s always interesting. Most often, I’m pleasantly surprised. A recent place I’ve stayed had alpacas and that was fun.

If I could have coaxed one into my van, he’d be sitting next to me right now and I’d learn to weave a blanket with his hair. Alas, he was non-cooperative.

I could have never lived as a nomad before Airbnb, the shared economy, and remote work became commonplace. It’s a daily adventure filled with interesting people, places, and things.

We often hear from foreigners how they can spot an American because of our commonalities, like white sneakers and red solo cups. Haha, I kid.

But I’ve learned that we’re also infinitely unique across our country. The dialects, food, culture, clothing, and even houses in each region are diverse.

The people of the south are vastly different from the western states in manner, style and sensibility. The food in New Orleans is unlike anything I’ve ever encountered in the Midwest.

I’ve discovered at least one new plant, tree, or flower in each state I’ve visited that I’d never even heard of before. It’s amazing.

I’m making my way through the east coast and maybe Canada or elsewhere. There’s still a lot to see. The great thing about Airbnb is it’s everywhere people are, and it’s always going to be an experience to remember. 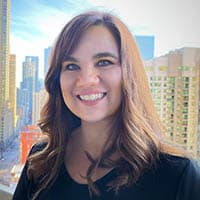 Originally from Detroit, Rene Cizio is a writer, author, and nomad currently traveling in the United States. Follow her at www.middlejourney.com.