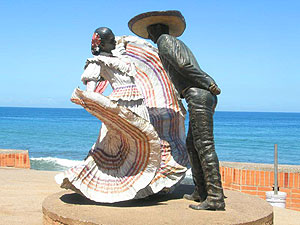 Drug dealers and kidnappings and attacks, oh my!

In late February, the U.S. Department of State released a travel advisory for travel in Mexico. Though the advisory specifically discussed large cities along the border, the American media’s reporting tactics have targeted the entire nation.

Surely there are dangerous areas in Mexico, but when I visited the west coast city of Puerto Vallarta and its surrounding towns, I felt safer than I’ve felt in many American cities.

Resorts have sprung up and unfortunate tourist traps for docked cruise passengers do exist, but at the core of it all lies a hidden, authentic Mexican experience with a contemporary twist.

Playwright Tennessee Williams wrote The Night of the Iguana, a tale that takes place in an idyllic Mexican town, in Acapulco. When the time came to shoot the movie version, filmmakers returned to Acapulco and found its original character had been drastically altered by tourism. 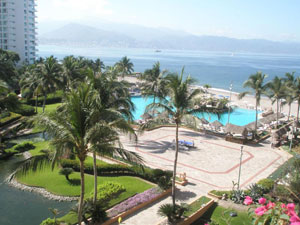 A view of Banderas Bay

At the bottom of the hilly landscape is an artsy boardwalk known as the Malecón. Though it is bustling with tourists and catcalling vendors, the Malecón is filled with fantastical sculptures created by noted artists from the state of Jalisco, making it a must-see location.

In a city where tourism employs roughly 50 percent of all residents, El Centro and the Malecón radiate a special aura. They are a mix of a classic old town and a newly thriving community that has enough spunk to attract more than foreign tourists. After all, 49 percent of all travelers who visited Puerto Vallarta in 2008 came from other parts of Mexico. 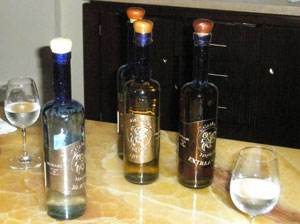 The Casamagna Marriott has made its own brand of tequila for three years.

I landed in Puerto Vallarta with a slight cold. Thankfully, there was plenty of tequila around to clear my senses.

Americans have gotten a rough deal when it comes to tequila. The drink comes solely from the agave plant, if you get the good stuff. Unfortunately, any company with at least 51 percent agave in their bottles can market it as a product made of 100 percent agave. Jose Cuervo Gold, a bestseller in the United States, is one of the most frequently discussed offenders.

According to tequila expert Audrey at the Casamagna Mariott Resort, tequila is consumed like a fine wine. Take sips, swish it around in your mouth, and appreciate the mellowing of the tequila as you make the progression from Blanco, the youngest form of tequila, to Extra Añejo, the oldest form. 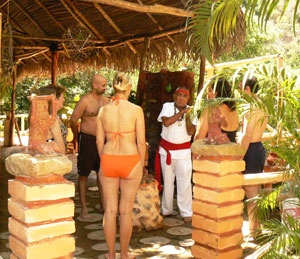 Near the village of Mismaloya, the local family-owned Don Crispin Tequila Distillery doesn’t care how quickly you drink your tequila as long as you keep it pure.

“You take your tequila and put it in cocktails with ice and salt and sugar, and then you wonder why you get a hangover,” Adrian, our distillery guide, said with a smirk.

The distillery offers complimentary shots of their regular Don Crispin tequila as well as their Doña Beatriz flavored tequila, named after the first generation in the business, and bottles run at a fairly inexpensive rate. Unfortunately, their tequila is only available in Jalisco.

The family that owns the Don Cripsin Tequila Distillery also has another venture not far up the road called El Eden. Its claim to fame is that this home of canopy zip line tours and a scenic restaurant served as the set for the 1987 film Predator, but the most intriguing part of El Eden is perhaps the least advertised. 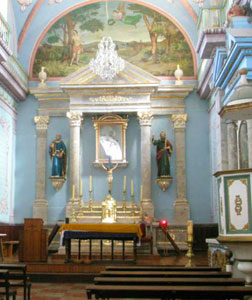 Inside the San Sebastián Church

In a hidden nook at the edge of the attraction sits the Temazcal at the Spa Mayahuel.

The Temazcal is an ancient ritual that uses nature’s elements to make participants feel balanced and optimistic. There are many forms of the Temazcal, but Spa Mayahuel follows the Aztec ritual indigenous to Mexico. The traditional Temazcal lasts about four hours, but we opted for an abbreviated one-hour version.

We were greeted by a perky Shaman who introduced himself with a toothy grin and the phrase “No worry! I learn English in Alcatraz!”

We gave our herbal offerings to Abeulo Fuego (Grandfather Fire), became one with the Earth by covering our bodies in red clay and lying out in the Sun, and washed off in cool water before heading into the actual Temazcal.

The small, rounded sweat lodge represents the mother’s womb, where we sang with joy and inhaled the sweet scent of eucalyptus. The steps taken are believed to bring peace to the individuals involved and ultimately make them better people. 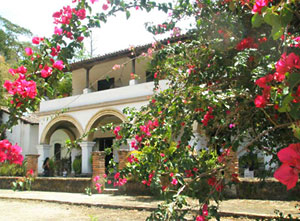 An hour and a half away from Puerto Vallarta is the old mining town of San Sebastián. High in the Sierra Madre Mountains, San Sebastián provides a perfect getaway for adventurers who want to get away from it all.

San Sebastián has not yet become a regular tourist attraction, to say the very least. The access road was only completed about three years ago and visitors could only reach the area by small aircraft before this time. With no electricity and only a few restaurants that have sprung up over recent years, the town offers perfection through peace and quiet.

A small line of shops along the square represent the town’s center. The most luxurious building in town is the church. Some residents speak English, but most don’t. 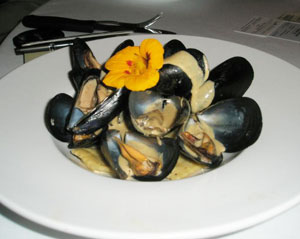 Mussels and Ravioli in an Oyster Cream Sauce at La Leche

The most charming lodging in the area is at Hacienda Jalisco, about five minutes outside town. Once a mining facility, the small guesthouse has served as an oasis for travelers desiring an authentic experience.

With the exception of an area that once caught fire, the hacienda is rooted in its traditional decoration, unpolished wooden floors and all.

“They aren’t all over the place, so we’ve learned to adapt to the termites,” said Joe, the owner. Don’t let the termites and chilly nights make you weary — Hacienda Jalisco has enough to compensate for them.

Historical mining equipment and artifacts, and loan documents tracing back to the first family to own the property are available for all to see. Almost all the food served on site is grown organically in their gardens. 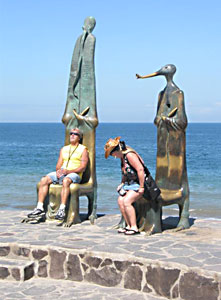 The sculptures on the Rotunda of the Sea serve as a rest stop along The Malecon.

Guests gather around nightly bonfires. And yes, there’s the Richard Burton Suite where the actor once stayed with Elizabeth Taylor.

For several years, Nacho Cadena was the owner and head chef at La Petite France, the premiere French restaurant in Puerto Vallarta. Just as he was ready to step down, his son, Alfonso Cadena, was ready to step up.

The result was La Leche, a highly stylized restaurant which has quickly become a favorite since its opening about six months ago. Inside La Leche, the whole world is white. The only exception is the large black chalkboard wheeled to each table that serves as a menu — since the restaurant changes its menu every night based on the fresh local foods available to them. It’s more than a meal. It’s an experience.

For dessert, I encourage you to wander over to Dulces Tipicos Mexicanos con Orgullo Azteca, a shop in the heart of El Centro. Owner Gerard Munoz creates delectable treats native to the state of Jalisco, where Puerto Vallarta is located. From candied pecans to chocolate delights, you’ll be happy with what you see. 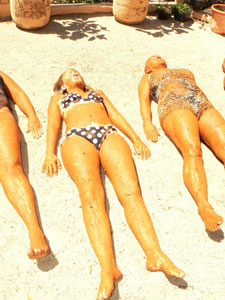 Covering yourself in red clay and resting in the sun represent becoming one with the Earth in the traditional Aztec Temazcal ritual.

Puerto Vallarta maintains a high number of swanky resorts, but there are also plenty of boutique hotels worth a look. 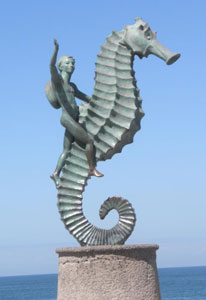 The Seahorse by Rafael Zamarripa, the most prized piece of artwork on the Malecon