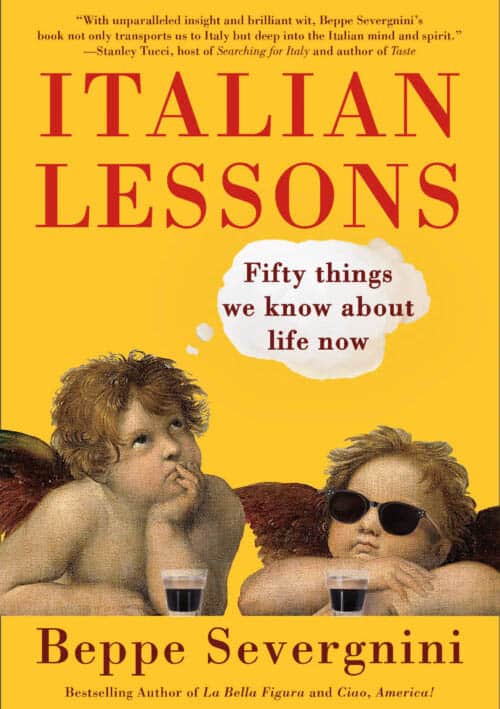 Is there an Italian way to deal with life? Can we all learn something from the Italians? Ten Questions for Beppe Severgnini from Anthony Shugaar

From the Italians’ love of poetry to an innate desire to socialize to the regional differences between the north and the south.

Beppe Severgnini, who has dedicated his career to the meticulous observation of his compatriots, embarks on an enthralling quest to identify a core Italian identity and explore how that identity has evolved since the global pandemic.

Told with the warmth and humor of a longtime friend, Severgnini touches upon patience, endurance, and wisdom, and offers a one-of-a-kind set of timeless lessons for overcoming trials, the Italian way.

In a thoughtful, intimate, and often humorous look at core Italian values held up and reassessed in the face of a global pandemic, Beppe Severgnini offers a delightful series of lessons on handling challenges and living with joy.

In a thoughtful, intimate, and often humorous look at core Italian values held up and reassessed in the face of a global pandemic, Beppe Severgnini offers a delightful series of lessons on handling challenges and living with joy.

Antony Shugaar has translated two books by Beppe Severgnini. He is a writer and a translator and the American editor of FMR magazine.  He lives in San Diego. Below is his interview with Beppe Severgnini. Years ago an Italian friend who had worked for IBM Italia told me that Americans do well in big, corporate systems with clear rules and predictable outcomes, while Italians are better suited to multinational companies where the unpredictable is the order of the day. In short, Italians are at their best in pure chaos, where abstract rules are useless and you must deal with raw reality at its most challenging. Does this sound accurate to you?

There is some truth to it. But the new Italians — the Italians who can teach something to the world — know how to combine both things. They understand how to operate in “big, corporate systems with clear rules” and they also know how to manage the unpredictable.

That intuition and that ability to think fast, combined with reliability and precision, make us strong (I stopped short of saying: unbeatable). Intuition and rapidity, by themselves, tend to alarm non-Italians. And I can understand.

You talk at one point about Maria Montessori. Italian educational systems range from the very abstract — philosophy in high school, Dante in middle school, Latin and Greek as regular fare — and the Montessori system, which so deeply rooted in the immediate and the creative.

I attended a Montessori preschool, and it was a wonderful education in self-sufficiency, sociability, and self-discipline.{OK??} I think it helped me greatly.

In my Italian “classical” high school I studied Latin and ancient Greek, which are fundamental tools for learning how to think. Concrete details? {Le nozioni?} There’s time for that later.

In “Christ Stopped at Eboli,” Carlo Levi wrote about the surprising worldliness of even peasants in Southern Italy. Can you address the internationalization of Italian culture, a contradictory composite structure of the parochial and traditional with a far-reaching cosmopolitanism found even at the lowest levels of society.

“Italy is the land of human nature,” wrote an American traveler nearly a hundred years ago. I think I know what he meant. In Italy, spirit and deeds often travel side by side: the results can be wonderful (the films of Federico Fellini) or disastrous (Fascism).

I was struck by your piece about how Italians “see you,” while other cultures simply look at you. I have loved Italy and Italian way since I was barely out of my teens, and this seems instinctively very true. Can you talk about the Italian way of seeing with clear eyes, not “through a glass darkly,” but more as what Robert Warshow called “the immediate experience”?

We Italians see our fellow humans — we don’t just limit ourselves to looking at them — for many reasons. Curiosity, the need to gather intuitive elements, compassion — generosity and a taste for the theatrical (those two things often go together). Also the desire for seduction (personal or sexual, the former being more common and less fraught with complications than the latter)


Your first 5 reasons are contradictory, even paradoxical. Instead of losing cool, Italians find strength; vulnerability vs. toughness; serious but unwilling to admit it; unpredictable but not unreliable; gallant but not well behaved. Why this unpredictability of the Italian character? Is it because Italians are an older culture, one that has distilled out certain naive rules, and so they seem unusual in a world of less “immediate” cultures?

We Italians are contradictory for many different reasons. The most important reason is historical: we’ve been invaded so many times, and we’ve had so many masters that we love to confound those who would judge us. It’s a form of self-defense. And it’s our national sport, even more than soccer, where we have our ups and downs (champions of Europe in 2021 but failing to even qualify for the 2022 World Cup — so typical!)

You explore the differences between different parts of a country that’s barely two-thirds the size of the state I live in, California. North and South, Milan, Rome, and Sardinia. And yet Italy has thousands of years of civilization; as both Oscar Wilde and Gandhi might have joked, California hopes to get civilization soon. Could you talk about the depth of Italian polarization? It almost feels as if there’s a smaller model of a much larger world in this mountainous, beautiful, very narrow country surrounded by blue water.

For better or worse, southern Italians are Italians squared: more cheerful, more intuitive, perhaps more intelligent than we northern Italians; but often shrewder and more unpredictable. Still, Italy exists as a country: it’s a matter of common denominators. I’ve found fifty of them — “Fifty things we know about life now” — and chose among the positive ones. Make no mistake: Italy exists and the Italians exist.

They live in Palermo and Turin, Rome and Venice, Milan and Sardinia. But that’s easier for someone to understand who comes from Oslo (Norway), Osaka (Japan), or Orange County (California) than for us in Italy. Walking through the trees, you might not glimpse the forest: you only notice the differences between the tree trunks .

People are surprised to learn that the latitude of Naples and New York City are both 40 degrees north, almost exactly the same distance from the Equator. What’s more, the odd spelling of Neapolitan points to the origin of its name: Neapolis, Ancient Greek for “New City.” Hidden in these similarities is the fact that Naples was part of Magna Graecia, a capital city on a seacoast founded by adventurous sailors exploring to the west, just like New York. Bear with me: I have heard people refer to both Italy and New York as places that were once futuristic. Could you explore this combination of the very old and the very new in our two cultures?

Italy and New York both have a courageous culture — speaking socially, entrepreneurially, culturally — verging on arrogance. It’s no accident, perhaps, that the Italians found themselves so at home in New York in the twentieth century, and beyond.

I wrote about Berlusconi when I first worked as a journalist in Italy, covering advertising and the media. Around the same time, I remember reading about the beginning of Trump’s cult of fame, but it’s lasted much longer than the canonical fifteen minutes. Could you talk about the similarities between these two unlikely figures? For a long time, the only two comparable figures were Berlusconi and Trump — now it seems like every country is getting its own variation on the theme.

The similarities between Donald Trump and Silvio Berlusconi are striking, and many have noticed them. Both are loud, vain, cheeky businessmen, amateur politicians and professional womanizers. Both have a troubled relationship with their egos, their hair, and their tax authorities. Both think God is their publicist, and twist religion to suit their own ends. 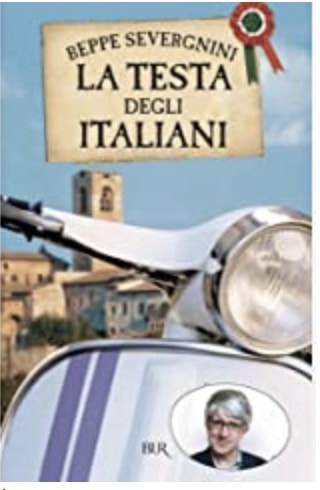 There is a difference, though. Silvio Berlusconi was the longest-serving Italian head of government since WW2 (not much came out of it, apart from a troubling friendship with Vladimir Putin). But he believed in the European Union and the Atlantic Alliance (NATO). I never voted for him, but he accepted the rules of democracy (well, most of them). The US was his inspiration (television, advertising, even political approach). Donald Trump is accused of trying to subvert American democracy. Shall I go on?

Italy was also the first country, or perhaps the first fully Western country, to be hit by Covid. Was there something distinctive about Italy’s pioneering reaction? Did it serve as a model for other countries? Were people singing on balconies the first note of hope, followed only a year later by the vaccine?

The fifty reasons for being Italians — or lessons, if you prefer — are not a hasty simplification. They constitute the pillars that hold up our very coexistence, the foundation upon which we have built a significant past and we can try to construct a better future. Those pillars have continued to weather storms, and have even withstood the Covid tornado: and they have saved us.

They include a good national health system. Well tested family relations, functional social structures, the configuration of our cities, underlying generosity, empathy, imagination, and an absence of resignation: Italy has seen far too many things, over its centuries and millennia of history, to raise the white flag in the face of an epidemic.

Even the care we lavish on our homes, which may sometimes seem obsessive, has become a welcome and salutary distraction. Our love of cooking—and, why not? our love of wine—has proved to be a blessing. Two good meals a day are a balm for both body and soul.

Can we really learn something from Italy?

You should. And we ought to learn from you. That’s how we all get better.

Beppe Severgnini is an acclaimed columnist and an editor for Italy’s largest circulation daily newspaper, Corriere della Sera.  A longtime Italian correspondent for The Economist and a frequent contributor to The New York Times, he traveled all over the world.

Among his books are the New York Times bestseller La Bella Figura: A Field Guide to the Italian Mind, Off the Rails: a Train Trip Through Life, and the international bestseller Ciao, America!: An Italian Discovers the U.S. He lives with his family outside Milan.

“With unparalleled insight and brilliant wit, Beppe Severgnini’s book not only transports us to Italy but deep into the Italian mind and spirit.”—Stanley Tucci, TV host of Searching for Italy on CNN.