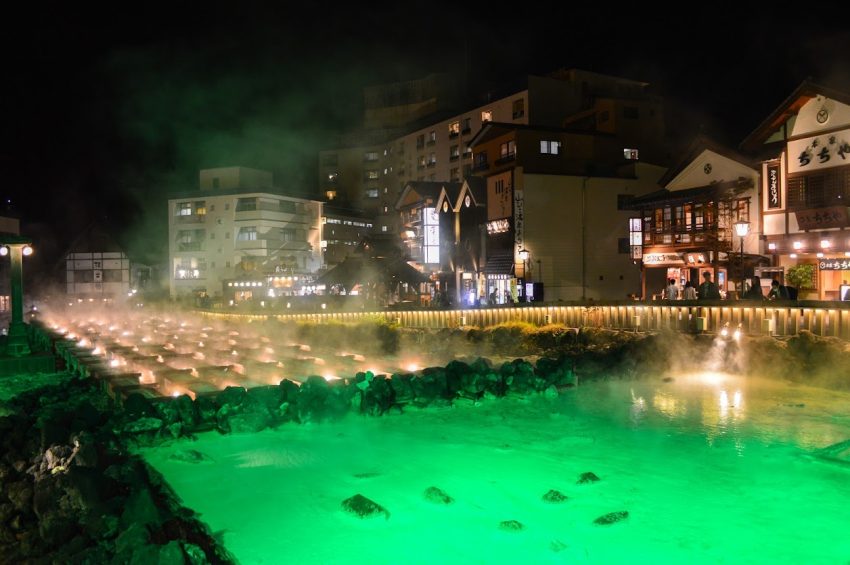 A Town of Geothermic Tranquility North of Japan’s Capital

There I was: on a bench, in a bathrobe; in a town square watching a cat casually clean itself atop a conduit of 70°C (158°F) volcanic water – coating the air with a wicked stench of sulfur.

Yet, there’s a locally brewed alcoholic beverage in my hand, the sounds of young couples giggling, and food stall owners encouraging passersby to try their skewered rice cakes.

How could I and everyone around me be so genuinely enjoying themselves while sitting so literally close to Hell?

Well, Hell is what we’re all here for. In Kusatsu, Gunma, Japan, sulfuric, geothermal springs are how people unwind, and it’s one of the best places to be so easily accessible from Tokyo.

Welcome to Hell in Kusatsu

As was dubbed in Oita prefecture in western Japan, Hells describe the natural hot spring pools too hot to bathe in – only observe. The town center of Kusatsu in Gunma prefecture encompasses such a Hell, with active volcano Mt. Asama as its water source, but this particular pool comes with a cooling tool.

A manmade contraption known as Yubatake siphons the sulfuric water through a series of wooden conduits that pour out into a bright blue pool of hot spring water of a much more pleasant temperature. Just outside the pool, tourists can soak their feet in Yubatake’s benefits – cooled only by stirring without diluting the water. Last fall, my wife and I were doing just that, and we couldn’t wait to see what the rest of the village had to offer.

Having had the opportunity to live briefly in rural Gunma during the height of the pandemic, my wife and I decided to reap the full convenience of living in the prefecture of hot springs (onsen). Kusatsu can be reached in two and a half hours from Ueno Station in Tokyo via a limited express train.

Being locals, we took a train to Gunma’s capital, Maebashi, and luckily ran into the Meiji era replica known as SL Gunma – steam locomotive Gunma. While not the only steam locomotive in Japan, it’s one of particular beauty for train enthusiasts like me. Unfortunately, SL Gunma doesn’t run anywhere near Kusatsu, so it was sayonara for now.

Arriving in Kusatsu, the feeling of walking into a small mountain town is immediate. Almost everything is accessible on foot. The streets are narrow, occasionally stone, and full of old wooden buildings. It’s a town with a chronic case of overcast, which is just what a tourist wants when hopping into a bath heated by the earth.

Coming upon the town center, the source of the sulfur smell reveals itself. While unpleasant to some, the glowing, bright green sulfur pool at the head of Yubatake welcomes newcomers with unique beauty.

There’s always something appealing about looking down into something natural that could kill a person. Luckily, the other sides of the center spectacle won’t. Yubatake is surrounded by foot pools, aged shops and restaurants, and even a very uniquely Japanese 7 Eleven. For being mostly in the middle of nowhere, the square around Yubatake has anything anyone would need.

Staying in a Hot Spring Hotel

With our years as residents in Japan, my wife and I consider ourselves veterans at bathing in public. I do, however, remember it is a sharp learning curve (avoiding all eye contact has been a successful technique for me). All the same, when in Rome, right? Experience all that can be experienced.

We stayed at Hotel Ohruri – a ten-minute walk from the center square. Neither the most expensive nor the cheapest option in the area, the rooms were traditional style (tatami floors, sliding paper windows, etc.) but with an overall older, modern hotel vibe. Like most hotels in the area, it had its own indoor and outdoor spring pumped in from Yubatake.

Finding such an inn is not totally necessary, however. There are several public hot springs in the area that can be visited for bathing only.

Here’s a brief rundown of the public bathing process in Japan for first-timers:

Per the hot spring town expectation, walking around in robes is encouraged. Not only is it comfortable but it’s a symbol of staying locally. Entering shops, restaurants, and convenience stores in a robe is totally okay. Welcome to the world of wearing pajamas all day, every day, everywhere.

The Women Who Rule the Springs

Netsunoyu. This is the source. Well, perhaps Mt. Asama is the source, but the women of Netsunoyu educate the public on the tradition of how the source water is cooled. Throughout the day, tickets are sold for ¥600 (≈$5.38) along with a show schedule for selecting a time.

Once inside, viewers are greeted by a woman in traditional bath wear discussing the process by which Kusatsu onsen is cooled and has been cooled for centuries. “Yumomi” is a term that will often be heard. This describes the act of stirring the water with wooden planks to cool it without altering its mineral properties.

While cold or cool water is often added to spring water to make it a comfortable temperature, the women of Kusatsu display their method through song, dance, and story.

The water is stirred alright and not without entertainment. Attendees could possibly get a little wet in the process. The tradition is a strong symbol of Kusatsu and the main attraction for tourists.

Head deep in the experience, the show had me captivated by the concept. Local culture methods of doing unique things unique ways are all over Japan, and this is just another way of being dipped in the history of an area.

It’s impossible not to end up pruney in this place. Hot water is everywhere, and a massive amount of it can be seen and felt in Sainokawara Park – another ten-minute walk from Yubatake. Here, it can be gotten without rooves or floors. Walking along the street to the park, drainage ditches will start to steam.

The flow will widen into a sandy open space full of hot pools bubbling from the earth – filling naturally. These springs come straight from the ground and sit alongside a simmering stream.

It’s a naturally beautiful scene where man meets mantle – groundwater heated by the magma layer of the earth. A tad hotter than the hotel water, but they still make for cozy foot baths in the cooler months. It’s easy to imagine weary travelers of times past stumbling upon this area and having a well-earned soak.

The path towards the park’s popular open-air bath eventually leads to a waterfall. Yes, a steaming hot waterfall. Such a thing was new to me in every way. Wooden walkways surround the fall with a paved footbath just beside it.

Sitting in that particular footbath was where I let it all go. The fall falling, cool head, warm feet – it was the end. Not only the end of my trip but the end of the pandemic stress I’d arrived with. It was like a hug from an old friend. It was like a new beginning.

While Kusatsu isn’t the only hot spring town in Japan, its natural geothermal surroundings and a short distance from Tokyo make it what should be a prime spot for experiencing what mostly only locals take advantage of. It’s a place of preserved tradition and natural splendor unlike any other.

While finally dropping one’s life savings on a trip to Tokyo is well worth it, remember to experience the humble stillness of the country’s culture.

Although it can be found in tiny doses around the capital, sacrifice some time to become immersed in the natural beauty, mineral benefits, and psychological fulfillment of what Kusatsu has to offer.

Leave having visited Hell and came out nourished.

Start by perusing the KusatsuOnsen tourism site. Check out more information about the limited express train from Ueno Station here, and weigh the best hot spring hotel options on Booking.com.

Guess what! There are ever-streaming live videos on YouTube of Yubatake here and here in case you want to check the weather. Live streams of Sainokawara Park can be found here and here as well! 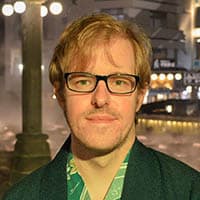 Richie Henry is a southern Mississippi native living and working in central Japan as a high school teacher. His passions are music, literature, photography, hiking, and experiencing as much of the world as he can. He can also be found at unfilteredasia.webnode.com